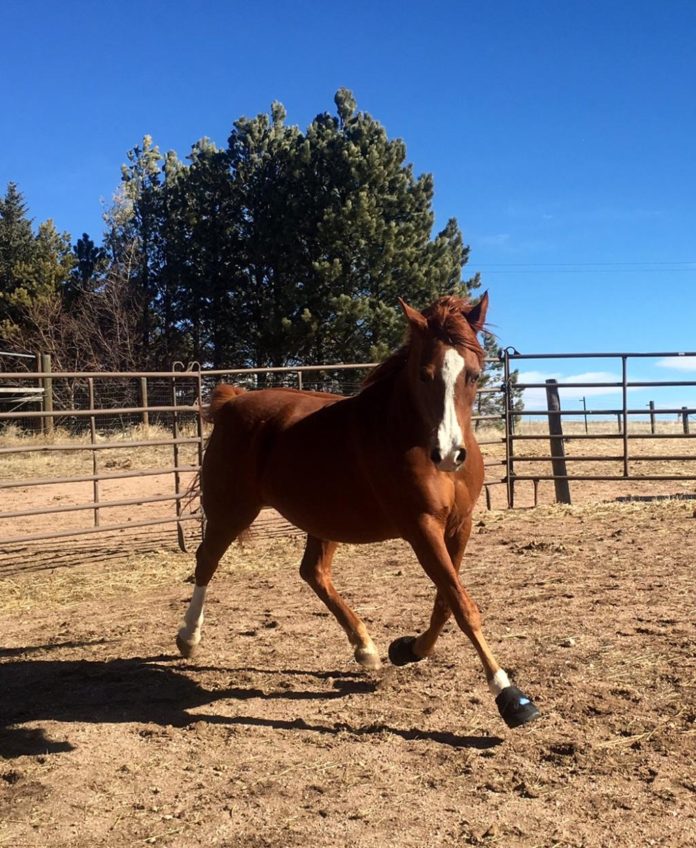 The Easyboot Glue-Ons are certainly a marvelous invention. From the beginning we had a great product, but we had to learn how to use them properly and how to apply them correctly so they stayed on even under the most extreme conditions. Meanwhile, Easyboot Practitioners have refined the gluing process to an art and getting the boots off the hooves even after they been ‘on’ for a few weeks can be quite a chore. Which is, of course, a good thing, because it proves to everybody that the gluing application has matured. 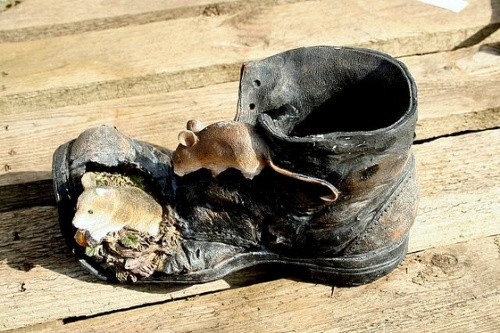 EasyCare recommends to pull the Glue-On boots after ten days to two weeks.  I have to admit, I often do not adhere to these these time recommendations and keep them on somewhat longer than that. Maybe I shouldn’t, but when the seals are still intact and the boot well attached with no water having entered the boots, I stretch this time line. And yet, I’m always amazed how hard the hooves still are after I pull these Glue-On Boots off my horses hooves. I have not noticed any thrush developing under the boots and most of the time they are a ‘mother’ to get them off, even after hundreds of miles ridden and several weeks having passed. Yes, they are softer compared to the bare footed horses running around in dry sand. But certainly are not any softer than a bare hoof that travels and lives more in a wetter climate and muddier soil than we have in the desert southwest.

Notwithstanding those observed facts, I cannot help to wonder sometimes if it would be better to have the sole exposed to more natural soil, sand, rocks and air to keep it dryer and tougher.

Time to experiment and play. 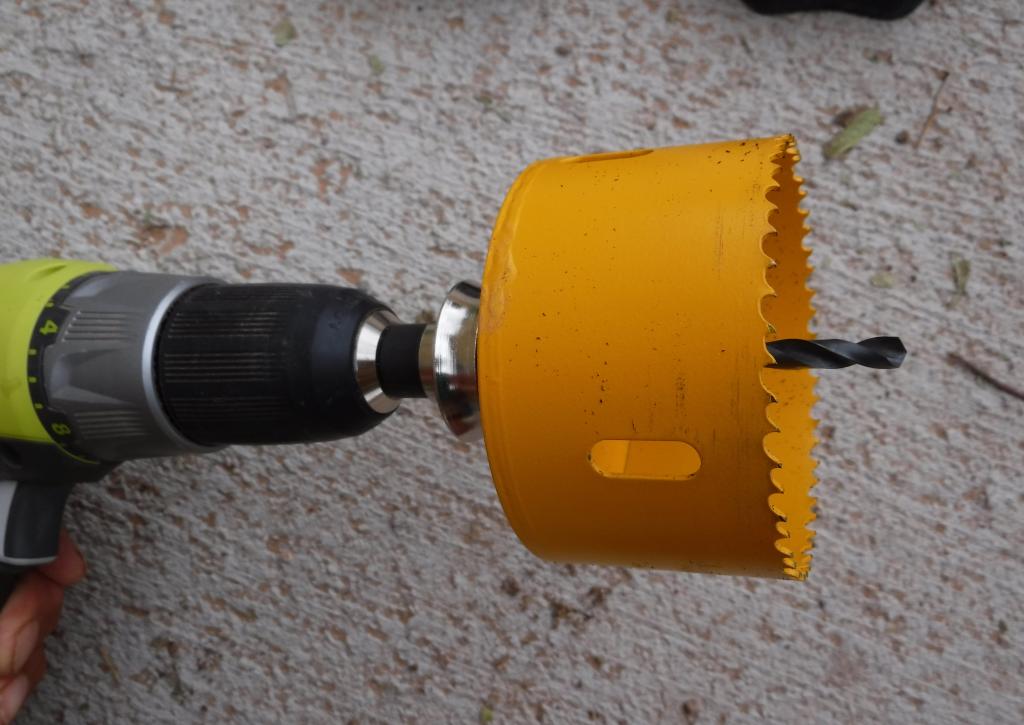 I pre-drilled a small hole in the center of the Glue-On so that the hole drill can stay centered: 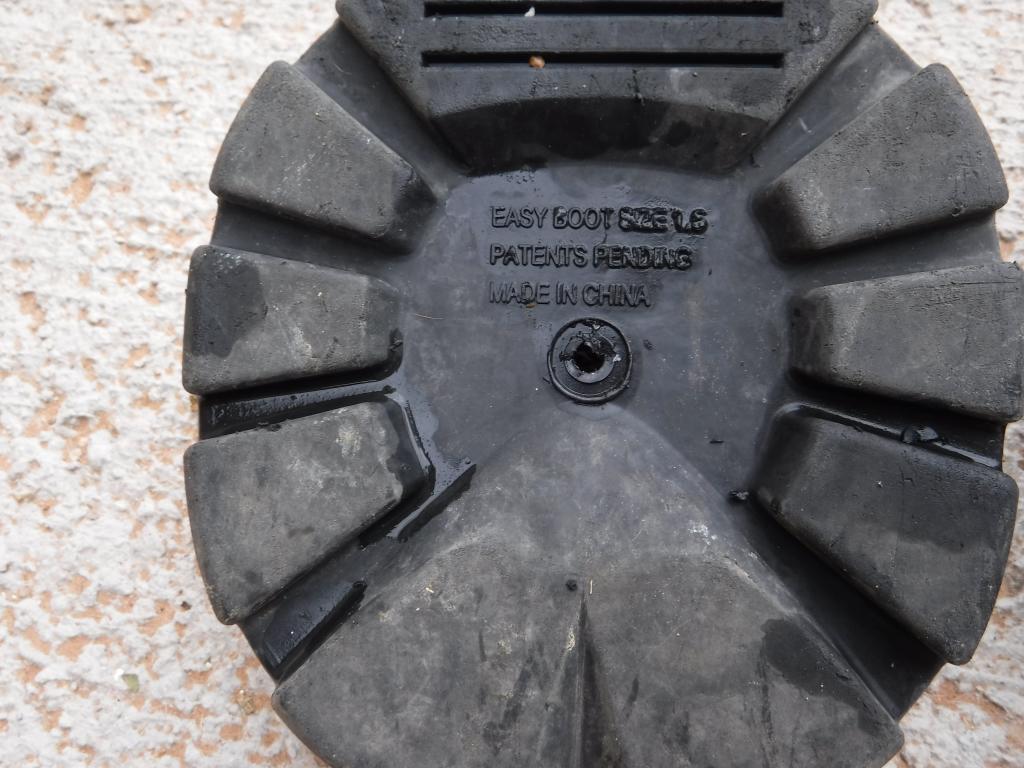 While drilling the hole, the boot has to be fixed, otherwise it will spin around and the circular saw won’t be able to cut. The best way for me to stabilize the boot was to hold it between my feet. 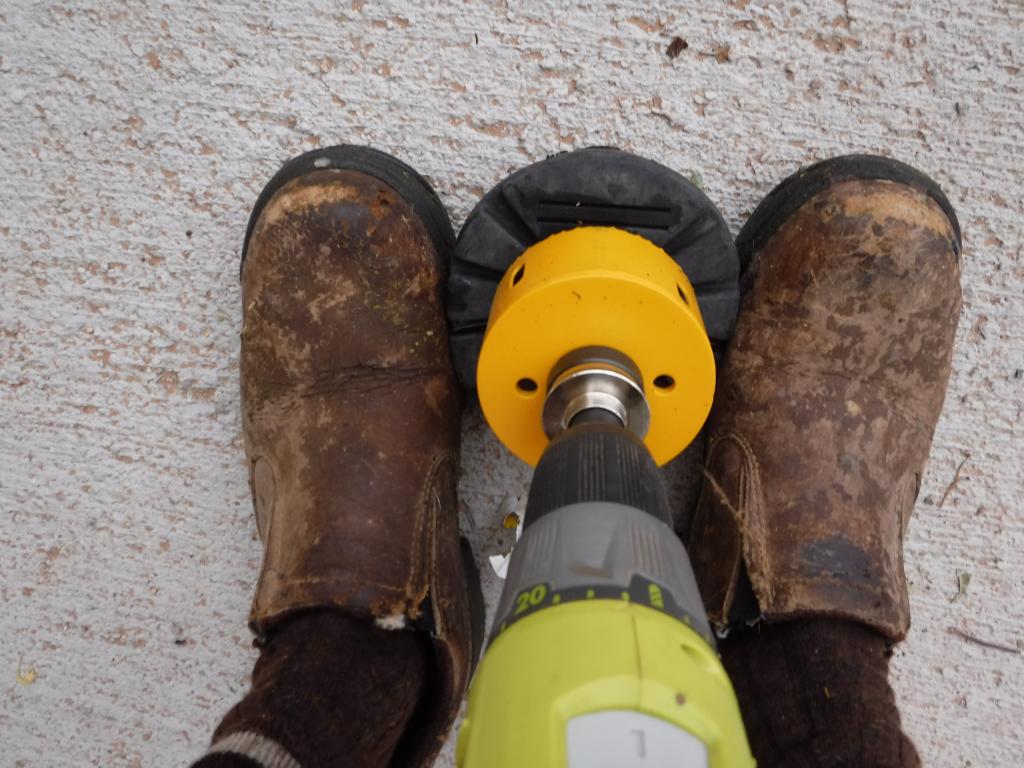 The sole of the Glue-On boot is rather thick, so it will take a little time. Too much pressure on the drill and it will not cut anymore but get bound up and stuck and jerk your arm. So better use light pressure to allow the tool to do the work. 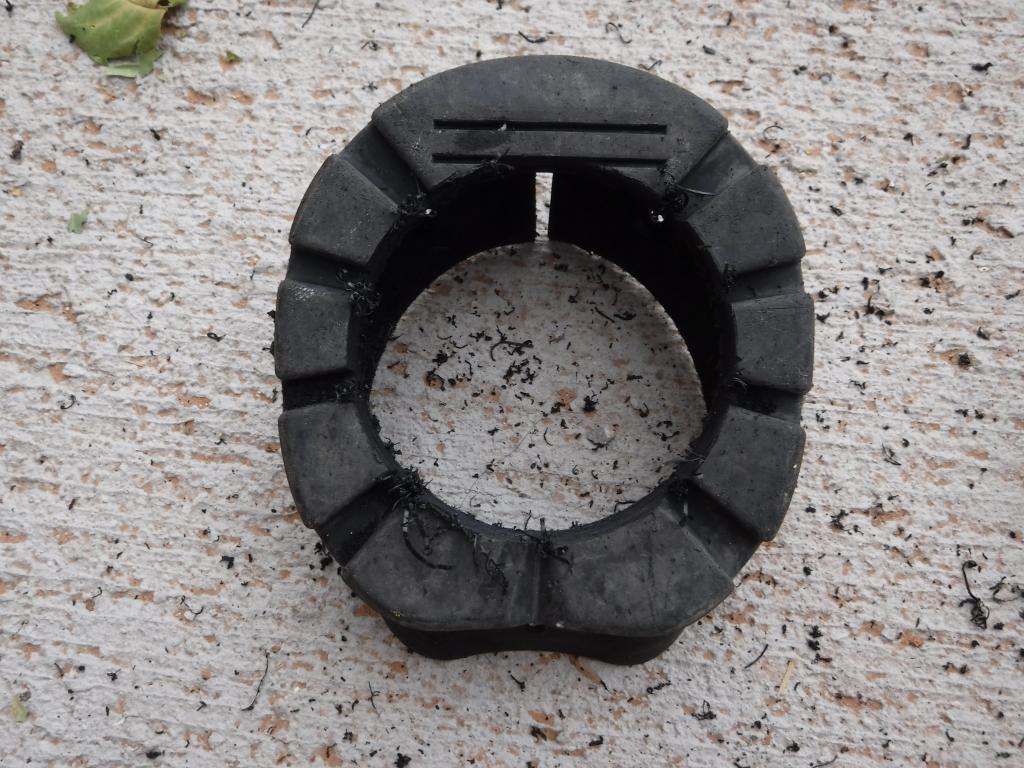 The modified Glue on Boot with a hole in the bottom.

The sole thickness of the boot is indeed impressive, here is the cut out piece. The Gloves and Glue-Ons certainly have a thick sole, that’s the reason they last so long and protect the soles so well. 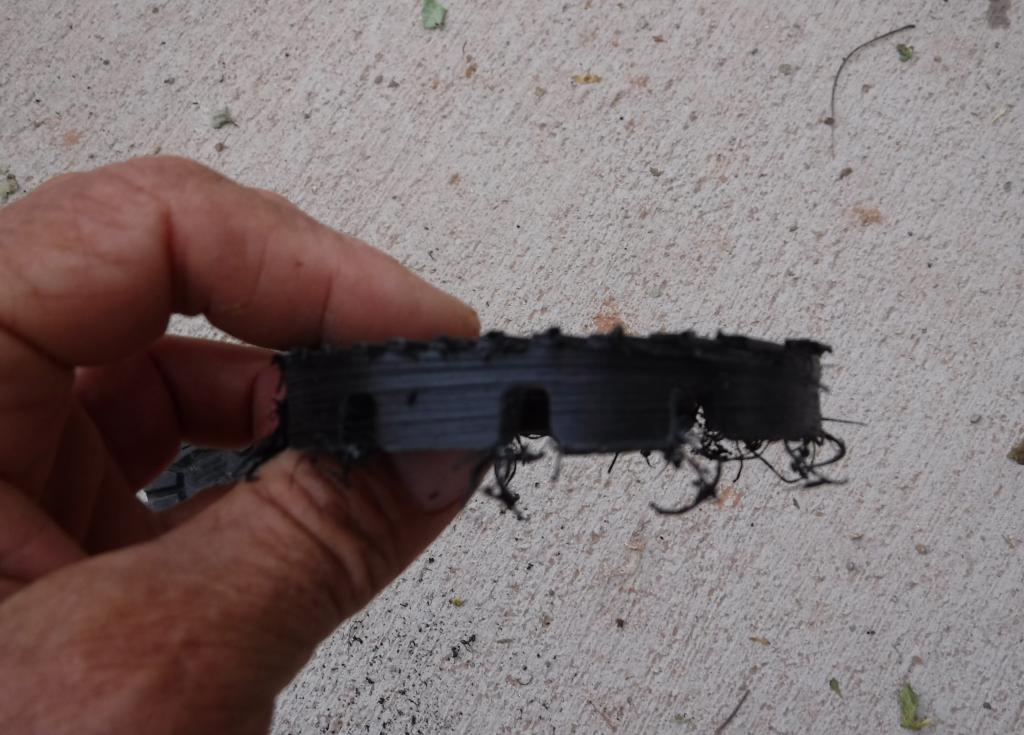 Hoof preparation is being done identically the way we glue a boot without holes.

For gluing the boot I used Sikaflex the same way as I normally would for a complete boot. I just need a lot less of it this time. 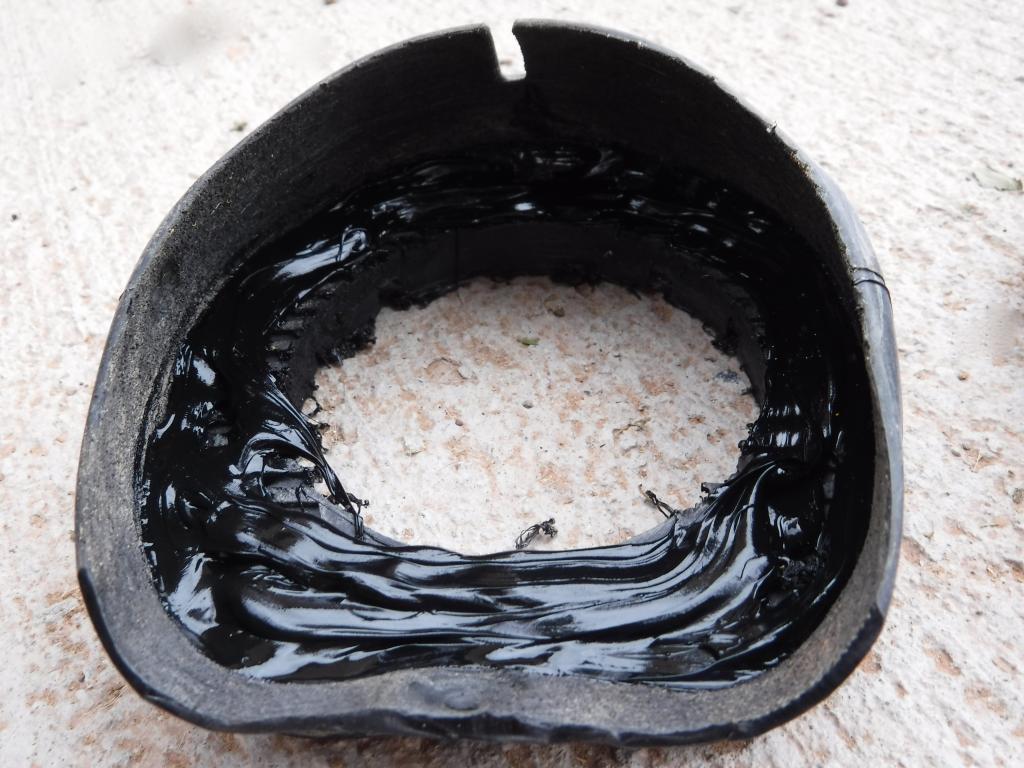 Vettec Adhere is being applied afterwards to the inside wall of the boot and the boot then being glued on according to protocol published on the EasyCare website.

In the sole area I use the excess Sikaflex to seal the cut borders. 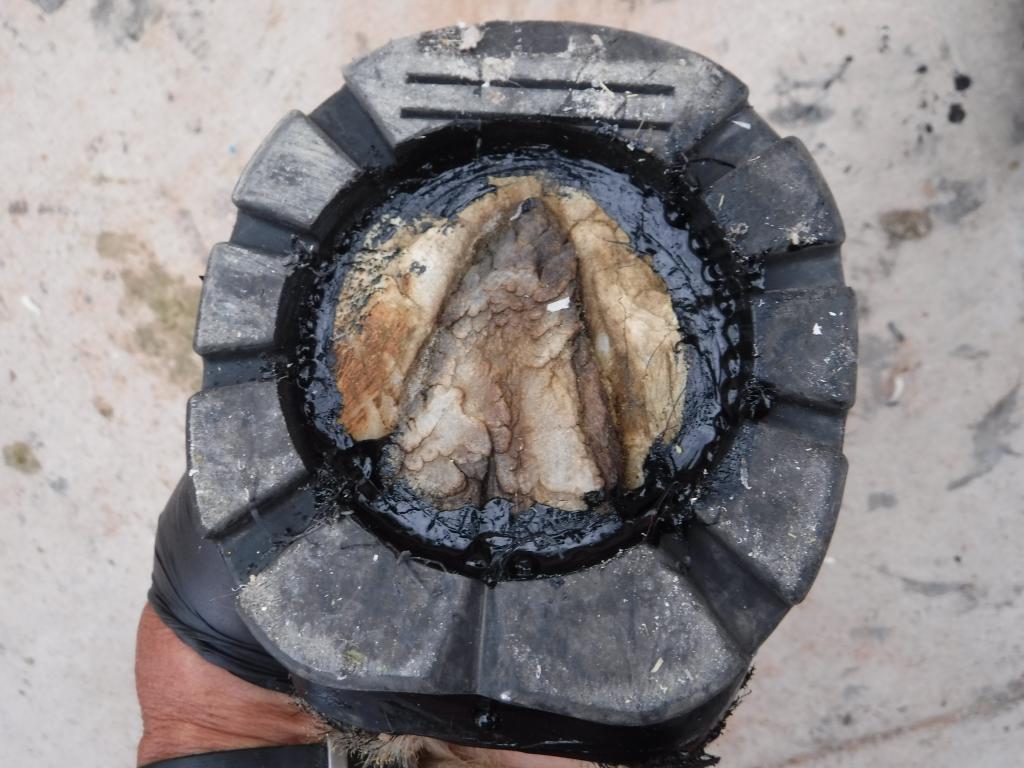 Most of the frog and sole is now exposed, keeping the sole and frog tough and hardened.

The foremost question in my mind was: did I rob that boot of essential stability and compromise the integrity so much that it will fall apart and get ripped off in no time? Only time and frequent riding over mixed terrain will tell me.

In my first try I cut the hole too big and, sure enough, the toe part of the boot sole was pushed over the dorsal hoof wall within 20 miles ridden.  The boot pictured above is a size 2 and I used a 3.5 inch diameter hole saw. That hole seemed the appropriate size, leaving a wide enough sole margin.  I therefore came up with the following hole sizing chart (this is what has worked for me):

With these sizes the boots have stayed strong enough to withstand heavy and fast riding over mixed terrain.

After 4 weeks of riding this horse, the margins and borders are all intact and the horse is moving happily and freely. 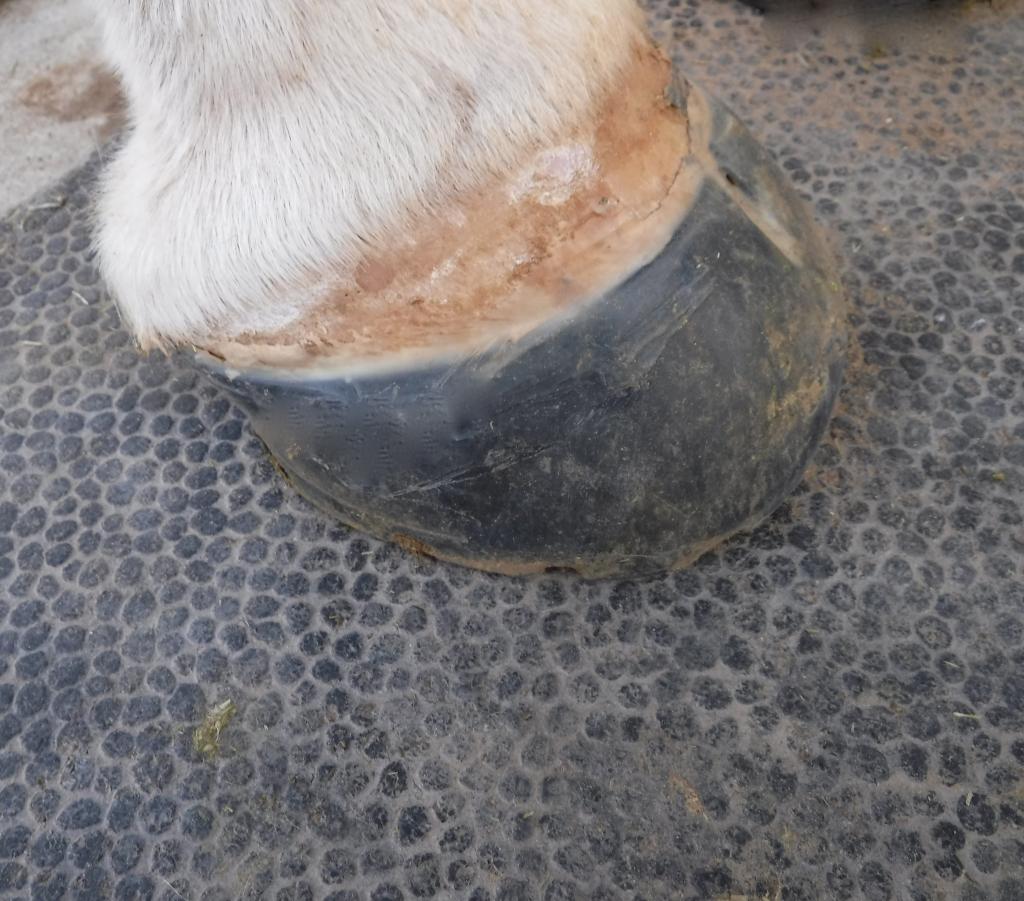 Next photo from the bottom side: 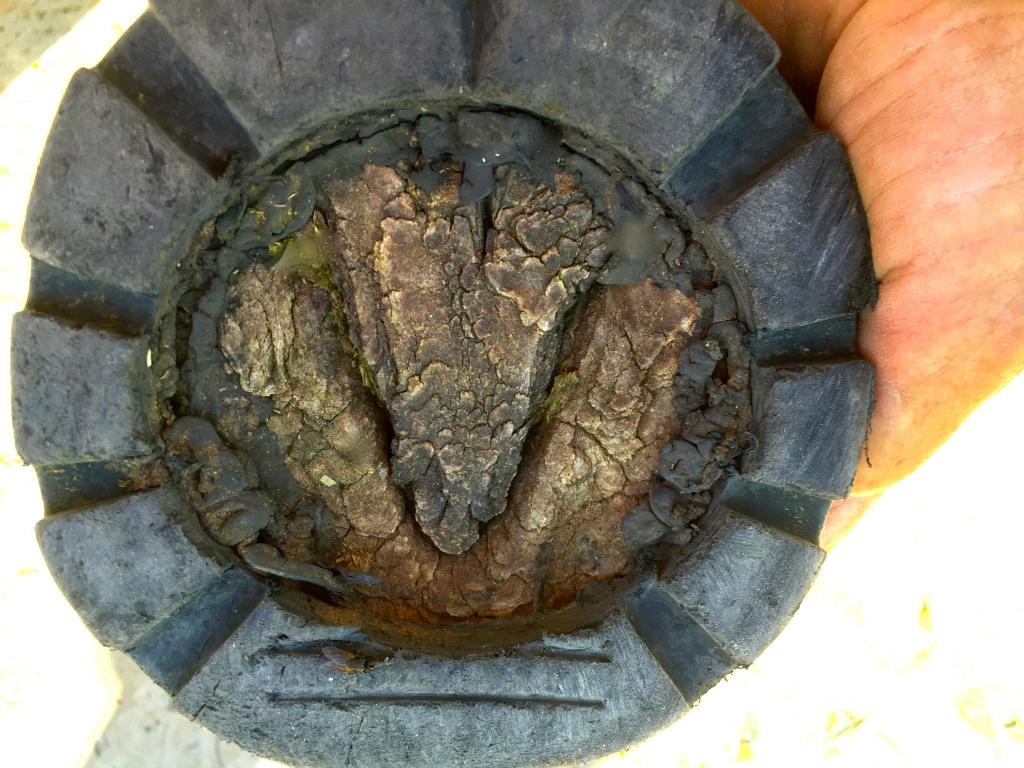 The frog and sole did toughen up more, more dead sole visible compared to the frame above 4 weeks ago. The horse walked before the Sikaflex had completely been dry, that is why some of it had pushed out from under the sole, but that did not create any issues.

Summarizing why such a foolish undertaking could benefit the hooves:

– Continuous sole and frog stimulation and toughening through contact with ground

– Longer time intervals before pulling the boots, possibly up to 6 weeks

I might not elect to use this modification for endurance rides or riding a lot over sharp and hard rocks. The risk of stone bruising is certainly greater. For moderate terrain and training rides it seems to me to be a viable alteration.

To give credit where credit is due: this ‘Hole in the Boot’ idea did not originate with me. I saw it first while attending one of the Pete Ramey Clinics in Durango and considered it worth a try and to experiment with. Pete had a couple of the boots with holes cut out on display.

So far, I must say,  I’m happy with the results. 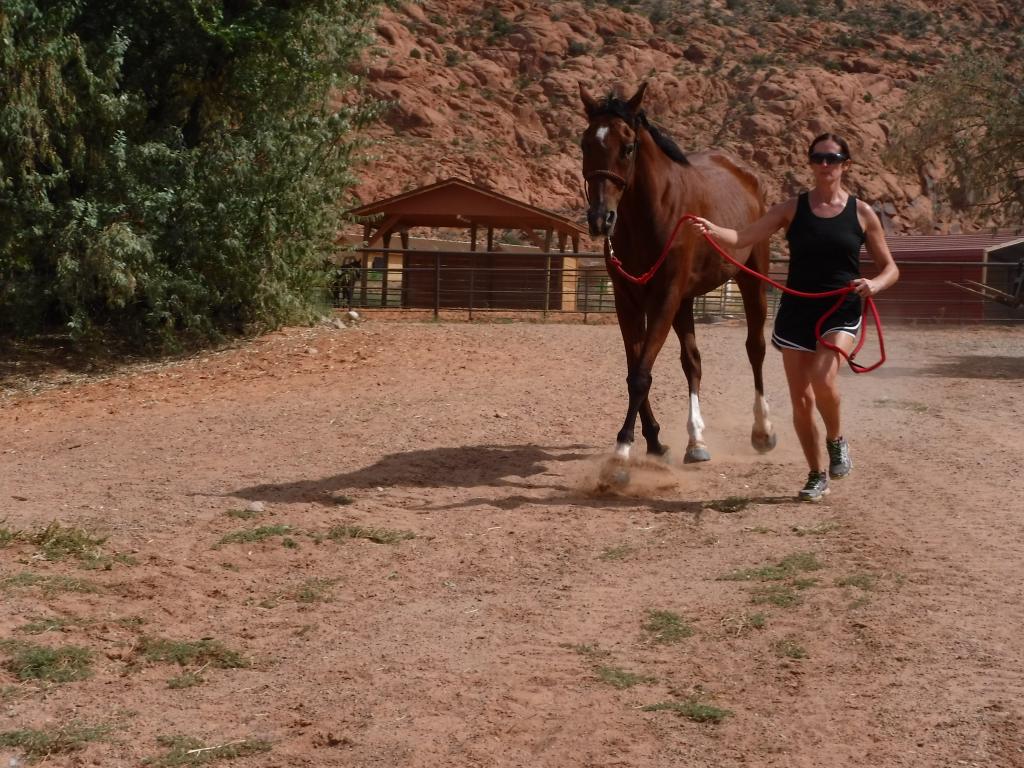