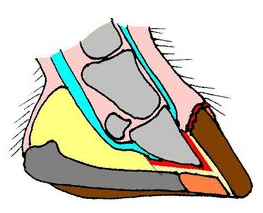 What does it actually mean, that often heard advice by farriers and hoof trimmers, natural, bare and otherwise:

“Trim your horses heels to the widest part of the frog!”

Easy, just do it!

What is the importance of that heel landing and why does a short heel help with that?

Looking at the anatomy of a horses hoof, we can clearly see that nature intended a horse to land heel first:

Can we draw the conclusion from this simple image that the horse is not intended to land toe first?

(Of course, when we talking about heel landings, we are considering only level ground. Any horse climbing steep hills will, just like humans, get ground purchase by digging in the toes first.)

Dr. Robert Bowker, Professor of Anatomy and Director of the Equine Foot Laboratory at Michigan State Univeristy believes the heel area of the hoof is THE most important part of the hoof. His studies focus on the hemodynamic flow theory, which proposes that blood flow through the network of tiny capillaries the in heel region plays a vital role in shock absorption. He also discovered the proprioreceptor sensory cells in the heel region who transmit information to the horse’s central nervous system and allow to ‘feel’ the way across the ground.

A hoof capsule will always grow forward at  the same angle as the dorsal hoof wall shows in the upper half. With time then, the heels will have grown forward as well and will not be at the same level as the frog anymore. 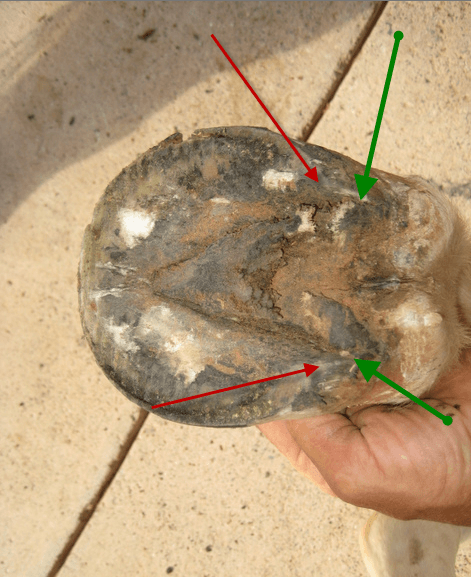 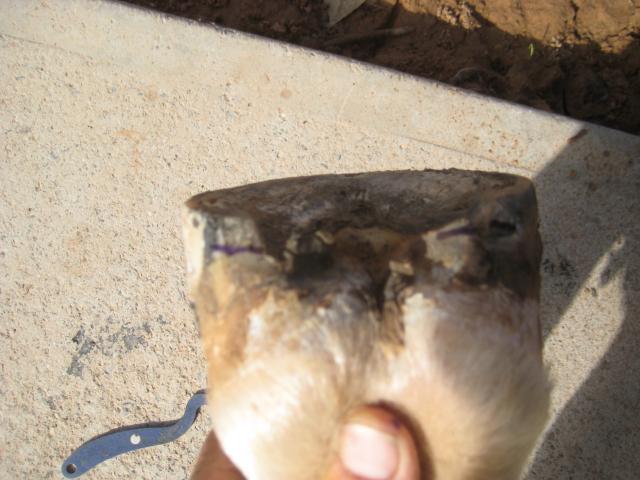 I have marked the heels with a purple line to show how far they should get shortened.

Shortening the heels to the widest part of the frog seems now a no brainer, but first I want to make sure, we are not cutting into live sole doing so. Step one is therefore finding the live sole in the heel area.

Using a hoof knife, we can scrape off the dull and powdery looking dead sole first. 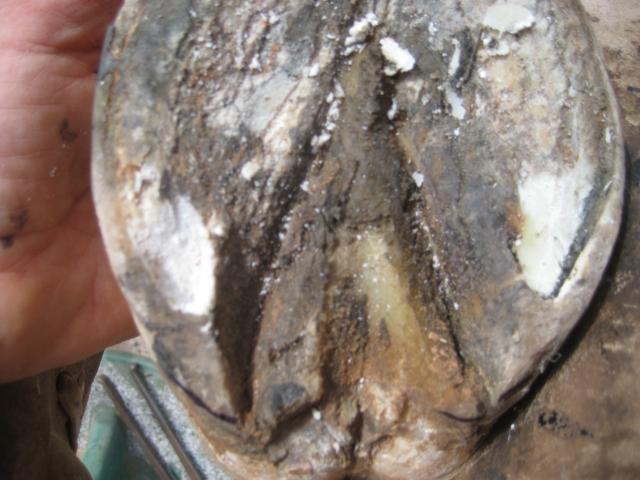 On the left heel, we still can see the dead sole. I just started to remove it. On the right, the shiny live sole is visible. I do not want to shorten the heel any further than that level. In fact, it might be advisable to keep the wall in the heel area about 1/8 to 1/4 th of an inch longer than the live sole.

Why is the level of the live sole so important?

Without taking a X-ray of the hoof, we do not know whether the coffin bone is parallel to the ground or to the visible sole. The coffin bone might be laterally tilted a few degrees within the hoof capsule. Finding the live sole first, will give me that answer, because the live sole will not lie. It will be of the same thickness to the sensitive structures on both sides. 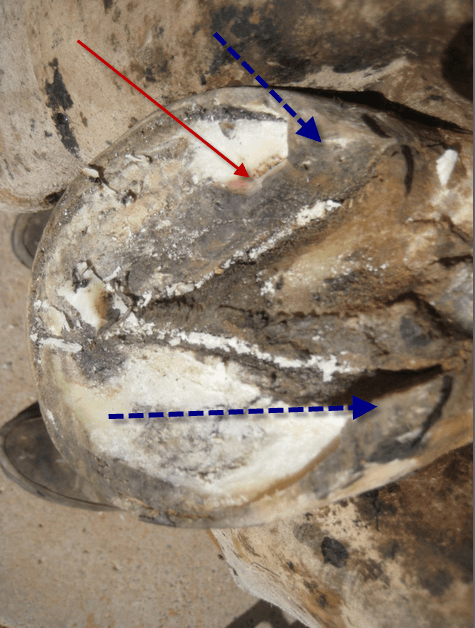 After finding the live sole on both heels, the blue arrows show the present end of the heel compared to the the purple line, indicating the widest part of the frog, where the heels should get  trimmed to, ideally.

On a side note, the red arrow shows bar bruising, caused by a bend over bar, exerting pressure onto the sole. 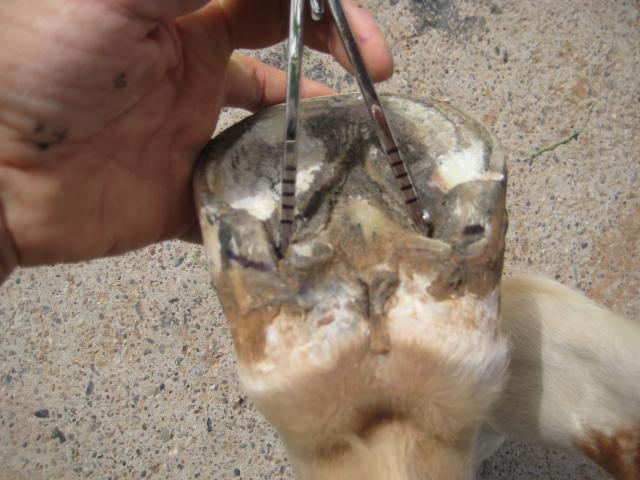 Measuring the distance from the bottom of the collateral grooves to the live sole and untrimmed heels. 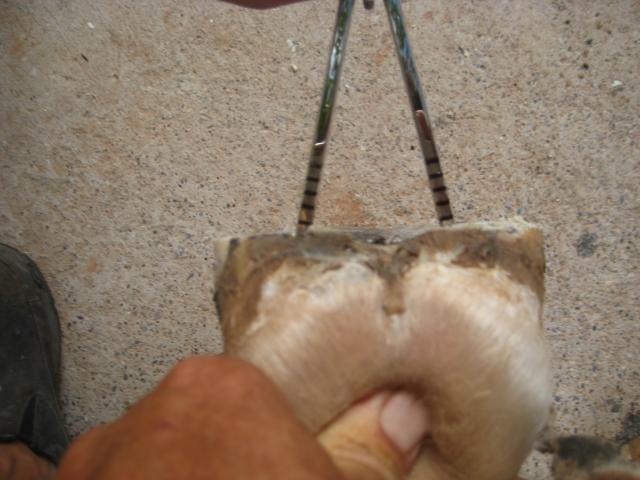 After trimming the heels, cross checking for equal distance from the bottom of the collateral grooves to heel level.

Before shortening any heels, it is a good idea to cross check these three parameter against each other:

-where is the widest part of the frog?

-where is the live sole in the heel area?

-how deep are the collateral grooves and are they equal to the heel level?

Following these parameters, we might not always be able to trim to the widest part of the frog on both sides.  A laterally tilted coffin bone, an occurence not as rare as one might think, requires leaving one heel longer than the the other one. Each horse is unique, each hoof is unique.

Professor  Bowker came up with compelling anatomical reasons for trimming the heels to the widest part of the frog. I might add humbly a mechanical one: support of the movement apparatus and skeletal system. 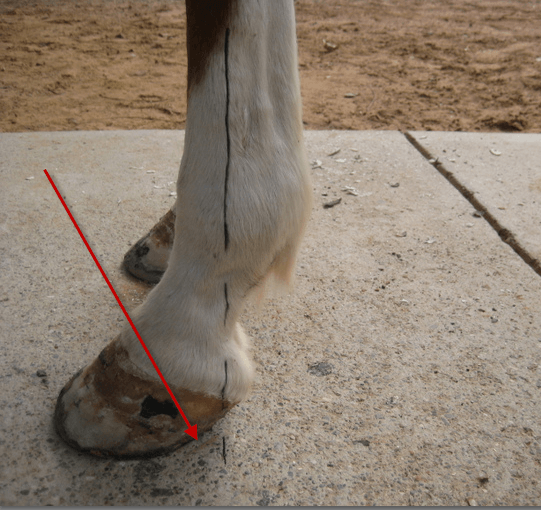 Compare both images: the red arrow indicates the heel in the untrimmed hoof as it compares to the plum line through the center of the canon bone. The heel is not supporting the skeletal apparatus in this image. The hoof is not supporting the horse, resulting in added stress to the tendons and ligaments. 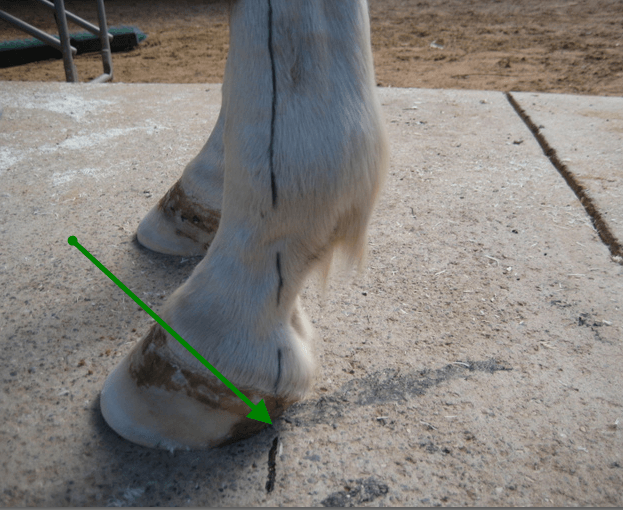 In this image, the green arrow points to the trimmed heel. The plum line through the center of the canon bone goes right through the heel: the heel is now supporting the skeletal system, therefore less stress on the tendons.

I might add that this horse is not displaying an ideal of conformation in the lower leg. Better would be if the end of the heel would extend back further from the plum line.

Whether we are practicing Natural Hoof Trimming, Natural Hoof Care, Barefoot Trimming or Trimming for Protective Horse Boots, Easyboot Gloves or Easyboot Glue ons or for shoeing, the principles of anatomical and mechanical correctness remain the same. The hoof is supposed to support the skeletal system and movement apparatus and the horse should land heel first.

Food for trimming thought by