Sunday we were due to ride in the sunshine but instead went into town in search of cheaper hay.

A couple of years ago, finding cheaper hay was relatively easy – most feed stores in this area sell a three-grain mix (oat, beardless barley, and wheat) which smells like yummy crackers and the horses gobble it up. Little wonder–it’s completely packed with sugars and carbs… sort of like feeding your child on mashed potatoes – yes, they’ll love it, but at what cost?

It’s well-known that diets low in sugar/carbs make for better feet so nowadays my herd no longer get their yummy cracker-hay – much to their sadness. Instead, I’ve switched to grass hays – either grass/alfalfa (provided I can find one where the alfalfa makes an appearance more as a seasoning than a main ingredient), orchard grass, or – what I bought on Sunday – an orchard/meadow mix.

In the winter my herd get fed in multiple small-mesh hay bags – string hay nets which, unlike “normal” hay nets, have smaller 2″ x 2″ mesh – meaning the horses have to nibble wisps out of it, rather than go for the smash-and-grab method that they could get away with using the usual style.

To begin with, the horses were a little frustrated by the new feeders – chomping and ripping in the hope of getting the hay out faster. Unfortunately, even though the hay nets are quite sturdy, a couple didn’t make it through the first few months. Luckily, however, at $6.99 a pop, they don’t break the bank when it comes to replacing them.

After a while, the horses got less anxious about getting their hay and gradually have come around to a nibble-a-bit-and-doze-in-between foraging style. As a result, they are actually eating less and are much less frantic at feeding time (better for petty squabbles).

This evening I went down to the barn where four of the six get fed. Not only was there hay left in all three hay bags, but piglet Jackit was napping in the corner, Provo and Uno were quietly munching, while Roop (Mr Pudgy personified) was down in another shelter and didn’t even bother to come up for supper* when I put out a fourth bag to keep them going until morning.

*the flip side of this, is that you worry when the horses don’t come running in a rabid manner at supper time. It’s not natural.

Filling hay nets for six horses when I’m scuttling to get to work isn’t my idea of a good time and whilst I’d much prefer to just toss hay over the fence, current slop-like conditions don’t make that possible even if I did want to skimp on my horse-mother chores. In the winter we live in a sea of mucky clay. We’re on a hillside and it seems like all the water that comes down the hill channels straight into my dry dirt paddocks. Slop R Us. 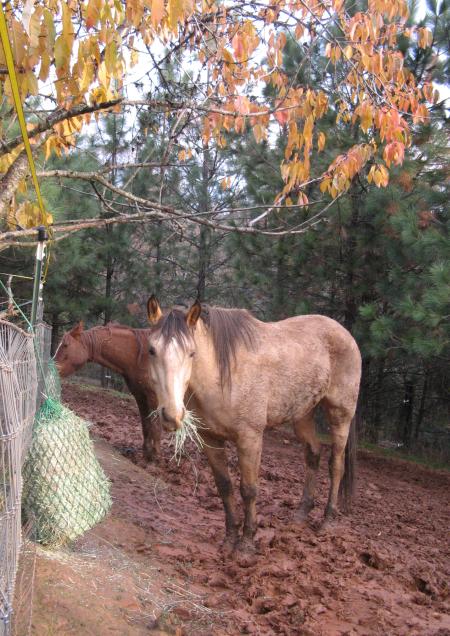 Keeping the hay out of the slop, Fergus and Hopi model.

The quickest way I’ve found to fill hay bags is to use a muck bucket or bushel bucket as a bag holder.

Spread the hay net over the bucket and pull down the sides so the “pocket” of bag is only a couple of inches deep: 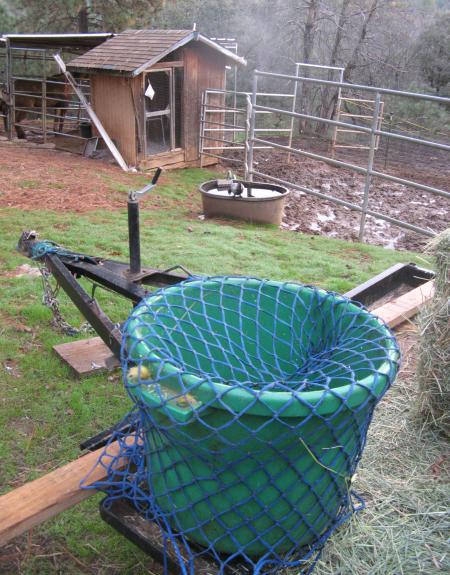 (The reason I pull the net so far down the sides is so that when I drop the hay in, the weight of it carries the net in with it. If I push the net all the way in the bottom of the bucket, usually the hay snags on the sides as it goes in and the top edge of the net disappears down into the bucket with the hay).

Dump the hay in: 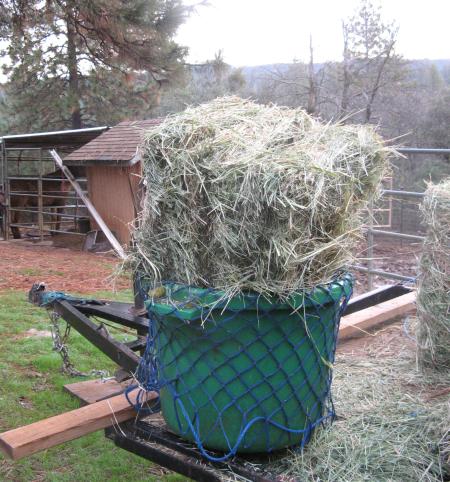 Flip up the sides and pull the string tight and tie a knot in it for carrying: 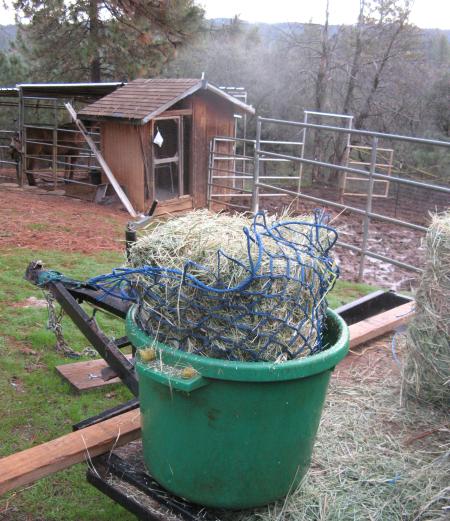 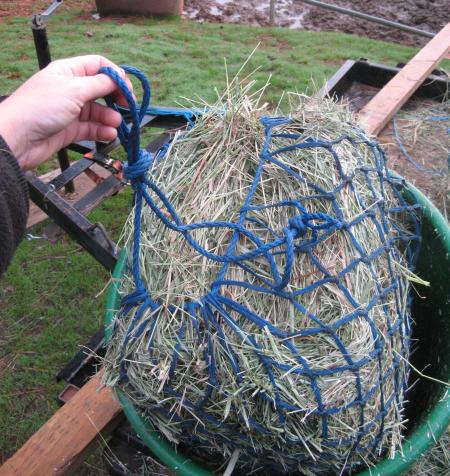 I attach the hay net to the panel using some kind of snap – no fiddling about fastening it with knots: 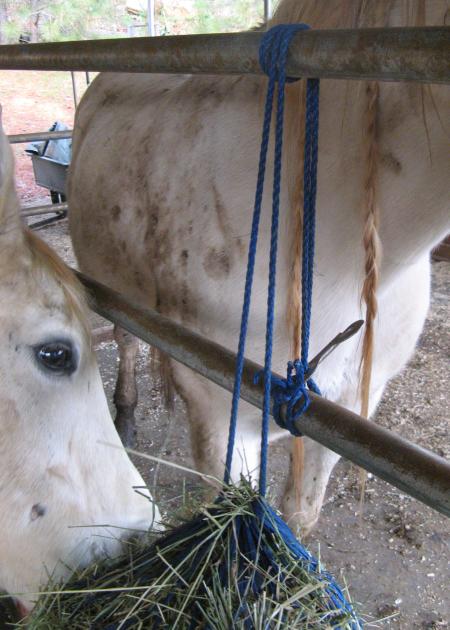 Or in Fergus’ case, a very strong snap attached to the tree (he likes to shake his bag vigorously to get the “good bits” out and it was quite hard on the fence): 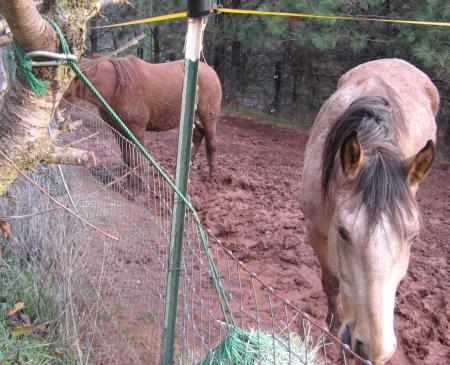 Finally, I have about 7-8 of these bags which saves on having to go and fetch empty bags before being able to refill them. A couple more would be nice.

In the old days when I used “normal” hay nets, at least once I came down in the morning to find my calmest horse (thank the endurance gods) tethered to the panel by virtue of having a leg stuck through the bag up to her armpit. That’ll bring you out in a cold sweat, quickly. 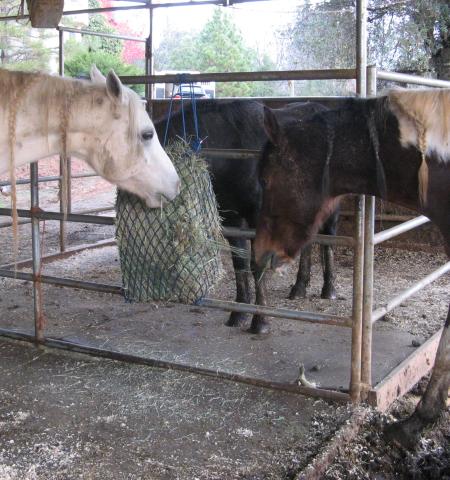 Roop, Jackit and Uno demonstrate how they can be friends and all eat out of the same bag… (sorta… the next photo in this sequence showed Roop trying to bite Uno – but you didn’t need to see that one).

If I just threw the hay in the stalls, they’d drag it out into the mud where Uno’s standing in about five second flat and then complain that the hay was too mucky to eat.

This system isn’t perfect (see above about “just chucking hay over the fence”) and like most things during the winter, it takes far more time than a person really has to spare (why do I always feel like I’m swimming upstream this time of year?), but the alternative is no pones, blob-in-front-of-the-TV behaviour, and lots of extra cash to spend on    …? But extra cash is not fluffy and doesn’t make peaceful whuffling noises in the nighttime, so I’m not sure it’s a good alternative.

And what did Lucy buy herself for Christmas? Four extra purple small-mesh hay nets. They shipped today!