About mid-October last year I stood next to my barn watching my best-in-the-world farrier hammer shoes on my horses.  I was signed up (read: had paid through the nose) for the upcoming XP2011 endurance ride – 2040 miles from St. Joseph, MS to Virginia City NV over 8 weeks.  Lots scared me about this trip, and finding good shoers en route headed the list.

“I’m going barefoot with boots.” I announced to Mo and he chuckled around the nails in his mouth. Six weeks later we pulled shoes and I began my crash course in barefoot trimming and boot fitting. Now I’d used Easyboots for many years, over shoes and in emergencies. How hard could this be already?

There are two parts to that question: how hard could learning to trim be, and then how hard could it be to keep boots on 12 feet for 2,000 miles in every kind of weather and terrain? I can hear some of you smirking, but here’s what I found:
–    First, not only was the task doable, it was well worth the effort.
–    Second, the effort never ceases – that is, the learning goes on and on. So do the rewards.

The hardest part of learning to trim on the fly was all the contradictory advice I got in the beginning, and not knowing what was correct.  I stuck with less is more until you see how it works, and followed the basics  my farrier was showing me (he does a fine balanced foot). The temptation was to shape the hoof to fit the boots but a good verbal cuffing from Mo kept me in line. He also advised patience as hoofs need time to adjust and my timeframe wasn’t necessarily theirs. Soaking the hooves before I worked on them and good, sharp tools helped tremendously; a good  knife sharpener was a great investment. I also found I could only do a couple of feet at a time before my back and my judgement gave out, so I set aside time every day to do a little. To my surprise, I learned that I actually enjoyed the process.

The first endurance ride I did with barefoot horses I used Gloves (3 days, 3 horses, all booted). The temps were in the low single digits and I had to warm the Goober Glue over a fire in a garbage can, but with enough tape, Goober Glue and some Gorrilla Glue I actually kept all the boots on all three horses for all 3 days (maybe they just froze in place!).

The next two rides were much less successful as Gloves flew off.  Each time there was a barefoot trimmer/booter nearby, and amazingly, each time they gave me different advice, right down to the size boot I should be using. Did I mention that these early stages can be expensive? But the best advice was to use Glue-Ons. So off to Missouri I went, loaded down with shells and glues and guns and tips and hand gloves and tools.

My first gluing experience was much like some other ‘firsts’ I remember – not as satisfying as and much messier than I expected. Amazingly 3 out of 4 boots stayed on the first day, first horse. But the 4th came off at the start when the horse was so hyper I couldn’t even get a Glove on for 10 miles. That Glove came off again as we left lunch in the rain and just as the stallions broke out of their paddock and the tornado siren went off. The ensuing scene was the ultimate reality show: 4 riders driving the stallions away from my mare as I slide around in the mud trying to retape and reboot. That finally done, I find I can’t get back in the saddle because my foot is too full of mud to get purchase in the stirrup. Another intrepid rider climbs down and throws me up in the saddle. Now we huddle to see what we know about tornados: short huddle – we know nothing. So we just concentrated on keeping the stallions at bay and riding west.

Dave Rabe the Great helped me glue the boot on that evening – showing me how to prep correctly. And that was the most important lesson of all. He is a great teacher and a real overachiever when it comes to getting a hoof ready for a Glue-On. No matter how much time I spent trimming and prepping, he always rasped the hoofs just a bit more before we glued. Here was the process:

–    I’d trim (with advice/correction from our resident barefoot trimmer) and then test each hoof by putting a shell on it and having the horse walk. If it stayed on, there were no bulges, and the heel sat down (eg. the toe was short enough); it was a good fit.
–    Next I’d clean the hoof bottom again and begin digging grooves in the hoof wall with my rasp edge until I thought it perfectly groovy.
–    Dave would then come over and clean the bottom again and dig more grooves and check that the shell was clean.
–    One of us would put the Goober Glue in the bottom, in a V where the frog grooves would lay and at the back of the boot to keep dirt out.
–    I’d hold up the hoof and he’d put the Adhere in the shell, then put it on, pound it in place, and I’d lift another leg to get all the horse’s weight on the one we were working on, holding it for 30 seconds or so and until Dave was ready with the next boot.
–    Repeat.

The first part took me hours as the hoofs were growing fast with all that work and I had lots to trim each time. The gluing itself would take 5 minutes and Dave could/can do four boots with one tip and ¾ of a tube of Adhere. Something to work towards.

Here’s my take away on Glue-Ons: put on over a good trim and with the right prep, they will stay on in rain, mud, cold, heat, and over any terrain. The glue fails before the boots do, and that takes between 250 and 400 miles. If you find the boots and they have tread on them you can grind out the old glue and reuse them – again correct prep of both boots and hooves is the key. The Australian team with their 5 booted horses lost, well, manure loads of boots in the beginning. They too were new to this form of entertainment and we learned about properly prepping together. Our first non-riding day we sat with a drill with grinder, a vice, and a big stack of used boots, cleaning off the glue. That wasn’t very difficult and all the boots were re-usable. 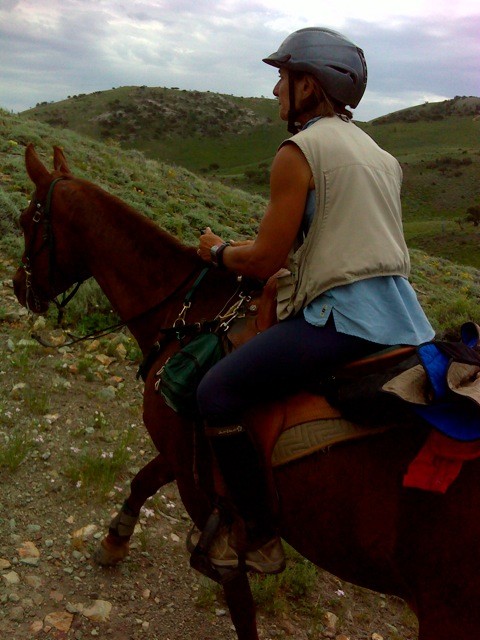 Boots will stay on in just about any conditions with the right preparation. This was taken at about 200 miles on this set of boots.

I left my mares barefoot for as long as possible in between new boots, but that was just a day or two because I was riding so much and alternating them. I thought I was getting away with it, but in fact one mare came home with bad thrush and a hard compacted sole; ‘nother lesson learned: 8 weeks in boots is too long.

Speaking of lessons, it worked out better gluing in the cold and wet than it did in the extreme heat. Adhere sets up in a minute or less when it is 98 degrees and those boots didn’t stay on for even 75 miles. They looked like they had goiters as the glue clumped between the hoof and boot. Of course in a perfect world you glue in moderate dry conditions, but who had perfect?

Some anecdotal information: only one rider rode all 2040 miles, and did every mile in glue-on boots. Of the five of us who rode more than 1,600 miles, only one used metal shoes for the whole ride. Of the horses that started in metal shoes, about one third moved to barefoot/boots during the ride. 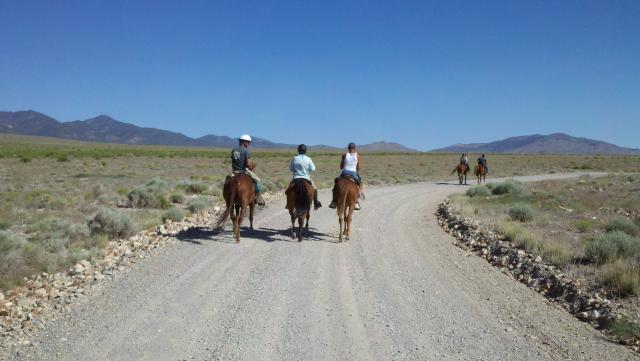 Dave Rabe on the right, riding Red the Mule. Red is in shoes here, but makes the switch. Max and Tracy also begin booting part way through.

The reasons for riders switching to boots varied:
–    Metal shoes didn’t hold up well to the hard packed roads during the first three weeks. The gaited horses went through metal shoes every few days.
–    Concussion lameness was our single biggest problem and the booted horses had far fewer than the shod horses (I had none over 1,660 miles).
–    Shoers were hard to find and riders had to wait for a day off to have them come out.  At least one of the shoers lamed several horses, and those horses went directly to boots.
–    Natalie Herman was available to trim; Dave Rabe was available to boot; several of us had boots to spare; EasyCare was great about getting more boots shipped to where we were. 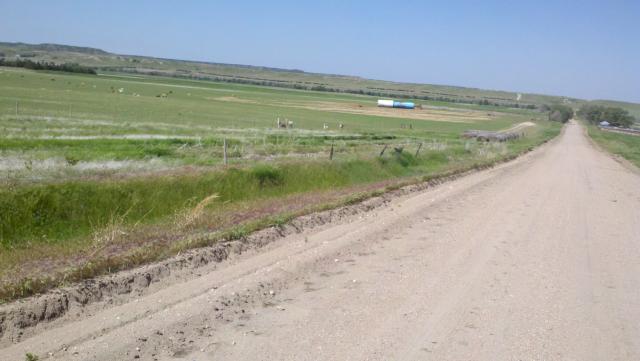 Roads softened a bit after a rain, then returned to their cement-like texture.

I’ve been home for over a month now. I’ve cured the thrush problems, got my hands on the Pete Ramey DVD collection, and found a good barefoot trimmer in my area to keep me on track. I’ve done a pretty tough 75 mile ride since returning and again lost Gloves.  What did I learn from that? 10 wraps of tape is better than 2 wraps, and those old boots really do stretch. More work for me, but dang that mare’s feet look good. 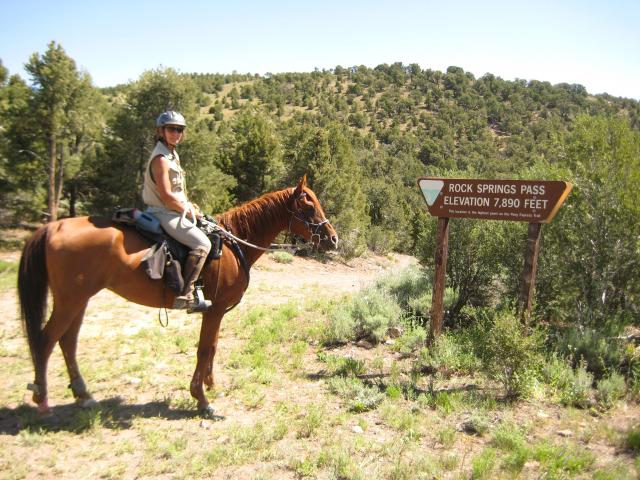 Sage and I at the highest point of the ride. She is wearing Gloves, has leftover clay from her post-ride wraps, has vet wrap covering a bout of scratches, shows her old and healed torn flexor tendon, and is sound as a dollar bill, after over 600 miles. 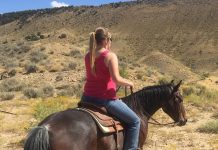