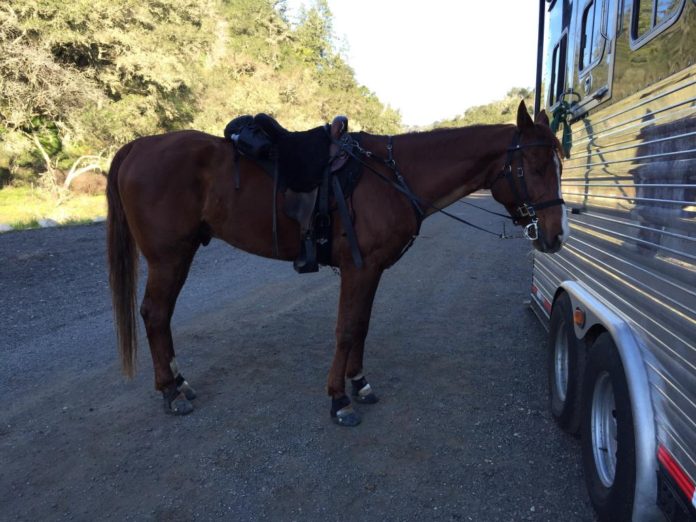 I did something recently that I haven’t done in years. I threw one of my horses in the trailer and set off to explore a network of new trails in my area—alone. I ride all the time, of course, but I couldn’t tell you the last time I went out for a solo trail ride. I’ve wracked my brain about this, and the last time I can recall is about eight years ago.

I used to ride alone all the time. I would go out for hours exploring the most remote, seldom-used trails I could find. I didn’t think twice about riding all day and never seeing another person. This was back when I had just one horse and didn’t have the network of riding friends that I do now. This was also before cell phones, so when I went off the grid with my horse, I was truly OFF THE GRID.  It never occurred to my then-20-something self that this was a potentially dangerous thing to do. To me, it was the ultimate form of freedom.

When I discovered endurance riding, this practice continued because I didn’t have anyone to train with on a regular basis. I would meet up with fellow endurance riders once in a while for training rides, but I still did most of my riding alone. Wow, have times changed. With five horses and a fabulous network of riding friends, my riding plans begin with a phone call or text to them. I assemble a posse and off we go!

What prompted this was the recent opening of a network of trails about a 10-minutes’ drive from my home. In 2013, the Napa County Regional Park and Open Space District opened Moore Creek Park. The park offered 6 miles of trails that were open to hikers, mountain bikers and equestrians. That wasn’t enough mileage to entice me to check it out via horseback. Then last fall, the district added another 7 miles of trails around Lake Hennessey and announced plans to add another 7 in the immediate future. Now my interest was piqued. Finally, a fellow endurance rider asked me if I had been to Moore Creek Park yet, and gave it her recommendation.

I initially thought about taking my dog and scouting the trails on foot, but that never came to fruition. Finally, out of the blue one morning I put Tyler in the trailer and drove out to the park to check it out. 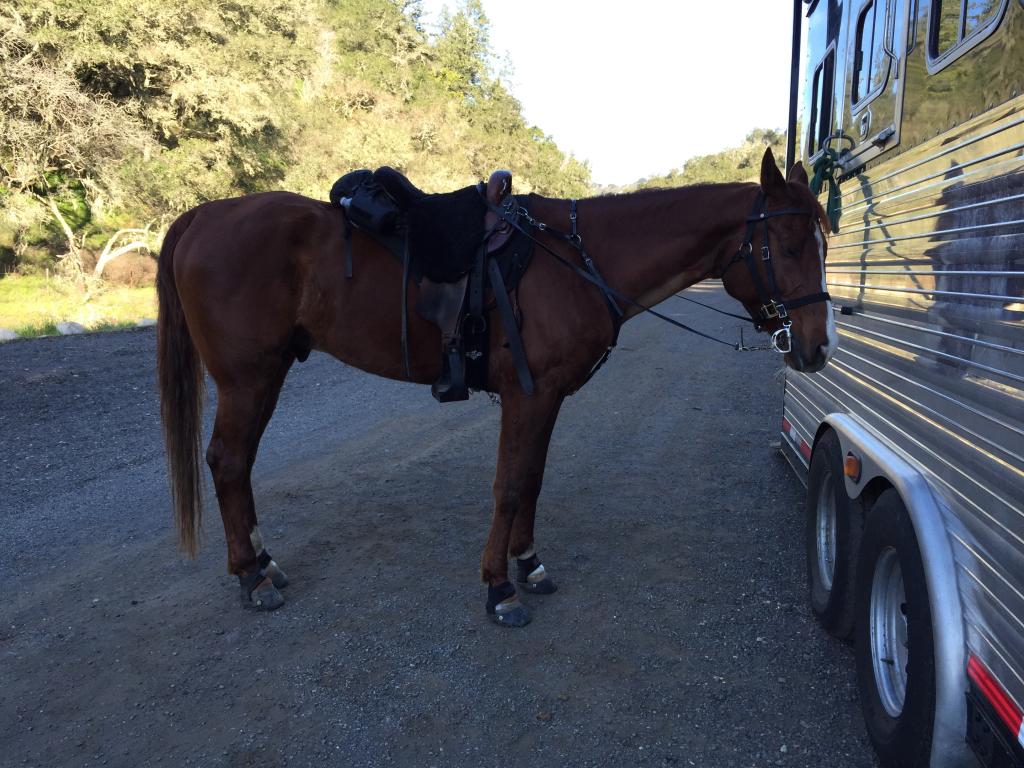 Tyler booted up and ready to check out Moore Creek Park. 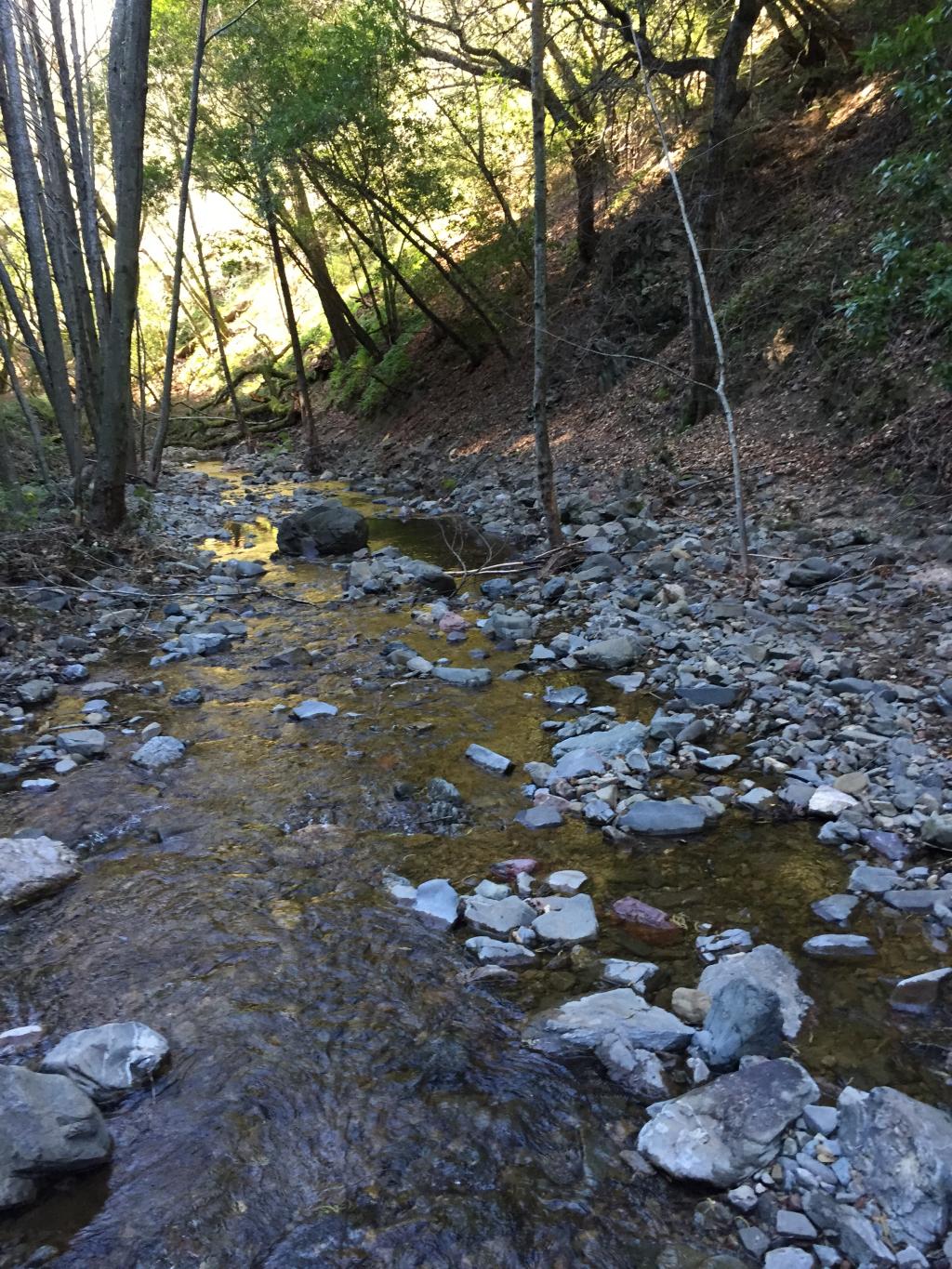 The first section of trail I rode comprised of the remnants of a 4WD road that followed Moore Creek, crossing over it several times. The road petered down to a trail that terminated at what was called the Secret Swimming Hole. I didn’t make it all the way to the swimming hole because that would have required me to leave Tyler tied somewhere and hiking about a quarter mile. 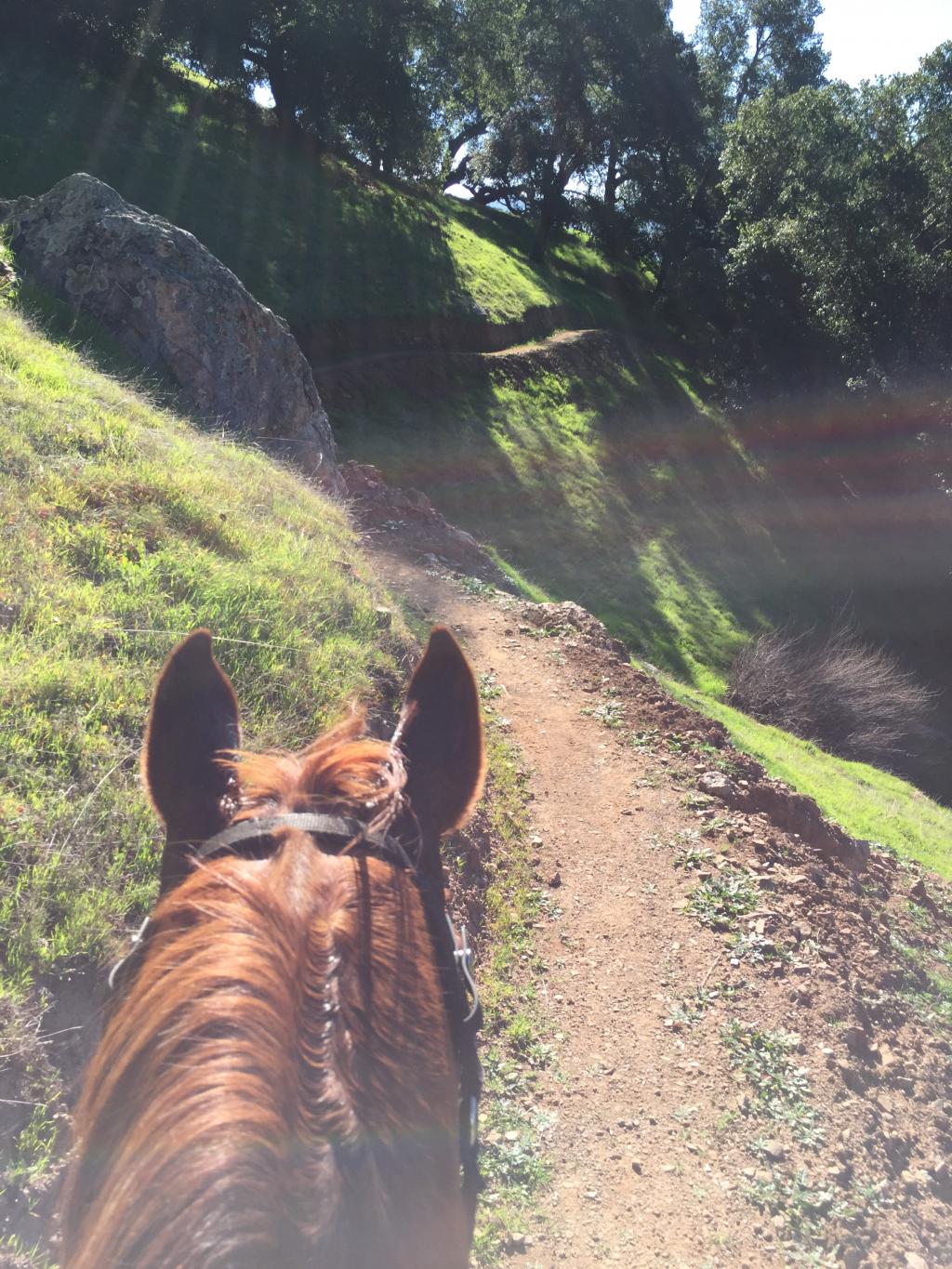 From there I picked up a 3-mile single-track trail that snaked its way up to the top of the mountain and eventually looped back to where I started. It was a cliff-hanger of a trail, but well-maintained and a lot of fun. 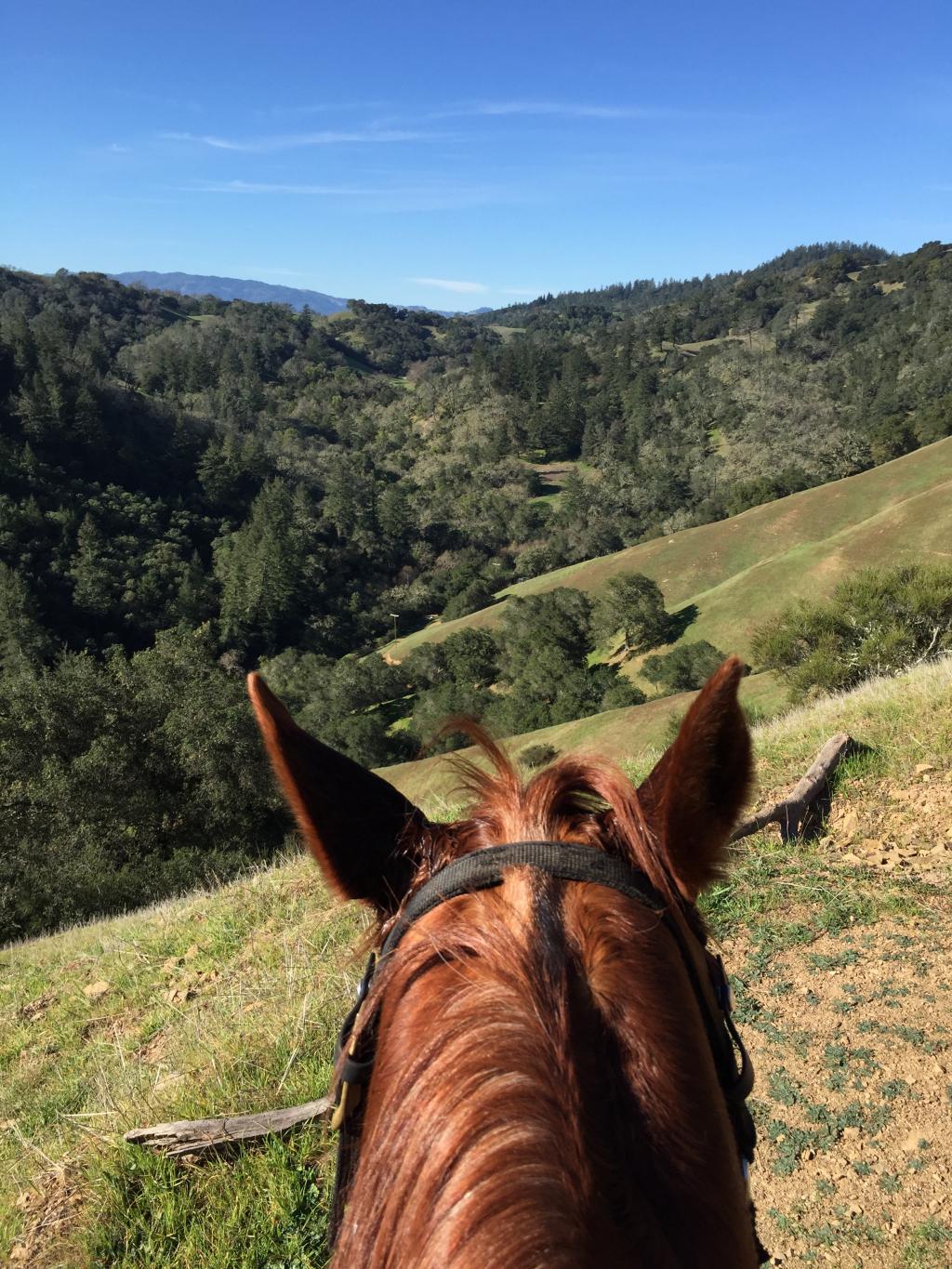 I next rode the new Hennessey loop, which was equally spectacular. It was a well-groomed road that rolled along the lake, and I could trot and canter most of it. A few climbs added conditioning value to the course. The setting was stunning: Hills covered with winter grass, oak trees dripping with Spanish moss and the lake itself. 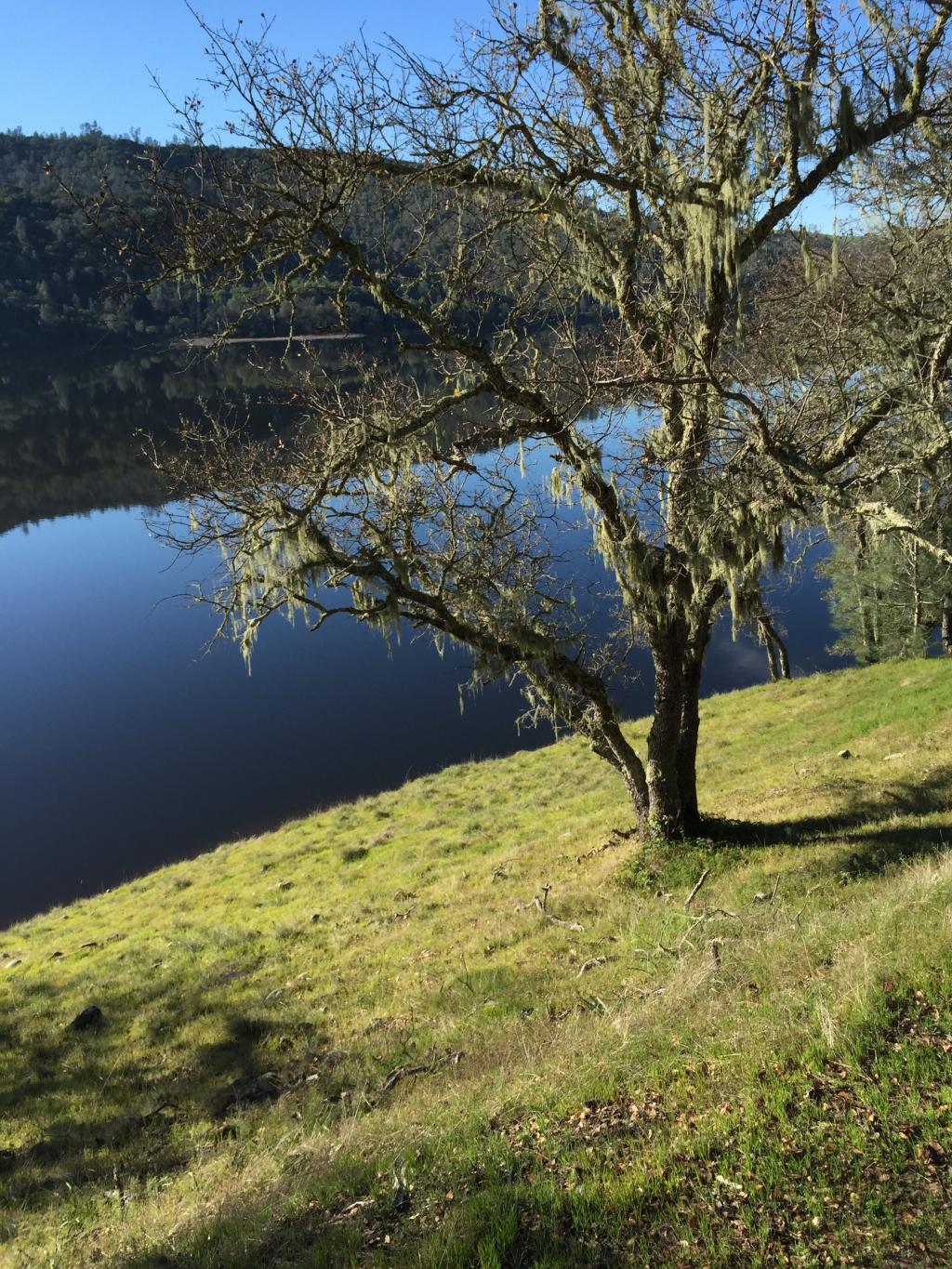 I rode for just over two hours, but I could have gone all day. It was great “mind” time, and a nice break from work. As I headed home, I was already planning another solo return trip.