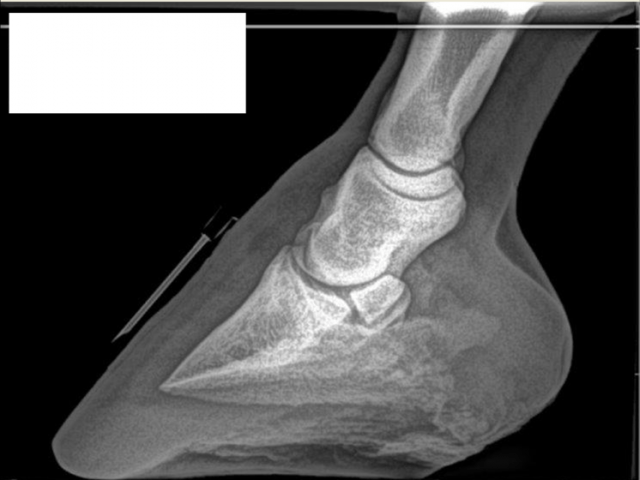 I recently had the opportunity to begin the rehabilitation of Chloe, an eight year old palomino. Chloe had suffered a deep digital flexor tendon (DDFT) tear, which although small, resulted in lameness. She had been ridden regularly, mostly walking with some trotting but no endurance. The veterinarian diagnosed the tear with ultrasound and also took x-rays of both hooves. 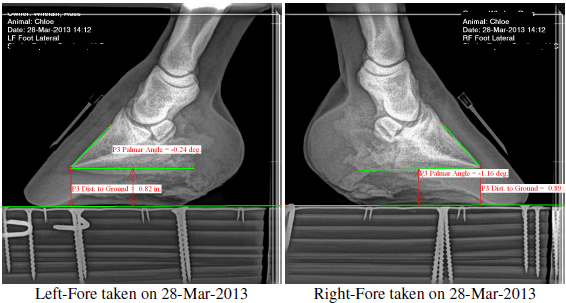 What we can observe right away is the negative palmar angle. Looking at the plantar (bottom) distance of P3  from a horizontal reference plane,  P3 is higher up at the tip compared to the  the rear on both front feet. The right front was – 1.16 degrees, and the left was – 0.24 degrees.

What are possible causes for a negative palmar angle?

In order to relieve stress on the DDFT, I had to keep the heel area higher to let more sole grow and at the same time trim, within reason, enough sole from the toe area. The idea was to reposition the coffin bone to a positive angle, essentially tilt it forward again. It’s a balancing act because leaving the heel longer moves the base of support forward, thus creating stress on the tendons. (Last year I expanded on how long heels stress the tendons and do not support the skeleton structure in my blog “All About Heels”.) This photo of a different horse shows the plumb line through the center of the canon bone ending behind the heels.
This hoof is growing forward and not supporting the body and movement apparatus.

I determined that I needed to extend the heels not only vertically but also proximally to give the internal structures support. First, I created a barrier with play-doh, then added Equipak CS over the rear frog area.
I only needed support and pressure over the heel area, not the whole sole. I followed up with several layers of Vettec Superfast over the Equipak CS. Next I covered the hoof with a styrofoam pad and let Chloe stand on it. After five minutes, the Superfast is dry enough for shaping it with a rasp. Caudal view of the finished product. Now when placing the hoof on the ground, the heel area was extended far enough
back to have the plumb line through the canon bone being supported by heel.

Both hooves received the same treatment. I added 3/4 of an inch in length and 1/4 in height to give me a temporary dorsal hoof angle of 67 degrees. The normal range would be in the high 50’s.

I trimmed and rebuilt these hooves for four months every two weeks. Time to check what results, if any, we were getting.

The x-rays taken after that time period show a difference in the coffin bone angles: 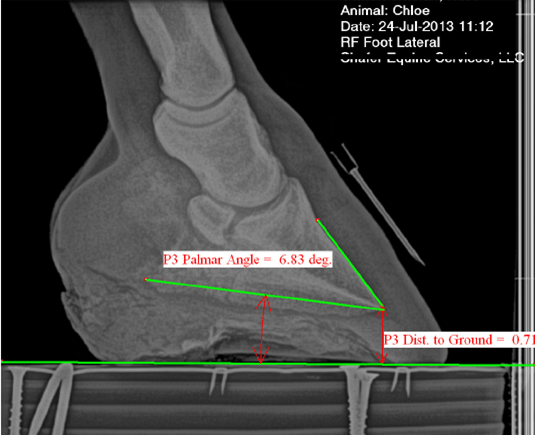 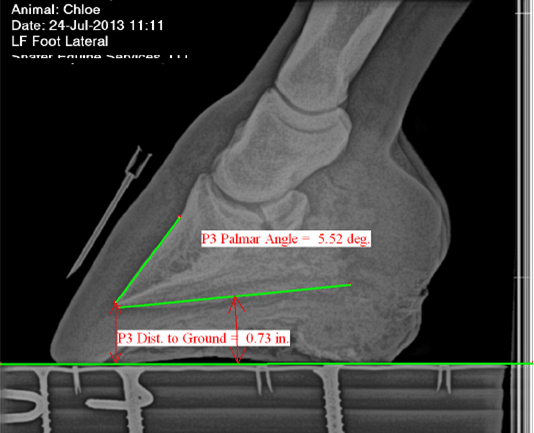 The palmar angles are now 6.83 and 5.52 positive respectively.

We succeeded. I was not sure if it was going to work, but it sure was worth the effort. These results also show hooves are remarkably adaptable and moldable. The tendon is healed and I’m going to gradually reduce heel height now. After four months of rest, Chloe is now ready for light work, mostly walking for short periods. Easyboots of various models and shapes can now be used for protection. This is not an everyday procedure and should only be attempted in close consultation with capable veterinarians. 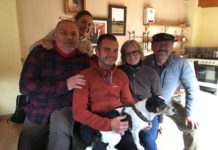