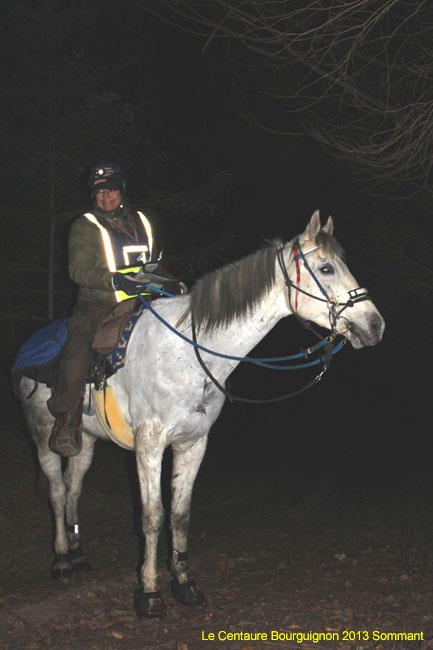 My horse, Lonestar Johnny Skywalker, a National Show Horse, will be 13 this coming June (2013). I’ve had him for 12 years and he’s never been shod in his life, because I’m a firm believer in going barefoot, i.e. natural. The horse I had before him, Kiowa Casey, was barefoot the second half of his life. I’ve been doing endurance, mounted orienteering and eventing with these horses – and I used to use a different type of boots, but was no longer satisfied with them, as they squeezed Johnny’s heel too much, and he clearly didn’t like wearing them. Now I’m using Easyboot Gloves in the back and Gloves Back Country in the front.

Johnny’s done around 2,200 KM of endurance mileage – which may not seem a lot compared to other horses but we’ve also been riding many miles mounted orienteering. That’s less mileage, but it sure takes you into the most forbidding terrain, as you’re often off-trail. Just last weekend we’d embarked on a special adventure: Le Centaure – 100 KM in two nights, 60 KM the first night, 40 KM the second. Now this may not seem like a lot, but it meant starting after midnight and finding the way, with your map, in the dark.

Unfortunately this has been a really tough and long winter, so what we found along the way was mud down in the alleys, and frozen ground, icy patches and snow up to one and a half feet up in the hills. We had to cross streams, scramble up and down steep slippery slopes to get around fallen trees that blocked the trail, cut across through dense undergrowth with fallen trees and branches on the ground. The Man from Snowy River comes to mind. Quite apart from everything else it was below freezing and my feet were blocks of ice, but that’s beside the point,. We were out for 14 hrs that first night – and day. Whatever we did, the boots just stayed on admirably, beautifully, and I was so happy with them. Riding in deep snow I’d not put boots on normally, but there we had such a collection of everything from swampy mud to rocky trails to slippery hillsides to ice that I had no choice. Occasionally one hoof would slip a bit on a truly icy spot, but less than the horses around me who were all shod.

Johnny seems to be happy with the boots as well – his strides are in no way altered from when he’s barefoot, and he doesn’t try to take them off the way he did with the brand we used to use at the beginning years ago. So this truly memorable ride was greatly assisted by our Easyboots!

Q&A – What’s the difference between the Back Country and the Trail?