Well we all know that I have been blogging (blabbing??) on and on for the past couple months about my plans to be a slave-no-more to gluing on boots. I love Easyboot Glue On’s with Goober Glue and Adhere. I think the performance of the Glue-Ons is absolutely the best form of hoof protection for us. If applied correctly, there is very little failure and the peace of mind during the long miles or several days in a row is completely worth it. However, having done several one-day 50’s in Gloves before, I knew there was another way! Like I have written, my mare has shown a propensity to be sensitive to EVERYTHING, and as such, had a difficult time with the gaiters on boots causing irritation. That said, I did my homework starting in January. I decided to to all of our longer training rides in a full set of Gloves, and went barefoot during our shorter mid-week rides. The longest ride we did was only 17 or so miles, but after several weeks of riding consistently in all four Gloves with no irritation, they were ready for the test! 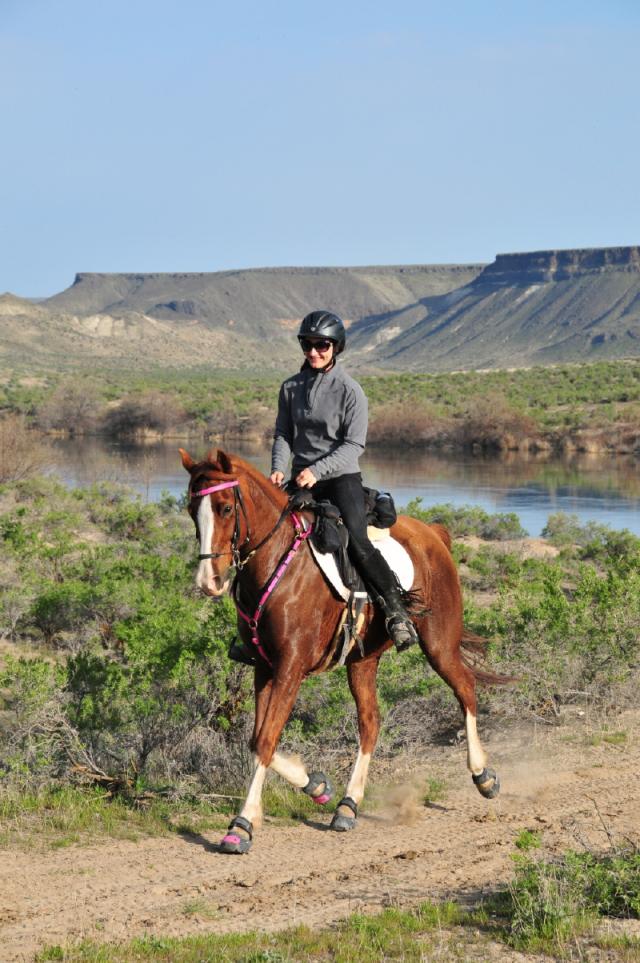 Saturday was the annual Owyhee Tough Sucker Endurance Ride. It’s the first ride of the season for Idaho, and only the second for the Northwest. The weather usually SUCKS and I was looking forward to not having to deal with gluing on boots mid-week during a raging blizzard/rain/thunder/lightning storm like I have in years past. Nope, this time I sat twiddling my thumbs Thursday night when I normally would have been covered in glue. I got a lot of stuff done and we had a stress-free departure early Friday afternoon. We got to ridecamp and set up in about five minutes with the use of Replika’s HiTie. Going off-topic for a moment, I have to say we just love our HiTie. There is no easier camp set-up than just swinging out the arm, plopping in the pin and attaching the bungee. Done. Clean-up is just as fast and we will be soon putting two additional HiTies on the trailer and doing away with the portable pen. Nice! 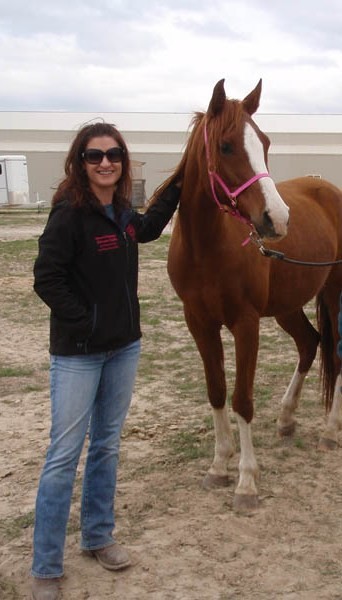 We vetted in leisurely after I slapped on a brand-new pair of Gloves in the front because I know the trot-out area has some rocks. After I was done vetting, one the local riders needed some help with her horse who would be competing the next day in his first booted ride. He and his rider had been having some trouble with their Gloves staying on, so we set them up in proper sizes which were reinforced when I needed a screwdriver to pry them off! Unfortunately he was a bit sore so his owner opted not to start, which is always a difficult call to make, emotionally, even though most people know what the right decision should be. There will be more rides and now his rider has even more time to work out their booting issues and be well-prepared for the next ride!

During the ride meeting, Steph Teeter and I decided to start the day off together and see how things went. Replika and Steph’s gelding, Rhett, had gone out together a few weeks ago and seemed to tolerate each other, as much as such independent horses can, and it ended up working very well! Steph and I had an absolute blast, flying along the trails on two great horses, chatting up a storm and marveling at the scenery and amazingly perfect weather. No hardships at this ride, we were oh-so-lucky, and equally appreciative! 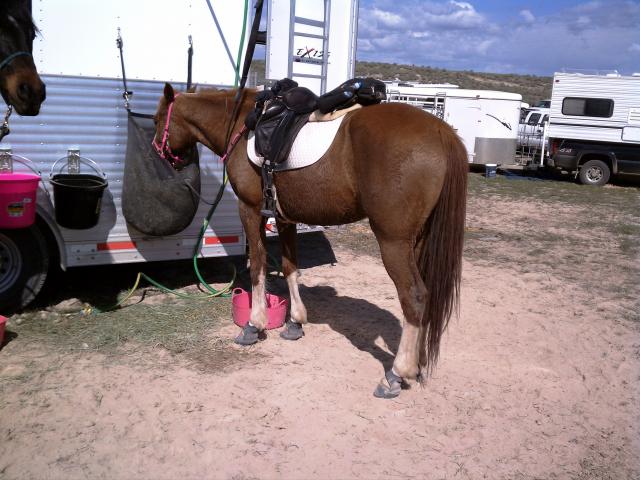 Replika at the vetcheck in her Gloves. No issues here! 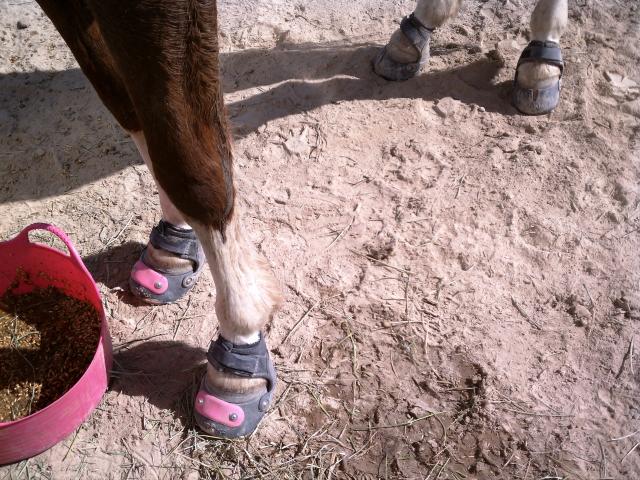 Steph began the barefoot transition for her herd last year while wintering in Scottsdale. She and her horse, Rhett, are a new decade team, and at 20 years old, Rhett has over 5000 miles including nine 100’s and Tevis just last year! This guy is amazing. While he didn’t have much trouble with his transition, Steph noticed a substantial improvement in his metabolic recoveries after switching to boots. Staying consistent, he was awesome on Saturday and both horses completed our fast ride (exactly five hours) with heart rates in the 50’s. The kicker of this is that Rhett was completely barefoot behind!! Funny thing is, despite just being trimmed on Wednesday, Steph couldn’t fit him into his boots (size 2.5 hind boots!!) the morning of the ride so she decided to do it barefoot and see how he did. That horse never missed a step. Awesome. 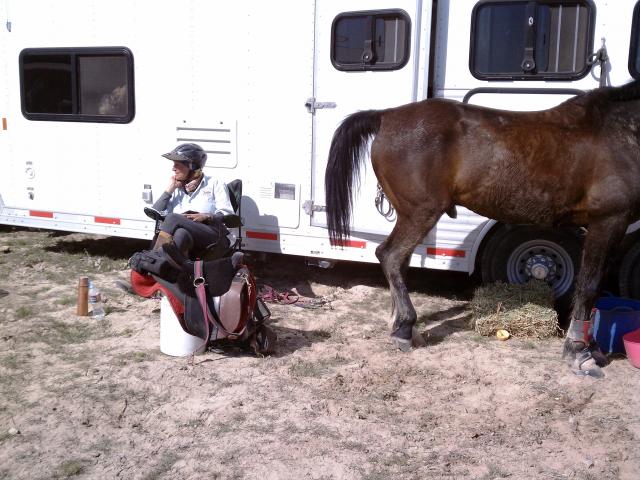 Steph and Rhett’s sexy butt and bare feet at the vetcheck. 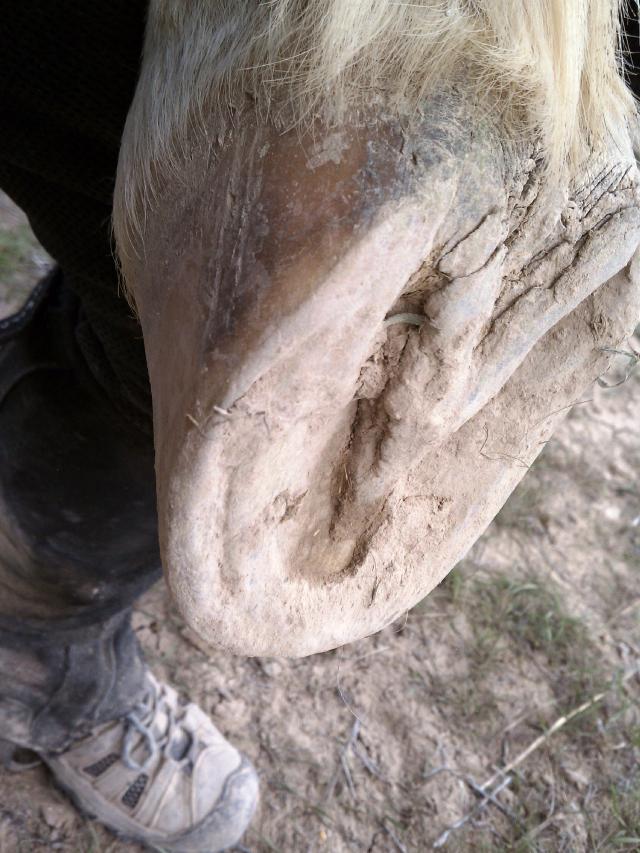 We rode pretty fast all day, staying at a consistent 10mph. My boots didn’t budge the entire first loop, which was 25 miles. At the vetcheck, I pulled back the gaiters but didn’t even have any debris to brush out. I had applied Replika’s boots first thing in the morning, using a few wraps of athletic tape and Powerstraps on her front feet. Her hind boots fit beautifully so we just put them on as is. About halfway through the second loop I noticed Rep’s right front boot was a bit twisted. She is technically an 0 on that foot but seems to move better on 0.5 as she doesn’t like any heel pressure. Now keep in mind that I take the risk of putting her in a larger boot on that foot based on trial and error. These are the things that you learn after really putting in the time with that particular horse. It pays to put some time into this stuff! At the next water stop, I popped off the twisted boot, shook out some sand that had gotten into the toe and slapped it back on. We cantered the most of the next eight or so miles into camp and had no more twisting. I won’t change anything for the next ride besides adding another wrap of tape and spending more time making sure the foot is really set in the boot. 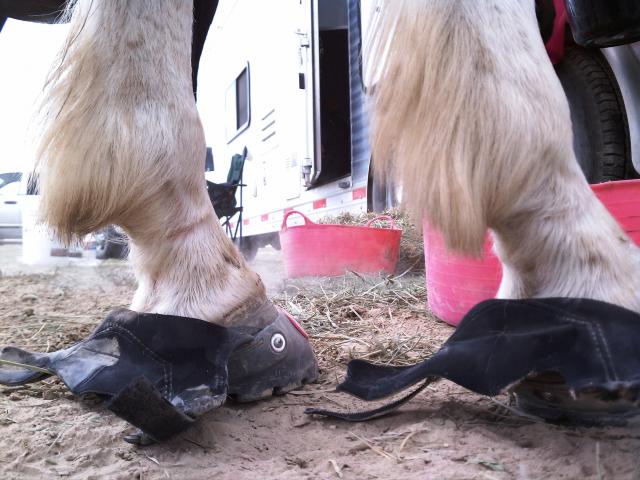 Replika’s pastern’s immediately after the ride. The line on the inside of the left pastern rubbed out with a brush. There was no swelling or stocking up later that day or the next morning. 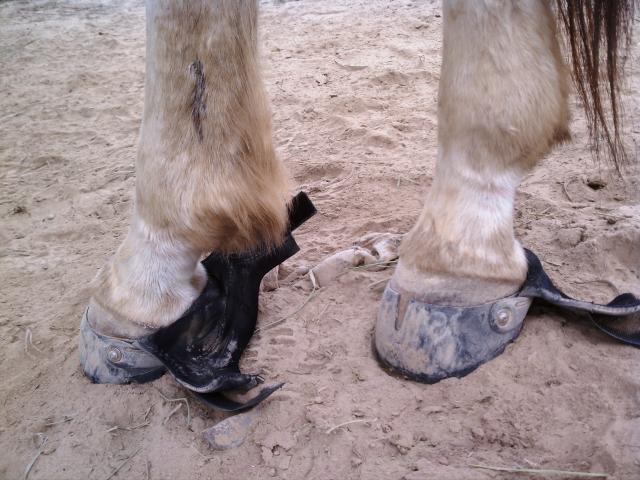 Replika felt strong and even all day. It was one of our best rides and I am beyond happy to have the option of using Gloves instead of Glue-Ons for single day rides. If I can stress anything at this time, it is to know what a good barefoot trim looks like and how proper hoof form will not only prevent most, if not all, boot-retention problems, but is also best for the horse in regards to mechanics, structure and soft-tissue. A horse with long toes, misshapen hoof walls, high/low heels or flares will not usually hold boots. A competition is not the time or place to experiment or try something new. And honestly, there is no shame in keeping shoes applied until you have enough time to give to a proper transition and the learning curve of using hoof boots. We definitely want everyone to share the same success with natural hoof care and boots that we have, but at the same time, it isn’t usually instant gratification. That said, it’s completely worth it!