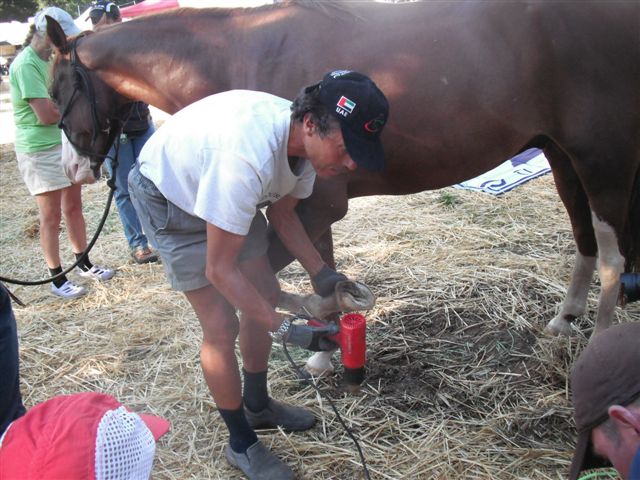 Christoph Schork and Dian Woodward from Global Endurance spent a week in Tucson after the Valley of the Sun endurance event in November 2008.  When they arrived Christoph and Dian had shoes on their horses but used Easyboots over iron shoes for events that had long sections of hard packed roads.  The visit from Global Endurance was perfect timing as EasyCare was about to release several new hoof boots.  Dian and Christoph took the time to look over the new Easyboot Glove and Easyboot Glue-On products and did several conditioning rides next to our horses that were fitted in the new hoof boots.  The performance of the new products and success on the training rides convinced the pair to pull the shoes from their horses and give the hoof boots a try the following weekend. Christoph and Dian after Las Cienegas in 2008.  This was the first event for Global Endurance in Easyboot Glue-Ons.

The first endurance test at the 150 mile event was such a big success that Global endurance continued to race the entire AERC 2009 season in Easyboot hoof boot products.  The team will end the 2009 season with over 3,300 miles, 15 best conditions and 30+ wins.

Christoph and Dian have shown that endurance horses can compete at the highest levels of the sport in hoof boots.  They have been competitive at local 50 mile events, the Tevis Cup, the AERC National Championship and FEI events.

The EasyCare/Global Endurance partnership has been verybeneficiall.  Over the year EasyCare has learned a great deal about how to glue Easyboot Glue-On shells in place, what adhesives to use, how to prep a hoof, how to remove boots, racing and training in Easyboot Gloves.  Thanks to Global Endurance, hoof boots have made huge advancements in 2009.

Thank you Global Endurance for believing in the EasyCare protective horse boot. Christoph Schork and Dave Rabe approach Robinson Flat at the 2009 Tevis Cup.  Both riders are Easyboot experts and long time users. Dave and Christoph will both be in the AERC Hall of Fame. Christoph Schork and and Global Endurance Moonshine at the FEI Kentucky Cup.