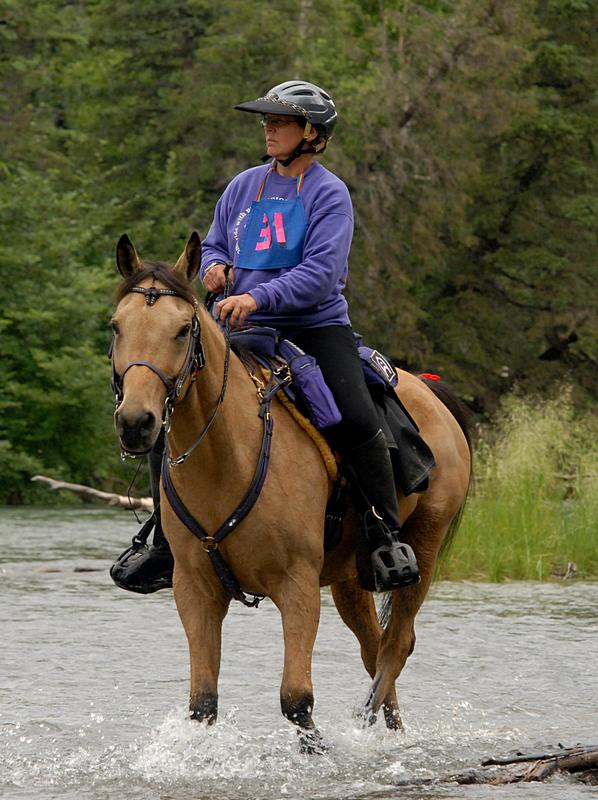 The following are excerpts from an article by Laurie Knuutila of Fairbanks, Alaska, that she wrote for her competitive trail riding newsletter.

In the past issue of this newsletter, I promised to report on my use of Easyboots over the course of the summer. So, here it is – My open, honest, no-holds barred experience using hoof boots instead of shoes.

I own a half Arabian gelding named Bo (Indy’s Midnight Sun) that I use for competitive trail riding. He tends to travel close in both front and rear and sometimes interferes. During the course of the last four years of condidtioning and competing him, I found that he tends to interfere less when he is barefoot than when he is shod. I’ve worked closely with my farrier to correct the problem. This year I decided to try hoof boots and see how he traveled in them.

After looking at many, many websites, offering all types of boots, I settled on Easyboot Gloves as my choice of boot to try. After a fresh trim, I took the recommended measurements to get the correct size. I found that my horse’s feet did not fit perfectly into any of the boot sizes. He has rather oblong hooves, not the best shape to fit boots, but I decided to try them anyway.

I purchased four Easyboot Gloves from a vendor at an NATRC National Convention, two size one boots for the fronts and two size 0s for the rears. Having never used boots before and not ever seeing anyone put them on a horse (except in YouTube videos on EasyCare’s website), I managed to get them on without too much trouble. They did not fit like the video showed, there was a bit of a gap between the boot and the hoof wall around the sides. But, the boots appeared to be the correct length based on EasyCare’s photos.The fronts fit somewhat looser than the rears.

I started out using just the front boots. The first week, I rode about 30 miles and had no rubs anywhere. The boots stayed on just fine. At the end of that first week, I did a longer ride of about 22 miles in one day. When I took the boots off, there were small rubs on the outside of both front pasterns. I did some research on the internet concerning boot rubs and found lots of suggestions, some of them quite complex. I decided to try the simplest fix first: loosen the gaiter a little. I had no more rubs for the rest of the summer.

During the course of riding, my horse and I tackled all types of footing, from gravel roads to dirt trails, to water, to swamp, to really bad muck. I did not lose a boot in any of it. I was really impressed with how well they stayed on. That’s not to say that I didn’t ever lose a boot. I actually had one come off on three different occasions. And it was always the same boot – the left hind.

During the course of the summer, the boots and gaiters showed wear and tear. The gaiter on a front boot began to come apart on the outside edge. Since I have a heavy duty sewing machine, I took the gaiter off the boot and stitched the loose part back together. It held up for the rest of the season. In preparation for the competitive trail ride in July, I ordered an extra gaiter for both boot sizes.

I also ordered QuickStuds for all four boots and the QuickStud Tool for installing them. I knew that the trails could be really slick if they were wet and I also knew that the area had been receiving a lot of rain.

It rained both days. At the end of the first day, I was pleased that I had not had any boots come off, despite the challenging conditions and deep footing; however, I did discover that one gaiter had ripped on that left hind foot. When I went to install the new gaiter for the second day, I discovered that the velcro on the new gaiter was considerably shorter than on the old one. I didn’t think it would hold together, but I didn’t have a choice at that point.

When I returned home after the ride, I phoned EasyCare and explained what happened with that left hind boot and gaiter. She immediately shipped me a new Glove boot with gaiter and it fit just fine.

I would definitely recommend using the Fit Kit that EasyCare sends out before you purchase the Glove boots. I did not do that at first, but when the boots didn’t seem to be fitting like I thought they should, I ordered two different Fit Kits. I used the same sizes that I had purchased originally; however, using the Fit Kits removed any doubt that I had the right size.

Talk to an EasyCare representative before you purchase boots. I was thinking about getting a different style boot in the EasyCare line than the Gloves. But, after talking to a rep and telling her the mileage and terrain that I ride, she recommended staying with the Gloves, stating that the other boot I was considering, though probably a better fit for my horse’s hoof shape, was not the best choice considering the miles that I ride.

My horse interfered about the same with boots as he did with shoes, so that didn’t change anything in that area for me. The boots were somewhat of a hassle to deal with during competition, but not so much that I wouldn’t do it again.

My horse was very comfortable in hoof boots and didn’t seem to mind them at all. I noticed a difference in how he traveled barefoot versus booted. Although he was equally forward either barefoot or booted, he seemed more confident in his boots.

As a side note, my horse, vetted out sound and was the first place horse (best conditioned) for the Open Heavyweight class, he was also the high point Half Arabian, and he and I together were the overall high point horse and rider team (horse and horsemanship) for the entire ride (56 riders).