Uno n’ me get to go to Bridgeport this coming weekend – something I’m very cheerful about because as far as I’m concerned, the Eastern High Sierra Classic endurance ride is probably the most beautiful ride in the West Region. I’ve been lucky enough to complete the ride twice in the past, on Roop and on Zini (a fun mare I rode during the 2005 season, who sadly had to be retired after a pasture injury), and last year I got to crew for Patrick and Fergus on their first 50 there (in Gloves, no less). 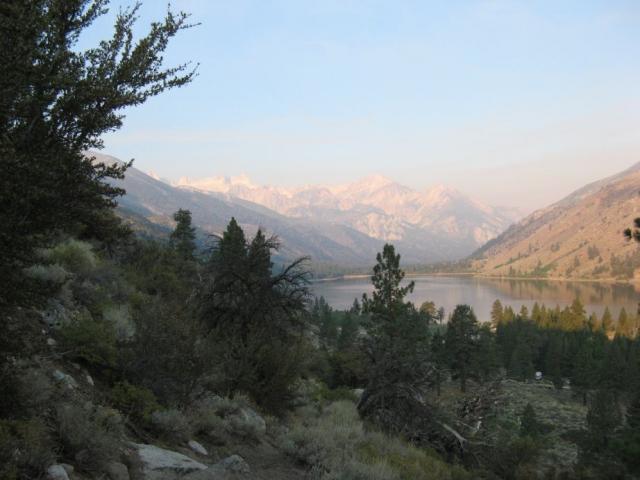 Lake level on the first part of the first loop at Bridgeport: 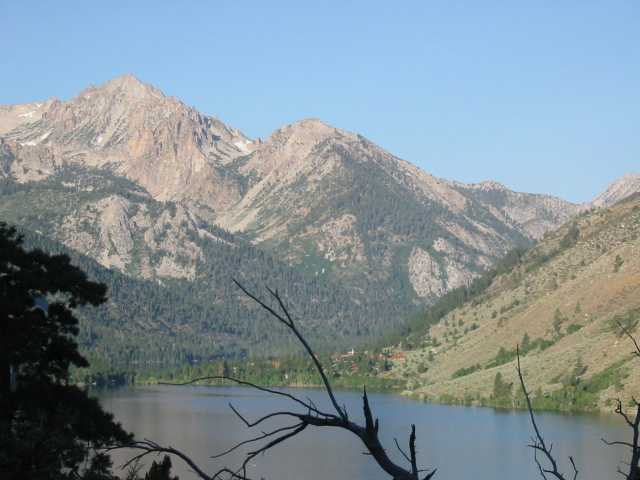 Looking down on Twin Lakes after you climb up the second ridge: 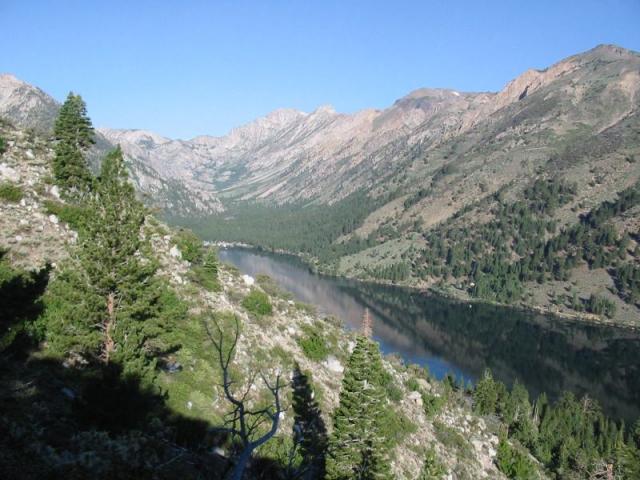 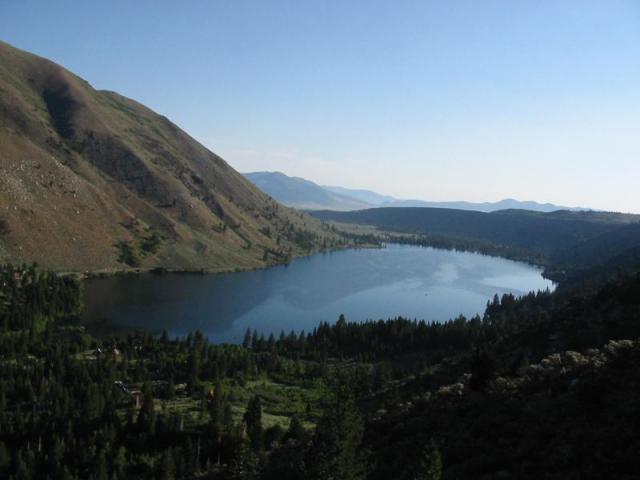 The 12,000+ ft Sawtooths which back onto the NE side of Yosemite: 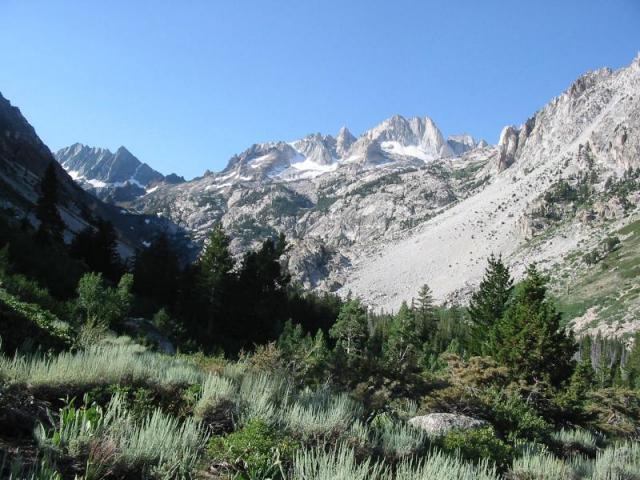 Riding on Hunewill Ranch, Loop 2 in the afternoon: 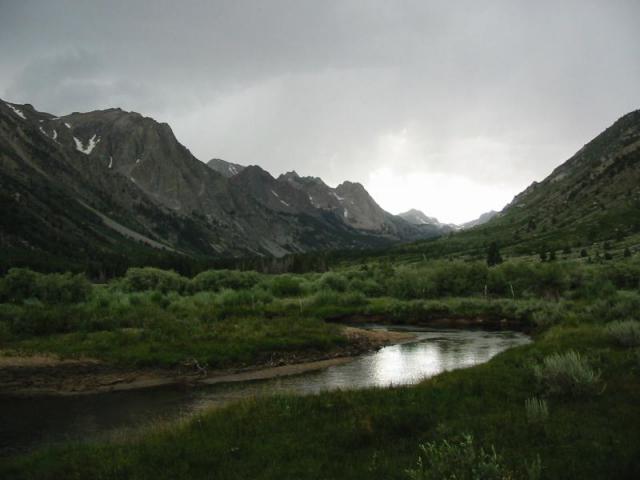 My biggest challenge this month has been catching up. I had to go to England for my younger brother’s wedding and once we got back and got settled down again I realised how horrendous the horses’ feet looked. A couple of them had been due for trims before we left but there just wasn’t time. Now they had reached the Embarrassingly Awful stage. Having horses who grow a lot of foot is a blessing and a bane – on the one hand, it means that any mistakes you make rasping are quickly corrected by the horse’s body going “tut… what was she thinking?” – but on the flip side, if you leave a horse like Uno for slightly over five weeks, you’re going to be plenty sorry when you have to clean up the mess.

Apparently, this time of year is also when horses decide to grow false sole. So suddenly I was faced with not just long hoof-walls, but also wodges of “stuff” that I was leery to remove – I try to leave the callousy sole alone as much as possible – but at this point I desperately needed to remove it. So I took a deep breath and took the feet back to where they belonged – knowing that by doing so, they were probably going to be sore for a few days.

Surprisingly, they weren’t as bad as expected – which was just as well since we ended up riding about 14 miles barefoot in back on Sunday. With friend Leslie and Eagle, we took Uno and Fergus for a spin around a loop that includes the Larimer Trail. The Larimer Trail mirrors Tevis’ California Loop on the opposite bank of the river, but towards the top of the canyon, not the bottom – ack. Luckily, it has more bushes than CA Loop – bushes that lull you into a false sense of security, even though in reality they would do little to slow your fall.

Since I needed two hands on Sunday, I’m having to use some photos I took from Roop last November, when Leslie and I did our last foray onto the Larimer Trail. Leslie and Eagle will also be at Bridgeport in their boots: 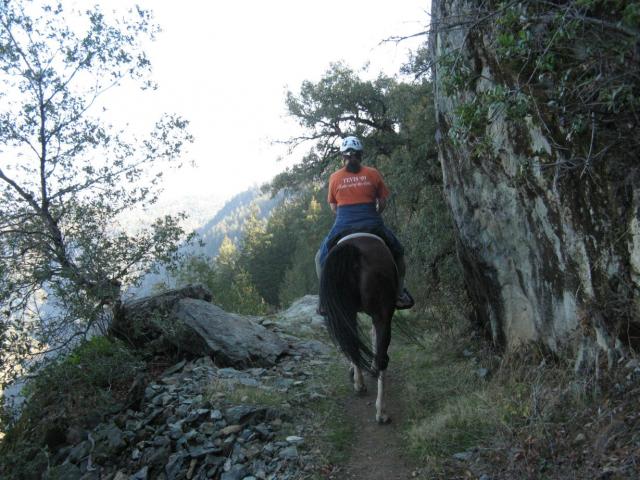 Looking down at the California Loop far below on the other side of the canyon: 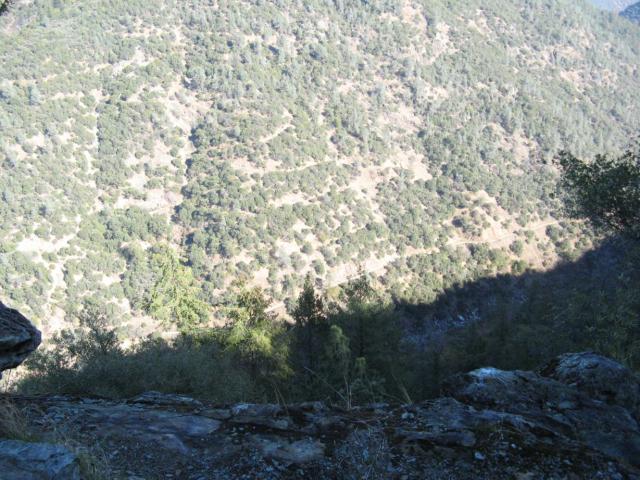 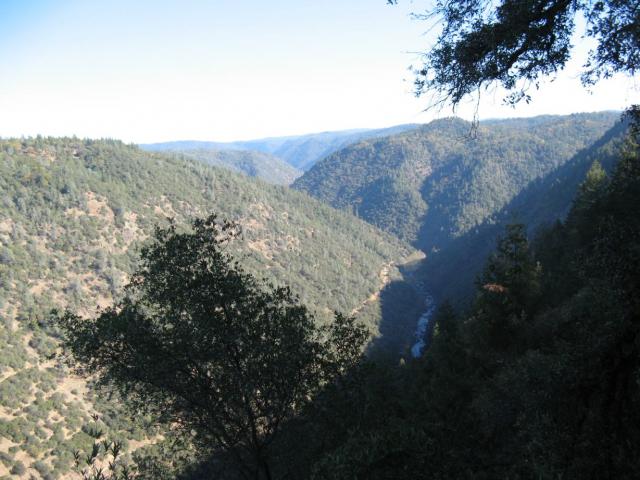 Part of the trail that wraps around the cliff by an old mine entrance: 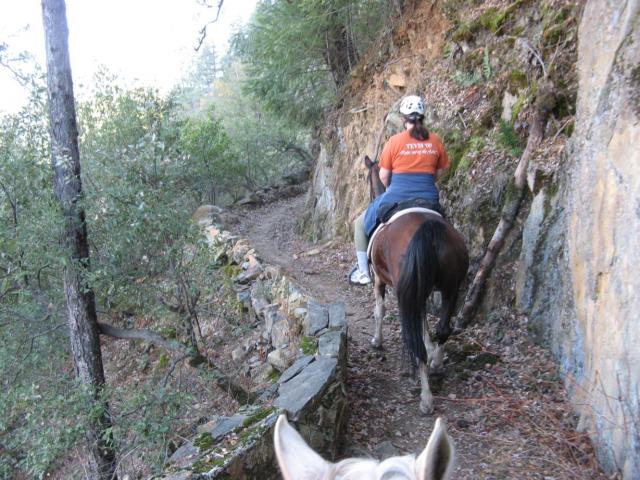 I’m starting to conclude that the likelihood of your boots staying on the right rear foot has a direct correlation as to how stupid your horse is acting during that particular ride – and Uno was acting very, very stupid on Sunday. At one point I even had to get off and lead for a while – not enough riding on a fit horse does not a good pony make. Sure enough, his right rear Glove went flying off – luckily before we got to the narrow part – and I opted to take off both rears for safety’s sake, figuring I could always slap them back on again once we were past the worst.

Really, however, I wasn’t that surprised – I’d had some fit problems on the rears at NV Moonshine necessitating some last minute (like, 20 minutes before the ride started) rasping to try and seat the boots better. That ride his Gloves all stayed on, but whatever was going on with his back feet was exacerbated by me letting him go five weeks with no trimming. He was starting to develop a weird flare on the outside toe… my pone, cow-hocked? surely not??

To recap, this year Uno has done a bunch of rides in a bunch of different footwear options:

Despite the Gloves working well for him earlier in the year, it evidently wasn’t going to be the best choice given how his feet are currently growing. If there’s one thing I’ve learned (albeit against my will), it’s that to do endurance you have to be flexible, so now I was faced with deciding what to put on Uno’s feet for Bridgeport.

Bridgeport has some big climbs early on in the ride when the horses are still very fresh, so with that in mind (and thinking just how “fresh” Uno has been recently <grin>) I think it will be safest to glue shells on the back. Although I could also do his fronts, I don’t have any clean shells to use and I’m too lazy, so he’ll just wear Gloves with PowerStraps on the front.

Previously I’ve always glued using Goober Glue. I like its rubbery properties and I like that I can clean up and reuse the shells (cheap? moi?). But there’s definitely a learning curve on gluing technique and it wasn’t until NASTR that I really felt like I understood how to get the job done properly. Having this knowledge meant that I was pretty sure I hadn’t done a good job on his left front – and sure enough that was the one I lost early in the ride. 🙂  (Knowledge is power?)

This time around for Bridgeport, I’m contemplating using Adhere for the whole gluing process. We shall see – gluing shall be done after work on Thursday evening, so I’ll see how I feel by then. I still have some last-minute packing to do (“last minute” because I don’t get home from work until 7 pm, usually, so run out of spare time quickly) and think that Muggins will probably need a bath at some stage, since he has been delighting in rolling in the manure pile. Does the glamorous equestrian life ever end?