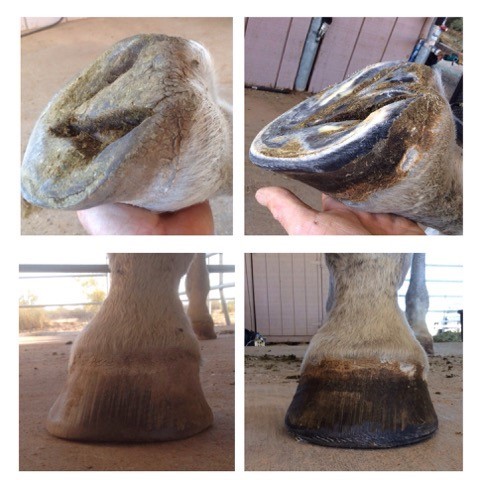 The photos below are the right front foot of a right fore-limb dominant Warmblood. She stands 17h and has size four feet. These photos span five months time. The previous trimmer was doing a good job keeping the heels level and the toe reasonably short but due to her body weight being imbalanced over her feet with the majority being over her right front, the hoof capsule drifted laterally until the outer structures started to break away from the corresponding inner structures.

She wasn't lame at the time that the first photo was taken, in fact, she was being ridden weekly by the trainer/trimmer and by the owner for weekend dressage lessons. I feel that this is important to note because many horses endure excessive damage to their feet and limbs because they don't show obvious signs of lameness and the owner/trimmer either doesn't recognize hoof distortion or isn't sure what to do about it.

The photos are two different views of the same foot. The time span between the images on the left and those on the right is several months.

This horse is not fully rehabbed at this point but she has continued to maintain progress in spite of many hoof care challenges. Here's a list of the pros and cons of her environment and lifestyle:

Pros:
1.  Lives in a 1/4 acre paddock with several other herd mates.
2.  Gets ridden regularly (and straight) by a professional trainer.
3.  Fed mainly Bermuda grass.
4.  Gets a properly balanced trim every 2-3 weeks.

Cons:
1.  The footing in her paddock is several inches of manure.
2.  She gets supplemented with alfalfa.

This mare had a chronic infection in the lateral bar that was being caused by the shearing forces from the outer structures tearing away from the corresponding inner structures. The footing in her paddock made this difficult to clear up.

This horizontal sequence of 3 photos shows her foot at different intervals of the rehabilitation process. 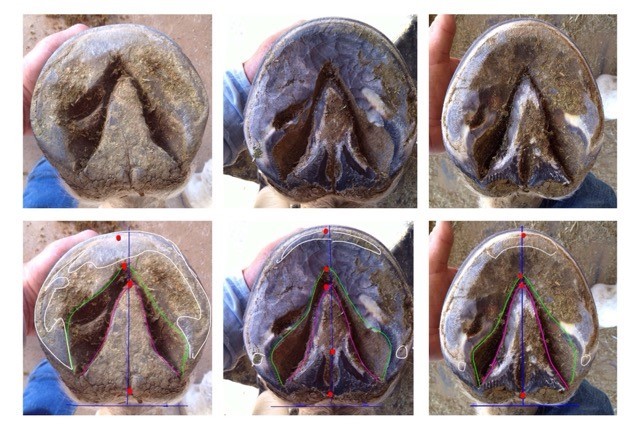 I've outlined the frog in pink and the outer edge of the collateral groove in green. The vertical blue line runs from the back of the central sulcus to the center of the toe. The horizontal blue line indicates the back of the heel bulbs. The red dots indicate:

The white outlined areas show where the foot is making ground contact. The top row are the same unmarked photos. When the coffin bone is correctly aligned with the hoof capsule the red dots should line up on the vertical blue line. The earlier this is detected, the easier it is to correct.