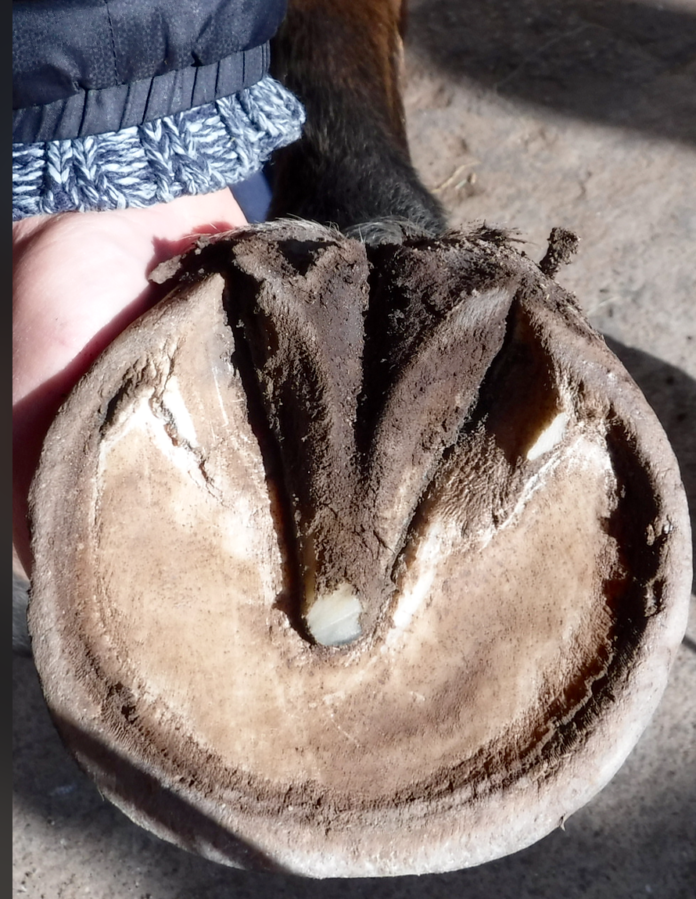 What do frogs and bars have in common?  Answer: they are both most controversial among hoof professionals.

Bars and frogs of the equine hoof are the most discussed tissues and there are about as many opinions out there as there are hoof care professionals. Bars and frogs are always a hot discussion topic. (I had written a blog about bar trimming a couple of years ago.)

Personally, when trimming the frogs, I am a minimalist. I remove as little as possible from any frog, unless special considerations require it. But more on that later.

The frogs of the equine hoof have many functions, one of them being shock absorption. Generally speaking, a large, wide and thick frog is better suited for that task. A frog that contacts the ground upon landing of the hoof is a healthier frog compared to a recessed frog or one that is not able to contact the ground because the hoof is shod with a horse shoe that loads the hoof wall only peripherally.

Not sure what it is, but many hoof trimmers just have an urge to trim something of the frog. Even if it just a tiny little piece. I mean, what good is a hoof knife when one cannot use it. And frogs just cut so nicely and soft, quite contrary to most soles and bars. They just cannot help it, something has to be cut of the frog, even if it is not necessary.

During my recent hoof care clinics in Europe, one of my group of hoof care professionals discussed trimming and preparing hooves for gluing various hoof protections like the EasyCare Glue-Ons, Flip Flops, EasyShoes and Equiflex horse shoes. Every year for the last ten years I have been traveling to Europe to conduct these clinics and workshops. Most of the time by myself, but occasionally also with EasyCare Staff and Garrett Ford.

A participant had asked me a question and just in that moment I had turned around to answer, one of the others who held up the hoof could not resist the urge to slice a little piece of a very healthy and nicely callused frog. Nothing needed to be taken off here, but it is just so typical of us trimmers. Something needs to be cut, even if only a tiny little bit. 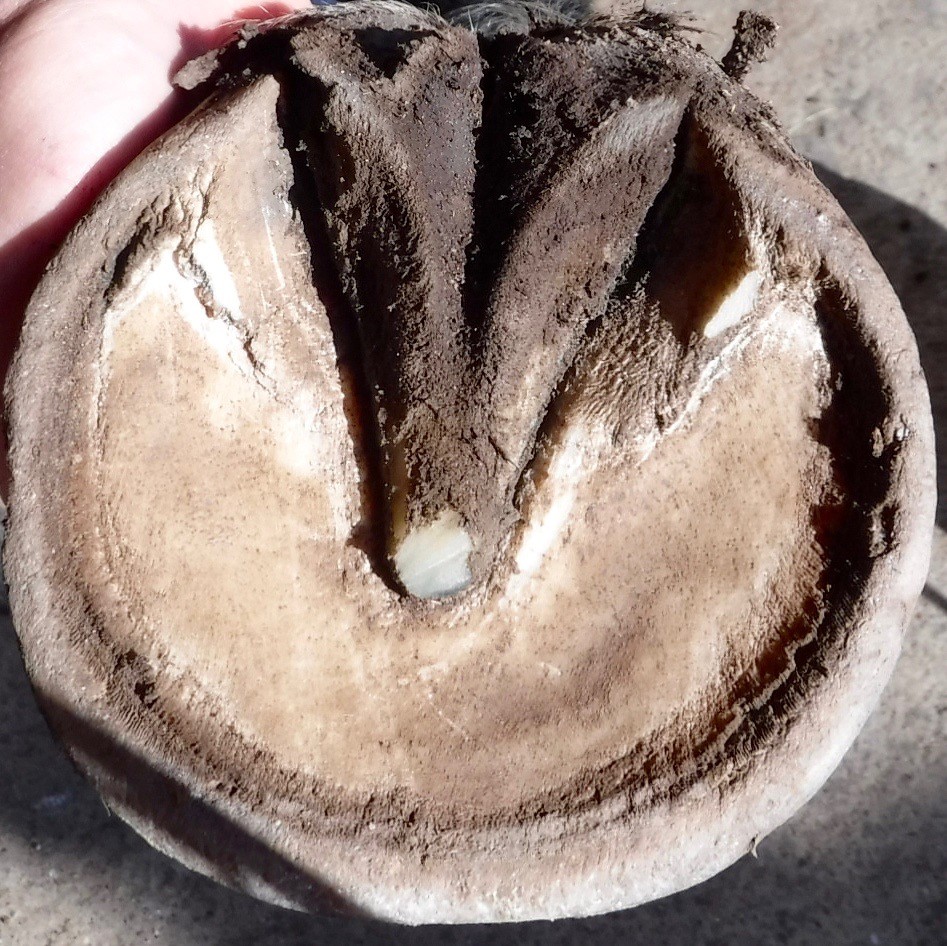 Now, this will not do much harm, however, that little piece taken off robbed unnecessarily the sensitive frog tip from its callused skin.

The calluses are a front line shield and defense against fungi, bacteria and parasites. Remove it and the frog is weakened and harmed. Before cutting any tissue off a horses hoof, I always ask myself the two questions:

– Is the removal of that tissue helpful to the horse or will it be harmful?

– Will the horse travel better or worse afterwards?

These are two quite different questions, the second question building upon the first.  What decision I ultimately make in terms of hoof trimming depends a lot on whether or not the horse is being ridden, over what terrain, for how long,  and is it bare footed or with hoof protection.

For me, the ultimate test is riding a horse over varied terrain bare footed. Below I am sharing a few photos of different frogs and my trimming thoughts on them. 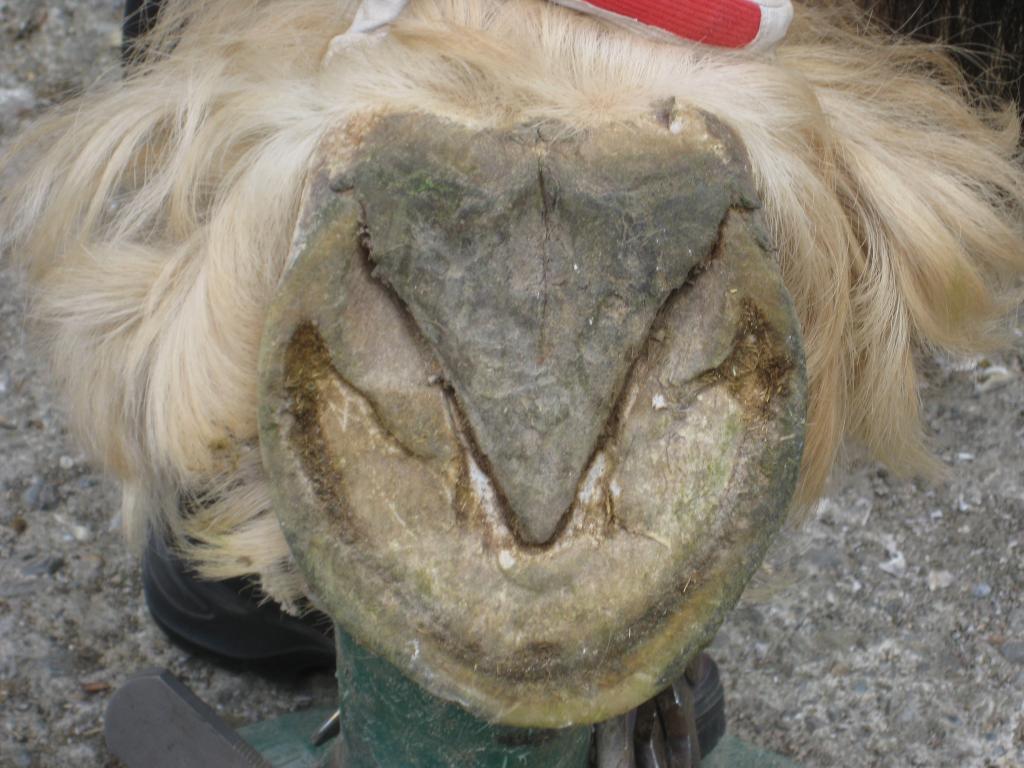 Let's start with an easy one: This Tinker frog is perfect for its job of landing and shock absorption. I think we can all agree that any trimming of this frog would harm the horse. 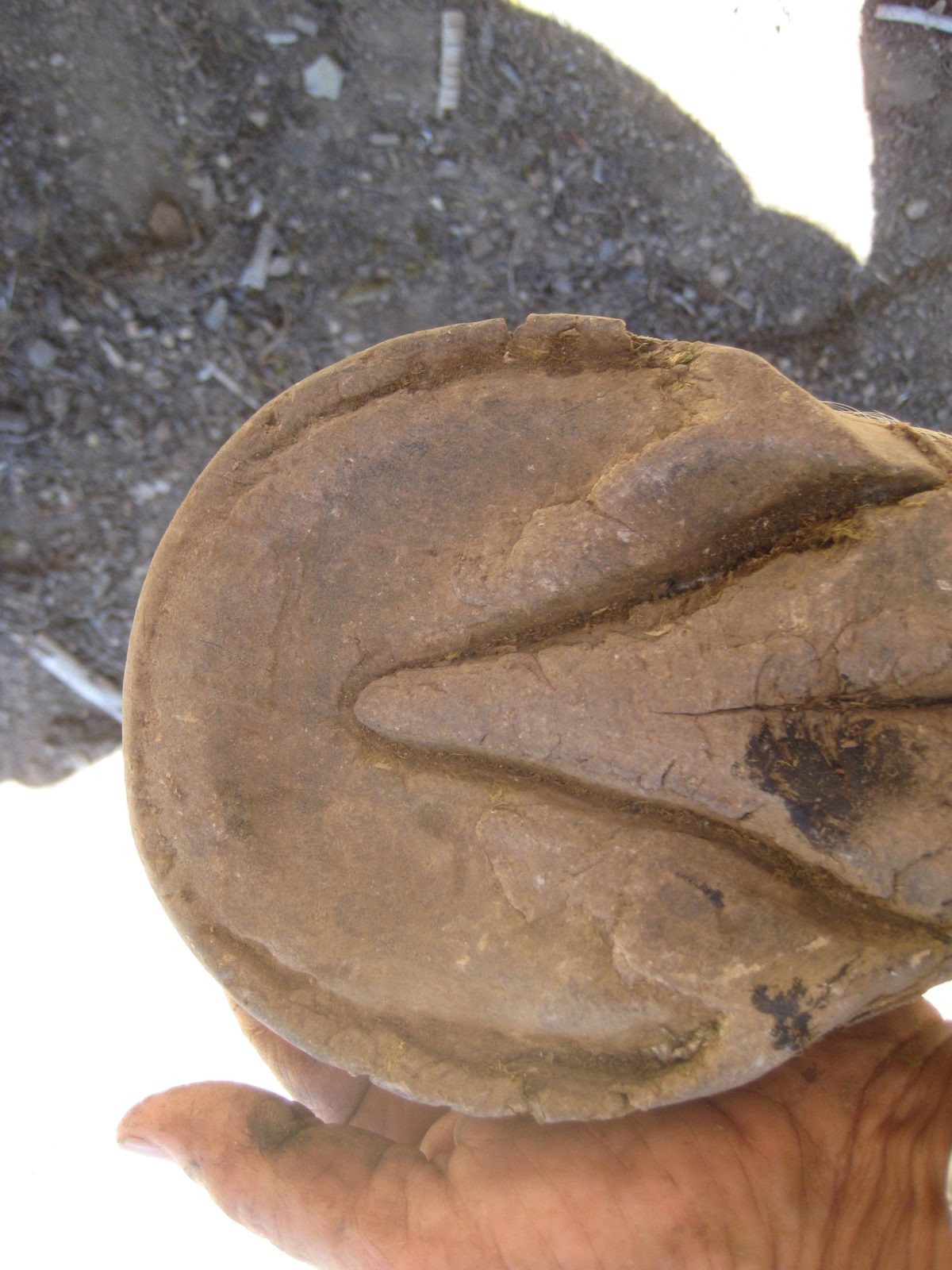 Another healthy frog that should not encounter a hoof knife at all. 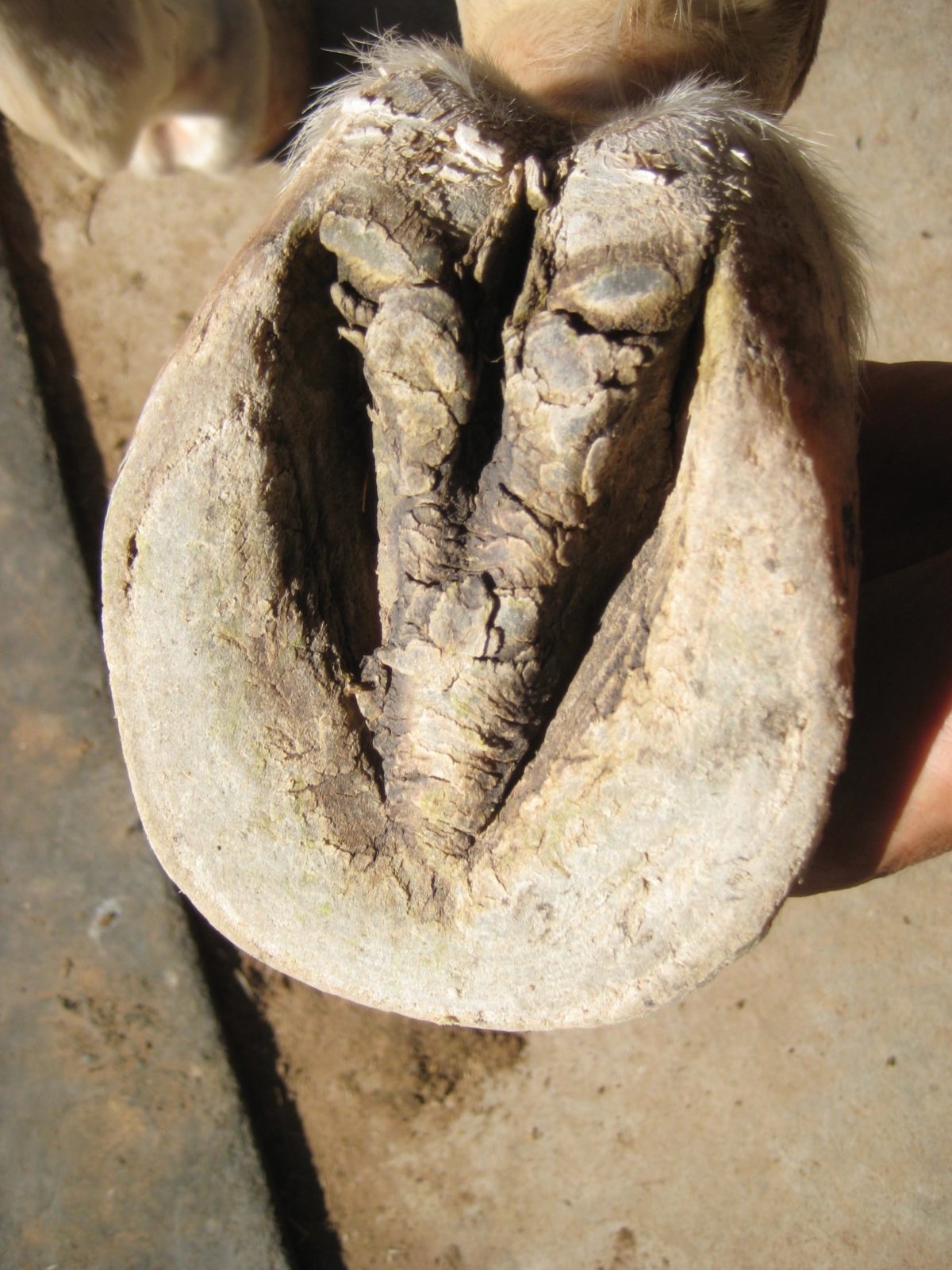 A desert hoof: thick sole and thick frog. Hardened by the elements and terrain. The outer layers are showing signs of cracks and shedding. I won't help that process, but leave it alone and let nature do its job. There is no thrush anywhere, so I do not see any reason to start cutting anything off. 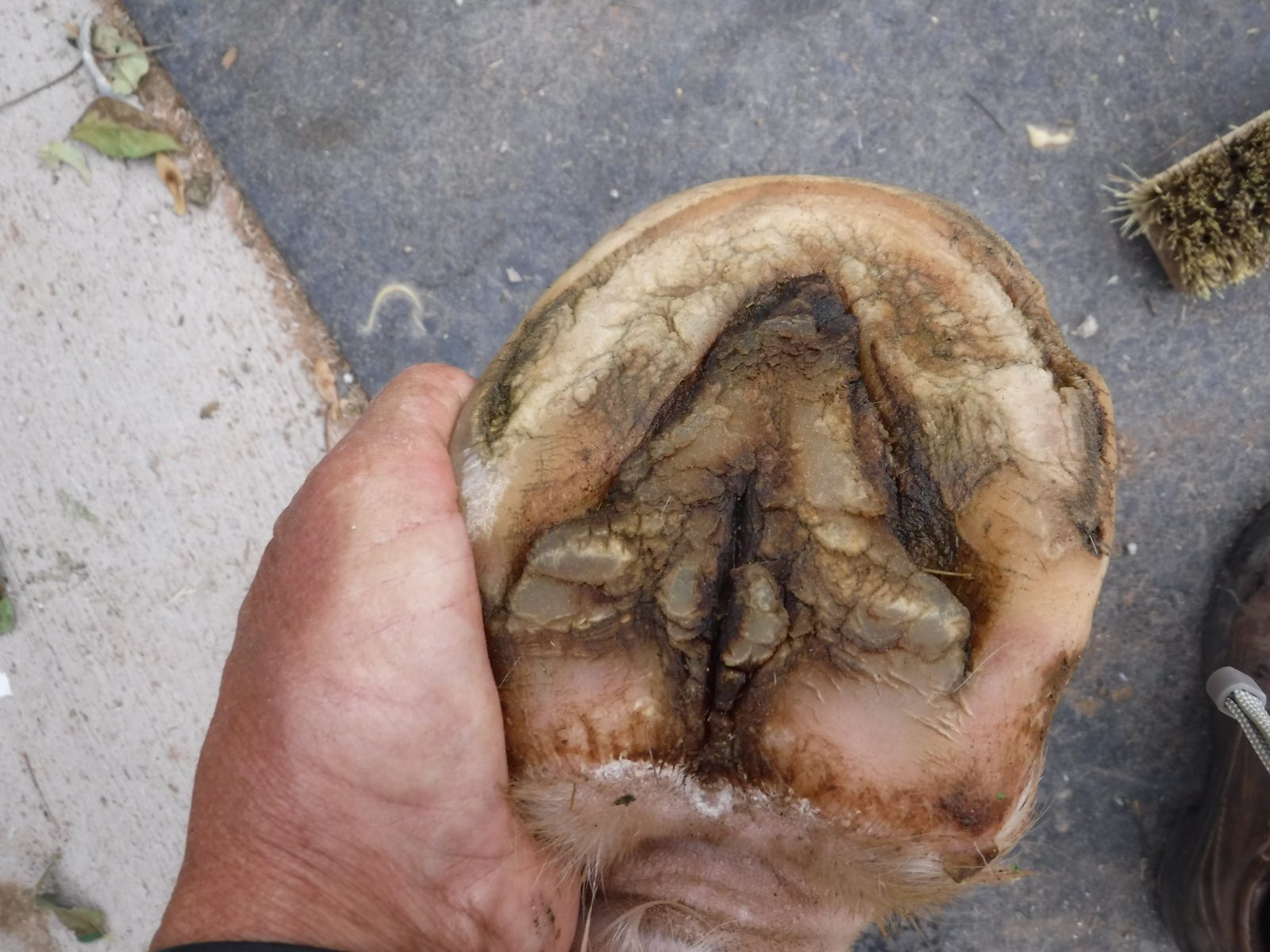 Thick callus with a deep central sulcus. Thrush? Unlikely, no smell, no sensitivity, just a deep sulcus because of summer dryness. I am leaving it as is. 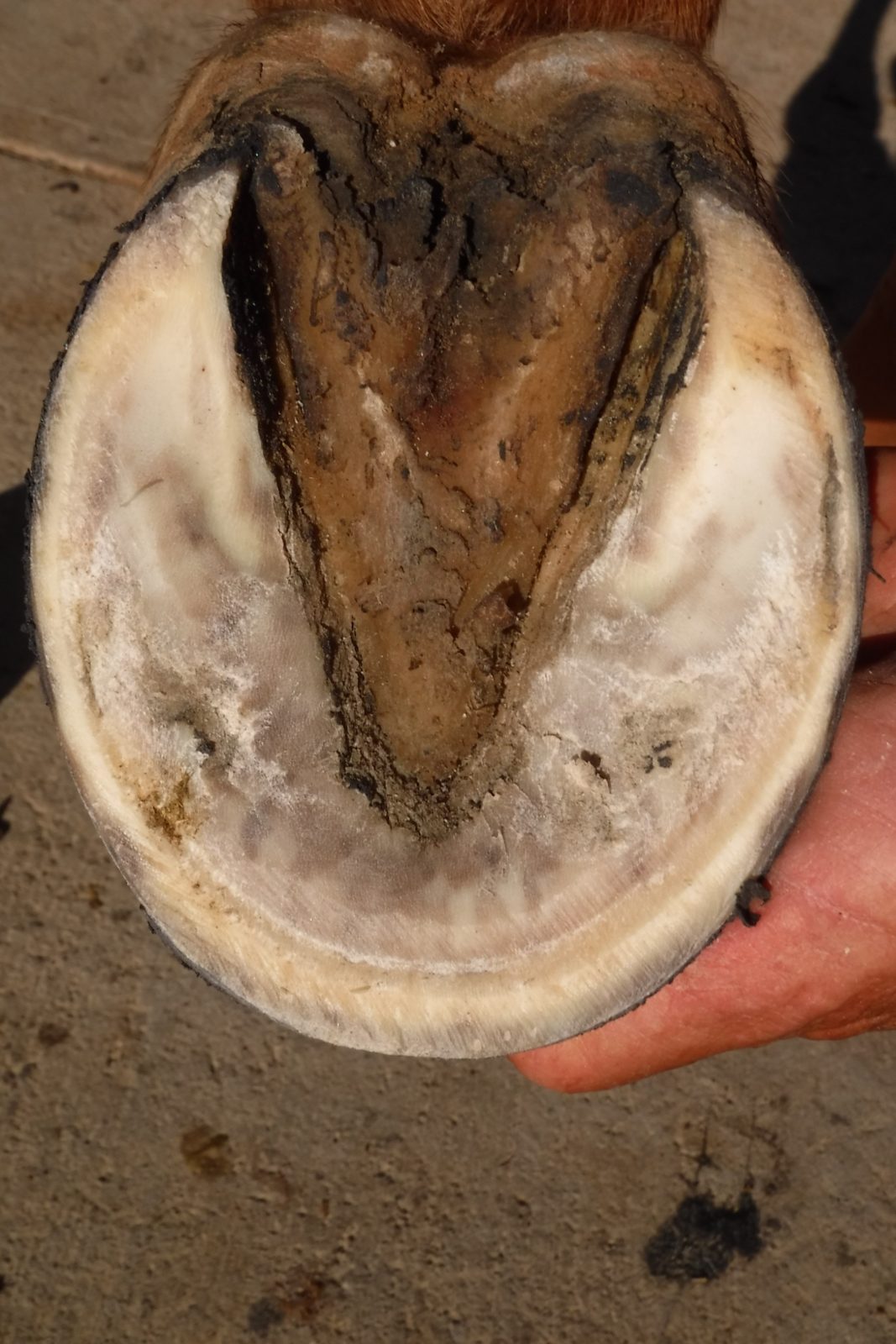 Looks like the outer callused layer of the frog was just shed. Whether by terrain or with help of a trimmer, I do not know. Obviously the hoof trimmer followed the principle of trimming the heels to the widest part of the frog. That hoof now is compromised and probably not a good candidate to be ridden without hoof protection, frog and sole will be sensitive for a while now. 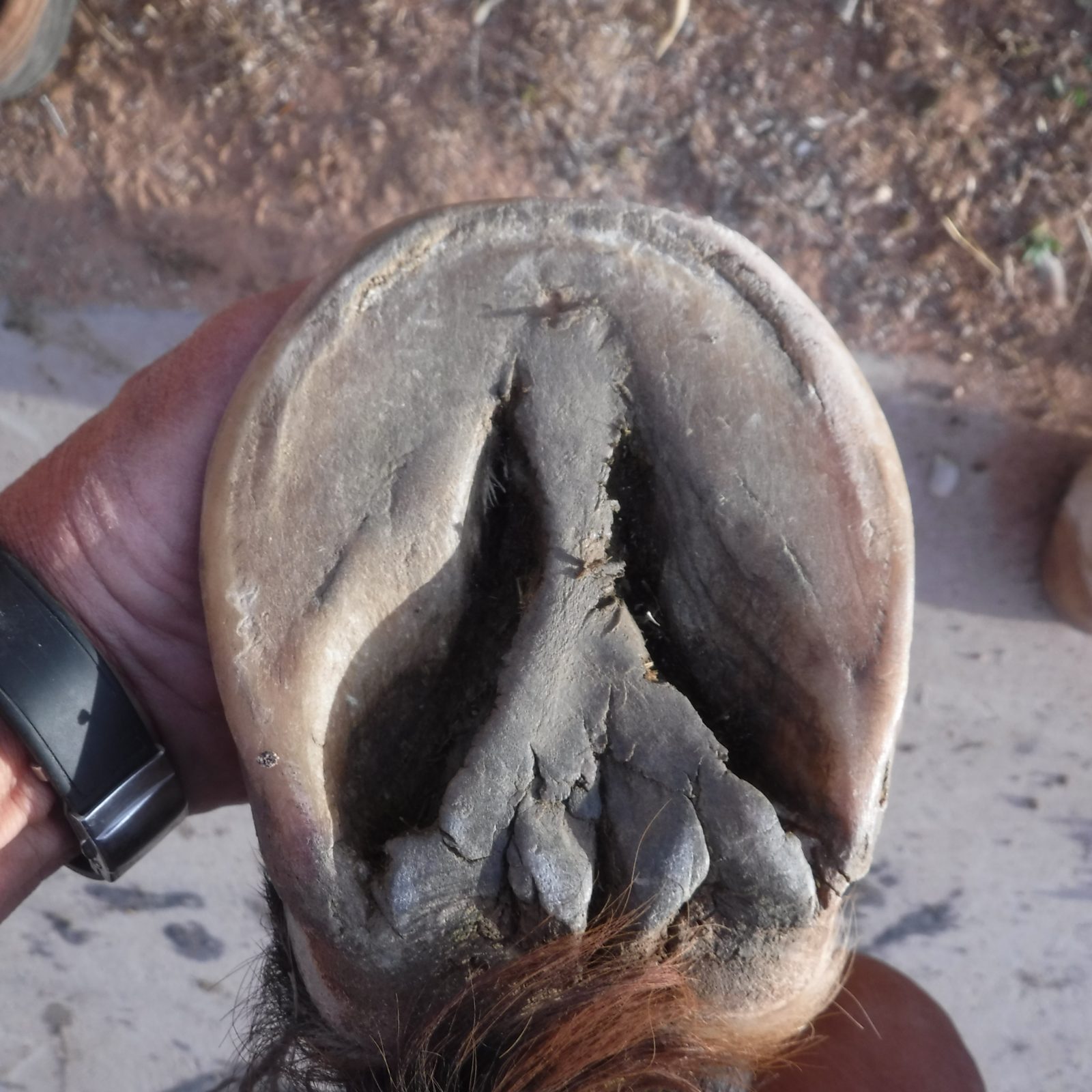 Good one above. Analysis: thick sole, probably a double sole. Frog tip connected to sole. Frog flaps with thick callus. Horse travels sound over rocks without any hoof protection for many many miles. Admittedly, that frog does not look "nice". But it certainly is functional, tough and thick. Cutting anything off that frog would compromise his bare footed travel. I leave it as it is, even that connection with the sole on the tip is not harming the hoof, but protecting it even further. 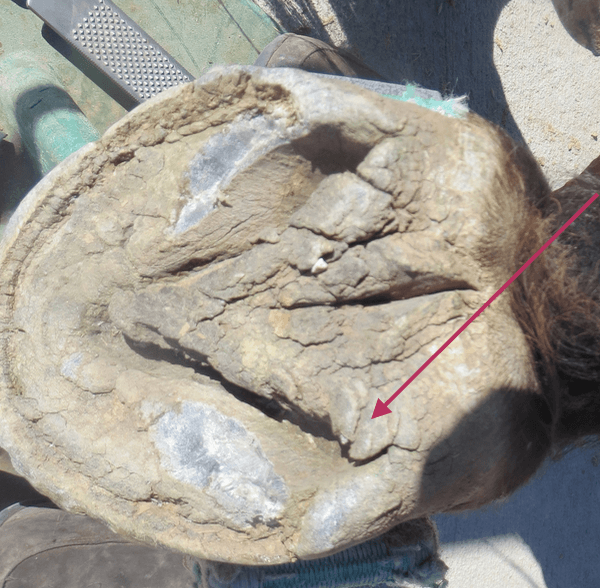 That hoof needs some trimming, some of the overgrown bars already were shortened. But let us just look at the frog now: cracked, thick callused frog with dry central sulcus. I do not trim anything off here. At red arrow tip: flap material is growing laterally to hold soil and to increase heel support area. These flaps are useful, I will leave them in place as they have been growing. 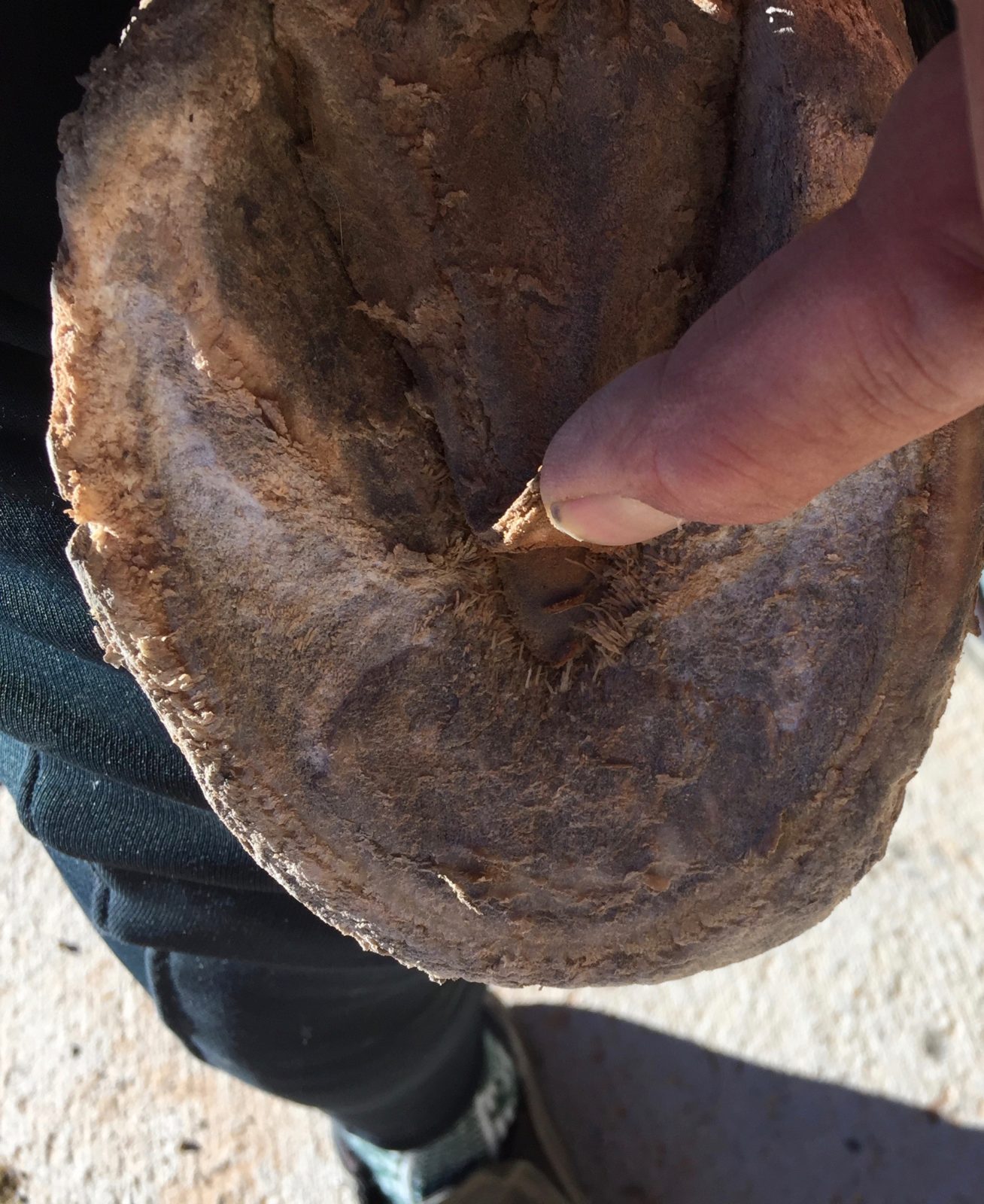 Frog tip is starting the renewal process and peeling. Do I help and cut it off or let nature do its job? Obviously it is not quite ready to peel itself, if I cut it, the frog tip will be sensitive and I will have potentially harmed the hoof. 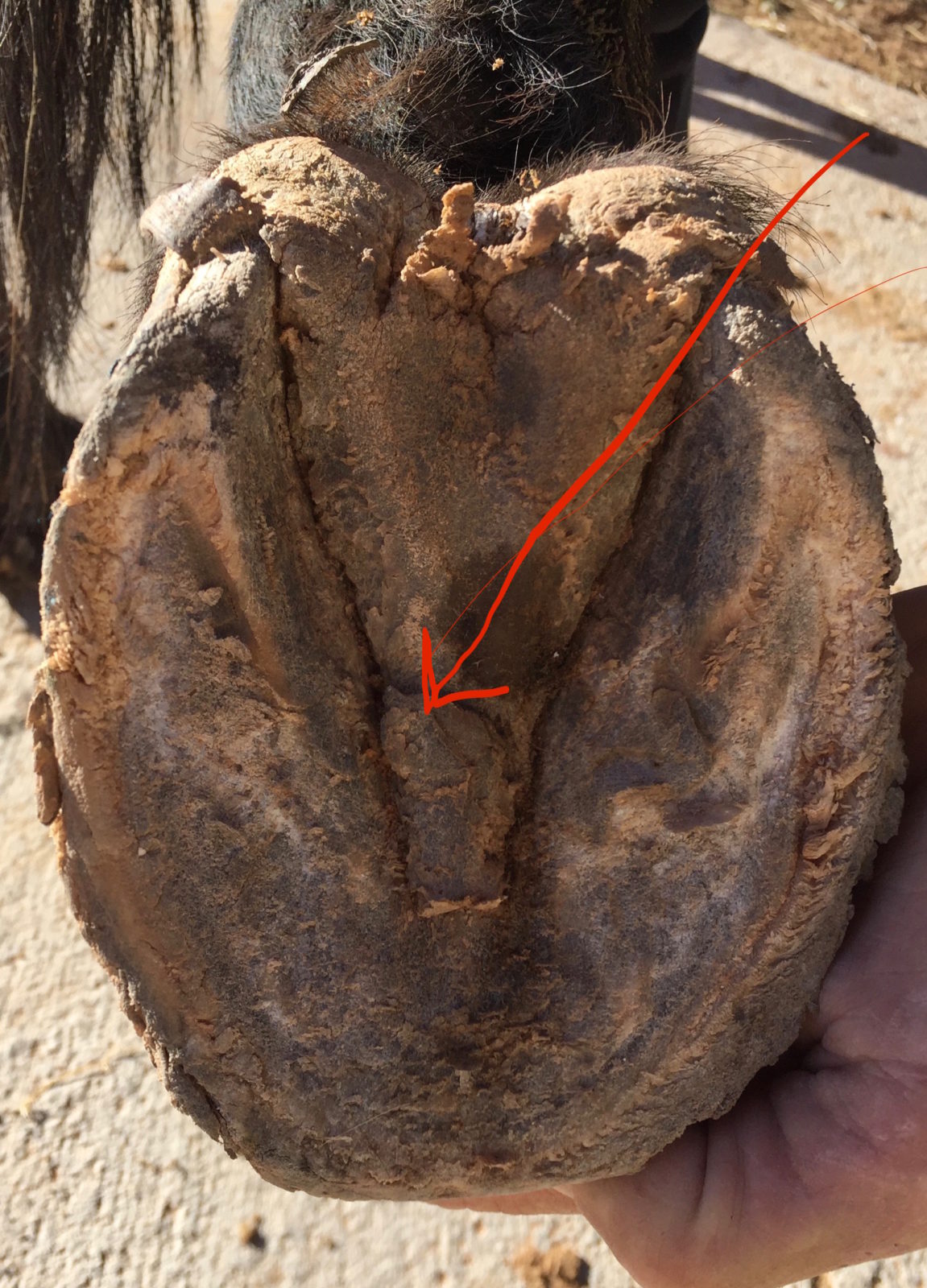 On the opposing hoof of the same horse, the tip has shed itself of already, next part is also trying to come off. I do nothing and leave it alone.

Now to an interesting question:

What to do about flaps and fold overs that are often observable on the frog? Generally these flaps are there to hold dirt which in turn again stimulates the tissue. Often they grow there where the hoof considers them most useful. I am always amazed on how nature takes care of the areas in need. Building materials are expediently sent there.

Lets have a look at these frog flaps: 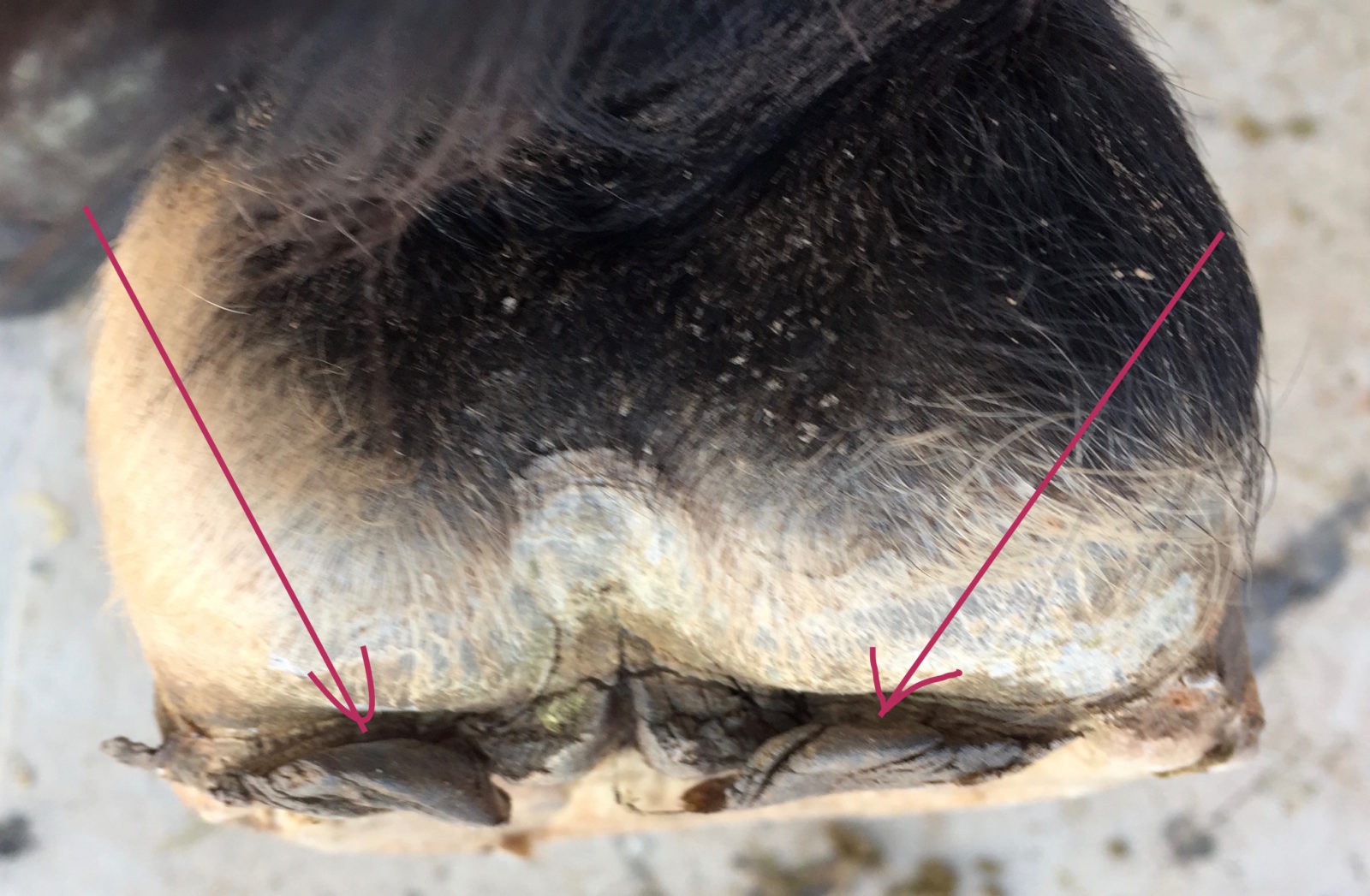 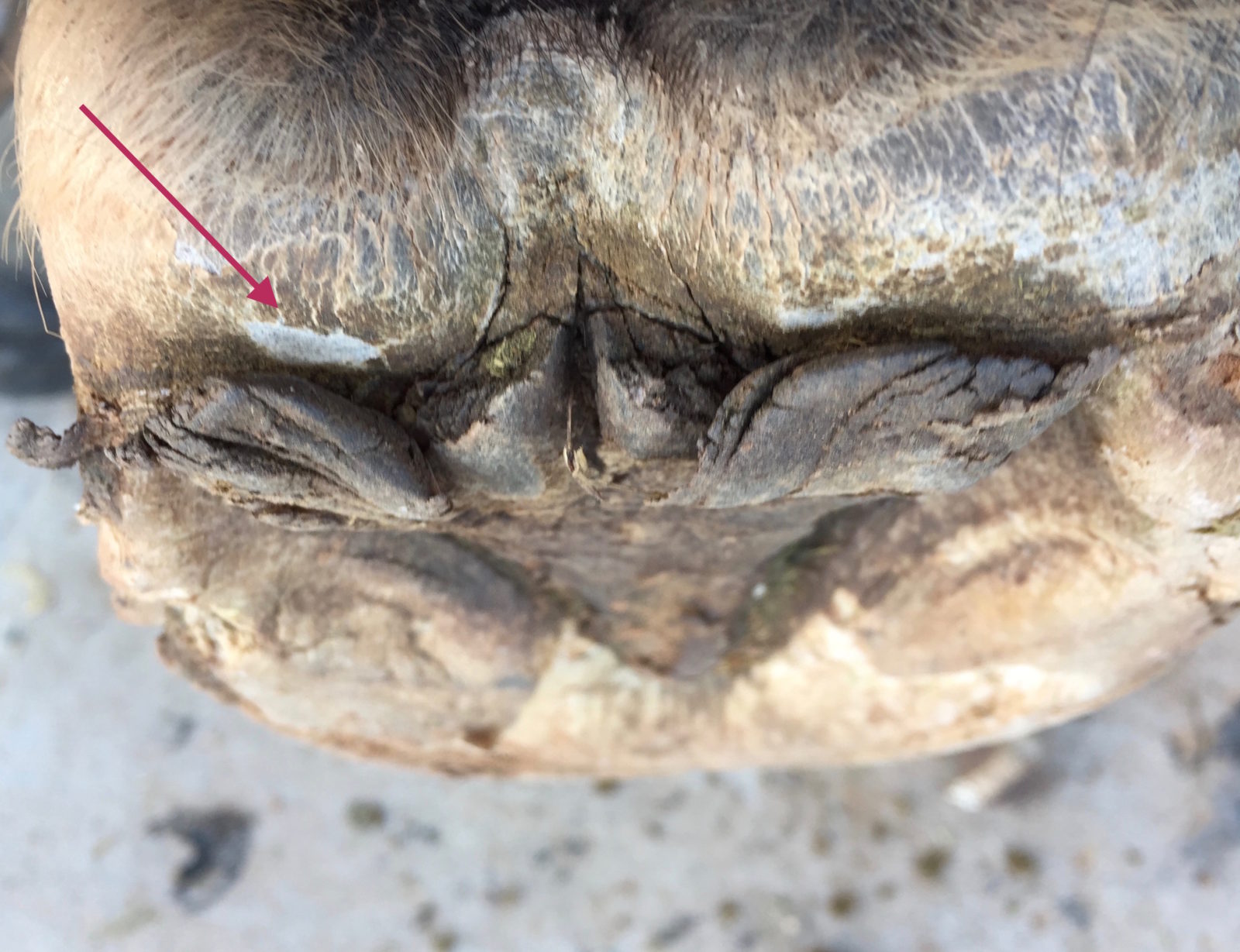 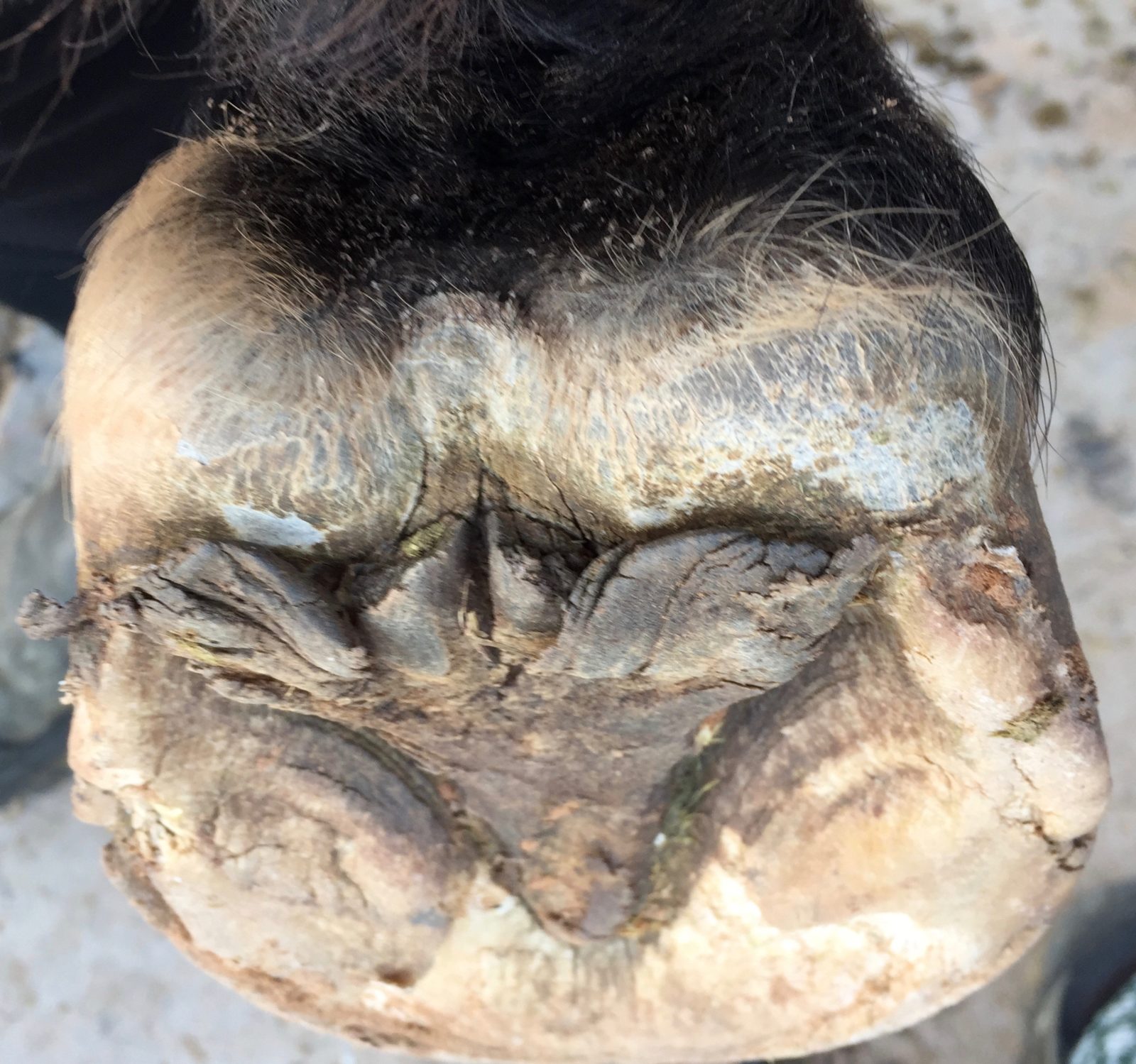 Same hoof with slightly different photo angles for better understanding. That hoof shows very low heels, in fact the heel bulbs are so low that they are running the risk of getting bruised and injured when encountering rocks. These flaps grew at the right place to protect the bulbs. In the second frame the red arrow shows a slight abrasion from the movement of the flap against the heel bulb. Possibly also from soil or sand rubbing against the skin. Removal of these flaps would endanger the bulbs. These frog flap extensions also increase the load bearing surface area of the whole foot.

But, these flaps also can harbor bacteria and fungi, one might object. True enough. How to safeguard against this and more about frog pathology, crooked frogs, recessed ones and how to deal with them and correct them all I will cover in next months blog, Frog Talk – Part II.