The Flip Flops have been tested now in several endurance races. Absolutely no failures whatsoever! They have been working better than expected. Garrett Ford, owner and CEO of EasyCare Inc, posted on his FB page how the Flip Flops were on one of his horses hooves for over 8 weeks now and are still totally intact. On my blog from last month, Flip Flop In Action, I outlined the success I have had with them during the last few months, in training and in endurance races.  Since then, another one of Global Endurance Training Center’s horses, Medinah MHF, won the Antelope Island 50 Mile Endurance event and also was awarded Best Condition, wearing the Flip Flops. 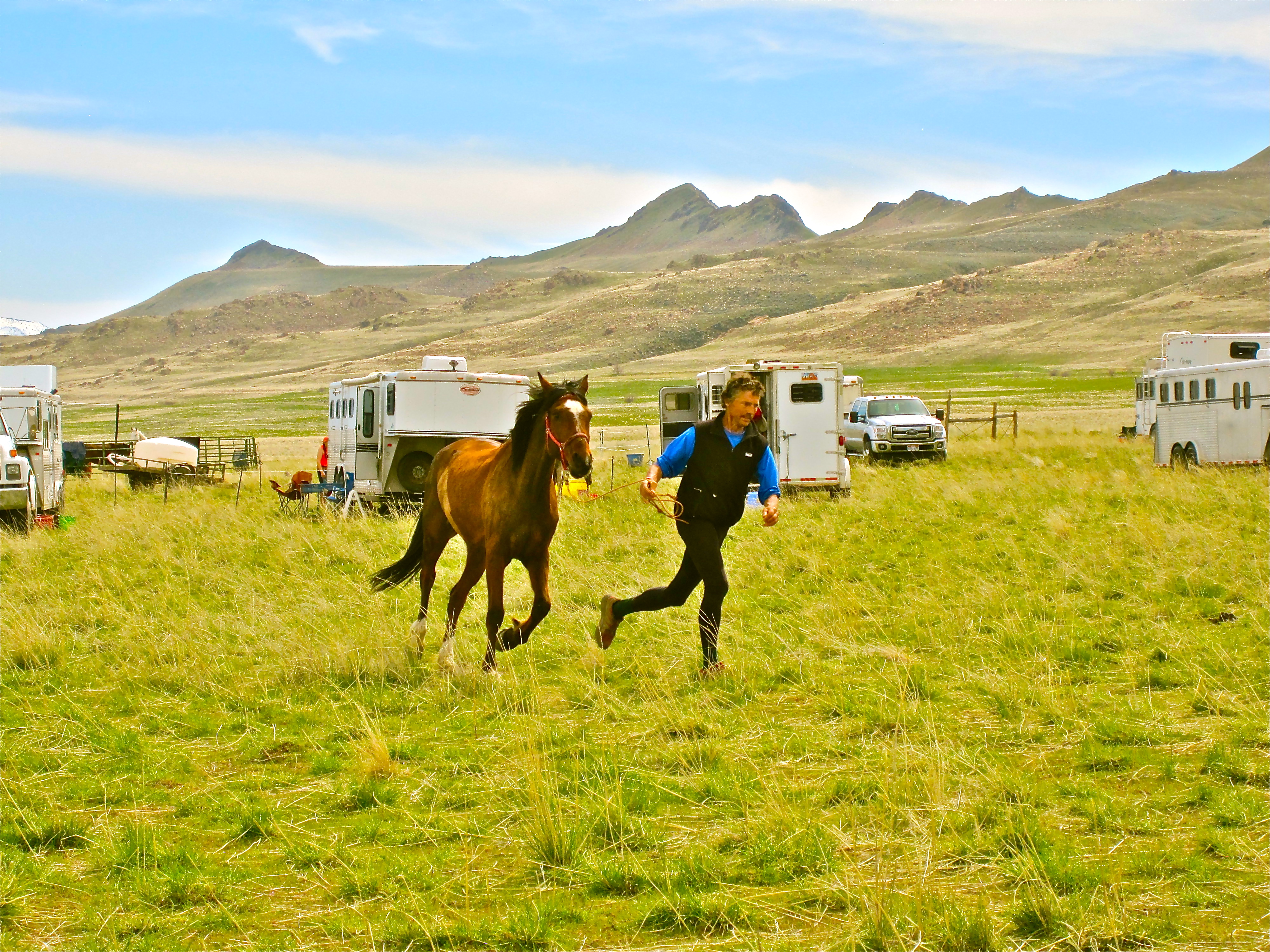 Trotting out Medinah MHF wearing Flip Flops for the BC showing.

So we now know and have proven that the Flip Flops work well. But why would we want to select a Flip Flop, and how do we choose from all the excellent EasyCare products which hoof protection to use for any particular horse? Why select a Glove over a Glue On, an EasyShoe over a boot, a Performance N/G over a Compete or a Sport, just to name a few? What criteria are we using for this selection?

– The Flip Flops come with a healthy amount of heel extension. This is supportive for the tendons.

– The Flip Flops are easier and faster to apply compared to the Glue-Ons.

Hooves that are soft and would strengthen and benefit from increased exposure to air could be good candidates. Horses with soft and long pasterns will receive additional heel support and prevent the over flexing of the pasterns and tendons. 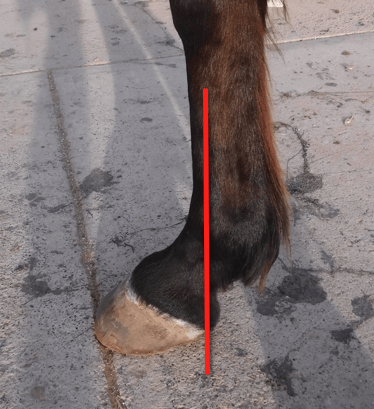 When drawing the plum line through the center of the coffin bone, we see that the (red) plum line falls behind the heel support. Not an ideal situation. 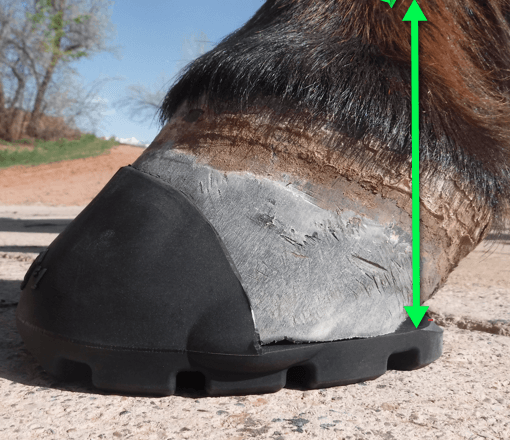 With the Flip Flop, the center of the canon bone is supported now. The pasterns are less likely to over flex and risk tendon injury.

Here is a different example of a hoof that could greatly benefit from a Flip Flop: 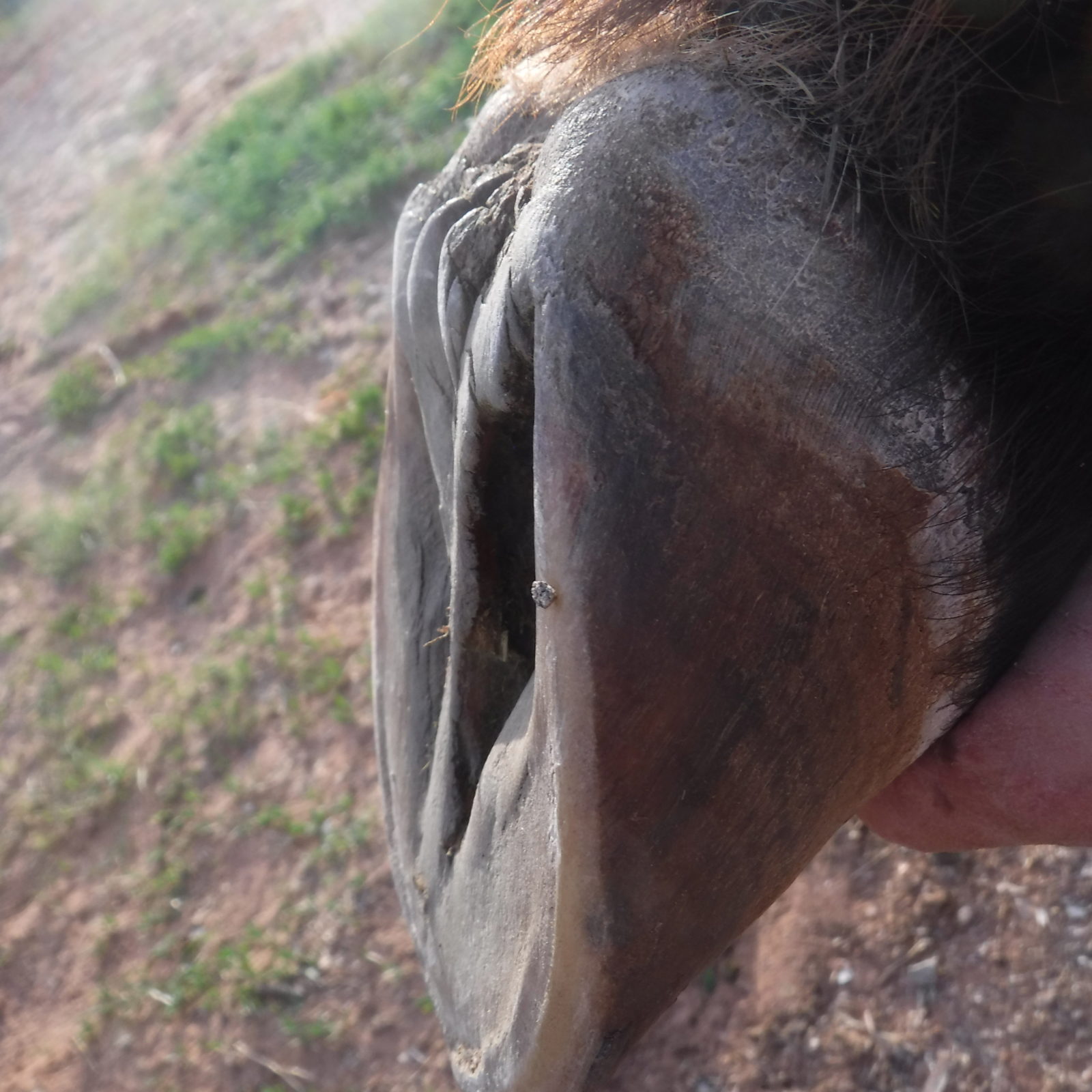 Hardly any heel growth observable here and the bulbs are almost flat with the heels. A Glue-On boot would be less favorable, while a Flip Flop will give not only support, but might also foster heel growth.

On the other side of the spectrum, let’s look at this hoof and fetlock: 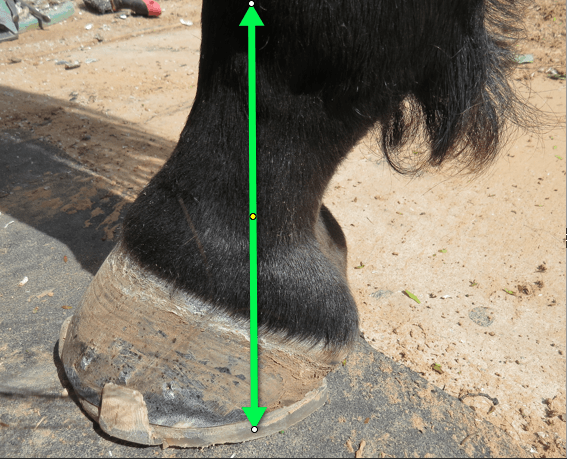 When drawing the plum line through the center of the canon bone, it comes out well ahead of the heel. Hooves like this, with more upright and short pasterns don’t necessarily ‘need’ the heel support of the Flip Flops. They will do really well with Glue-Ons or Gloves or, like in this case, with EasyShoe Performance N/G.

When applying the Flip Flops, there are several options in regards to the sole. The fastest and easiest way is to just leave the sole as it is, not applying any sole glue whatsoever. I did use the Flip Flops without adding any padding, glue or other fillers to the sole. It worked very well. I never had a rock or any debris get stuck between the boot and the sole. I believe that the constant movement of the Flip Flop is helping to keep the sole clean. Furthermore, the sole is getting exposed to air and will stay hard and conditioned. Although I never had anything get stuck there, for endurance races I personally prefer to fill the bottom of the sole with some fillers, just to guard against the odd occurrence that a rock could get wedged in there and cause me some headache. I have a ‘zero tolerance’ policy in place for endurance rides. Nothing left to chance, I will safeguard against anything that I know could possibly happen.  I tried the Sikaflex and it worked okay, but it is a little cumbersome to deal with; the Sikaflex squishing out from under the boot for a few hours and having to confine your horse for that reason. A better solution is the use of Vettec Equipak, Equipak Copper Sulfate or Equipak Soft. The Soft is designed for really sensitive hooves. It does not adhere quite as well to the sole compared to the other two Equipaks. For most horses, the Equipak and CS work really well. I like the Copper Sulfate added to keep the bacteria at bay. Because of the copper sulfate added, the CS stays softer after being cured when comparing to the regular Equipak. 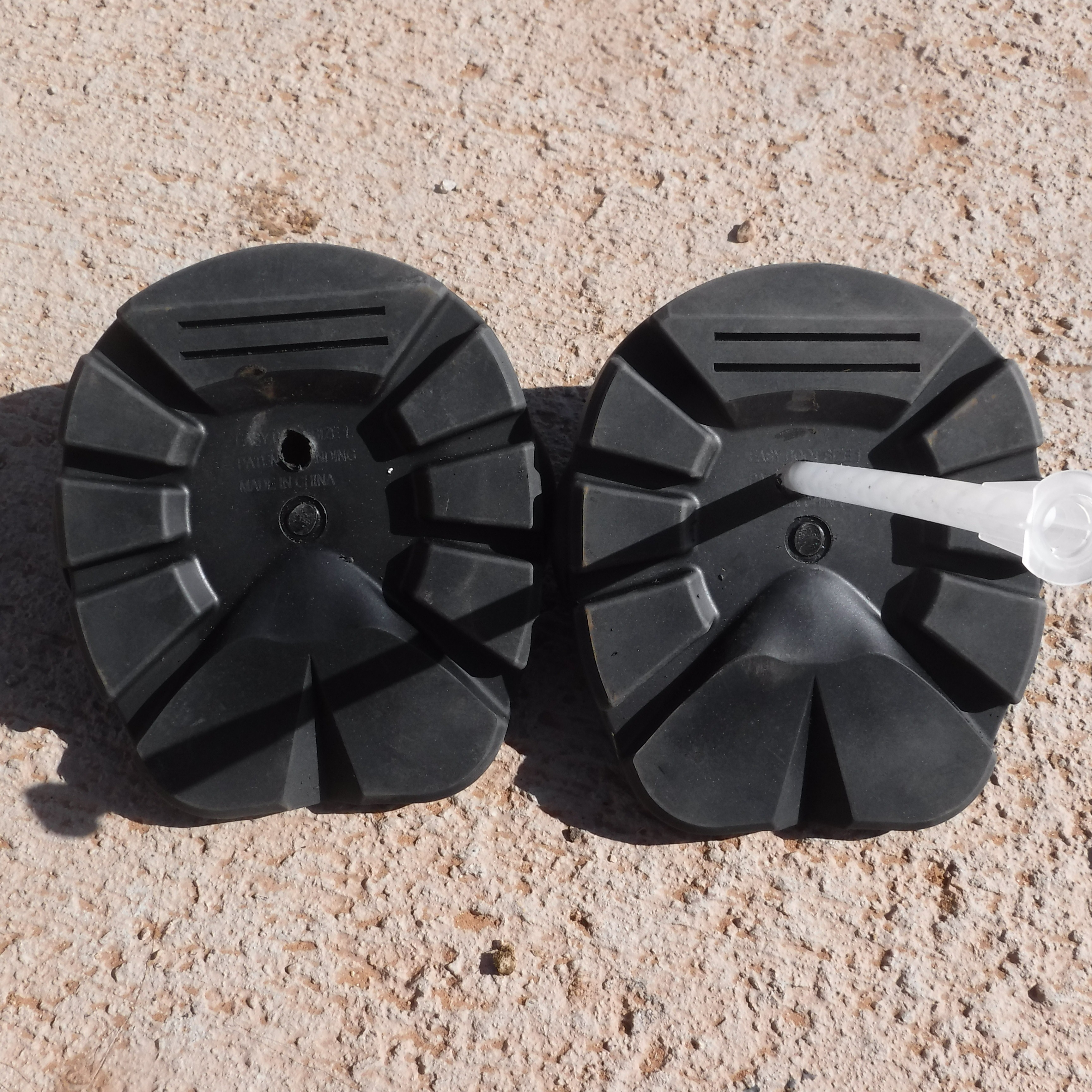 Below an example on how a Flip Flop will look with the Equipak CS applied to the sole. 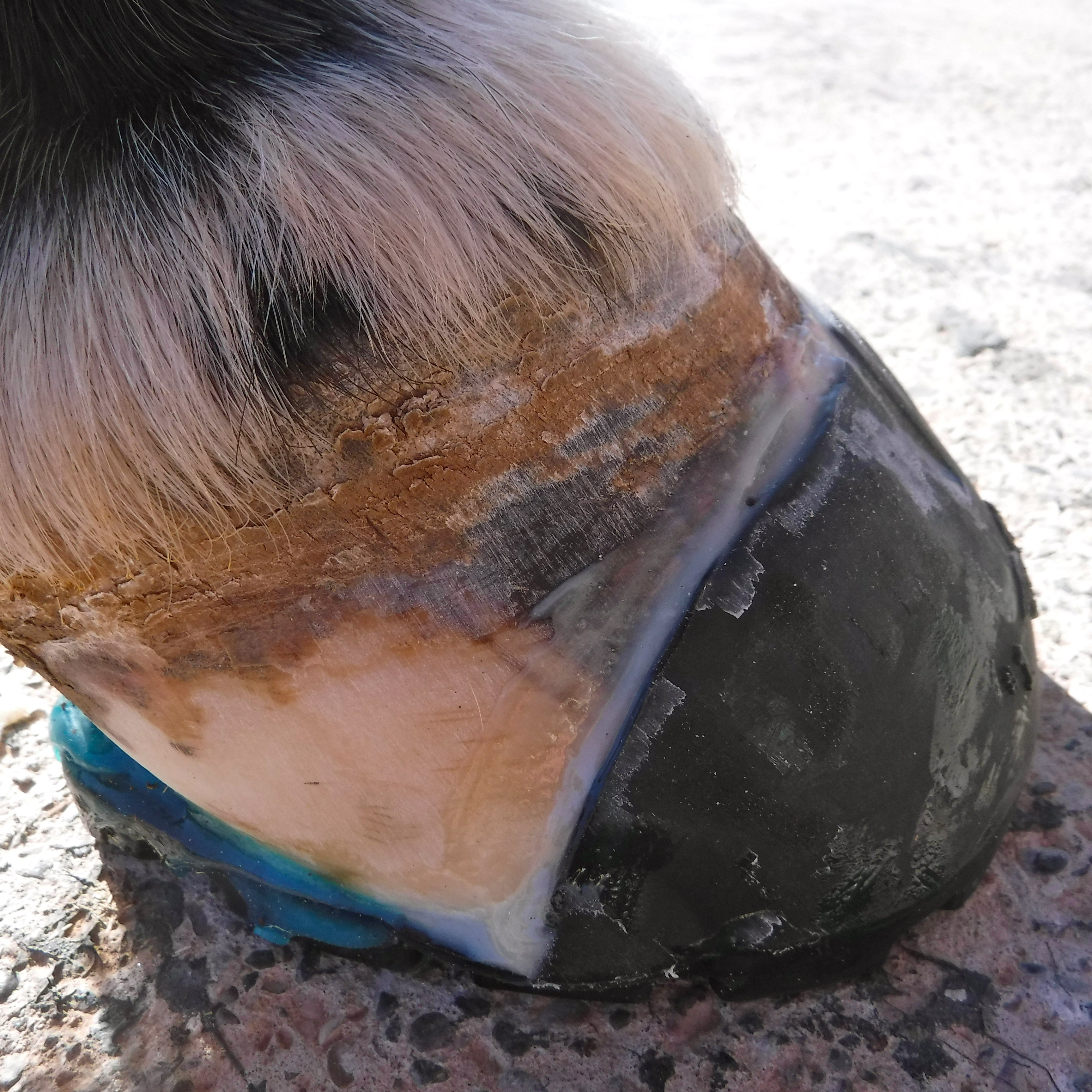 These boots are still in place now after about four weeks of application and two endurance races.  No separation or seam breakage visible at any place. No real reason to take them off, would it not be for the fact that the hooves need trimming again soon.