We got our first snow a couple of weeks ago, and another storm a few days later followed by rain, so we’ve got about 4″ of snow laying on the ground… some of which covers ice but you can’t tell until you hit it!  I thought yesterday’s sunny 34° weather would make a perfect day to test the set of studded Easyboot Gloves that arrived last week. 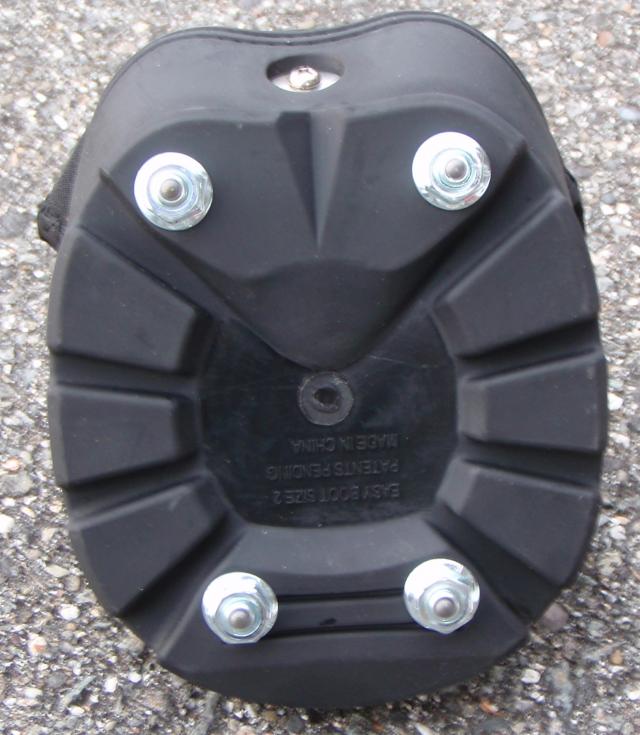 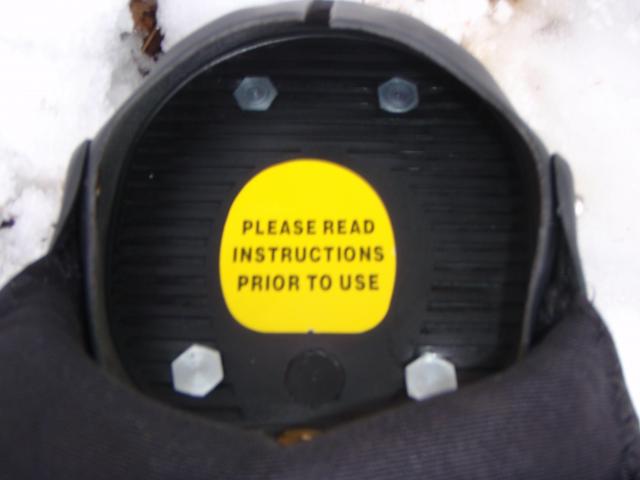 I had to tie to the telephone pole in my driveway because there was so much ice around my trailer that even I didn’t want to go there without my YakTrax on my boots!  I wanted him to have his studded boots on before we went up to the trailer to tack up.

It’s been pretty cold lately and our garage / grooming area is still out of service due to a remodel, so I haven’t trimmed Zephyr’s hooves in about 3 weeks.  For that matter, I haven’t really looked very hard at them either so I wasn’t sure what I’d find when it came time to see if I could get the boots on.

Luckily, his hooves looked great!  The quarters had been badly stretched at the end of the summer, but all autumn I’ve been working on bringing them tight again.  They’ve responded a lot faster than the toe flare has, but even that is looking a lot better. 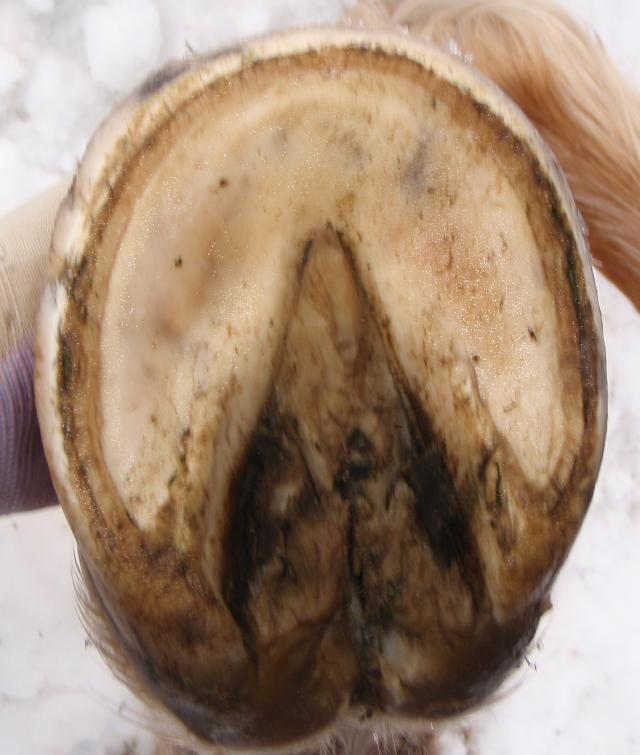 I was in a hurry to boot up and get on the trail because my husband was waiting until I left to to use the chainsaw on a deadfall tree that had fallen next to the trailer… so I don’t have as many pictures as I’d like.  The photo above his Zephyr’s right-front hoof.  Here’s that same hoof in a size 2 boot without any trimming: 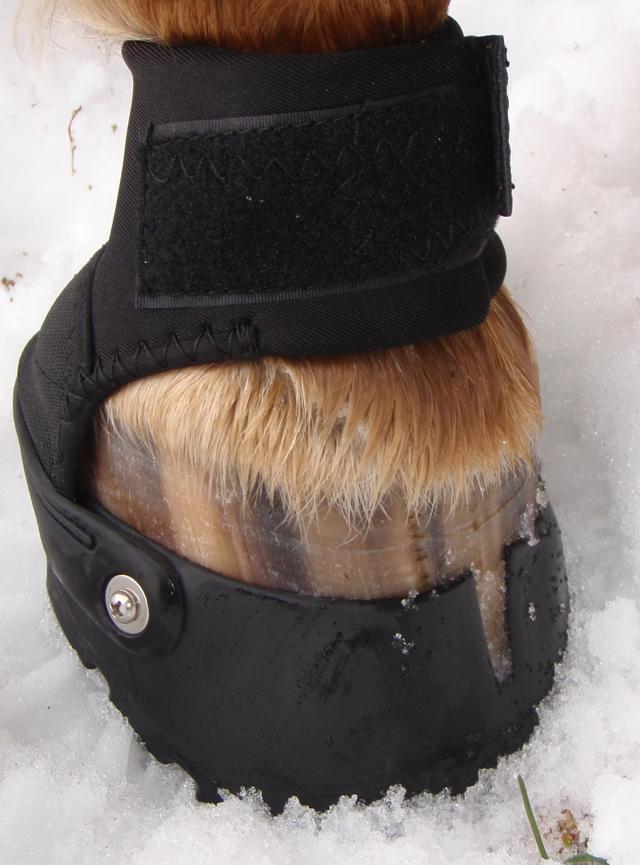 I’m pleased at the amount of spread in the V … that toe flare is really getting under control!  His hoof wall is in contact with the boot all the way down the front of the boot, unlike it has been recently.

In fact, I’m pleased to say that all four boots went on without any trimming… and that’s with the same sizes that I’ve been using since the end of the summer  (larger than he started with). The difference is that the toe flares seem to be getting under control!  I will be interested to see whether he needs to move down a size when I next trim him. 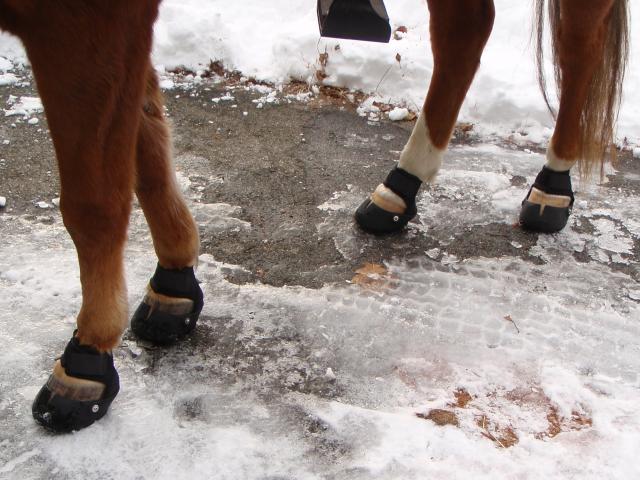 From the first moment he stepped onto the ice, Zephyr felt very secure in his boots… just like me in my YakTrax!  (This photo was hard to take without a helper.) 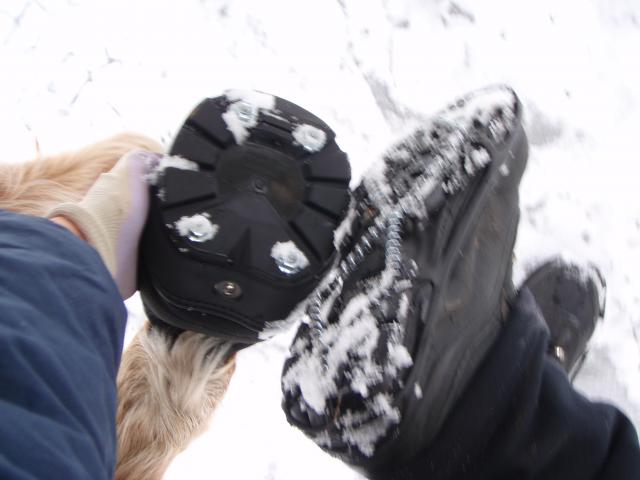 My husband needed me to leave so he could start cutting up the tree that had fallen next to the trailer.  The sunshine had deserted us and twilight would be on us sooner than we wanted!

So, as quickly as I could, I tacked up and headed down the driveway.  Zephyr’s walk felt bouncy underneath me, and I began to think safety might be a priority today.  I had planned to ride down the side of the road, but the horse-eating black garbage bag over our neighbor’s rhodedendron sent him scrambling backwards so I headed up a short trail that leads from our driveway to the neighbor’s dead-end road.

Anyway, when I turned onto the road I was pleased to find that it hadn’t been plowed.  It’s a much nicer place to ride when it’s not plowed!  And for the first time I didn’t even have to worry about hidden patches of ice, because Zephyr was wearing his new studded boots.

He felt GREAT and sprung into a trot within the first few yards.  His trot got prancier and prancier until he slipped comfortably into a beautiful left-lead canter.  YEAH, I thought!  He NEVER volunteers a left-lead canter, so this new Barefoot Atlanta saddle I have on loan must be comfortable for him, and the boots must feel good too.

He cantered on the left lead almost all the way up the next hill, and I could feel him starting to get faster and faster.  I was just leaning back to slow him down, when I felt him take three giant leaps like a bunny rabbit.  On the third leap he threw in a joyous little buck, which because he was on the rare left lead I wasn’t ready for, and off I went.

As I somersaulted gracefully through the air, I consciously kept a firm grip with my left hand on the rein and also rolled to the left to avoid being stepped on.  When I looked up, he was standing over me, looking down as if to say “well it’s not MY fault you couldn’t stay on”.

It took a few minutes to stop my legs from shaking, no matter how often I fall off it always makes me shaky.  I took advantage of being on the ground to check the boot gaiters.  They were still about as tight as I could get them while still fastening straight across.  That is to say, they weren’t very tight at all and there was some snow packed down inside but I know from experience that as they get broken in I’ll be able to fasten them tighter.

Then I led him over to a stump, tightened the girth for good measure, and climbed back on.  We walked up to the top, walked back down, trotted up the hill, walked back down, and then trotted most of the way before cantering to the top.  I made sure to keep him slow and in control this time!

When we returned and I pulled off the boots, I was pleased to find that there were no rubs anywhere, not from snow/ice getting inside the gaiter and not from the boot being too tight in the heel.  Again, I’ll be interested to see if he drops a size after his next trim.

All in all, despite the fall, it was a successful first test of our studded boots.  I never had to worry about ice hidden under the snow, and he was perfectly safe on the ice-covered pavement in my driveway.

From now on, unsafe footing is NOT an excuse for me to stay on the couch instead of riding!

Yours truly,
The Boot Maine-iac