With husband/owner Patrick handling, Fergus had his boots firmly glued on by the EasyCare Crew the Wednesday afternoon before Tevis. Despite the fact they were firmly glued, I like to be prepared so still carried an entire set of Gloves with us. If I could have, I would have carried a spare girth as well – but that’s just silly, right? (I had it in my crew box, though).

I feel the green boot bags on the back of the saddle add to the overall ensemble: 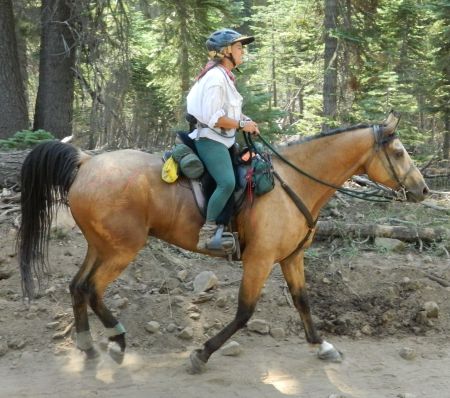 Fergus and I arrive at Robinson Flat (36 miles) still in one piece. Other than the words “check for boot funkiness” appearing in my crew notes, the boots were mostly ignored, which is how it should be. Photo by Ashley Wingert.
Other things I carried but didn’t use: 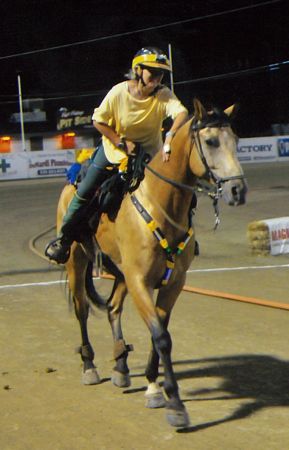 We completed the Western States Trail 100 Mile Ride in 23 hours, 10 minutes, at 4:25 a.m. on Sunday 5th August – approximately 24 hours after getting on the horse the previous morning. It was my first completion and Fergus’ first 100 mile ride.
Fergus has never in his life felt so solid, nor gaited such a distance (he generally walks big, trots bigger, and canters). Having never worn shoes in his ten years, boots have taken him places that none of us dreamed he would go. And he never put a foot wrong.
(five million word version to follow)
—
Lucy Chaplin Trumbull
Sierra Foothills, California