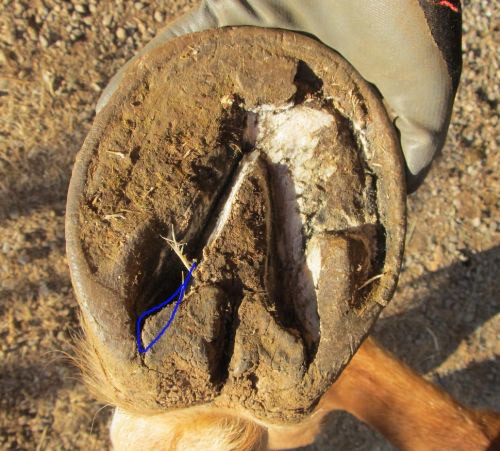 This time of year is always confusing to my “european” body – the sun gets low in the sky, but the temperatures are still in the 90s. Twenty-eight years of living in Europe tells me to put on warm clothes in the morning and I feel ill at ease pulling on summer clothes “just in case it should turn chilly” (I wish – during September Sacramento had 26 days over 90°F (32°C) and it wasn’t much cooler up in the foothills).

The pones are also reacting to the light change – I’ve noticed the beginnings of coat changes, either large amounts of shedding (only on the white haired horses, of course), or just thickening of fur.
I don’t remember the last time it rained, but all the vegetation is dull brown (and dust-covered) and green is a distant memory. The ground in the horse paddocks is rock hard with a thick layer of duff on top. Everything is ridiculously dry including the horses’ hoof walls. Trimming — even with sharp nippers — has become a bicep-bulging fight. I’ve tried presoaking but it doesn’t seem to make a lot of difference and, in any case, with my organizational skills, the interval between me deciding to trim and actually doing it could be termed “instant” and if I waited until the hooves were pre-soaked, I’ve usually wandered off and found something else to do.
It’s always interesting to see how the season changes affect the state of the horses’ feet. Every horse I’ve trimmed in the last month or so has been sporting about a quarter inch of dead sole and shedding frog – practically falling out and begging to be chomped on with my nippers. Under normal circumstances I try to be fairly conservative with sole removal to maintain that tough, calloused surface, but this stuff needed to come off.
Below is Hopi’s long-overdue-for-a trim front foot. He’s currently on vacation, so not self-trimming on abrasive surfaces. The missing sole on the right easily fell out on it’s own when I started picking out his foot and the area around the toe (usually left alone – the toe callous area) could be easily pried out with a hoof pick. This stuff is more than ready to come off. Nom, nom, go the nippers…

Although I’m not finished, I’ve started tidying up his frog in the above photo. The area circled by blue will also get trimmed back to prevent crud getting stuck in there and getting thrushy. The trick with frogs is avoiding getting carried away and making them look like something turned out by Martha Stewart, but trimming off any nooks and crannies that could harbour junk.
Below (not terribly good photo, sorry) I’ve poked my hoof-pick under a flap of shedding frog. When this is removed, the area circled in blue (above) may well come with it. Again, you don’t want to take off too much – this is a supportive structure – but enough to keep it healthy. 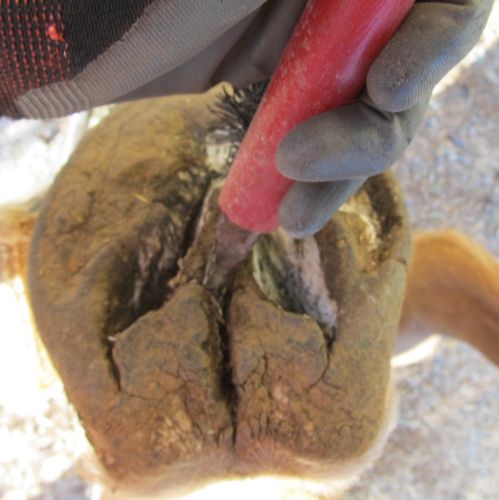 With the protective callous gone, the result can sometimes be a horse that’s a little tenderfooted for a few days. Popping on boots is an easy way to get around this problem – with no mud to deal with, boot application takes seconds. But with our current climate the newly-exposed sole on most horses dries and toughens up in a few days as if nothing had happened (except, perhaps, that they’re no longer walking on lumpy soles).
Here’s Hopi’s other front foot – about three days after trimming – when freshly-trimmed, this sole looked a lot like the exposed area shown above. Now it’s hard and tough again. 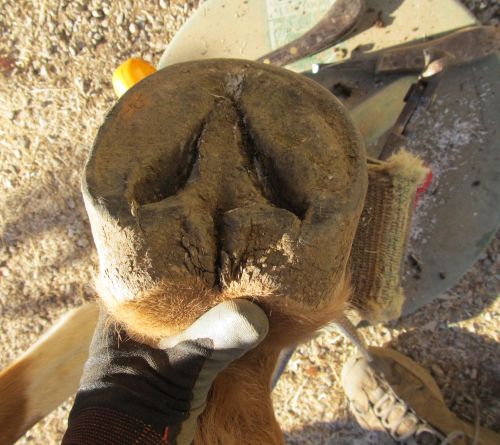 Small Thing and I have been going out for 1-2 hours excursions the last few weeks and I haven’t bothered to boot him once – he just hasn’t needed it. His little feet are hard as hard things right now and he rarely bobbles on rocks. He does need trimming – or more specifically his ever-enthusiastic pony heels need trimming – but I’m loath to do it for fear of encroaching on his toughened soles. It’s become a balance – can I ride him enough on rough surfaces to keep him “self-trimmed” or do I need to resort to a trimming session?
Small Thing and me above Hwy-49 and the Confluence of the North and Middle Forks of the American River 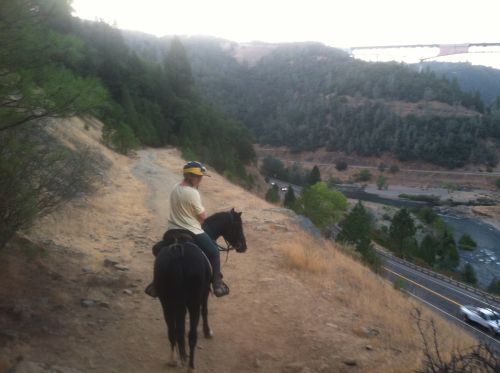 Unfortunately, most of the time he’s running around [persecuting the other horses] on the layer of paddock duff that is luxurious to roll in but doesn’t do much by way of abrading feet. I have a feeling Small Thing and I have a trimming date in the near future. 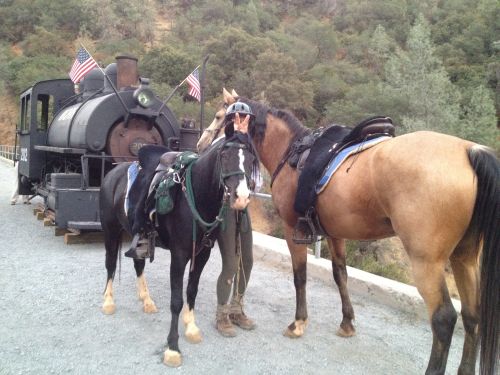 Small Thing and Fergus visit the train on “No Hands Bridge”, put there for the 100th Anniversary.
At a time when many people’s riding seasons are coming to an end, I’m looking forward to cooler temperatures and therefore more energy for riding. Right now, a dry winter is being predicted – good for lack of mud and clear trails, and good for hard little feet to stay that way. If it wasn’t for the early onset of dark, this would be the perfect time of year.
—
Lucy Chaplin Trumbull
Sierra Foothills, California