The Owyhee Fandango at Oreana last month was not Thunder’s day to shine. We’d been doing so well but the day ended with a pull at 65 miles into a 100 miler. A 100 miler that I had many misgivings about entering thanks to the cold wet weather and I just had a general bad feeling about riding it. But in the end I told myself I was being a weather wienie and I came to the do the 100 so I had better just do it. That didn’t get rid of the knot in my stomach and the nagging thought that something was wrong.

We started the 100 with leaps and bounds and once he finally settled down into some forward motion we actually started to get somewhere. The day was progressing nicely and we were beginning to make up some lost time. But late in the day he would take an occasional “off step” usually in the rocks or on the hard gravel roads.

I thought to myself that he felt a bit foot sore. “Can’t be!” I thought. I trimmed him a week before the ride, same as always. We had the Gloves all around, same as always. How could he be tender? But he continued with an occasional off step, very inconsistent, and at the 65 mile point I told the vet, David Hayes DVM,  “We’re done. He’s a little off.” And as he trotted on the gravel, the vet could see that yes he was off. So we rode back to camp in the trailer, first time in a very long time. Later that evening, Robert Washington DVM checked Thunder again and he was no worse, which was a good thing. 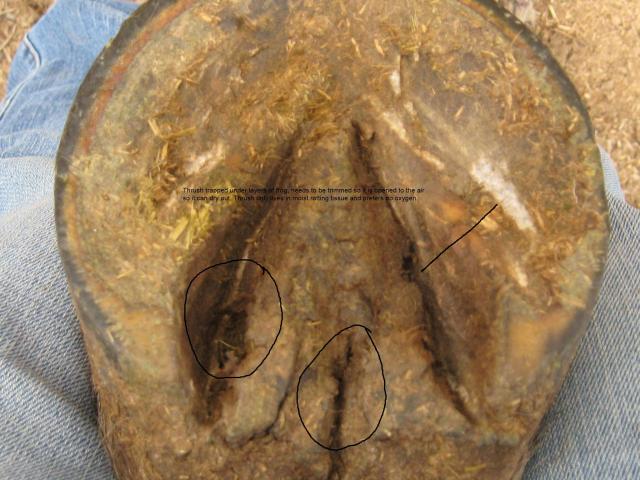 In review though I realize that we had a LOT of rain in camp. Everything was soggy to standing in water. When I got home the day after the ride and picked out feet, they contained mud and small rocks and the frog was a wet mushy mess. The wet mushy frogs also showed some signs of thrush, a bacteria that loves wet conditions along with some manure. The thrush may not have been the whole problem but I am pretty sure that it was a contributing factor. It hadn’t bothered Blue’s performance because he was ridden the first day, not the third. He probably hadn’t grown any thrush at that point, but now had some thrush too. So I trimmed their frogs a bit to allow it to clean out better, then I applied a hoof preparation containing tea tree oil. Tea tree oil is great for killing bacteria and fungi. I have been doing that daily as we have still been getting rain. 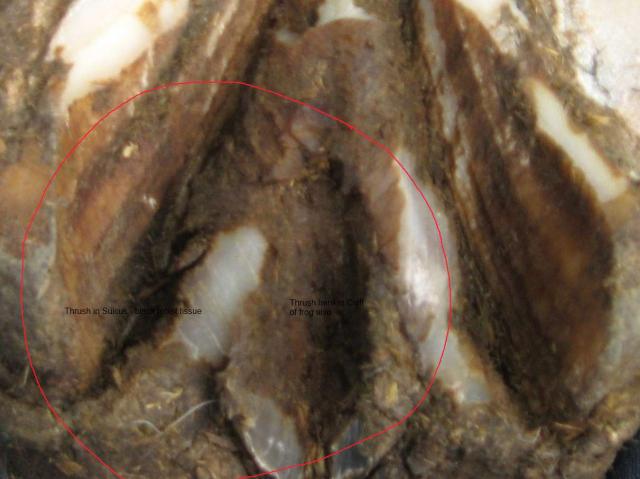 Sunday I took Thunder for a short ride, barefoot as usual. Again he seemed slightly sore-footed. I rode just far enough to determine he was fine in the sand but not on the hard surface. Then we turned and went back home.

Tuesday I decided to try it again, only this time with Gloves and I dug out an old but hardly used set of the dome comfort pads and put on the front. I had used the pads on Hollie with the Bare’s a couple times, but never with the Gloves. It was a good day for an experiment. I wanted to see if the pads would keep the softened frog and sole from being tender. We took the exact same trail that we had taken on Sunday when he was not-quite-right. After a bit of just walking I thought his stride felt longer and stronger. We trotted and every foot was hitting the dirt just like they should be. Not one misstep, the stride was strong and full of his usual tigger-bounce. 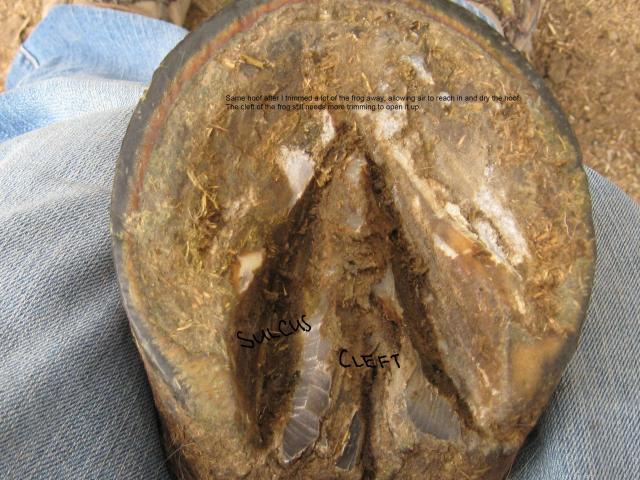 The comfort pads in the Gloves worked great. I see no signs of thrush at the moment but we still have rain so the hooves remain a bit soft. With managing a barefoot horse I believe that we are continually learning. Heck with horses we never learn it all anyway! From now on I will think about using comfort pads on a ride when the weather has been wet and the hoof has softened. Seldom do we get that much rain so my brain was definitely not thinking in that direction. But I always look for the lesson from my mistakes or failures, thats just the way I am.

Now that I have the thrush under control and the weather is drying out I am just keeping the hooves as clean as possible. Keeping them picked out allows air to get in and dry the hoof so the thrush finds it hard to survive. As our usual dry weather sets in the frogs and soles will harden up again, nature’s way of maintaining a healthy hoof once again.