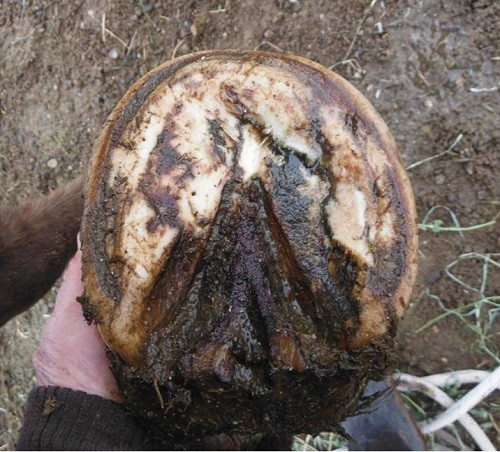 We’ve all heard the joke, “Talk to the hoof!” But what we really need to do is listen to the hoof. Every horse’s hoof has a story to tell. If you look and listen, it will reveal approximately a year of its past. It’s a great way to learn the history of a new horse or just know what is happening within your horse.

Any injury that occurs to the coronary band leaves a mark or scar that grows out down the hoof wall. The injury can be from a cut, scrape, a broken abscess, quitter, and stress to name a few. The coronary band feeds the hoof and it is similar to the cuticle of your finger nail. The hoof below shows such a mark portraying prior injury. 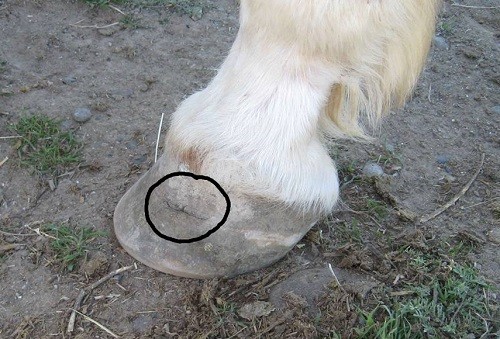 The hoof above has a horizontal line indicating a wound or injury to the coronary band of the hoof. It takes about a year for these cracks to grow all the way down and be gone. This horse has a scar to the coronary band and there is always a bit of a lump and discoloration.

A hoof abscess is a localized bacterial infection in the sensitive structures of the hoof and is a leading cause of lameness. Typical signs of a hoof abscess include sudden and severe lameness and pain. The horse bears little to no weight on the leg with the abscess as they are extremely painful. The hoof may be hot with an increased digital pulse. This is because as the pus and infection build up, the sensitive laminae become tender and swollen. Yet due to it all being inside a hoof capsule, the swelling has nowhere to go. The pressure just continues to build and normally within a couple days it will push out through the wall and break out up on the coronary band. Sometimes if the abscess is caused by a puncture wound or gravel, soaking the hoof can open the hole and allow it to drain out.

Even though there is still dirt in the collateral groove around the frog in the hoof above, you can see the blackened areas of the sole. This is not dirt. This is an old abscess and the lines around the edges indicate the depth of the pocket. Abscesses seldom become visible until the normal trimming process begins to expose the old dry pockets. These black pockets can also be old thrush pockets from a severe case of thrush. This hoof is going to take a while to grow out but looks much better than it did 2 ½ months ago. 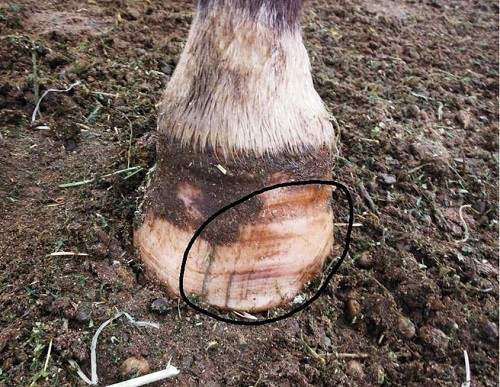 The outside of this same hoof (above) shows an assortment of lines, ridges, dents and cracks. The ridges could indicate previous bouts of laminitis, illness, fever, severe thrush or abrupt changes in his feed. In about a year’s time they will not be seen. Also notice the reddish purple coloration near the horizontal lines indicating some serious inflammation that happened within the hoof. The vertical cracks appear to be shallow surface cracks, nothing that penetrates and causes issues.

Stone bruises can create a mysterious lameness. The severity can vary between consistently off to only a bad step now and then. Diagnosing the bruise is eliminating all leg lameness symptoms and identifying the lameness is in the hoof. Perhaps you had been riding on rocks when he became lame and you have no leg swelling or tenderness so assume it’s a stone bruise. A horse out in frozen ground with a lot of ice can also suffer bruising to the sole or frog of the hoof. Your vet or farrier can possibly locate the bruise with hoof testers. Most bruises will heal and go away without intervention. Others may cause some deep bruising and possibly an abscess. Again check with your veterinarian for treatment if it is necessary. Your horse will probably regain soundness before you ever see the bruise exposed as it grows out and gets trimmed away.

This horse above became lame during a multi-day ride. Two weeks after the ride the frog shed a layer leaving new frog that was speckled red. This is the same frog after it has shed four different layers. It has not been trimmed; layers have peeled off due to a very deep bruise. Notice the discoloration circled. It really was a reddish purple. Also the circled area over the left bar shows some horizontal cracks possibly from concussion experienced on hard surfaces. 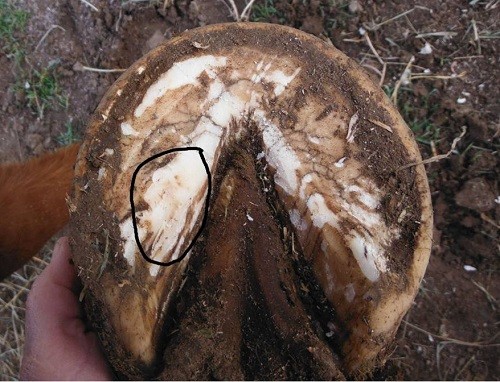 This is the same hoof after some clean up with visible bruising evident. This circled area had some red marks that I do wish showed up better in photos. Some stone bruises can become visible after normal trimming. Often they are absorbed by surrounding tissues and go unseen. As trimming progressed I uncovered a couple other bruises that did not show up in photos. You may find pink spots along the white line and also on the outer wall of the hoof.

Some of you have probably seen much worse than this, as have I. Unfortunately, I don’t have photos of it. I’ve only started photographing these and now the first thing I do is dig for the camera. I only wish the discolorations and marks showed up better for documenting these ailments. It’s a fascinating study and one can learn a lot from a hoof’s story.