The following testimonial sent to EasyCare from the UK explains the great outcome of using Protective Horse Boots, Old Mac G2’s to be exact. 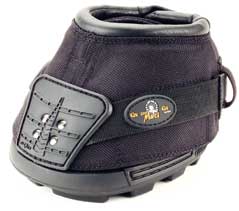 I’ve owned my cob since he was 5 years old, and he’s just turned 18 this summer. He was traditionally shod for many years, until my second knee operation in October 2008 caused me to have the shoes off, and I turned him out for a few months. I recovered much more quickly than expected, and started to ride Harley barefoot, on short hacks of up to 30 minutes on our tarmac roads and stoney tracks, and he coped, but was a bit stumbley, and I had his front shoes back on – but Harley had other ideas! Climbing the stock fencing to eat off the tops of the banks meant that his feet would inevitably slide through, and he would pull back, ripping the shoe off and a little more horn each time. I was so fed up, in the winter I was only managing to ride once a week due to the dark evenings and pressure of work, and the horse had always pulled a shoe off!

I’d considered hoof boots, but didn’t know where to start. I own a feed merchants and small tack shop, and so took to asking customers of their experiences, some were good, some bad, but one offered me the loan of her Old Mac G2’s size 9. I took these clumpy great big boots home, and tried to fit them, of course without reading the instructions first – my long suffering horse spent a lot of time on three legs whilst I fitted the gaiters first, then tried to push the boots over the top! Once I had the fitting sorted, we were away, they were fab! I was concerned that they would rub, but have never had a problem. Harley still had one shod foot at that time, so I rode a fair bit to trial the boots before telling my farrier that we were going barefoot – thereby saving myself about £40 every six weeks, the difference between shoeing and barefoot trimming.  Since having the boots, we haven’t looked back. We love hacking, generally for just an hour or so at a time, but last summer I booted up at about 8am, trailered my horse to the centre of Dartmoor, and completed the Dartmoor Challenge, about a four hour ride over stoney and boggy tracks, the boots were fantastic, and raised a lot of interest – small children often point and comment on my horse wearing wellies or trainers. An extra bonus which I hadn’t considered was how sure footed my horse is on slippery tarmac roads. Riding with a friend recently, she was having to dismount and lead her horse, his feet were slipping badly and he was in danger of going down on the road, but of course in boots my horse was absolutely fine.

My first pic shows Harleys broken knees, from slipping and falling down on the tarmac road about five years ago – luckily he made a complete recovery.

The second was taken on a hack after galloping through woodland, bare behind, one Old Mac G2 and one shod hoof, this was the transitional period when I decided to go to boots fulltime.

The final pic was taken on the Dartmoor challenge last summer, boots in front, bare behind.

Many thanks to Lucy Bruckner of Devon, England for sharing this story on Natural Hoof Care with us.