Home Success Stories EasyCare Cares
Share
Facebook
Twitter
Pinterest
Linkedin
Email
Phil and I met on February 16th when he called to order a Fit Kit. To say that we have had our ups and downs after that would be an understatement. We have gone through Gloves, Bares, Trails and every size and shape of comfort pad that is offered. And it has truly been an adventure. But Phil has stuck with us through everything and has been a real good sport.

Two weeks ago, I called Phil because I saw that he had placed another order for a Fit Kit on-line and I wanted to talk to him before shipping. I could tell immediately from his voice that something was wrong.

Here is Phil’s story. I have had Mercedes for five years now and she is twelve years old. I bought her from a broker in Kentucky and, at the time, I didn’t know why I bought her because she is too small for me to ride. I told myself that she was for my daughter, but she doesn’t ride. There was just something about her that won me over. After having her for five years, I now understand that Mercedes is a very bright, loving, calm and sophisticated horse. She is like an old soul. She gives me kisses, shakes her head “yes” for treats and she even smiles.

I was going on a ride with some friends about three years ago and they asked me to bring Mercedes because they had someone that could ride her so she would get some exercise. That someone turned out to be my second wife. I had been divorced for thirty years and, because of Mercedes, I am now happily married. Christy, my wife, and Mercedes, are a perfect match.

On the day of Mercedes’ injury, Christy was in the pasture with her and our two Arabians were running and playing in the pasture. Mercedes was going to the bottom of our pasture down a hill and coming back up again. 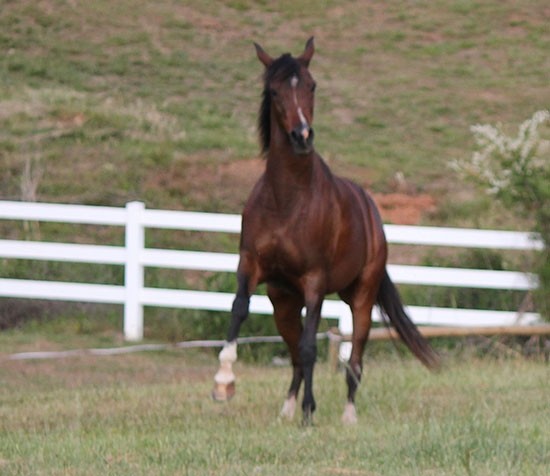 She did this numerous times, but the last time, she did not come back. Christy went to the crest of the hill and saw Mercedes standing there holding her leg up.

Christy called me at work, she called the vet and I hurried home, getting there before the vet. I knew right away that it was not good and the vet confirmed my fears. Mercedes did not move from the spot of the injury. The vet applied a splint and I brought the trailer to Mercedes. We didn’t know how we were going to get her into the trailer. I was in the trailer asking her gently to try. Suddenly, she jumped on three legs into the trailer. It was amazing.

We got her to UGA Vet Hospital and discovered that she had five major fractures of her knee and many smaller ones. The top of her cannon bone was splintered. The Vet said the only option beside putting her down was fusing the leg together with two 18″ titanium plates and she could never be ridden again, or bend her leg, or possibly ever run again. I chose the latter option and ask the surgeon if I was being selfish. He said he would let me know when I was being unreasonable.

During the 9 hour operation, the doctor stopped a couple hours in and told us that the damage was more severe than the X-rays had revealed. He would have to remove one row of carpal bones in her knee because they were crushed. Again, I was given the option of euthanizing her but, if she had a chance, I was going to give it to her.

The operation was a success, but the doctor said the hard part would be the eight weeks of wearing the cast and staying in the hospital. Laminitis and infection were also concerns. We found out last week after the cast was temporarily removed that there was some infection. One student broke down and cried. The whole staff has developed emotional ties with Mercedes.

Last week was the second week of antibiotics and either on Friday or Monday, they will go in again to have another look. The doctor said he was encouraged because her temperature has been normal and he hasn’t seen any seepage on the cast. She’s been in a great mood and eating and drinking normally. I believe that her heart and courage are larger than the whole hospital. It has been an emotional roller coaster for us because we love our horse, as you can imagine, and I will do everything in my power to save her life – unless she is suffering. A few people have told me if it is time to let go of her, she will let me know because the great ones always do.

When I asked Phil if I could do a blog about Mercedes, he said it would be nice to share Mercedes’ story.

Now that there is not a dry eye out there, let’s go to a more humerous side of Phil and Christy’s horses.

Max, the clown with the chair, is now in EasyCare protective hoof boots. And, remember at the beginning when I talked about the Fit Kit? Well, that’s for Leia.