July 3rd was an eventful day, the culmination of months of planning for many people, starting with my mate Barry – Lt.Col. (Ret.) – a retired Australian Armed Forces soldier with a background in horses.

His original brief was to organise a parade/escort for a VIP who would be presenting medals to deserving Reserve Armed Forces personnel or their dependents – about 120 in all.

The ceremony took place at The Shrine of Remembrance, Melbourne capital city of Victoria. The original VIP was the Governor General of Australia. When accepting the invitation she was asked if she would like anything in particular. She requested a horse escort. Her status required 40 horse and riders. Where to get 40 horses? We don’t have 40 horses in our Victorian Mounted Police Unit, or the Victorian unit of the Australian Lighthorse Brigade (ceremonial not active). We came up with the idea of having a cross-section of riders representing grass-roots level Australian riders. 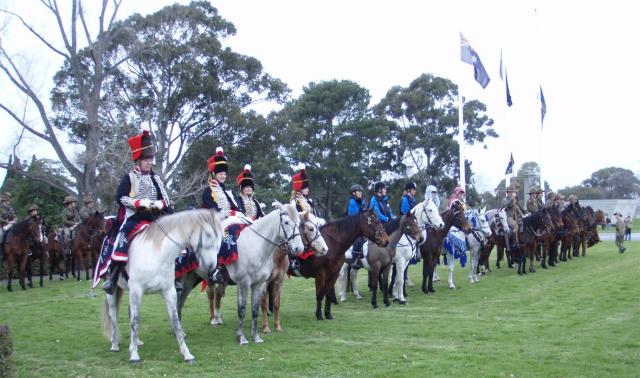 The idea evolved, influenced by circumstances and practicalities – a team of 15th Hussars, a team of endurance riders (I wasn’t going to miss out on the chance of riding along the major streets of of my state’s capital city!), 2 teams of polocross (not sure how they managed that, I think half of them were going to be Australian Stock Horse members but it didn’t happen), 2 pairs of Arabian costume riders (glamour?), plus a Light Horse team of over 20 horses that made us feel a bit superfluous on the day as they suited the overall theme much better. Unfortunately the GG had to pull out close to the day but her place was taken up by the newly appointed Governor of Victoria so the escort/parade remained relevant to the overall event.

So parade preparation… put the horses into all sorts of situations to firstly see how they react, and secondly make it all “old hat” to them. Ride in crowded areas, in new situations, over unfamiliar drains and road markings, worry whether a visit to the airport is in order to see what happens when planes fly overhead, wonder if there is a nearby brass-band or bagpipe player who would like an equine audience. Practice in formation – my mare Joby (ridden by Colette) didn’t like Linda’s black gelding Morgan. Tammy’s mare Reflection went in-season the morning of the actual event and decided she didn’t want to share Morgan with my Joby. And Joey, my friend’s white retired endurance horse who I got to ride, was the lovely dignified old gentleman who kept the peace by being a buffer between them all.

Ride, ride and more riding – a bit like trim, trim, trim and fit, fit, fit…practice makes perfect! On the day our practice showed up – we kept a tight formation, didn’t balk at bands, drains, reflective glass, planes, or music, and we looked discreetly smart in our practical jackets and polished horse gear.

Joby was wearing her trusted Glove boots – no worries of slipping on bitumen or tram tracks for her.  But how does one make used Easyboot Gloves look parade quality? Clean them well then apply a few light coats of black spray paint to achieve a brand new look instantly. I used the same method on EZ Ride Stirrups with cages with excellent results. 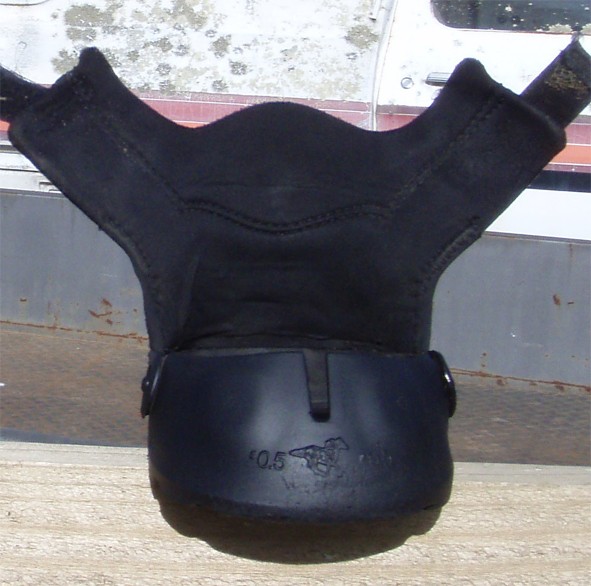 Joey got to christen some new Easyboot Trails. I’d been concerned about him because after years of shoeing his feet weren’t conditioned enough to go barefoot and stay comfortable for 3 hours of walking and standing on mainly hard surfaces. But there was no way I wanted him shod just for 3 hours either! And he wasn’t going to be a good fit for the Gloves I have either so Easyboot Trails seemed like the answer.

As usual, with impeccable service from all the people in both companies, EasyCare via EasyCare Downunder made it possible to get them in time, organising a super-quick delivery just for Joey. Easy fit, easy to apply, an excellent opportunity for a debut outing… when the Trails arrived in the mail I was a bit less enthusiastic. After being used to the Gloves for so long, the Trails looked clumpy and a bit “obvious”! I was even tempted to spray paint them all black as well, but decided on second look that they looked far smarter, and less like Old Macs, in 2-tone. 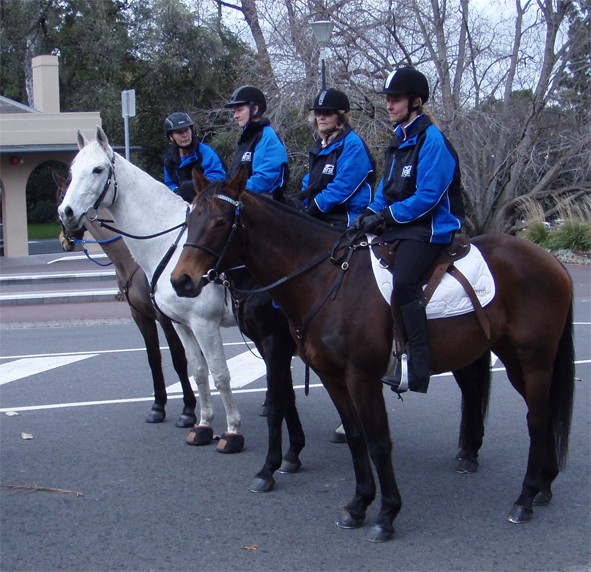 I tried them on Joey and they fitted well, but first impression was of an old bloke with really skinny legs wearing big shoes without socks! He was very happy in them though. I’d put some home-made pads in just to make him feel even more loved. A bit of walking – no problems. A gentle trot, and he felt like he went from strolling to zoom in zero flat! He definitely enjoyed the feeling of comfort when his Trails were put on.

Looking at the photos, he appears very alert but calm, and definitely comfortable in his footwear. And the boots look really good on him too – I’ve certainly got over any comparison issues between the 2 types of boots: as they say “it’s horses for courses” of course!

Out of the 40+ horses on parade, I think only Joey and Joby were unshod – but I was glad not to have any worries about slipping – after having ridden a shod horse that slipped on bitumen, I would have been stressing for a lot of the time otherwise.

It was certainly different to the usual endurance riding I do, but really fun. I took a lot of pride in the fact that we were participating in such a significant event, in front of such a large audience, for such deserving people. And I was also proud to know that the 2 horses I provided had maximum comfort and safety in their Easyboots. 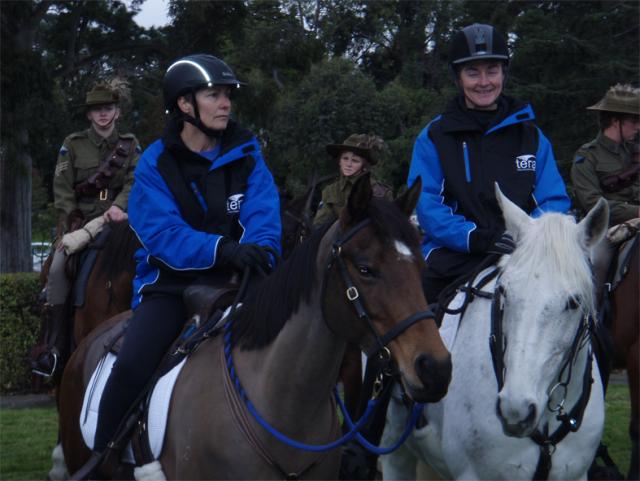