Easyboots = Freedom
After our successful attempt at gluing on Easyboot Gloves at our last ride, I was all set to do it again for the “real deal” at Buchan. And not just paint them orange, but do something even more fun/interesting/colourful. Unfortunately reality stepped in.

I was actually Ride Organiser along with two others for Buchan Tall Timber Endurance Ride so I was being fairly hopeful even thinking I’d get to “play” on the weekend as well as doing my share of work! In the end I simply ran out of time. Not only the boots didn’t get glued on, but I didn’t even have any back boots with new gaiters, just fronts. Because I don’t need to boot that often, Sundance is fairly sensitive to gaiters – the old ones did rub on occasion, but the new gaiters seem to do their job brilliantly. 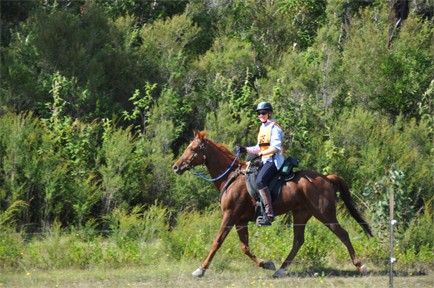 So we set off feeling with a pair of new Gloves on the fronts and bare on the back, a spare set of old style gaiter gloves in the stowaway just in case. The 40k loop that we completed was fantastic even if I do say so myself: really good going overall, lots of variety in terrain, track and scenery including some fairly steep hills and rocky roads. Sundance went so well in just front boots and no rubs at all, despite using gaitored Gloves for the first time in maybe 8 weeks.
I think that’s what I like best about the whole booting system – the freedom of choice to use, or not use, depending on what is required on the day. And that the boots can be a tool to get your horse performing to best of his ability, but they don’t have to be mandatory. Some of my best rides have been barefoot, but it’s because I’ve had the choice to use boots as needed on previous rides, to condition them to that level.
This ride – my little “dancing” horse just went out and enjoyed his day with me.

And I’d rate it as our best ride yet 🙂