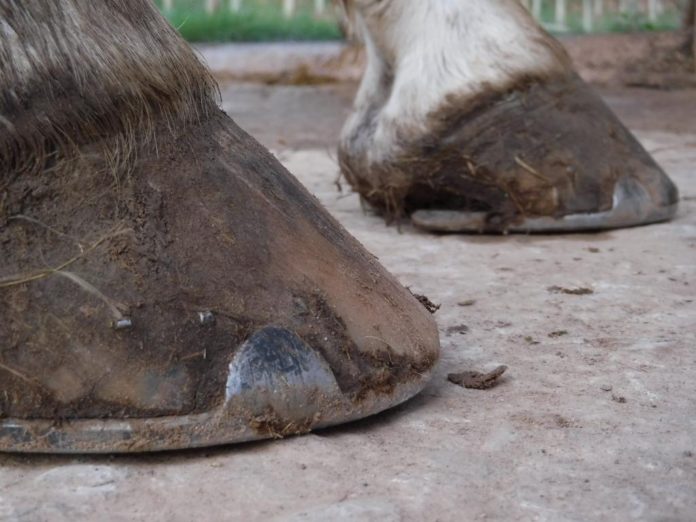 I want to make clear that my views and treatments here are my own and may not agree with that of many veterinarians and or other hoof care practitioners. I have, however, had good results and feel compelled to share the following story.

A long time client asked me to take a Quarter Horse mare named Sugar in for boarding and daily hoof care. She had been working in Alaska and the mare, back here in southeast Texas had not received proper care after being treated by a local vet for an abscess. In fact, the mare had been left in a soaker boot for eight consecutive days. Once I removed the boot, what most likely began as a small hole in the bottom of the hoof at the white line near the toe, had grown to an out of control infection over what turned out to be a very large part of the white line and a large portion of the sole.

When I got Sugar home I decided to resect all the infected tissue on the bottom of the hoof, realizing as I went that she would need constant protection from the environment and terrain. By the way, this is where most would say, don’t clean out all that sole as it leaves the hoof vulnerable to injury. I agree, and if you’re not willing to boot the horse in the manner described here, stick with daily soaking or medicating and wrapping the hoof. I just think it is more logical to remove all infected hoof when possible to improve the likelihood of timely success. 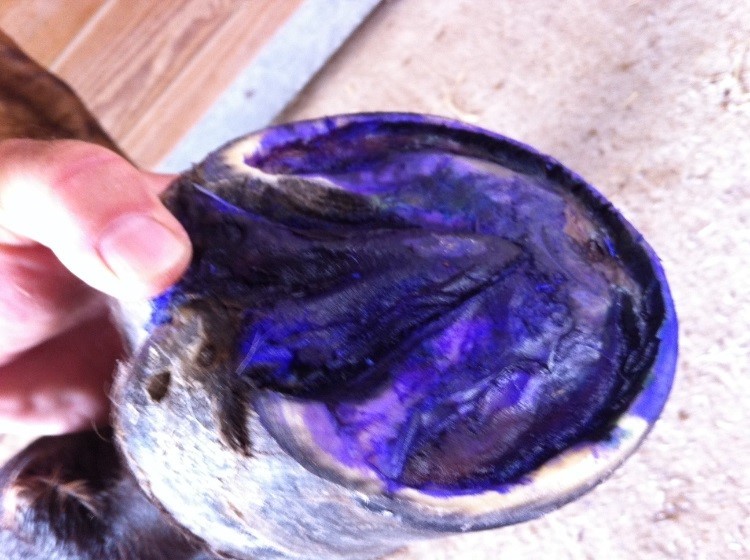 Sugar’s hoof, after the resection, treated with Durasole.

The infection had spread even farther than I had suspected, so she had to be kept booted until enough new sole had grown out to give her adequate comfort and protection.

I treated the resection with Durasole the first two days along with a product called No Thrush.  After a couple of days I continued with the No Thrush. This product is a powder with the consistency of flour, used for the natural treatment of thrush, usually in the frog. Once the resection is done, I want to make sure the hoof is clean and dry. I scrubbed the bottom of the hoof with anti-bacterial soap and water, then rinsed and dried. I prefer to dry with compressed air and a few more minutes on clean dry concrete. You could also use paper towels and a hairdryer.

Then, on this particular horse I opted for the Easyboot Glove, making sure to get a nice tight fit to keep debris out. I also added a 6mm comfort pad to keep the powder close to the sole and add additional comfort and support. I put a generous amount of powder inside the boot and on the sole of the hoof. I put the boot on and turned her out. At this point, all noticeable lameness was gone and the horse felt good. This is important for more than the obvious: it gets the horse moving, including riding in many cases, thus increasing blood flow through the hoof which speeds up the healing process.

I take the boot off every day and disinfect the hoof and the boot.  When everything is dry, I re-treat and reapply the boot. Before I discovered No Thrush, this was an everyday thing. Once I started to use the No Thrush, I found that as long as the horse was kept in a fairly dry pasture and it had not been raining, I could leave the boot on for as long as 48 hours and in some cases longer. The powder has two advantages: anti-thrush and moisture control. I touched up the trim every two weeks and after about four weeks, she no longer needed the boot. 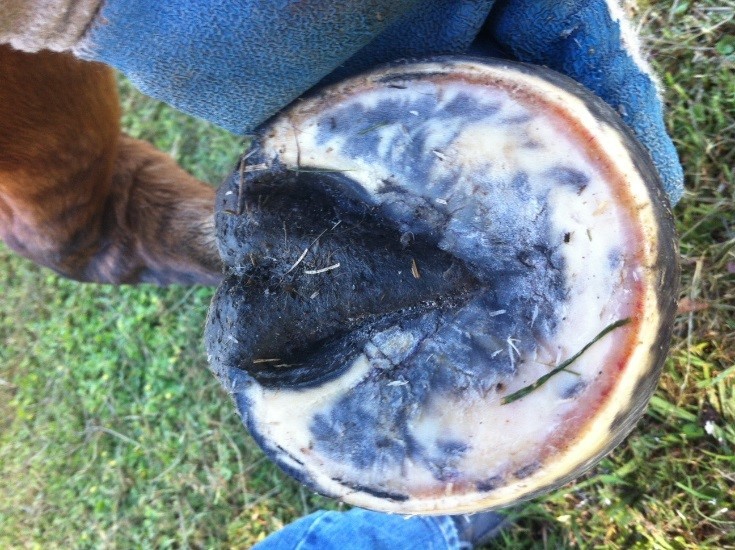 After 6 weeks, the hoof was practically back to normal and by 12 weeks there were no signs the infection ever existed.

At times I would take the boot off and find tiny amounts of thrush near the edge of the resection which I would remove and treat one day with Durasole and then continue with the powder.

Here are a few pointers if you want to try this. First, use two boots – that way you can alternate boots always having a clean boot ready when it’s time to remove and replace the boot. Be sure to clean the pad as well and dry each separately so you don’t trap any moisture under the pad. If the hoof is basically clean and dry, just clean with a wire brush, add more powder and put the other boot on and disinfect the one you just took off. This also comes in handy if you want to ride the horse during the treatment, because you have two front boots. I was lucky with Sugar: she didn’t mind the boot and never messed with it. Some horses may be less accommodating, so you may need to use some duct tape to protect the Velcro. Other boots like the Easyboot Rx and the Easyboot Transition work for this also.  I use a Dremel tool to do the last little bit of resections. It’s important to get all the infection out but not take more hoof than necessary.

I think that No Thrush and EasyCare make a great team, even for everyday booting. One final point, I have no relationship with the makers of any product named here, other than that of being a satisfied customer and an EasyCare dealer.