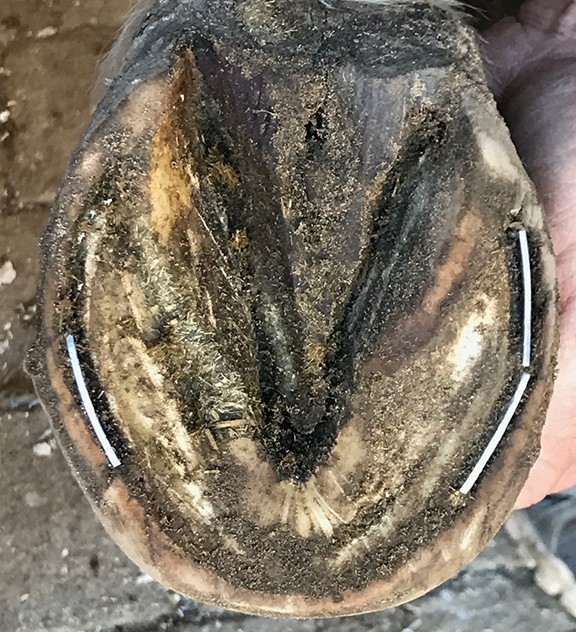 By Rachel Braverman of Polyflex Horseshoes

Shod, glued, booted or barefoot it’s no wonder that our horses end up with some form of compromised hooves when we consider the elements they’re exposed to. Climate extremes, bacteria, abrasive surfaces and athletic demands all influence the health of our horses’ feet – and for many of us the frustration of addressing hoof wall separations, excessive wear and the challenges that stem from them can seem never ending. Just as one problem seems to disappear – another arrives unannounced.

The good news? The answer may be as simple as tapping your feet.

Named after its inventor and longtime farrier Doug Ehrmann, DE Hoof Taps are a product that offers an entirely new approach to hoof care. 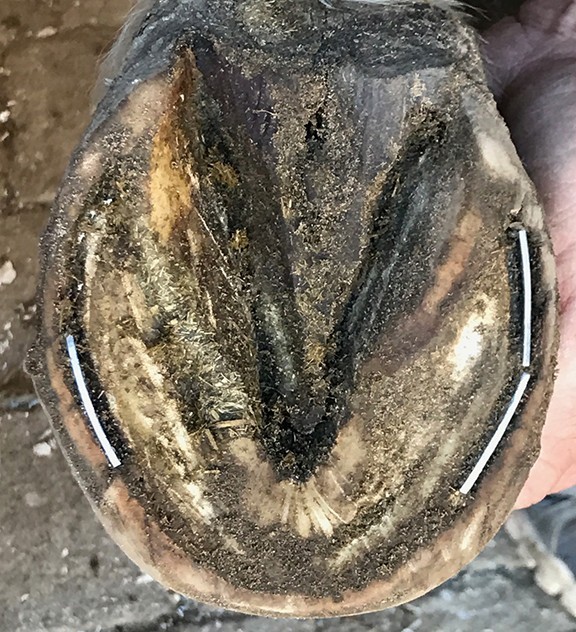 DE Hoof Taps were inserted to assist this horse with wall separations.

Created because of his need for a real solution, Doug explains “Up where I shoe, inclement weather and abrasive surfaces like stone dust arenas are commonplace. So many horses were having chronic issues with excessive wear, wall separations and overall loss of hoof integrity. I remember thinking to myself – I have to find a better way to help.”

So after years of research, field trials and evolutionary stages Ehrmann formally introduced DE Hoof Taps to the market in 2018 and since then has produced noticeable and exciting results for the future of farriery.

A zinc coated steel tap measuring approximately 1.25 inches in length, DE Hoof Taps are inserted into the foot just outside of the white line. Left in for the duration of the shoeing cycle, DE Hoof Taps are most commonly used under traditional shoes. However, great success has also been seen utilizing the taps under glue on synthetics, in booted horses and the barefoot horse. “I designed them to be versatile,” Ehrmann clarifies, “horses of all disciplines and shoeing methods can at some point face the challenges these taps are meant to combat. That’s why it was so important for me to create a product that could be used as an accessory for any horse.” 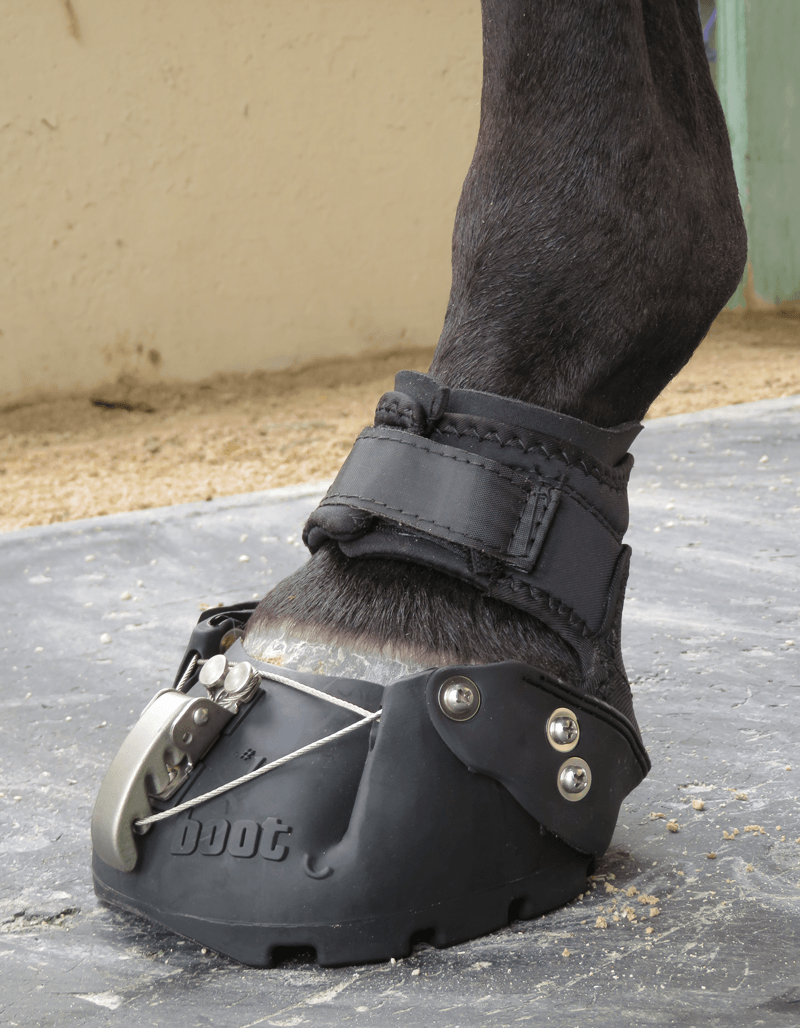 DE Hoof Taps can be a great option for booted or barefoot horses suffering from brittle hooves and wall separations. This horse is shown prepped to ride in an Easyboot Epic.

This versatility is just one feature that’s made DE Hoof Taps a popular choice among industry professionals. Farriers are reporting significantly tighter white lines, healed wall separations and a marked decrease in excessive wear. Simply visit the DE Hoof Taps Facebook page and a plethora of before and after case studies illuminates the screen. While Doug is no newcomer to product innovation, his ultimate standard remains the same. “If I’m going to bring an idea of mine to fruition – it needs to be a product that I reach for and that I use on a daily basis without having to think about because it works. The DE Hoof Tap has become exactly that product for me.” Based on growing product demands, it’s obvious these taps are quickly becoming a go to product for farriers across the U.S.

While the positive feedback and documentation has been consistent – the inevitable question comes up.

The answer, is that the answer is still evolving. What we do know for certain is that the zinc coating plays a major role. On a chemical level, zinc is said to attract existing bacteria and repel new bacteria. Ehrmann’s hypothesis is that if the tap is inserted into a compromised foot, then the zinc coating will draw the bacteria towards itself. In turn, it’s believed that the zinc aids in rerouting the bacteria from traveling up the tubules of the hoof wall. As a bonus the steel makeup of the tap aids in reduction of wear on the hoof.

“We’re continually discovering more about how they work,” Ehrmann admits, “but the exciting part is that we’ve seen over and over again the positive impact they make on horses feet. They produce results too good to ignore.”

Mechanically speaking, Ehrmann designed the taps to mimic the natural curvature of the white line and to remain within the foot at a shallow depth. While the taps are not intended to be shaped, they can be easily modified to match the needs of the foot.

Some examples include shortening the taps to be placed in smaller, more specific locations, inserting the taps at the toe and in the heels. “In some cases you may only choose to use part of a tap, while in others you may decide to use multiple. The decision is ultimately up to the discretion and knowledge of the farrier using them,” Ehrmann explains. He continues “The more skilled you are as a farrier the more you’ll be able to utilize the potential of these taps to their full extent.”

To remove, easily pull or trim the taps out at the end of the horses shoeing cycle. The uncomplicated process just makes taps that much more appealing. However, it’s important to understand that the DE Hoof Tap is not a DIY product.

While the simplicity of the DE Hoof Tap makes it a natural addition to any farrier’s shoeing box, Ehrmann cautions that taps should only be inserted by a hoof care professional. “This product is simple to use, and that’s one of the best parts about it – but it still needs to be respected as a tool. If you think your horse could be a good candidate, have the discussion with your farrier. He or she will be able to place the tap where and how it will benefit your horse the most.”

Designed with the good of the horse in mind, it’s exciting to consider what the future holds for the DE Hoof Tap. Many believe this product could be the representative product of a new generation of hoof care technology to come. It certainly defines out of the box thinking – and offers a new platform from which to approach hoof care. Not to mention it offers a creative addition to any farrier’s toolbox.

But if there is one thing we can count on, it’s for Doug Ehrmann to keep innovating.  So long as there is a horse in need, whether shod, glued, booted or barefoot they will now have the opportunity to tap their feet.

Somewhere Between a Boot & a Shoe