Three months ago, when my Arabian filly, Selket Andreesa, was almost 11 months, she became slightly lame on her left hind foot. I suspected an abscess and hoped that it would resolve in a few days. It didn’t. It got steadily worse and very painful and did not respond to soaking. I located the seat of the abscess and tried to relieve the pressure but the abscess had already started to drain at the coronet band. The pain did not abate. The leg started to swell and the vet put the filly on one course of antibiotics. It also needed a second course. The swelling slowly reduced but the filly continued to walk on 3 legs for almost a month. 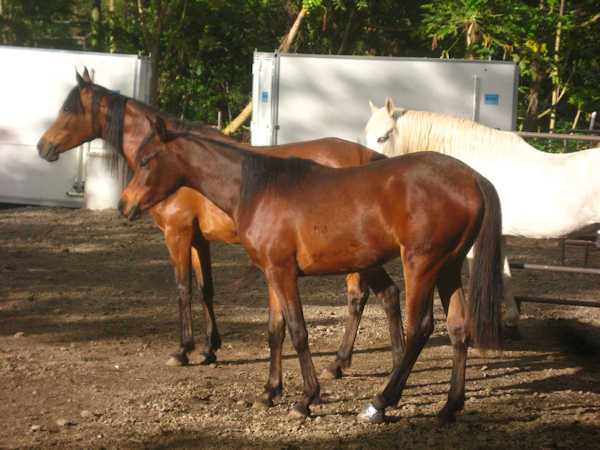 I began to have serious fears about my filly’s future. When she began to use the left hind foot again, she bore weight only on the very tip of the toe. The coronet band was inflamed all around the foot and badly swollen. I tried various foot wraps and small medicine boots but she destroyed each of them within a few days. Baby diapers and gorilla duct tape helped to protect the foot but would quickly wear through.

I counted it as a major success when Andreesa began to put a little weight on the heel. I noticed that the swollen area around the coronet had begun to grow down and that the coronet and the new hoof growth above the swelling looked healthy. Each day, I would unwrap the foot, check it, apply medicine and rewrap again. It was unnerving to look at the bottom of the foot. There was a spooky 1-1/4” deep cavern on the medial side where the sole should have been. The medial wall was just out there with little connected to it, but holding, so I left it there.

Then one day, a big chunk of sole fell off the center of the foot and blood poured out. There was black crud in the hole but I didn’t dare poke around in there . I squirted iodine into it every day. I realized that I desperately needed to get some kind of serious boot solution for the long-term protection of the foot while the healing took place. At that point, we were also experiencing tropical downpours so I needed a way to keep the hoof as dry and clean as possible. We have a large open barn for the horses but the vet also wanted Andreesa to be able to get as much exercise as she could tolerate.

At that point, I measured Andreesa’s foot and she was just getting to the size range where she would fit into some of the smallest sizes of the Easycare boots. At first I tried her in the Rx. It worked very well but the Rx is for light turnout and my filly doesn’t seem to do light turn out. She demolished the first boot in two weeks and had trashed the replacement in a week. 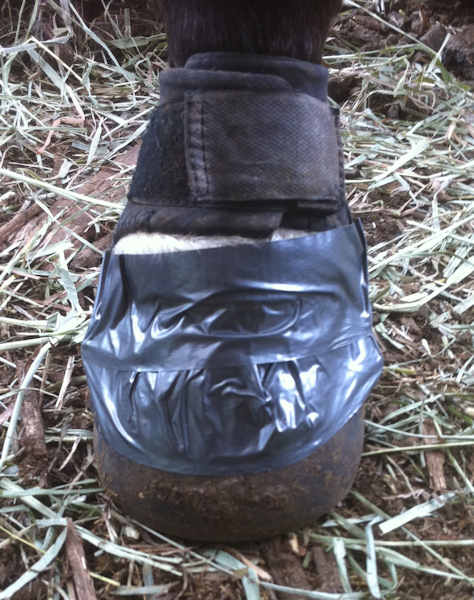 I was reevaluating my alternatives when I decided to try her in the size 0.5 Easyboot Glove boots that I use for my small Arab mare. To make the foot snug in the Glove, I taped three layers of Gorilla duct tape across the front of the bare foot. Then I put the Glove on the foot and applied the gaiter snugly. I found that it does not matter that the fit on the foot is not perfect because I used external wraps of duct tape around the boot and around the foot and the lower part of the gaiter. I made sure that the part of the gaiter around the fetlock was free to move as the horse flexes the fetlock. With this method, my filly gallops, make sharp turns, bucks, rears, kicks up her heels and does sliding stops without the Easyboot Glove ever coming off. For a while, I used a comfort pad in the boot but

Andreesa seems to be completely comfortable without it, so I discontinued the pad.

Currently, each day I quickly cut the external Gorilla tape with scissors and remove the boot. I clean the boot, medicate the bottom of the hoof, retape the hoof, re-apply the boot to the hoof and retape the exterior. 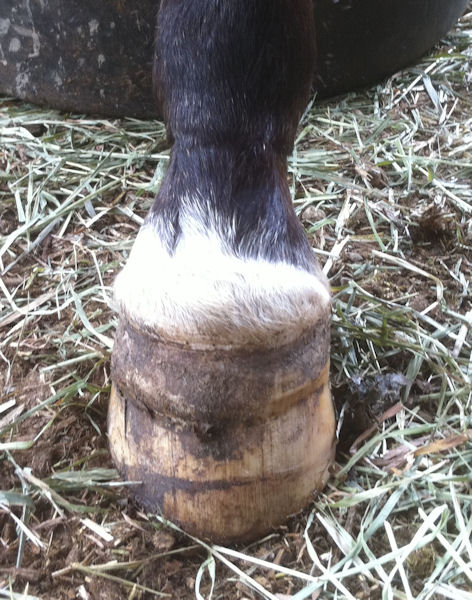 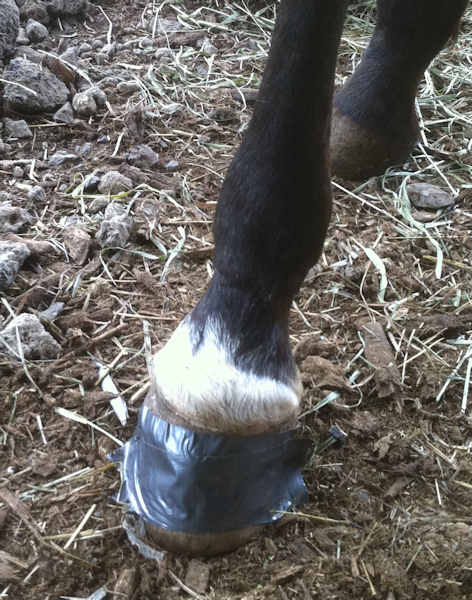 The Easyboot Glove solution has taken the worry out of caring for and protecting Andreesa’s injured foot while it heals. The routine to remove the boot, clean the boot and foot, medicate, and reapply the boot now takes only 3-5 minutes a day.

Thank you Elizabeth for sharing your story with us and your video that shows Andreesa and mom having a ball romping with Andreesa’s Easyboot Glove staying in place on her hind hoof.

What success have you had with using an EasyCare boot to nurse your horse back from a hoof issue?