Peter is a small pony I was given by the local slaughter man when he was a foal at foot. He is out of a riding pony mare by a minature stallion – absolutely shouldn’t have been bred, but there he was. For the last few years he has been with a friend, babysitting her big horse. He is now 5 years old, 10:2 hh and came home this summer to be backed for friend’s small sons to ride. 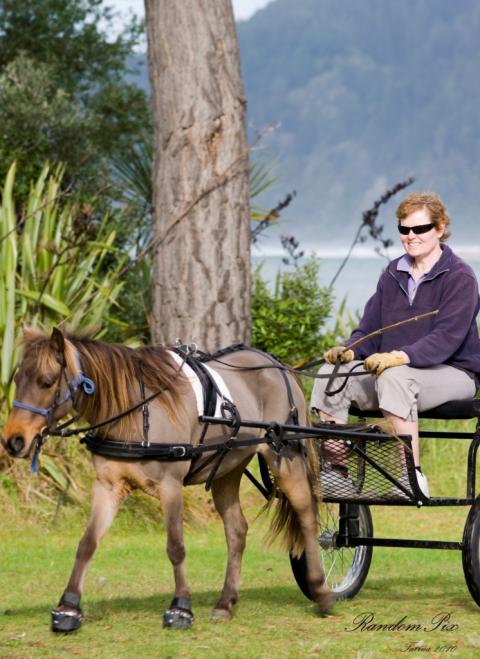 He has had a number of bouts of laminitis, treated by vet and farrier. When he came home he was over weight and walking with difficulty. His heels were long and toes short. I trimmed him and he immediately moved more freely. Loosing weight helped a lot too! The real problem was: how to train and work a small pony with no children regularly available? I know! I’ll start him in harness as well as under saddle. I had harness and got hold of a training cart.

All went well, he proved to be ideal for driving, but he found it hard going on rocky tracks and wore his feet out when working on the road. I discussed options with my farrier and he suggested I try boots – then when I was working on grass I could leave them off and they would also protect his soles when working on stoney tracks which shoes wouldn’t do. So I ordered a pair of Easyboot Bare – mainly because they came small enough.

They’re great – quick to put on, easy to keep clean. Now I want a set of gloves for his hind feet – we are doing so much work he is quickly wearing them down. Trouble is, gloves don’t come small enough! Picture is of us recently at a beach town near here – still using the training cart. Peter was happy to trot all around town, coped with children running up to pet him, balls thrown and kicked at him, dogs barking at him and crossing little foot bridges that were only just wide enough for the cart!