Last October (2009,) a friend and I rode trail 11 from Twin Buttes TH to Horseshoe Dam. We camped about a mile or two down the road from the official TH. This was as close as you could drive in with a trailer. The next morning, Diane Wertz, Billy (her mule), Soldier (my mule) and Monty (my foxtrotter and reluctant packhorse) started down the trail. Everyone was barefoot, except the people of course.

Billy and Soldier did not need to wear their Epics but we had them with us. Monty started out with boots all the way around. Bares in the back and modified Epics in the front. Modied? I have some older version, red, size two easy boots. These are the only boots you can buy the size two gaiter and put them on. None of the other sizes work. However, the screws only match up with the back two holes — the front does not, so I duck tape the end down. 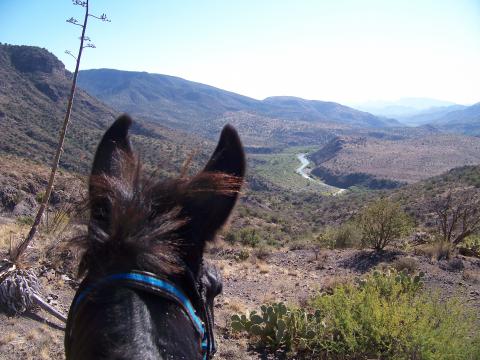 The first day the trail is relatively easy to find, but is not beat out and obvious to follow. We found a nice sandy area to camp for the night. The second we probably spent about, no kidding, three hours hunting trail. The rock cairns were either nonexistant, or buried or far and few between! We had our maps and both of us can read topos so we bumbled our way along. During this time we came up with the plan of sending the person, who was not ponying the packhorse, ahead to look for the trail when it disappeard. That way the pack horse would not have cover the same area too many times. He was working harder than the other two.

We did our first river crossing this day and since the river was down it was no problem. We camped the second night at Red Creek and slept next to the river. The last morning we got an early start just in case we had as much trouble finding trail and we did the previous day. Fortunately, the only trouble was right at the start. We could NOT find the first part of the trail, so we wandered about, checked our maps, checked the gps and finally ran into the most beautiful rock cairn in the world! Well, not really, but we were happy to find it! Once we hit the trail it was like a freeway all the way to Sheep Bridge. Once we got to Sheep Bridge, we unfortunately had about 20 miles of road to ride to get to our trailer. That was the only bad part of the ride! The boots held up and my horses was happy!