My 5 year old Arab/QH had to have a section of his P3 removed this summer becasue of an infection. The vet mentioned putting on a hospital plate but the foot looked so sore I couldn’t bear the thought and he had never worn a shoe. 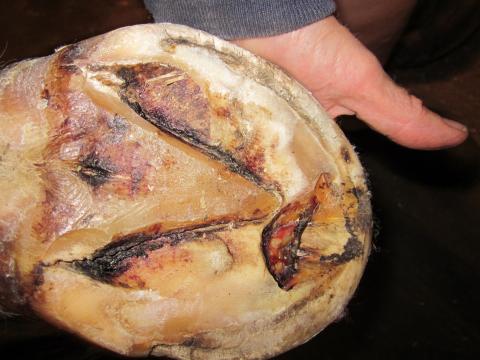 The hole in his hoof that several different EasyCare boots have been protecting. This was 3 weeks & 5 days postop.

I put an Easy Care Epic over the bandage every day after I changed it which kept the foot clean and dry and allowed him to walk around in the indoor and soon after out in a paddock. After about 10 days we changed to the orginal Old Mac and the heal started to look better. I wanted to start riding him walk trot and the Old Mac was a little lose so I switched to an Old Mac G2 which was a great fit over the bandage.

The other day his bandage was due for a change and had started to unrvavel so I took it off and used just an Easyboot Glove. Was he ever happy: felt like freedom to him. He will have follow up x-rays soon but the pictures I emailed the vet looked good to him. All the different boots have allowed me to protect his hoof and give him the freedom to move. The next boot to try will be the Rx when it comes this week.

Thanks EasyCare: I don’t know how I would have dealt with this hoof and a young horse without all your different kinds of boots.