Kestrel is a 9 year old pure bred Connemara bought as a 4 year old having only ever competed in dressage competitions. He didn’t know how to gallop, was extremely spooky (still is!), had never hacked on the roads, hunted, been to the beach – boy was he going to be challenge! 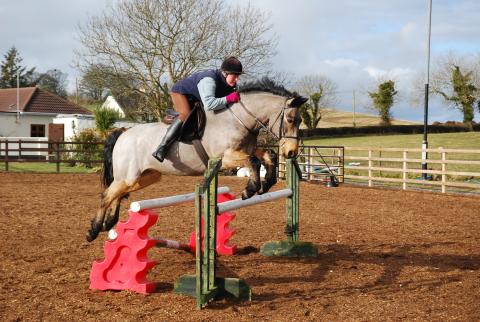 I didn’t know then just how much of a challenge he would be when he went lame after completing a second 40 mile ride (to attain Silver Shamrock with the Irish Long Distance Riding Associtation at the age of 7). He was laid off work for 6 months (without shoes), had two sets of x-rays taken which showed up absolutely nothing and generally improved once the shoes were off.

This led me to barefoot websites and some research and my first boots were secondhand Old Macs Originals from ebay. When his feet grew and changed shape I bought a new pair of Old Macs G2s from a supplier in England (we’re a bit backward here in Ireland and I have only today for the first time seen an advert for hoof boot fitting – in the south of Ireland – about 150 miles from where I live). These worked well and I now have a barefoot trimmer who comes on a regular basis to trim Kes’s feet.

We’ve progressed to Easyboot Epics which I put onto Kes for a ride on Sunday past which gave them a really good try out as we took part in a pleasure ride around Clandeboye Estate in Bangor, County Down where we were knee deep in sticky mud. I was amazed my boots stayed on despite having looked up the Easyboot site on numerous occasions and read everyone else’s reports. Our other horses are also barefoot including a 14 year old TB mare who hacks regularly and we use the Old Macs on her (the boots fit both horses which is very handy) and will never have shoes on them. Their feet are all amazing -despite the fact that as we live in Ireland and the ground is frequently very wet.

It’s not called the Emerald Isle for nothing you know! I would recommend barefoot and Easyboots to anyone – just send them my email address and I’ll convince them!