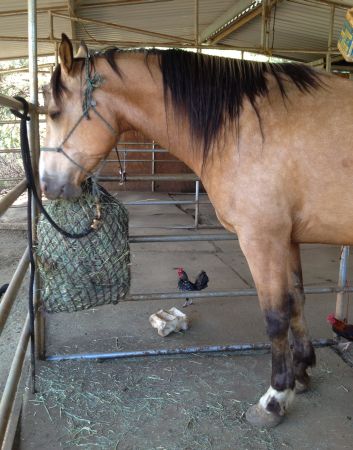 Fergus didn’t get his glue-ons removed until the Saturday following NASTR 75 – 8 days later – due to lack of energy on my part. As soon as the shells come off is the perfect time to do a really attentive trim because the foot is still moist, allowing you to remove any retained sole and get to the bottom of any other rock-like areas of the foot.

First you assemble the horse, a hay bag, and a few chickens as helpers:

Then you assemble the necessary tools – gloves, a rubber mallet, a couple of tyre removers, and a pointy hoof pick. 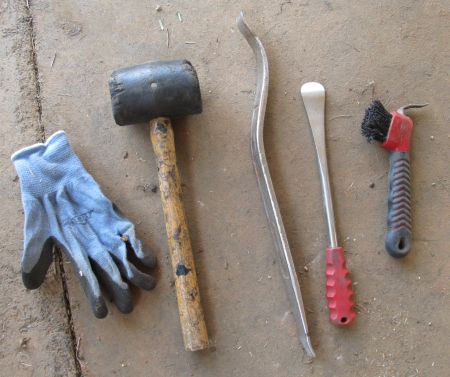 A word about rubber mallets. I recently used a friend’s mallet to encourage some snug boots to go on the foot. Her mallet was huge and heavy and I could barely swing it, making it a tough tool to use. My mallet, on the other hand, is a wussy mallet – it’s hefty enough to do the job, but not at the expense of yanking all the muscles in my arm in the process. So if you find yourself wishing you didn’t have to wield that heavy thing, consider shopping for a less-overwhelming mallet.
The hoof pick is necessary to start on the edge. The back part of the boot is usually separated from the hoof wall, so poke the hoof pick in there to make a big enough space to weedle your tyre remover in: 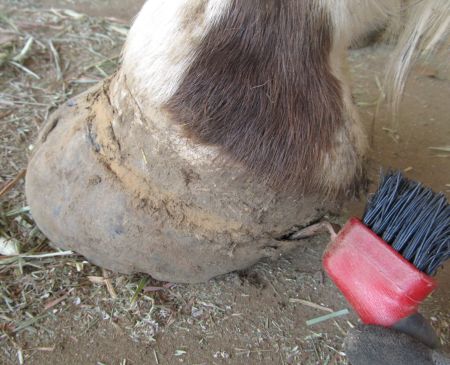 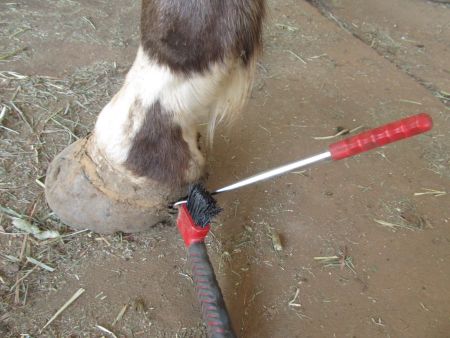 Once you’ve wiggled the end of the tyre remover in, you can start working your way around towards the toe using gentle whacks of the mallet. I really like using the tyre remover rather than a wide-bladed screwdriver because it curves towards the outside with a blunt tip – so when you tap it with the mallet, you don’t run the risk of inadvertently gouging into the side of the hoof wall, causing the horse to start in pain and knee you in the corner of the eye. Ask me how I know this.
So tap your way around to the front, before going around the other side and working your way back to front on the inside. This is where the hay bag helps – the horse doesn’t care what you’re doing, grovelling around under his feet. 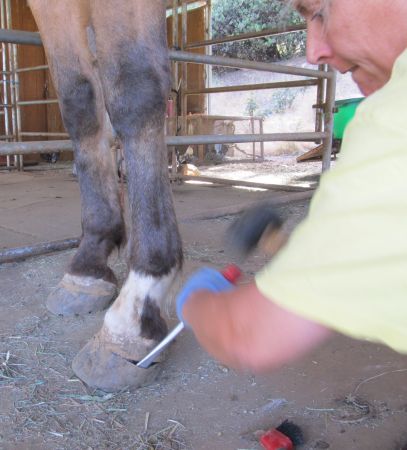 Fergus’ newly revealed foot – complete with its casing of Adhere.
You can either rasp off this left-over Adhere, or you can leave it alone – depending on how obsessive you’re feeling and how much time you have. In Fergus’ case, I rasped off the excess glue – being careful to only take off glue, not hoof-wall.
NASTR 75 is a particularly rocky ride and because Fergus can be sensitive, I wanted as good sole protection as possible. In this case, we’d smeared Goober Glue (now Sikaflex) liberally all over the bottom of his foot before applying the boot – and it worked beautifully. Instead of just protecting the frog area as sometimes happens, I was able to get the whole sole covered in a rubbery cushion. 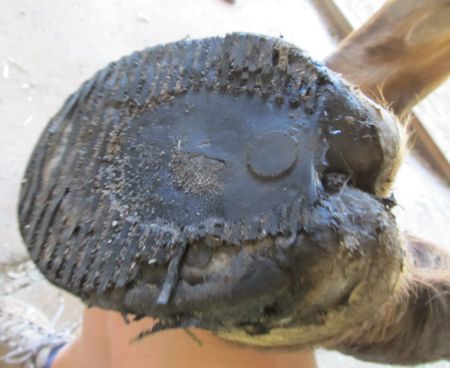 He’d picked up a little bit of sand from the multiple creek crossings, but nothing too bad. 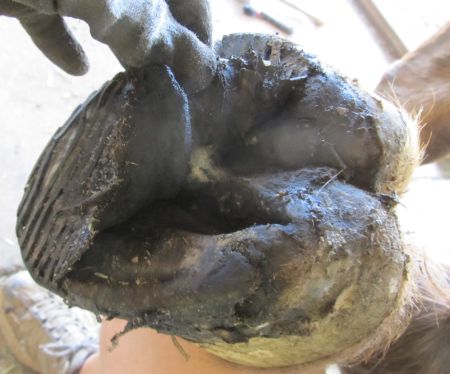 And as predicted, his foot was nice and moist (read ‘stinky’), so instead of fighting against rock-hard foot material, I was really able to get rid of junk sole and clean everything up to set him up nicely for the coming dry months.
Since he’s on break for a couple of weeks and after that will be on light riding for another couple of weeks, I removed the remaining damaged slice of hoof in the heel that was trapping gunk and not doing much by way of support. This should grow out properly now and by the time he’s ready to hit the trails aggressively again in early July, he should be looking good. 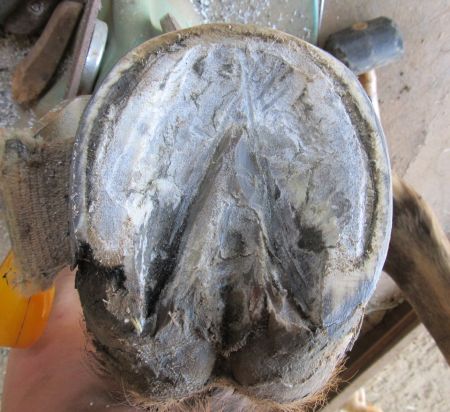