It’s a sad week in the competitive trail riding community as we hear news of Elmer Bandit’s passing. The 38 year old half-Arabian gelding that has been an inspiration to many was euthanized at his home in Missouri Sunday evening, Feb 14th. He would have been 39 in two months.

Owner Mary Anna Wood was called to Elmer’s pasture early Sunday morning after the gelding failed to rise for his breakfast. Cold weather may have contributed to hypothermia, and 12 hours were spent trying to help him get up. Wood decided it was his time to go after he stopped trying to stand in the last hour.

A necropsy was performed at Kansas State University, and revealed the gelding’s body was in surprisingly good shape, displayed few signs of his advanced age, and had very little evidence of arthritis.

Elmer Bandit recorded an amazing 20,780 lifetime trail miles with Wood. He was the first horse inducted into the North American Trail Ride Conference Hall of Fame, and completed two competitive trail rides in the 2009 season. Most horses are considered seniors by the time they reach 18, and yet Elmer continued to be a competitive horse 20 years longer than the age at which many horses are retired. Elmer remained healthy and active until the end, and was last ridden on February 6th. 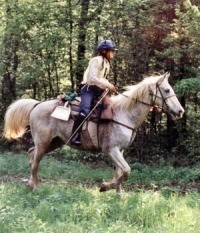 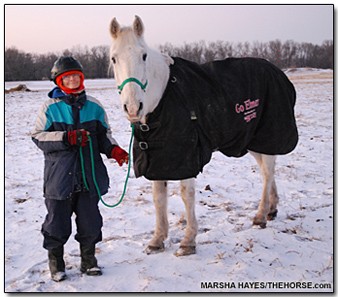 Our condolences to Mary Anna Wood…. what a special equine partner Elmer was. He will be remembered always.
Posted by Nancy Fredrick