Well it’s Wednesday night now, just four nights after finishing the 100 mile endurance ride at Bandit Springs. I have so much to say, yet for some bizarre reason, I can’t quite put it into words. Excuse my rambling.

Ever since the first time I rode at Bandit Springs, it has stayed with me as one of the most beautiful endurance rides in the Pacific Northwest. I remember watching the 100 mile riders come in and out of camp all day and always thinking how lucky there were to be able to enjoy SO MUCH of the Bandit trails! Well, I’ll tell ya now, doing a 100 is the freaking gift that keeps on giving. At about 90 miles, you wish the gift would just get on with itself already and leave you to go to sleep on the side of the trail. But then you realize that something scary like an aggressive wild stallion (true story- a wild stallion stalked the trail and even attacked a group of riders on the 50) might come and eat you, or, worse, might breed your mare and stick you with some God-awful specimen of an equine that you would be destined to stare at in your pasture forever. So you suck it up and keep on going. 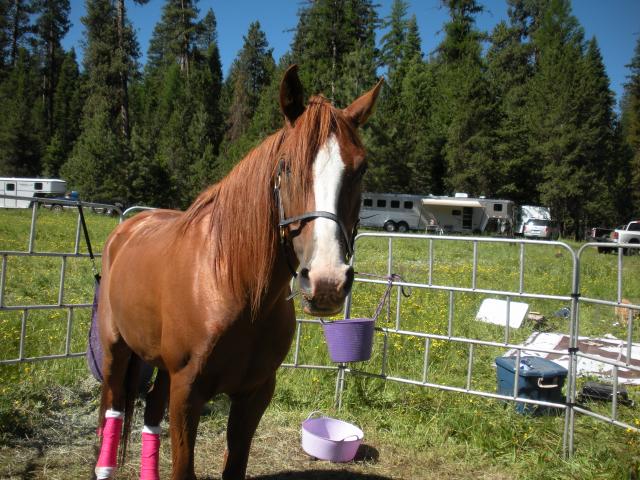 Replika last year, the morning after the 80 mile ride.

I learned a few things on this 100 mile ride. I learned that Snickers bars with almonds can be an absolute lifesaver on a long loop. I learned that sending Luna and Cliff bars and yogurt as your only source of food to the out-check at 50 miles just won’t cut it. I learned that your tights can leave marks on your legs that last for at least four days after the ride. I also learned that after you trot trot trot all day, you fall asleep trot trot trotting after it’s all said and done. Another thing I learned is that my horse can eat more before, during and after the ride that I ever thought would be possible. I learned that even though my mare was reluctant leaving the last loop, she sucked it up and lead us safely through the black forest, stopping only briefly to grab bites of the lush Bandit grass along the way and brought us strongly back to camp. And another thing that I didn’t exactly learn, because I already really knew, is that Easyboot Glue-Ons have GOT to be the best option for the horse on these long rides. 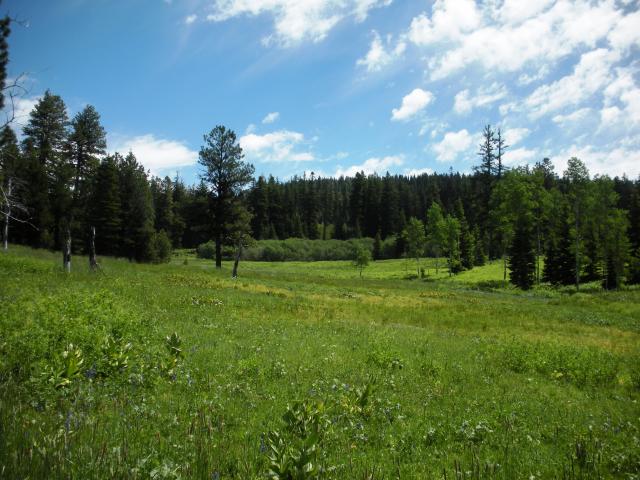 The journey to this ride started last year really. I had planned on Tevis this year. The Tevis in July, not October. I rode every ride last year, including the 80 at Bandit, with the intention of doing Tevis this year. As it would happen, Tevis was postponed and Bandit stood quietly in the corner. It wasn’t actually quiet at all. Ride manager, Janelle Wilde, is NEVER known as quiet. She had been hounding us for months about coming to Bandit, as my husband has been a vet at this ride for the last several years. Janelle pretended to be sad for me when I told her that Tevis was moved, but I could hear her jumping up and down the background. She really likes Robert.

I was torn between doing the 80 like I did last year (and had an absolute blast doing), or putting on the big girl panties and doing the 100. I made plans with a good friend to use her Big Horn horse from last year and ride with me on the 100, but it wasn’t meant to be and I was left waffling about which distance to do. I got her out the night before we left and just knew. She not only looked amazing, but was sassy as can be. We were going to do the 100, whether we were the only ones riding or not. I glued on her boots, using my regular combination of Goober Glue on the sole and 3/4 of the wall of the boot, and a strip of Vettec Adhere at the top of the boot to secure it on the foot while the GG sets. Despite a little twisting of the right front, the boots went on without a hitch and we were ready to go. 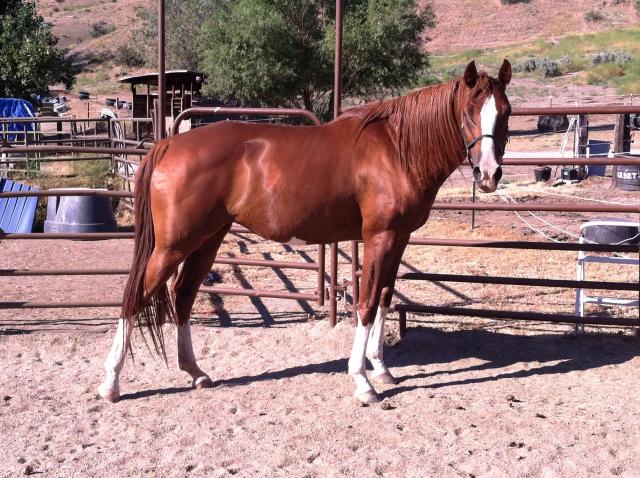 Sassy mare, the night before we left. 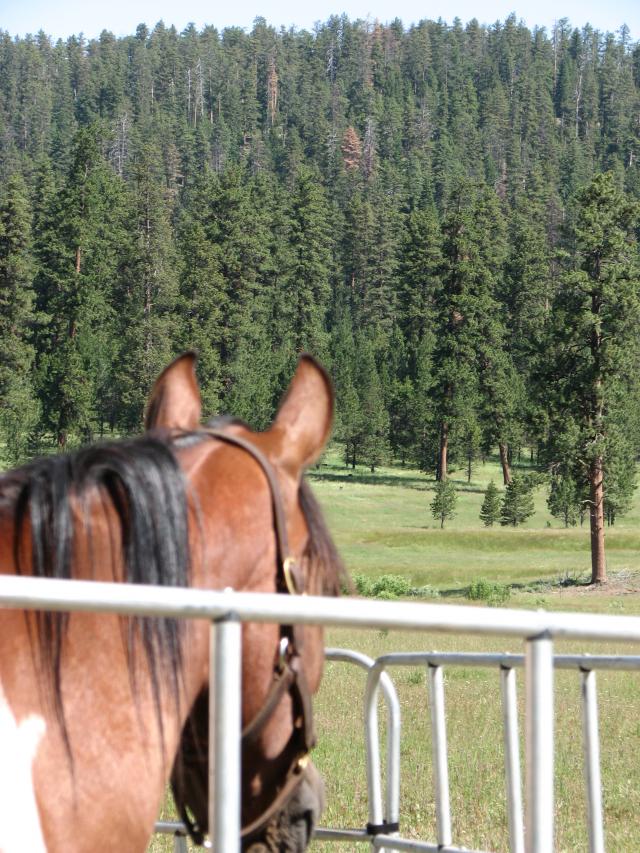 My old horse, Fast Eddy, gazing at the view from his pen. Can it get much better?

We made the 7hr drive to ridecamp without any issues, and Replika set in to eating. And eating. And eating. In fact, I think the only time she wasn’t eating was when I was riding, and even then she was eating. She must have known what was coming. The day before the ride, an Idaho friend asked if I wanted to ride with her and we were set. In hindsight, I feel pretty bad for my friend. She has got to be one the most laid-back, go-with-the-flow girl you’ve ever met. Well, have you met me? I think I surprised her first thing when I declared my plan to finish at midnight. I have done most of the loops before, so I knew about how fast each should take, and calculating in the hold times, I thought midnight was doable. Poor thing didn’t know what she was getting into. 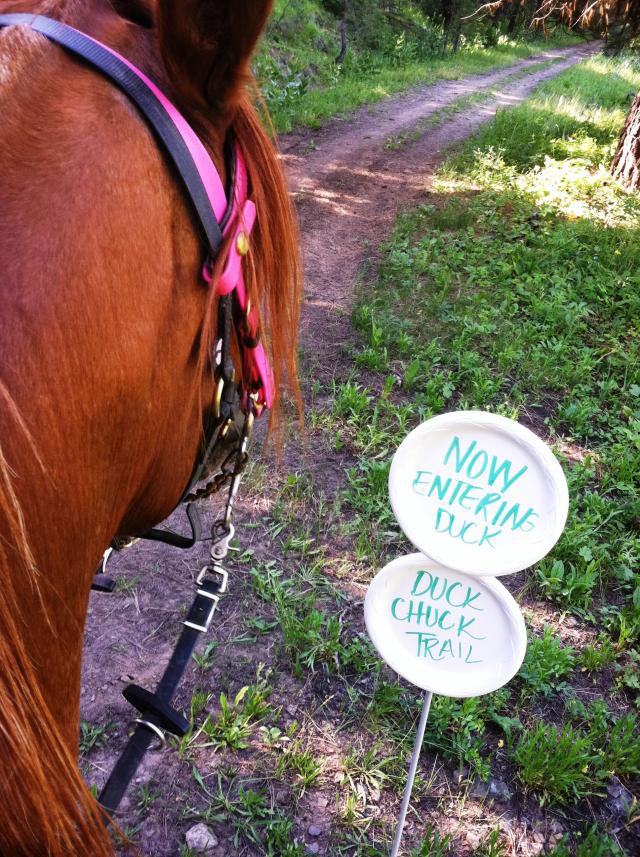 Ride Management ALWAYS has a sense of humor at this ride! Hope Chuck didn’t get wiped out!! PS Chuck uses Easyboots so he’s an alright kinda guy. 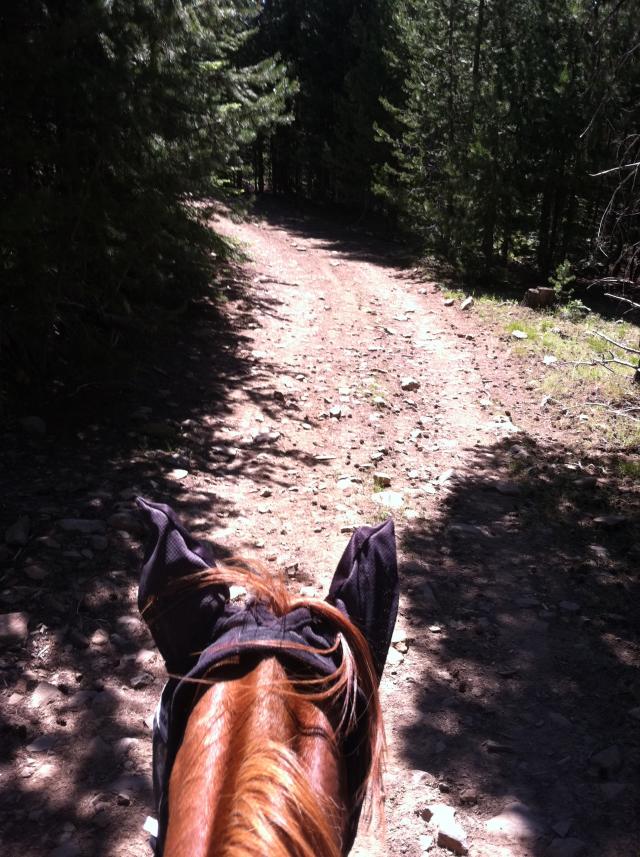 A little bit of rock…Is negated by all of this- 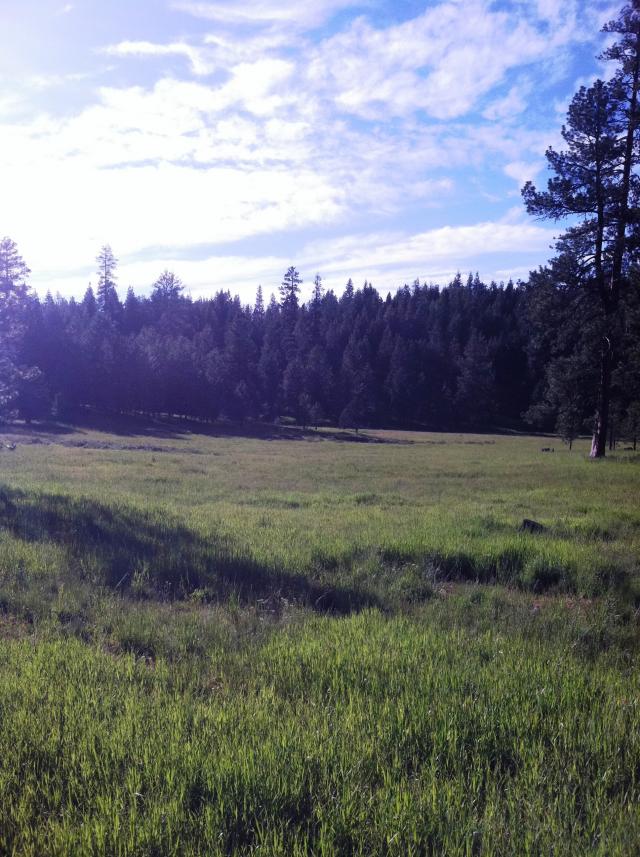 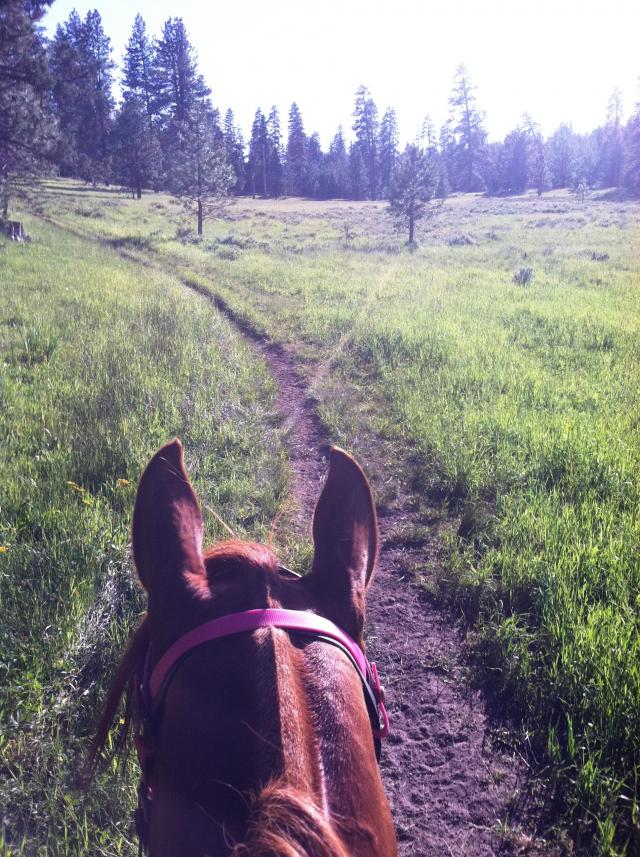 But the best view I saw, were the perky red ears that looked like this all day long.

We kept a steady pace all day, and thankfully for the boots, the rocks didn’t slow us down at all. My friend’s horse was shod and I am always thankful when there are no boot failures when riding with people that shoe! As her husband is a farrier, I was extra thankful! I really appreciated the protection and cushion of the boots/Goober Glue combo as there are a lot of rocky sections on this ride, and a little bit of downhill hard-pack road. Although most of the trail is lovely single track, I am always thankful for the protection when doing much downhill trotting.

I feel a little disappointed in myself that I was so focused on getting from vetcheck to vetcheck that I didn’t spend as much time as normal taking in the views and just enjoying the trail. It seems hard to do both, and I wish I would have relaxed a bit an enjoyed it more. But, in my defense, I am terrified of the dark and didn’t want to be out all night! The horses were doing great and there was no real reason to slow down other than to gawk, so I guess I did the right thing in this situation. My main goal of the day was to get the second to last loop done before dark. It was close, but we were golden!! I had the most excellent help at this last vetcheck, and appreciated it more than anyone could ever know. Although I was tired, we set out on the last loop in the pitch black, ready to git r’ done! We rode along quietly, chatting here and there, but mostly I was concentrating on following the very well-marked trail. At one point, Replika picked it up and I assume that was after we made the turn at the halfway point. She never once tripped and stayed focused on getting us back safely where she could EAT! 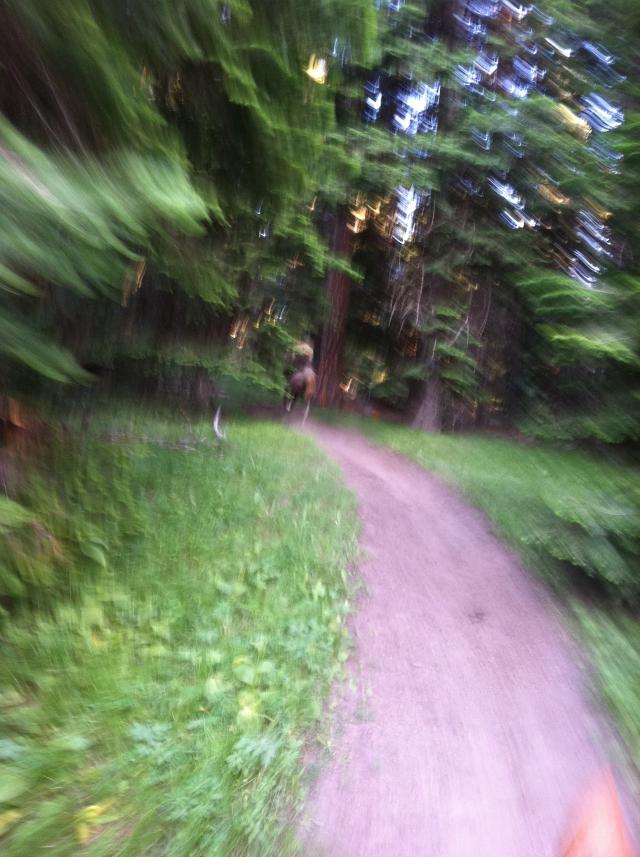 I think it’s safe to say this picture represents the last 20-ish miles of the ride, at least for me!

We hit the main road a mile from camp and I reluctantly pulled my iPhone out of my pack. Well wouldn’t you know it was 12:13AM! I was stoked and waved my phone around yelling “We did it, we did it!” I am sure my friend just rolled her eyes. She just loves riding her pony and I don’t think she cares much if she finishes later rather than earlier. It will be interesting to see if she ever cares to ride with me again!

We got into camp a few minutes later and were greeted by a few special friends. Thank you guys SO MUCH for staying up!! I remember feeling pretty dazed and my mare was ravenous. We completed out CRI, somehow got her untacked and I think I wrapped her legs. Someone wrapped them and it was a pretty dang good job so I’ll assume it was me 🙂 I headed into the LQ and got ready for bed before checking on Replika one last time- she was buried eye-ball deep in her hay bag and from the looks of it the next morning stayed there most of the night! Because we were soooooooo fast (or because we were the only two riders in the 100) we got ready to show for BC. Rep looked AMAZING and used her charisma and charm (ok, so I think I’m the only person in the world who things she’s charming) and plenty of ‘tude to show how great she felt during the trot out. After running me over, she pranced her way back to the vet and about ran over the vet trying to get to more grass. She earned the High Vet Score and Best Condition, but mostly because my poor friend’s horse things trotting out is dumb. Regardless, BC is BC (or so they tell me) and I couldn’t be happier with how fabulous she looked just nine short hours after finishing a tough 100 mile ride. 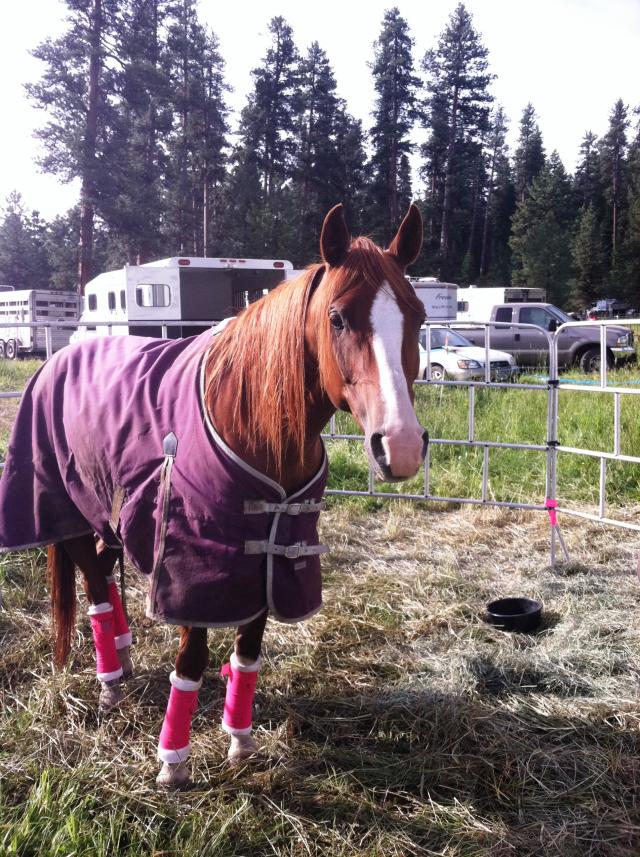 First thing the next day. 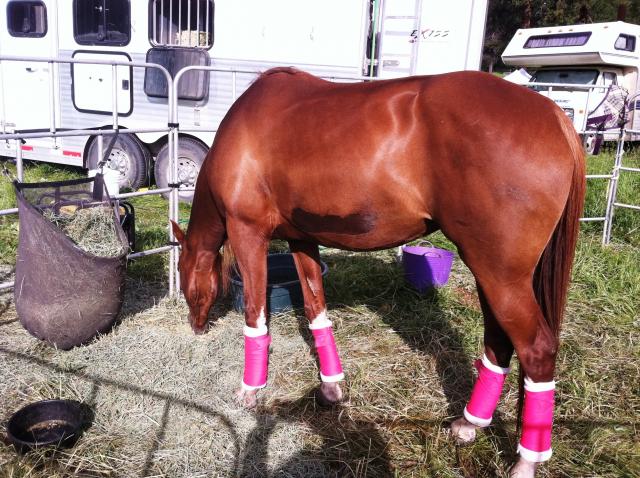 And she ate, and ate and ate..

So, I guess that’s my story in a nutshell. Of course there is much more to it, but it seems like my subconscious doesn’t want to share as it’s keeping all linear thoughts and feelings about the experience to itself. This doesn’t happen often so I’m guessing there is a reason for it. Maybe it’s like what women who give birth say about how their bodies or minds suppress the memory of the pain or else no one would ever give birth more than once in their lives. I think that if people really remembered the “in the moment” feelings that thoughts, no one would do more than one 100? Nah, it wasn’t that bad. I hear the Virginia City 100 is an awful neat ride………

I bet in a few weeks it will sound fantastic!
~ Amanda Washington
SW Idaho