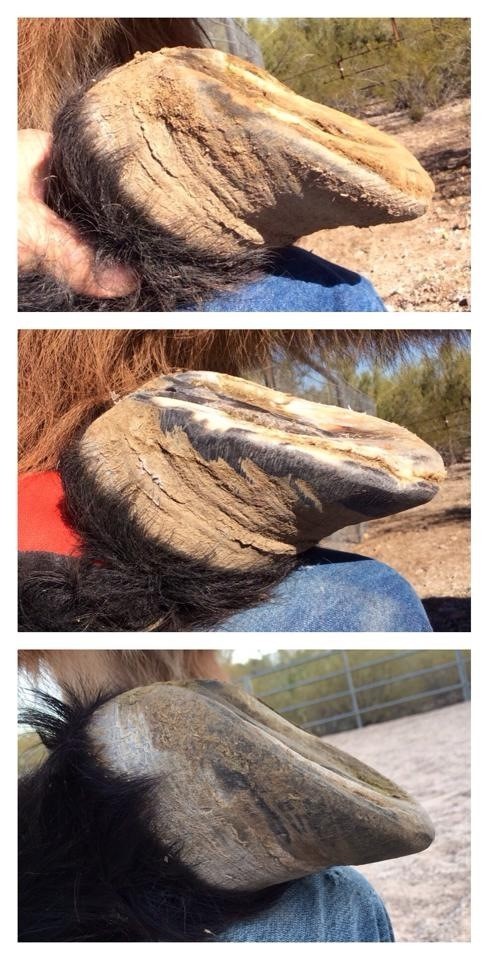 When I was a landscape designer/contractor I loved the rain. I prayed that it would come and water my newly created landscapes because the water from the hose never had the same effect as a good rain. The plants would grow a few more inches, foliage filled in and greened up, and the dust was washed off of the boulders and stones in a way that softened the look of the landscape and heightened the subtle colors of the desert. The rain would freshen everything it touched. My love for rain quickly went away when I started trying to rehab horses feet. 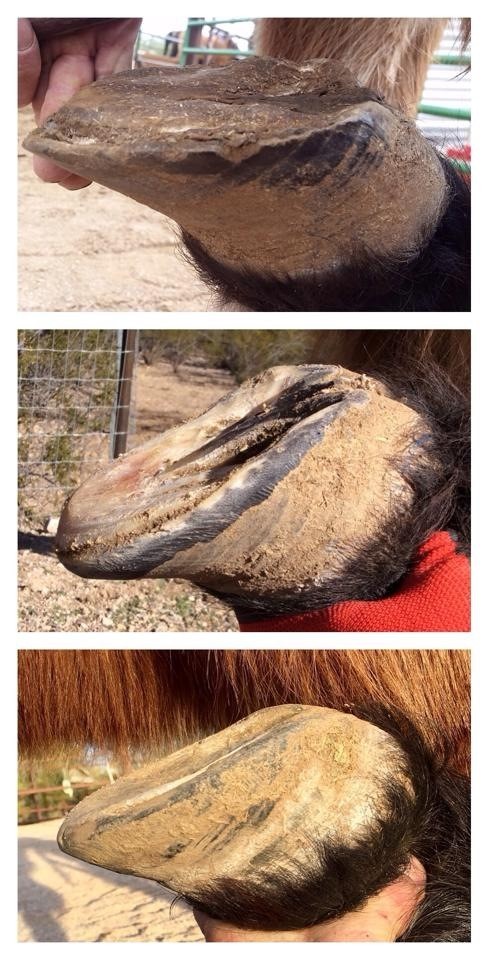 In the beginning, just when I felt like I was making progress with a horse, the rains would come and I’d have horse owner’s calling me worried about their horse being sore. I’d do my best to convince the owner that their horse was just temporarily rain sore and to help them keep their horses as comfortable as possible until it dried out, often driving out to see if there was something else I could do. Many times the drive wasn’t wasted and all I needed to do was clean the hard packed mud clod off of their soles. This usually provided immediate relief, however mud would accumulate again and the owner would have to keep their feet clean. Over the years I tried everything to prevent rain soreness:

I did everything I could think of, including warning the owner up front that they would likely experience soreness during the rains for the first year or two. 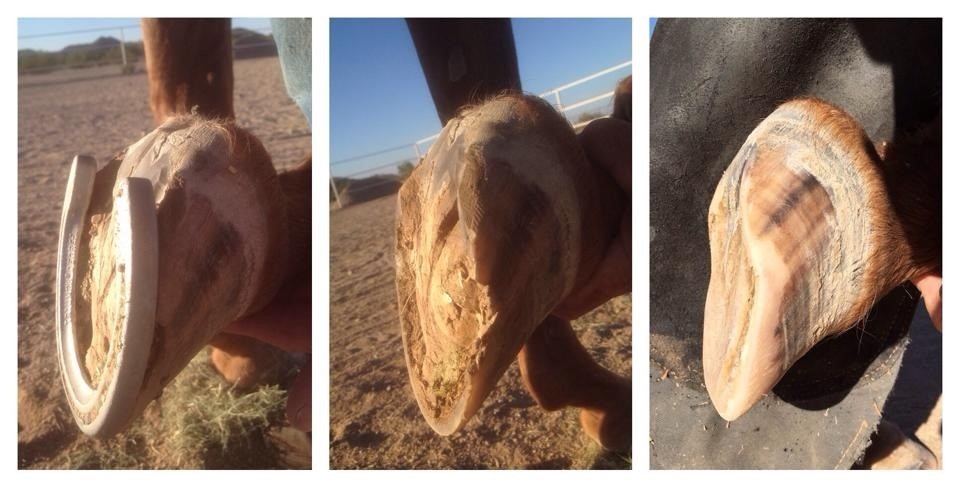 After about 10 years of dreading the rains, and just when I was starting to get used to warning the owners before we started the rehabilitation process, I started having much better results. At first I attributed that to being prepared with boots and managing the environment, but some horses were still having trouble even when their owners were being proactive. After a long time of trying to figure out how to predict and prevent this problem I realized that some of the horses were getting along fine with big old mud clods on their soles while others were lame and the horses that were getting along fine had better feet at the end of the rainy season while the lame horses feet looked worse. I really wanted to understand what the difference was.

Over time I became aware of a pattern. After things dried out, the improved feet had a tremendous amount of crumbly sole that easily exfoliated, revealing even more concavity than they went into the wet season with, while the the horses that went in with flatter feet had even flatter feet by the end of the season. This realization caused me to try to help horses build as much sole as possible during the dry seasons. Convincing the owners to do their part was a challenge but I had a much better success rate with the ones that cooperated.

First I had to get the owners to see and understand when the feet were improving and when they were declining instead of just riding their horse until they broke down, and then freaking out. Next I had to get them involved in the process so they felt more like it was a collaboration. After they knew what progress looked like and they realized that the changes were happening after they improved the footing and/or started using boots and pads they began to take even more ownership of the rehab process. Once it started feeling like team work, their horse’s feet started getting even better. 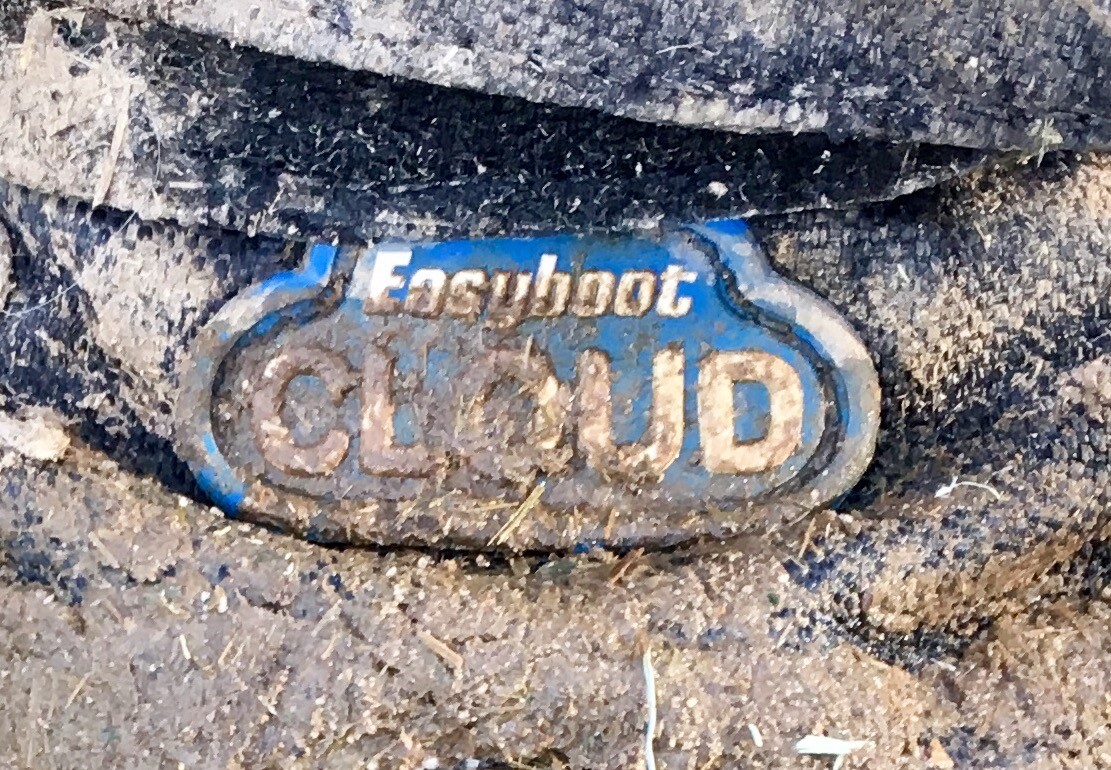 I know 2016 was a bad year for a lot of folks but I had some of the toughest founder cases with the quickest and best turnarounds that I’ve ever seen. One of the biggest reasons for this was the arrival of the EasyCare Cloud boot. I used this boot extensively to get foundered and rain sore horses through the wet weather. I went through more than one pair in a few months time with several horses. In many of the extreme cases the boots were left on until the sun was shining. Sometimes they only had them off for an hour or two for the feet and the boots to dry out. I was able to trim frequently enough to keep the dead tissue to a minimum. This kept the feet from getting infected and allowed extra comfort after a trim. I taught the owners to use the boots as much as needed, but as little as possible, and to gently graduate their horses out of them until their horses were moving around comfortably totally bare. 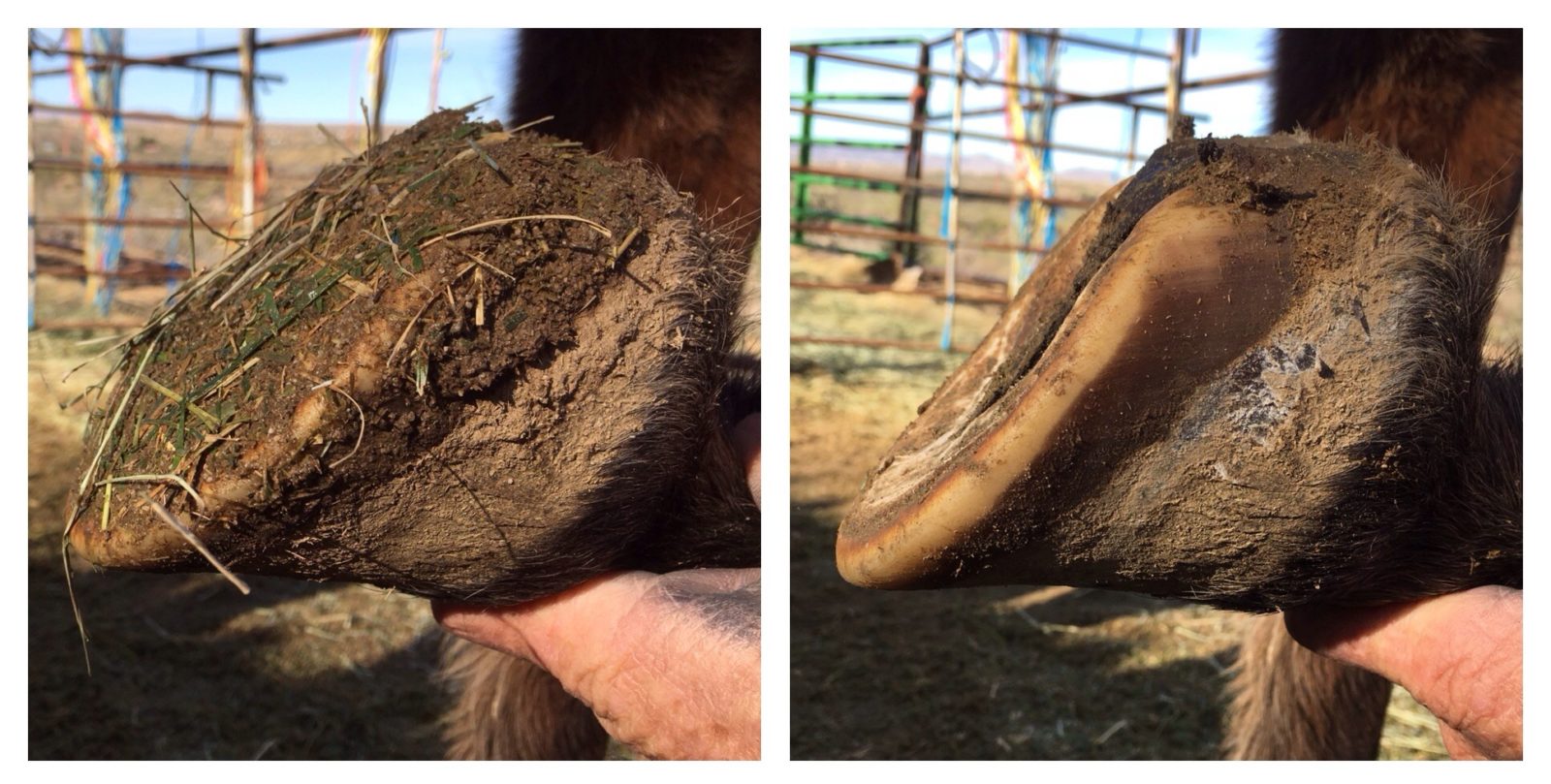 Over the last few years I’ve learned to love the rain again. I’ve also learned some interesting things about horse’s feet. In wet weather the mud that collects in a concave sole works somewhat like a sponge. When a healthy concave hoof with thick live sole gets packed with mud, the weight of the horse squeezes the moisture out of the mud and keeps the sole dry. An old fashioned orange juice squeezer might be a better analogy. The mud ball elevates the foot off of the  ground just enough to let the weight of the horse squeeze the water out. They can go for weeks and maybe months like this if they have adequate concavity in the beginning. Once a horse is acclimated to their weight bearing being distributed between their heels and the peripheral edge of their sole at the toe, the sole will thicken and form a bowl (concavity). Achieving this is possible for most horses if they have the right owner/trimmer team. These horses are the ones that benefit from the rain. For the horses that go into the wet season with thin, flat, or even prolapsed soles, Easyboot Clouds used responsibly in conjunction with well timed and properly balanced trimming, should at the very least get a horse comfortably through the wet weather.

An added benefit is that the rocker effect of the mud clod on a properly balanced, thick, concave sole helps to develop the digital cushion and lateral cartilages because the weight bearing is over the back of the foot where it belongs. This puts the center of the mud ball directly under the soft regenerative tissue in the back half of the foot, and increases flexion in the hoof capsule, while the rocker effect on a thin flat sole caused by excessive weight bearing on the toe puts the center of the mud ball directly under the coffin bone in the front half of the foot. This causes excruciating pain and magnifies the strain on the Deep Digital Flexor Tendon along with the ligaments and joints in the leg. Flexion of the hoof capsule is increased this way too, but in a harmful way.

I believe some of the founder cases from this year (pictured above) may not have been as successful without the Easyboot Cloud.