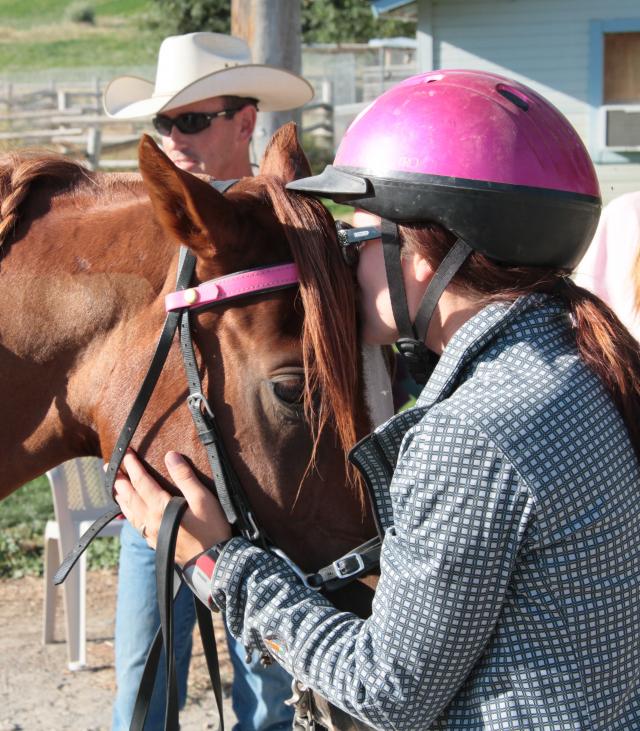 A family photo- Replika, myself and my husband. Thanks for the picture Leonard!

I promised in last week’s post that I would return to the topic at hand – hoof boots and natural hoof care. So here we go! But first I just have to say that this ride marks a year with my mare. Last year’s Canyonlands experience was much different than this years, not necessarily better or worse, just different. Last year we were only four weeks into Replika’s barefoot transition. She was new to me and I didn’t know how much bottom she had, what she liked to eat, or how she liked to be ridden. While she was sound, I took it very slowly as I was very conscientious about rocks and hard footing, given the fact she was newly barefoot. I worried and fretted, was probably over-cautious and hoped I had done right by her at the end. With the protection of Easyboot Glue-Ons and Goober Glue, we did four days. While the results were the same this year (200 miles in 4 days), the “getting there” was much, much different. 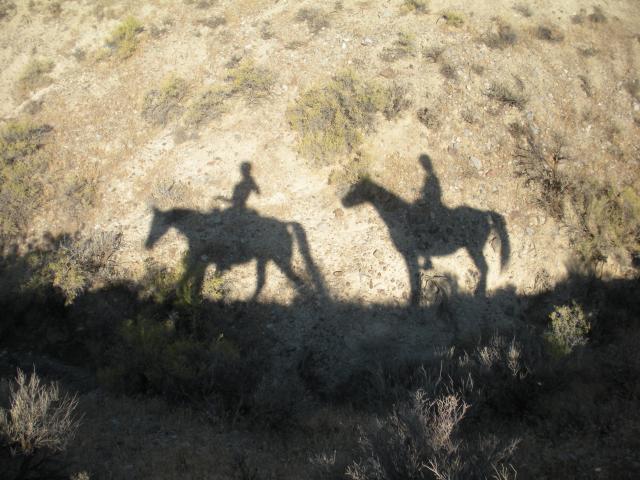 Me and Elly, both ponies in Easyboot Glue-Ons, riding the same ride.

I used the same conconction of Goober Glue on the sole and around the bottom of the boot, and Adhere around the top. Again, my boots performed fabulously, but this time Replika strode out across the trail, never shortening or slowing through some of the stuff she slowed through last year, like gravel roads and jeep roads with embedded rock. She continued to amaze me, every single day. 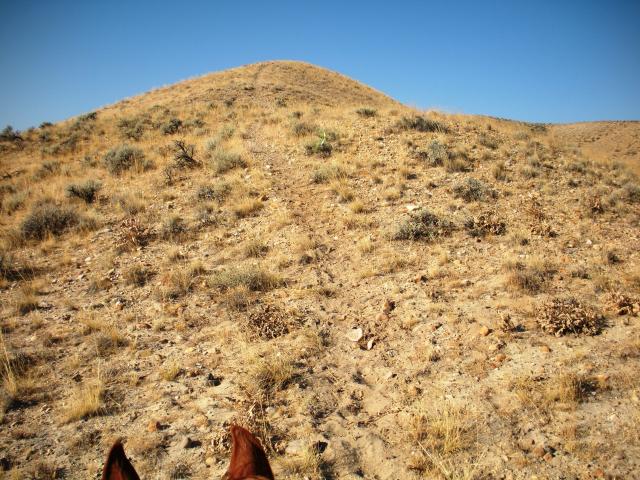 It’s funny, but I guess I never thought so many Northwest riders would be riding booted this quickly. It seems like yesterday, we were one of two or three booted riders, and now it seems to be nearing half. And it’s certainly not just the slower riders, either. While I know going barefoot and booted has been proven at speed in other regions, the riders here still have the false perception that barefoot horses can’t be ridden fast, and that boots don’t stay on. Riiiiiiiiiiight. I think both those beliefs HAVE been proven otherwise!

Upon reflection, I found it funny that most of my rides this year have been in the company of other booted buddies. Although one of my most favorite riding buddies uses steel shoes (I’m working on her!), my other partners have been booted. I certainly don’t set out NOT to ride with those in shoes, but I find riding with other booted horses is easier as the decisions regarding where to slow down or speed up are generally the same. Like I said last week, the three of us in boots were able to motor down the paved section of trail where I have slowed to walk in the past with my shod friends. 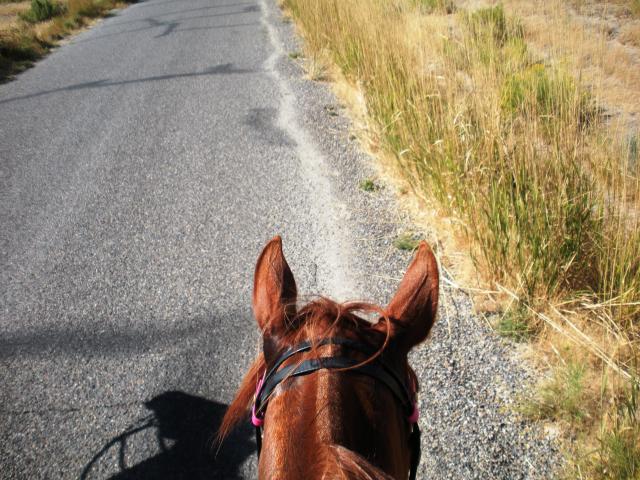 Headed down the miles of pavement. Day 2.

Replika had her boots on for a total of eight days. After taking them off, I once again found that a) she still had feet, and b) they weren’t about to fall off. Just like with shoes and pads, there is obviously moisture in the boot and yes the sole does exfoiliate. However, having shod horses with pads in the past, the level of moisture in the hoof doesn’t even compare to the hoof after having a pad in place for eight weeks. I also like to take advantage of certain situations, and find that a quick trim is much easier after pulling boots than after the foot has had a few hours to dry out and morph back into a steel mallet. 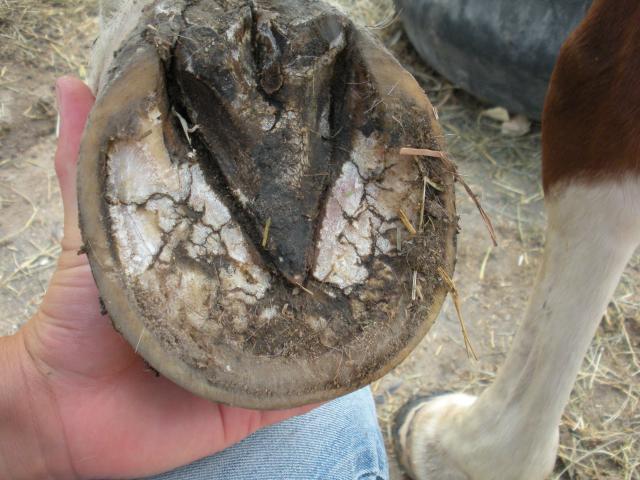 Replika’s front foot immediately after removing her boot and trimming up a bit.

Another aspect of booting my horse that I value and love is the fact I can see exactly where she is wearing her boots during certain time periods, meaning how she is wearing her boots during a ride. As she had just come off an injury to the right hind, I was extremely cognizant of how she *felt* throughout the miles. I felt like she wasn’t as fluid on the left diagnal on the first day, but she felt smooth and even after the intitial 50 miles. It was interesting to see that she had worn a thin spot in her right hind boot, which I found while taking off that boot. Considering the fact she wore holes clean through either one or both (sheesh it sucks getting old- I just can’t remember!) of her hind boots last year, and the fact that we are able to gauge things like that is a handy tool. 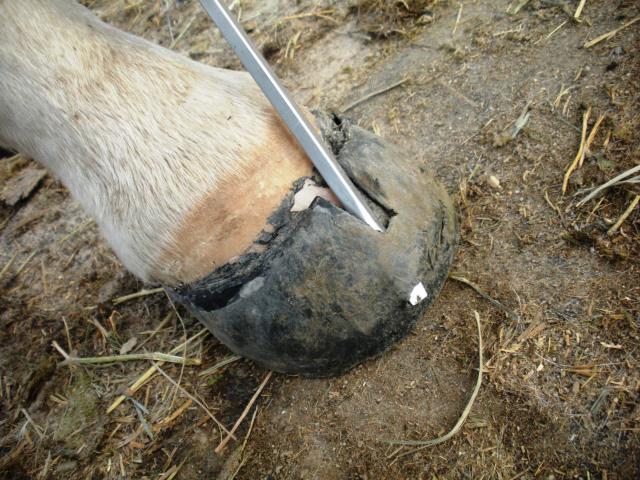 Right hind foot. I am fairly certain I wouldn’t have noticed the extra wear should she have been shod. I am thankful for the extra information, any way we can get it.

I trimmed up the mare after pulling her boots, and just a few days ago we had a nighttime rain. I pulled her out the next morning and finished up my trim finding her feet much softer after a night of rain than after a week in boots. I am always amazed at the amount of growth they have after riding so many miles. For now, she is completely trimmed up and enjoying the rest of her vacation. 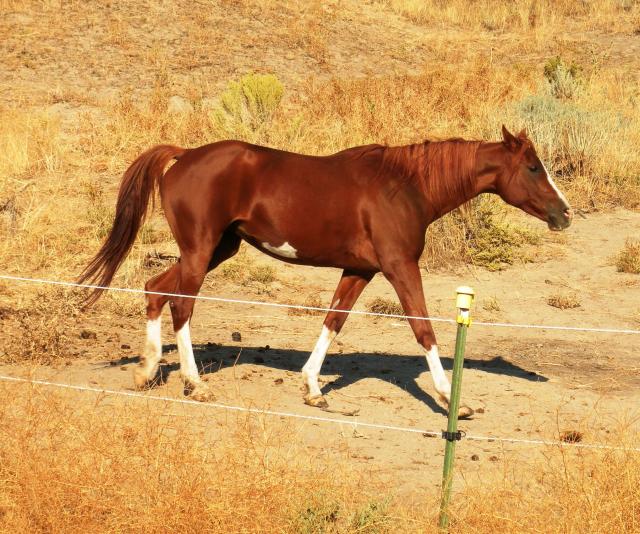 The current question is- who do I take to the last ride of the season?!?!