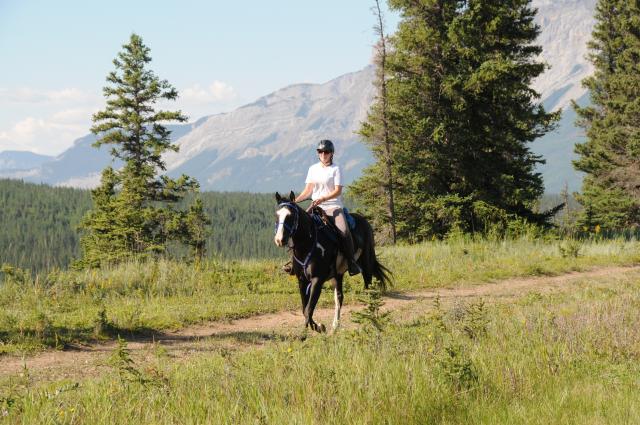 The third annual Brule Lake Combined Ride was just east of Jasper, Alberta, Canada on a trail that will take your breath away. It was almost a month ago already and I can’t stop thinking about it; next year’s version can’t come soon enough!

We came, we saw, we had had an awesome time (with terrible scores).

It had been the first weekend of August and the organizers had held an Endurance Ride on the Saturday and a Competitive Trail Ride which we were there to compete in on the Sunday.

The drive is always a killer for me, nearly six hours in the cramped truck with enough stuff for three people and one smelly dog.

We arrived and found a spot to camp although it wasn’t ideal as the mares were stuck up on a hill in their pens. Because we came in a day late, all the endurance riders and volunteers who had showed up the day before had the ideal camp sites. Oh well, it happens every year.

Our initial vet-in went great as well as the ride meeting where they briefed us on which way to go so we would hopefully not get lost, trail hazards, places to expect some difficultly, etc. The mentioned parts of the trail were rocky but there was always somewhere you could ride off to the side that was softer. The previous day’s endurance ride had been won by a barefoot horse and rider team and most barefoot/booted competitors I spoke with said boots were unnecessary.

Fast forward to the next day. 5:00 AM always comes early which is when I get up to feed the horses, the dog, myself and start trying to get organized for the day.

The previous day’s conversations with fellow riders about footwear had me thinking. I usually train in boots because we have nothing but gravel roads to train on but I knew from past rides that this ride had lots of sandy two track trails with just the odd rocky area. What to do? What to do! Were my mare’s feet up to the barefoot challenge? We were only going 25 miles and we’d done it in the past before we discovered the true merits of Easyboots and particularly our Epics. I decided to go barefoot as one of my boot cables was just starting to fray and it would just be one less thing I had to worry about. This decision would come back to bite me later.

For once we were tacked up in enough time to get a little warm up in before we hit the trail. Katchina was misbehaving as much as is possible for her, spinning and trying to bolt in the direction of the trail head where she had seen other horses leave from. We were partnered up with our usual riding buddies and finally our numbers were called and we were off.

80% of the trail was new this year and it was just beautiful running through rolling hills with the mountains in the background. About seven miles in we hit our first vet check and came though that with no points lost. My Mare Katchina was feeling good and pulsed down no problem. We headed off down the road again and ducked back into the bush where we started heading up up up the Burn Trail and then the Prime Mine trail.

It had either rained a lot in the days previous, or there was a spring somewhere at the top because there was a constant flowing little “stream” of water coming down the trail making it pretty slick. Add to that the incline and we were not going fast up that trail. As we reached the top we figured we were a bit behind schedule and started the down down down through some really thick brush faster than I am accustomed to. I couldn’t very well watch where we were going as I was ducking branches and Katchina didn’t seem to be watching where she was going either as she ducked her head to avoid the brush as well; but she kept on keepin’ on down that hill at quite a good clip, slipping here and there, but guiding us safely to the bottom; at least she knows what she’s doing! 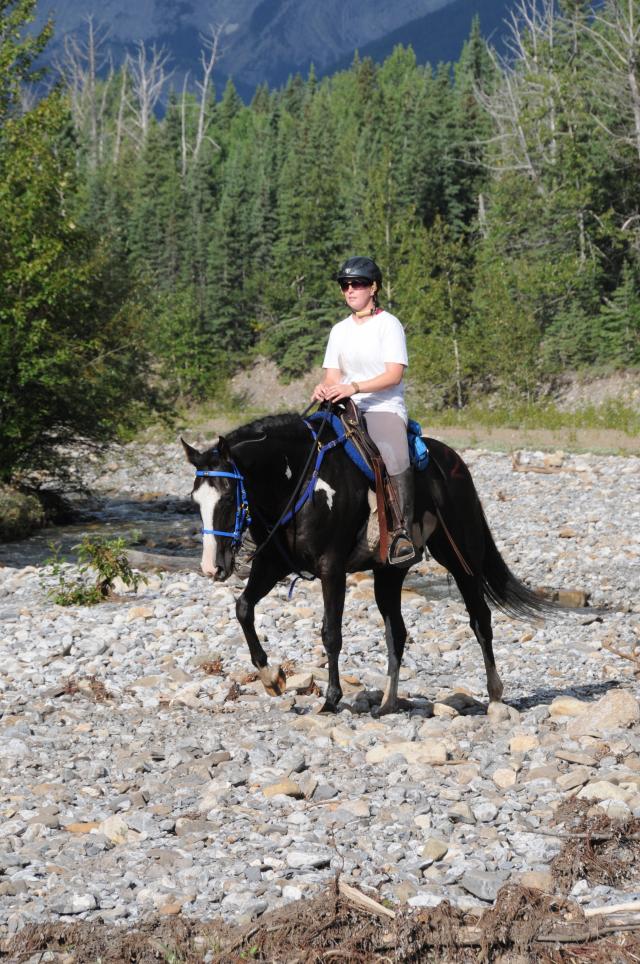 Once at the bottom, we crossed the river quite a few times and picked our way along the trail back through the meadows and past the pet cemetery where we had an awesome view of Brule Lake below. We raced across a narrow little path that traveled parallel to the road but about 50 yards down on the steep slope. We chugged up a hill and sneakily placed just where we didn’t want it was another vet check. We weren’t so lucky this time and got some pretty terrible numbers for our P&R. The day was getting hot at this point, the hill was short but steep and obviously my horse just wasn’t in good enough condition to pulse down quite in time. We weren’t bad enough to get held up so off we went again for the last seven miles of trail.

I wanted to have time to walk in the last few miles so we booked it along the meadow in the grazing lease and around the far east side of the trail loop. Then we came to the big hill. Two and a bit miles of 20-degree pitch up and up and up. Rocky quad type trail, just what we all love after having gone 20 miles. Katchina was a trooper and marched up that sucker with more enthusiasm than I had expected from her.

We came to the two-mile marker and this is usually where my riding buddy and I split. She likes to come in at optimum time but I’ll take the extra 15 minutes thank you very much. So I got off Katchina and we watched Tara and Pratt disappear over the hill. Usually Katchina is so tired by this point that she doesn’t care she’s alone; but not this time. She called and screamed and spun circles, it was all I could do to get back on my horse and not have her leave without me. We walked fast enough to catch up to our friends, not by my choosing though. She tucked her chin to her chest (the I’m going to buck type of tuck) in such a way that I no longer had any control of the brakes. She did only walk but fast enough that we caught up with our friends and we all walked in together.

Our final vet check didn’t go so hot either with the vet letting me know Katchina was lame on one of her hind legs. She had slipped on quite a few roots and scuffed up her fetlocks a bit, but it’s also possible she may have gotten a sole bruise a bruise somewhere along the way. Either way I wasn’t sure so I took her back to the trailer and doctored up all her possible ailments.

The next day at awards I was shocked to hear we had gotten fourth place. I figured we would have been ineligible for placing due to our lameness but it seems someone showed us mercy. Granted we were fourth out of four; a.k.a. last place; but that’s ok. Just placing still keeps us in the running for year-end awards which is my ultimate goal.

I should have ridden in my boots and just taken the one off it the cable did happen to snap during the ride. Having conditioned in them so much it’s likely my mare’s feet were not as tough as they once were when we were conditioning without boots making sole bruising more likely. The boots may have even saved us the scrapes from the tree roots by giving her pasterns a bit of protection. Hindsight is very much 20/20.

In the end we had fun. It was a good ride, a tough trail and although I was feeling some CTR burnout heading up to this one I’m ready to go again, give me another shot at it, I know we can do better.