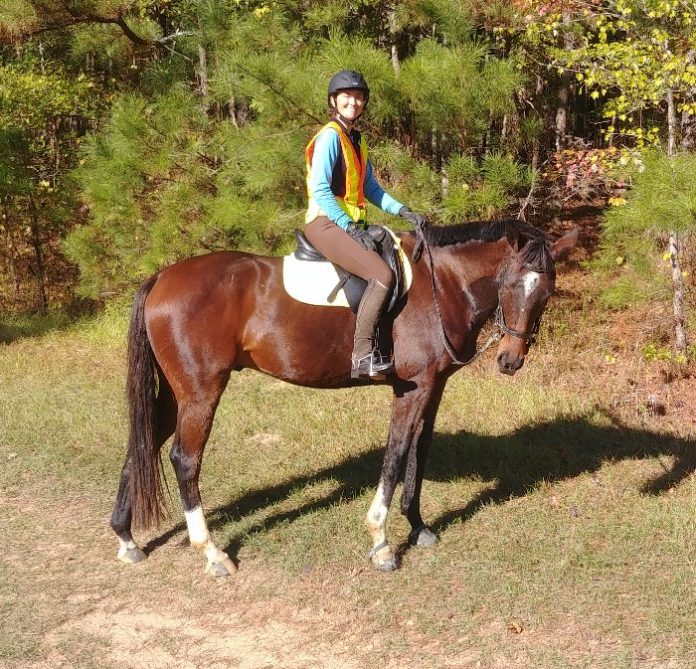 The Easyboot Fury is celebrating its 1 year anniversary! In honor of that milestone, we’d like to share an honest review from a customer in North Carolina who tried out the Easyboot Fury Sling.

Find Brena’s original post from December 14, 2019, here, and read more about being an adult amateur event rider, putting your horse first, and listening closely along the way on her website, teamflyingsolo.com.

We appreciate our customers putting our products to the test and giving us their honest feedback. Thank you, Brena!

Boots Are Never 100% Easy: Review Of The New Easyboot Fury

Echo remains barefoot for the time being (since last December) – because his feet are small, I think this is his best chance to develop the best foot he can grow while he is still young, before his workload gets to where he will require shoes.  Because I’m pretty certain he will, at least up front.

To increase his comfort while he works towards the goal of a heel-first landing, I put boots on his front feet for most of our rides.  Which meant embarking on the (absolutely not) joyous task of finding which boot worked best for him.  I’ve learned in the past that different brands suit different foot shapes & different models suit different riding styles.

Solo’s Cavallo Sports & his old EasyBoot Epics were both too big for Echo, so time to explore some new options.

I tried Scoot Boots after reading all the interwebz love for them.  Long story short, so far they have not worked for his feet.  Even with shims, they twist.  I’m going to give them one more try, since his feet have spread some, but if they still don’t work, I will be selling some basically-new Scoot Boots soon.  I like a lot about them in concept.

Making it trickier, Echo’s fronts don’t quite match:  he’s got one foot that spends all its time trying to be upright & boxy, while the other prefers to languish on the lower side.  They’re gradually getting closer, but hooves are always a slow torturous process.  Because they’ve already changed & will continue to do so, EasyCare’s new Fury design caught my eye because it’s adjustable.  I got the basic Sling version, I did not like the big metal buckle on the front of the Heart version, I envisioned it catching many things & introducing an extra hazard over jumps.  And uh, it’s a heart & I am not 9 years old & I hate things with hearts on them.

There are three points you can adjust:

I’m going to ignore the 3rd one because I didn’t use it.  Length & height both have a decent amount of adjustability, so you can tweak fit through a trim cycle or if your horse doesn’t have magical feet that fit stock sizes (like mine).  I measured a bunch of times, very carefully, but still ended up buying two sizes & sending back the one that didn’t work.  I definitely recommend this approach.  EasyCare has a “fit kit” too, but if you buy from somewhere with free returns, that saves poor people like me a few dollars.

The initial adjusting is somewhat fiddly.  You could do the length adjustment on the fly as long as you had a phillips head screwdriver with you.  The height rivets though, require both a screwdriver & a ridiculous little tool that comes with the boot.

You know those horrible “tools” that come with assemble-your-own furniture, that are tiny & awful to use & make you want to stab forks in your eyes?  Yep, it’s that kind of tool, apparently made for tiny leprechaun hands that need no grip.  I’m hopeful in the future EasyCare will change this design so you can just use a flat head screwdriver or some normal human tool.  Or at least put a human-sized grip on it.

After watching the videos, I spent an afternoon adjusting the boots to Echo’s feet.  It was really nice to be able to accommodate the slightly different foot shapes.  Once you decide where you want to set them, you add a drop of LocTite (thoughtfully included with each boot) so your screws don’t decide to go walkabout mid-ride.  All of mine have remained tight so far.

I’ve been using these off & on (I go barefoot when the ground is soft or we just do walk work) for about five months now.  Overall impression:  favourable.  I would buy these boots again.

So I’ve been fairly happy with them.  I have noticed that he may be outgrowing them as his heels spread, which simultaneously makes me sad because they weren’t free but happy because heels spreading!  It means the boots are doing their job of helping us move towards that consistent heel-landing goal!  We’ll see how it goes – even if I do end up having to sell them, they’ve still been cheaper than 5-6 months of shoes while allowing me to live the joy of never worrying about pulled shoes, so worth it.

Those are the highlights.  I’m happy to answer any questions in the comments.  If you want to try them, DO watch the videos & DO get a couple sizes to try, it will make your life easier.