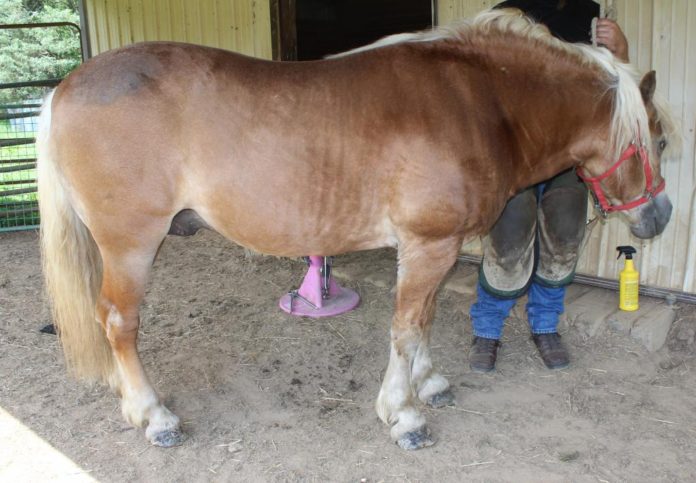 As farriers, we are often asked general questions about the horses we see on a daily basis. What fly spray do we like, or what feed would we recommend? We also get questions about the horse’s body condition and weight, which can be a very touchy subject. No one wants to hear their horse is obese. Because I deal with so many horses who founder from metabolic disease, I see many obese horses. If your horse is fat, I’m going to tell you he’s fat, and expect you to help him lose weight. Tough love. 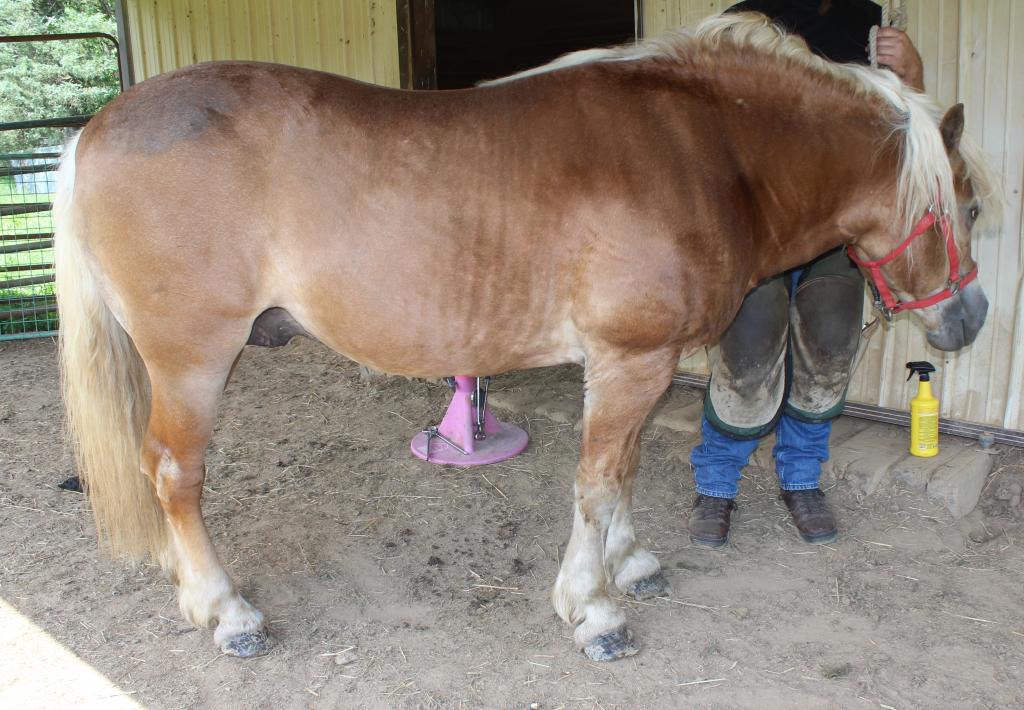 So how do you know if your horse is too fat, too thin, or just right?

The Henneke Scoring System is a scientific method of evaluating a horse’s body condition regardless of breed, body type, sex or age. It was developed in 1983 by Don Henneke, PhD, during his graduate study at Texas A & M University. It is based on both visual appraisal and palpable fat cover of the six major points of the horse that are most responsive to changes in body fat.

The Henneke Chart is a standardized scoring system, whereas the terms, “skinny”, “thin”, “emaciated” or “fat” are all subjective terms that have different meanings to different people. It is widely used by law enforcement and is accepted in a court of law. 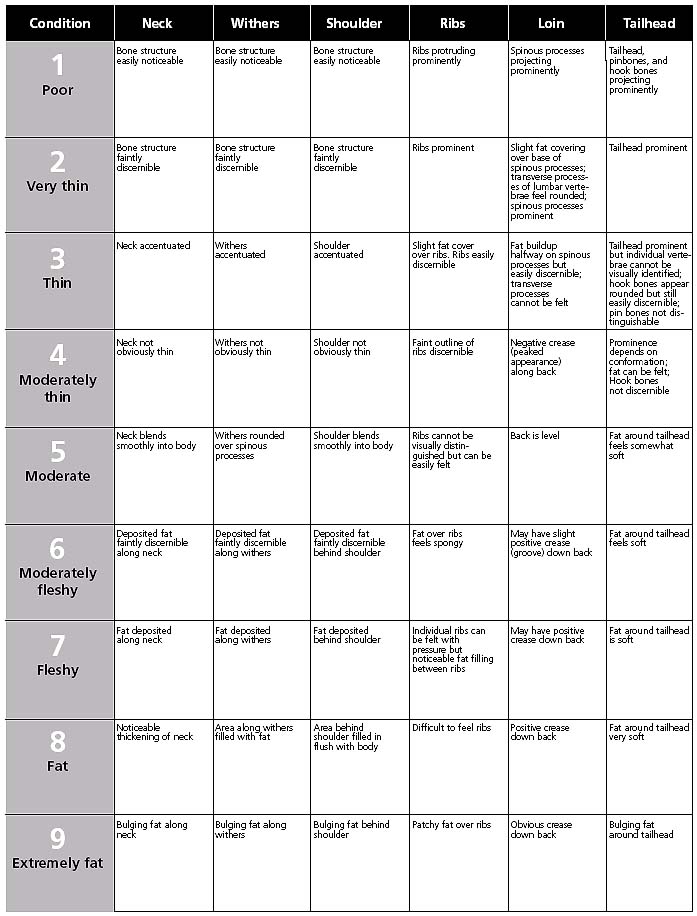 I think if we’re honest with ourselves we tend to like our horses a bit rounder. Here is my horse right before he foundered and led me to become a farrier. I had no idea he was obese. He was in full dressage training, and I assumed he had a stocky build and good muscle. His Henneke Body Condition Score (BCS) here is actually an 8. 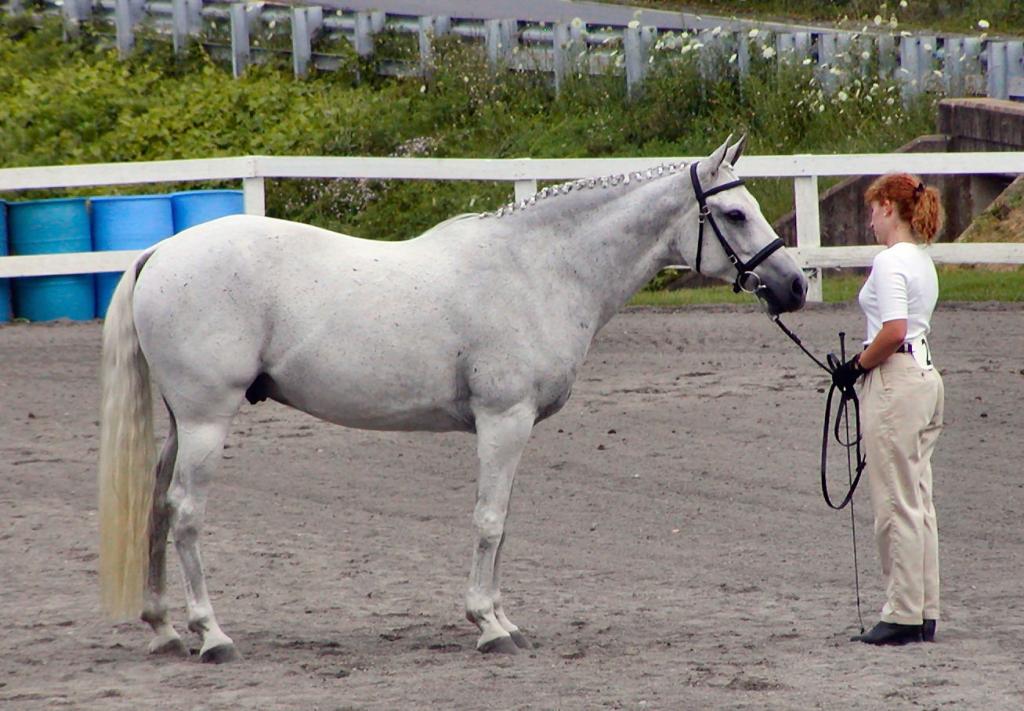 I wish I had known at that time that one of the largest risk factors for laminitis is obesity. After my poor guy foundered due to insulin resistance, I worked diligently to get the weight off of him. After two years, his BCS had dropped to a 4 and once back into work he looked like this: 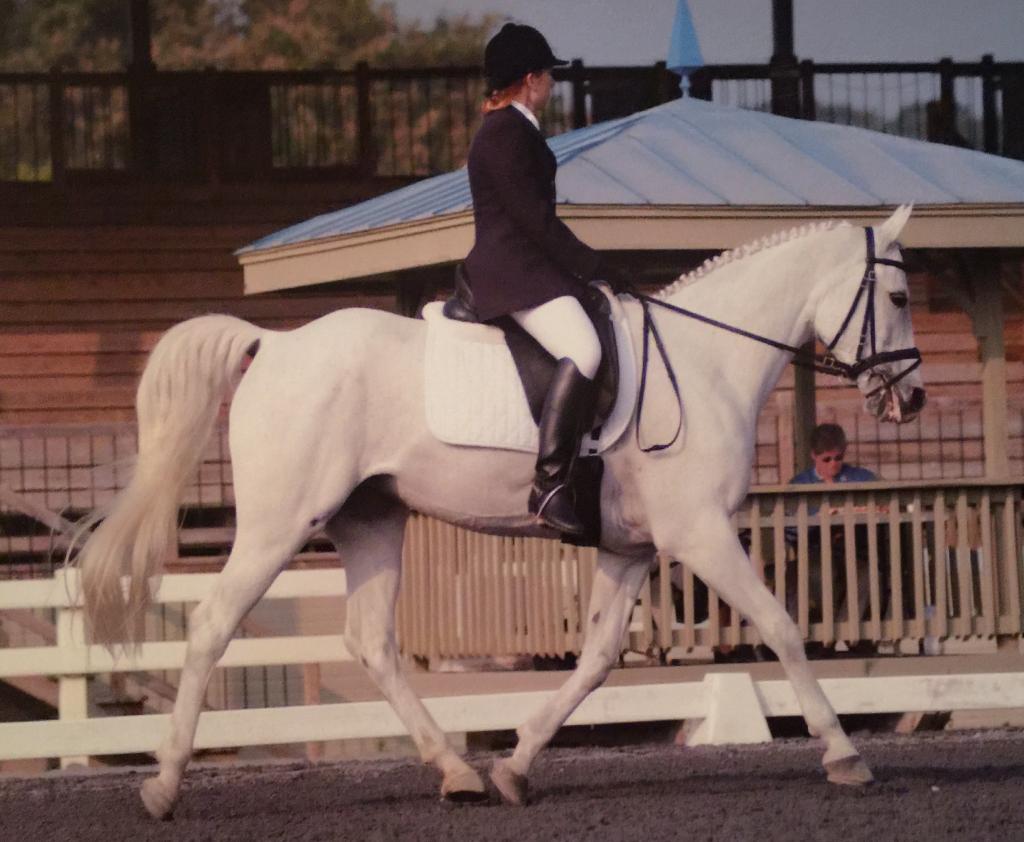 Would you guess this is the same horse? My horse was not stocky in the first photo. He was fat. 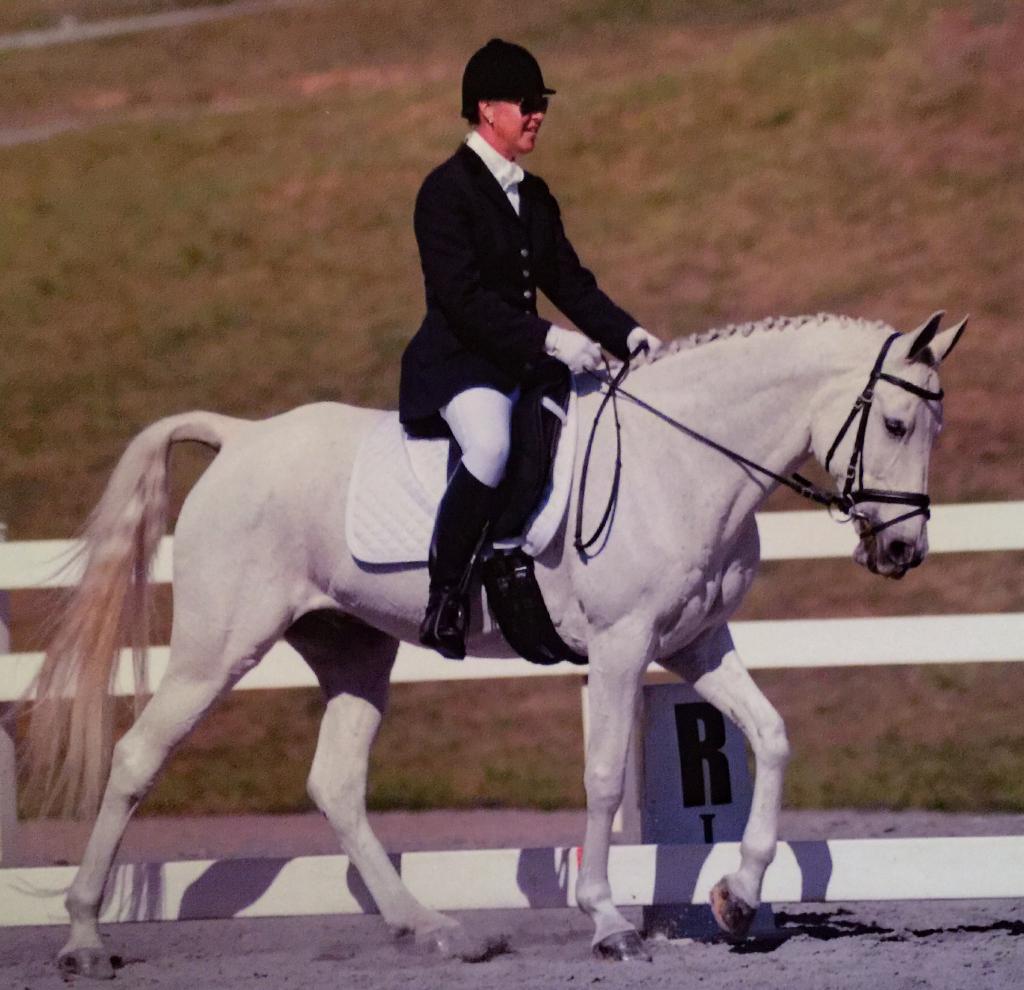 Again looking like a very different horse. Be careful not to think your horse is “big boned” and in reality have an overweight animal. I learned a lot about my assumptions regarding body condition from using the Henneke Body Scoring System and objectively assessing his weight.

Many times I see owners give up too early and get complacent with weight loss for their obese horses. This halflinger was on 24/7 turnout and the owner diligently muzzled her and dropped 150 lbs off her, even after dropping 150 pounds she still foundered. Amazingly, the owner was able to get another 150 lbs off of her to help her feet and control her insulin resistance by putting her on a dry lot.

In the first photo, she is about a 9 on the Body Condition Scale. After huge improvements in her weight in the second photo she’s still about a 6-7 BCS. Finally in the third photo, she’s a 5 BCS and her feet are stable. Note the cresty neck, fat pads over her shoulders, back, ribs and tail head finally disappearing in the last photo.

I often hear “Oh they’ve always had that crest, it won’t go away”. In my experience, it will if the metabolic condition is really controlled. Here is a horse we rehabilitated at Daisy Haven Farm after foundering due to Insulin Resistance. She was with me for four months. In that time, we worked diligently on her feet, while she lived in a dry lot with a controlled diet designed to help her get to an ideal weight. As you can see from the photos here, her body condition greatly improved, going from a BSC of 8 to BCS of 3.5-4 when she was ready to go home. She is now ready to get back into work and build back muscle. 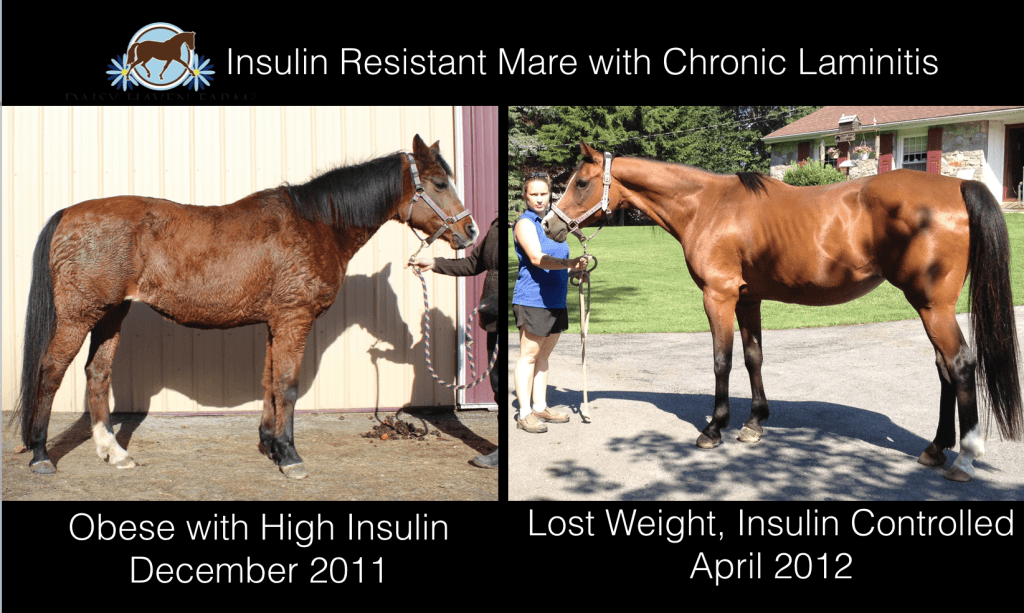 For more information about this horse and her feet, please see this article written on The Horse: Rehabilitating Horses with EMS-Associated Laminitis.

When observing body condition with the Henneke Scale, it is recommended to use your hands and with firm pressure investigate all 6 points on the horse’s body. Here is an example of a horse who has his ribs showing but actually quite obese. Note the cresty neck, fat behind his shoulder and withers, and at his tail head. Do not be complacent in helping a horse like this lose weight. The visible ribs yet having prominent fat pads actually makes this horse a higher risk for laminitis than a horse who is generally obese with fat evenly distributed over the entire body. 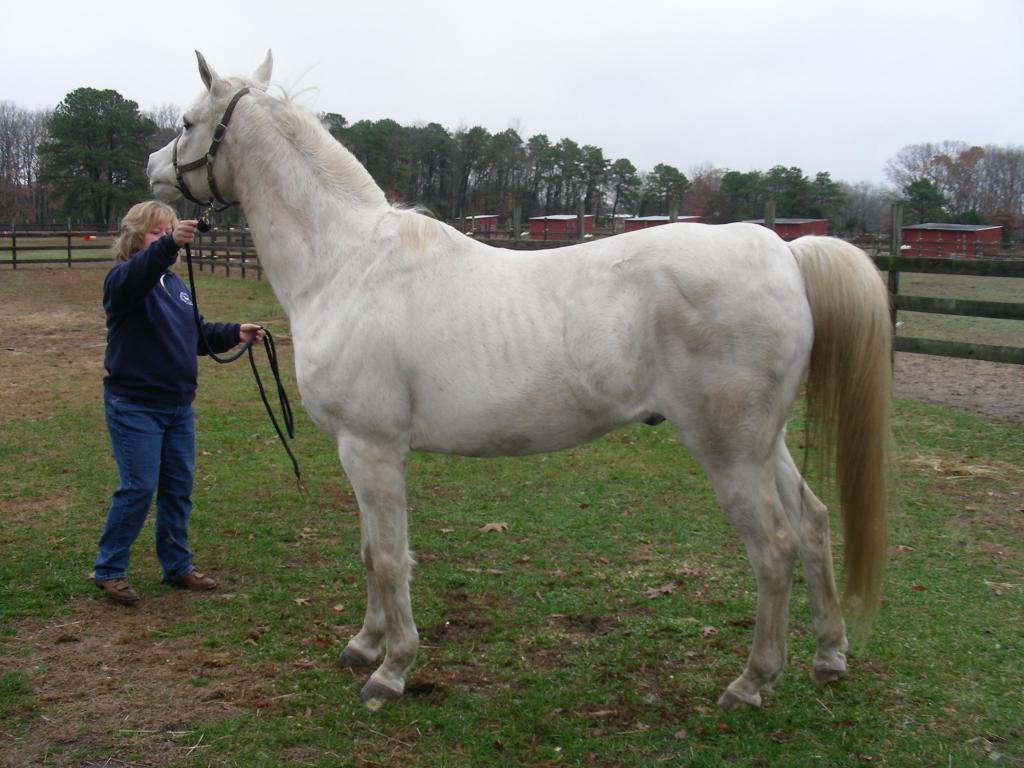 We see thin horses and we think the horse is being neglected or abused. In my mind, obese horses are also neglected or even abused, admittedly often due to lack of knowledge. We are literally “killing them with kindness”. Please objectively assess your horse’s body condition on a regular basis. Keeping your horse about a BCS of 5 on the Henneke scale is one of the most important factors in preventing metabolic laminitis.

For more information about Daisy and the work we do at Daisy Haven Farm, Inc. please see DaisyHavenFarm.com and IntegrativeHoofSchool.com.