Bob Allen, from Mars Hill, North Carolina, contacted me about his donkeys. He told me that the donkey that he rode all the time stumbled on the rocky trails around his house and he thought that our Easyboots would probably give him more traction, but he didn’t think we could find a good fit for a donkey. If you’ve read my blogs, you know that I’ve worked with some mules, so when I got Bob’s donkey’s measurements, I thought that the Epic would be a good boot for him.

“Every time I would ride my donkey down hill, either on loose gravel roads or rough rocky trails, he would stumble eight to ten times in a quarter mile.”

“I tried the EasyCare Epic and after four trails rides, he hasn’t stumbled even one time! This has been a very good product and I would highly recommend it.”

Bob called me after he had mailed his letter and these pictures. He said that he and his daughter went for a two and a half hour ride and she was amazed how good the boots worked for his donkey. 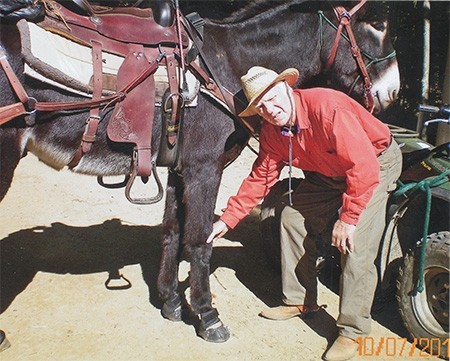 He also sent me a birth announcement for their newest donkey addition, Candy, who was 10 minutes old in the picture that he sent. She is 38 inches height to withers; however, her ear spread to tip is 28 inches!

Bob said that you can call him anytime for references, “Just get my number from EasyCare.”