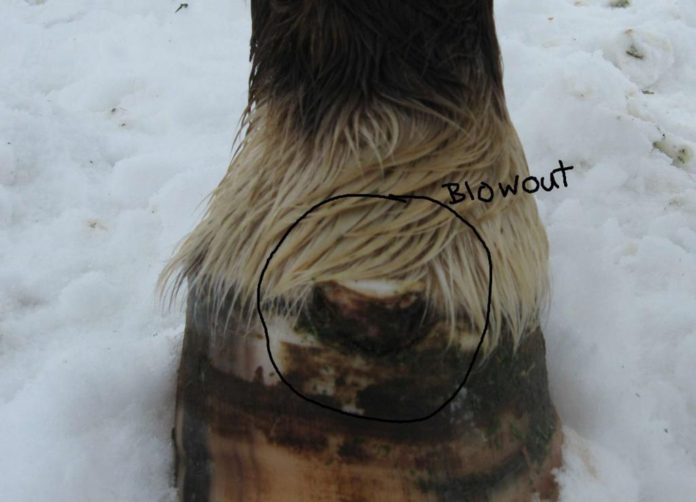 What does a year in the life of a hoof injury look like? If you ever wondered here is one case study of my own gelding with a pretty nasty injury to the coronet band.

Late January 2014, Brass either had an abscess blowout or he stepped on himself. I never really knew which but I suspected an abscess. The ground had been frozen for a few weeks and I wasn’t doing much with him other than thinking of the riding I’d do when the weather got better. I was gone to PNER Convention for a couple days and came home to find a nice big hole in the coronary band of his right front hoof. The wound oozed and weeped, indicative of an abscess but I since I’d been gone I hadn’t observed the lameness that usually goes with it.

No sooner did that happen and the weather broke and we had mud everywhere and I was busy trying to keep it clean so it would heal. A couple days later we had a blizzard. The snow cleaned up the wound and two weeks after injury it was beginning to grow down the hoof.

Fortunately hoof growth allows the horse to renew the outer layer of his hoof. Just like our fingernails, the damage grows out and gradually gets trimmed away. 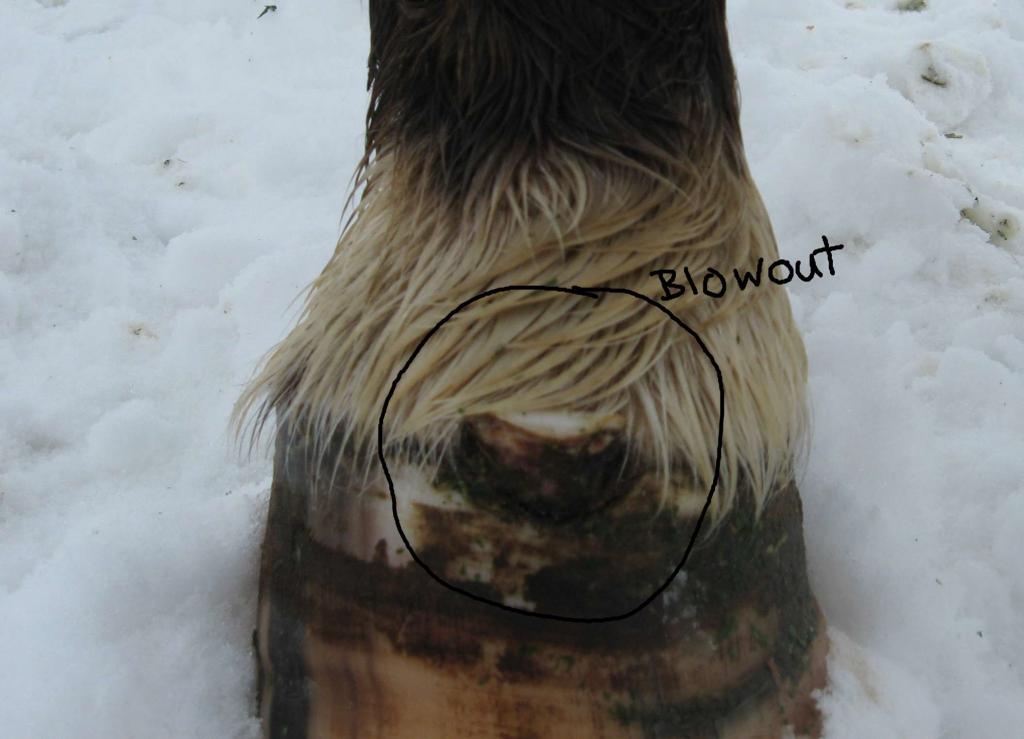 I was sure that once it grew down it would dry out and harden, no longer oozing. I kept a drying antiseptic powder on it. But at least once a week it would break open and crud would seep out of it. Injury or abscess, either way, it was a deep wound. Amazingly he wasn’t lame. The snow melted. The mud dried out. And it was time to start riding. The concussion from each ride would cause it to open and drain. It was probably best that it did drain out rather than build up pressure. It wasn’t infected or sore, it just needed to drain and clean its inner self out, and like most wounds it needed to heal from the inside out. I just kept treating it with a tea tree oil wash and adding antiseptic wound powder to scab it over.

It took nearly two months for it to stop breaking open and draining. I put Brass on a high Biotin supplement for hooves to try and speed up hoof growth plus give us healthier tissue. 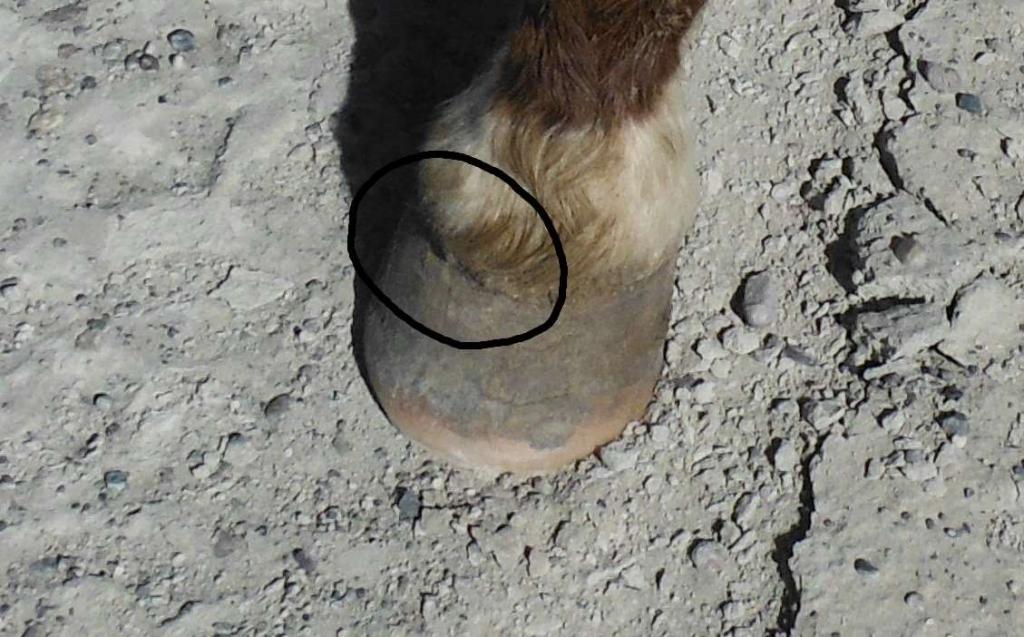 This is how it was looking 2 ½ months after injury. The injured area was remaining dry but I had a big lump on the hoof wall about the size of a dime. 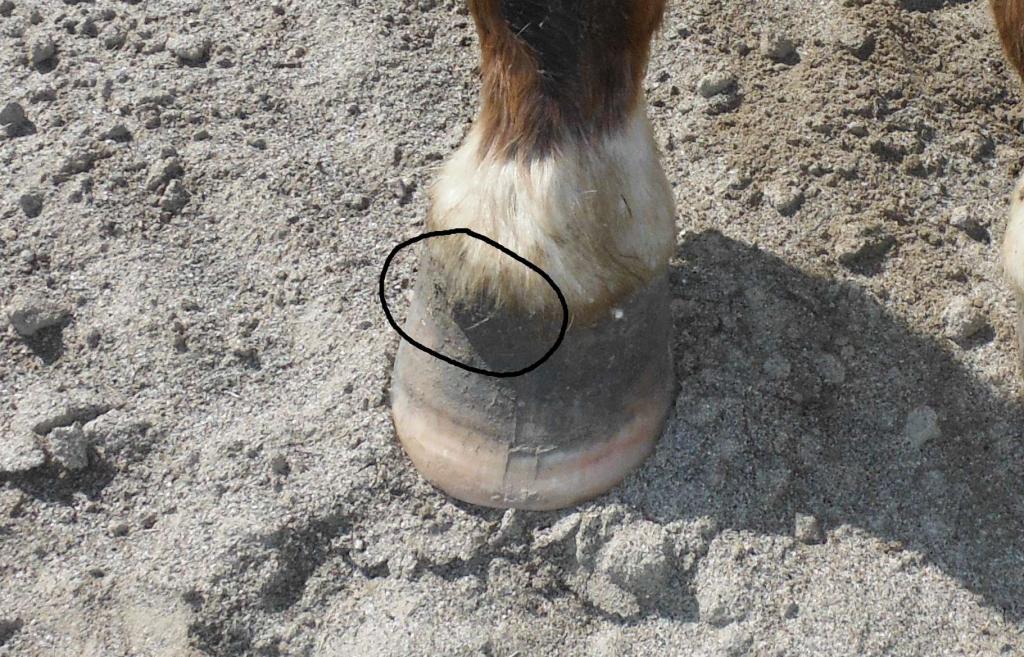 Here it is in mid-April, still a lump but growing farther down the hoof. This process was taking forever. 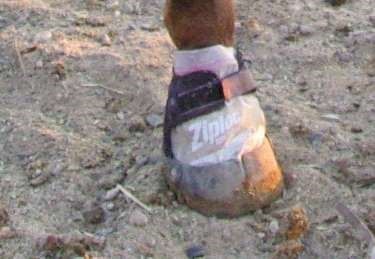 And it wasn’t long afterwards, mid-May, that he went lame again. I suspected another abscess as he had some hoof wall separation.  I mudded up the hoof with Sore-No-More clay, used a baggy over the hoof to hold it in place and put an Easyboot Glove over that. Within two days he was sound again. There was no blowout from the top so this one must have drained out the bottom. 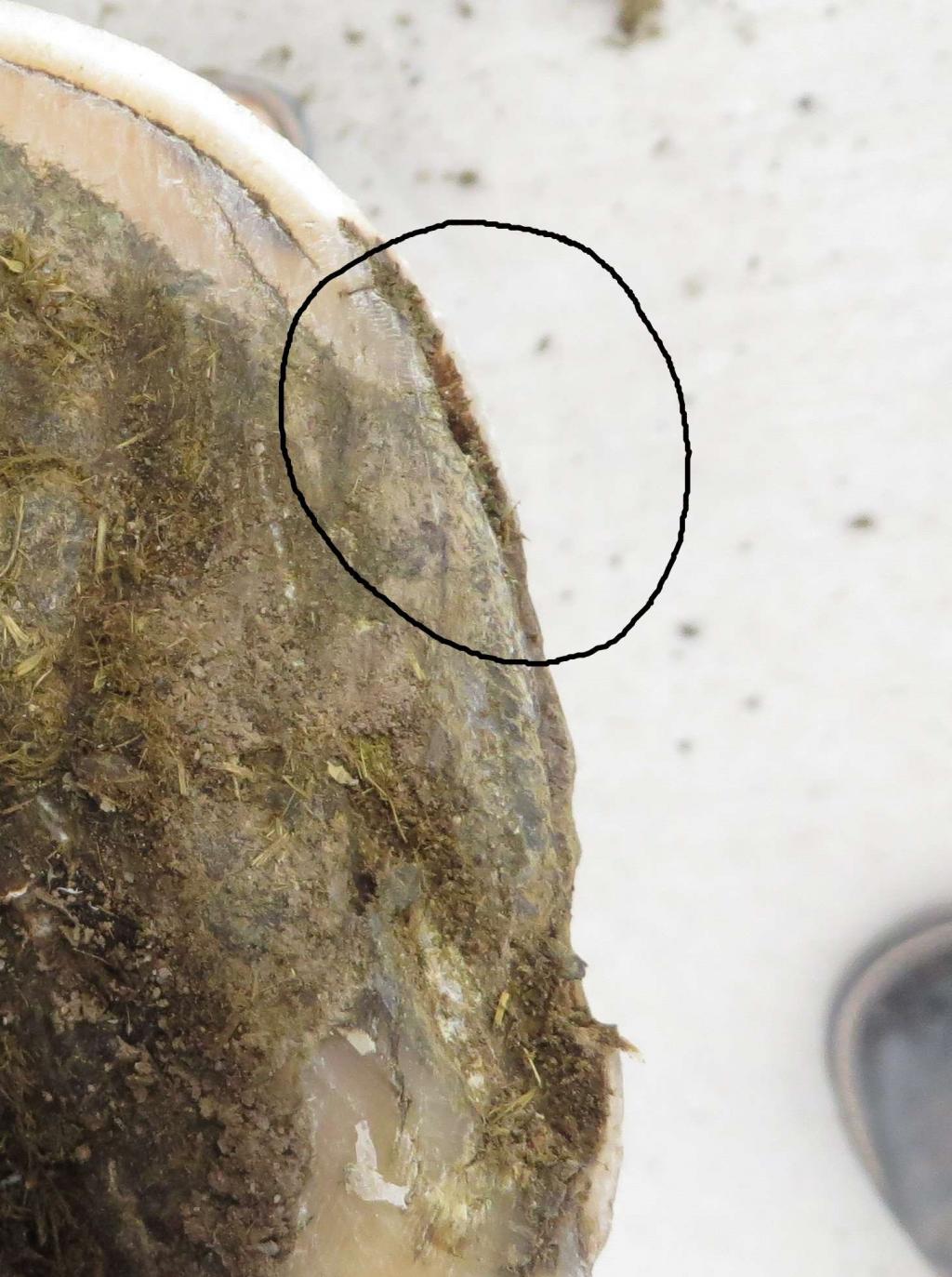 As seen in the photo there is a small whole where it probably drained out. The thin broken out hoof was another reason for the biotin supplement to improve and strengthen his hooves.  But the idea of taking him to an endurance ride the end of May was dashed. I had to be sure that he’d stay sound. I feared concussion over 50 miles of dirt and rocks could cause the hoof to begin hurting.

In late June was the Eagle Extreme 50 mile ride. He’d been sound with no apparent problems and I’d been riding him in either Gloves or Epics. Ted Nicholes had planned to ride Brass so we glued on some boots and he did just great for 50 miles! We should’ve photo’d the Glue On’s! 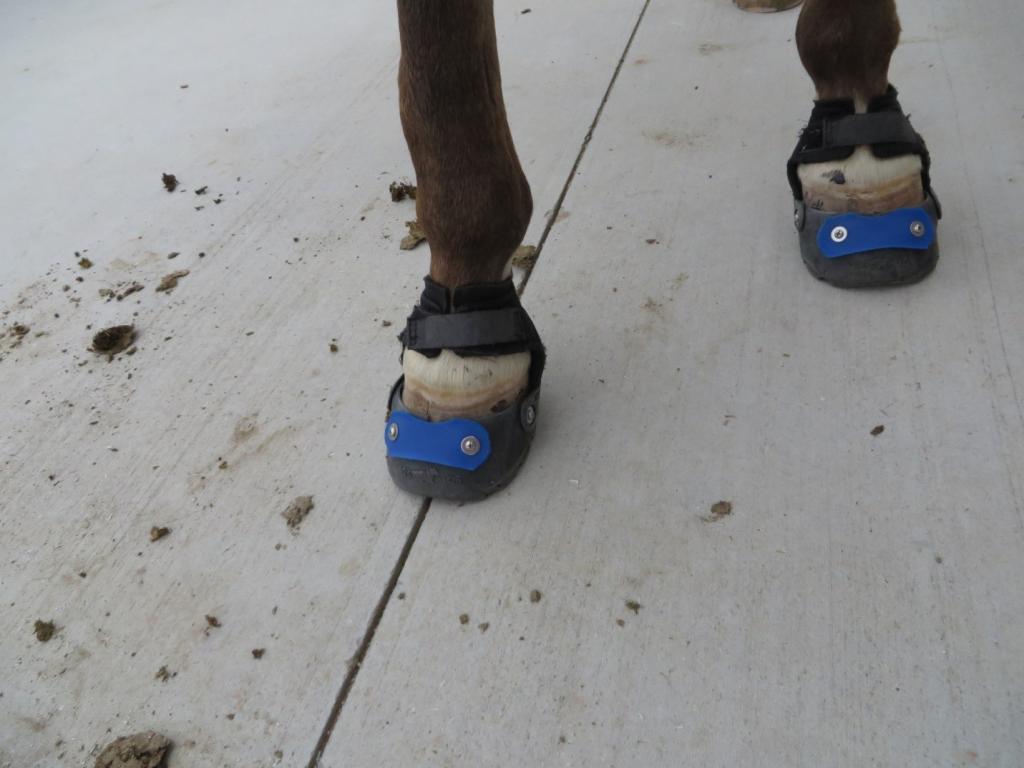 By July the nub left on his outer hoof wall had grown down far enough where it couldn’t be seen wearing gloves. I added power straps to pull the boot tighter over the knob so the Glove wouldn’t come off. This system works well for him and he went through another ride and completed in October. 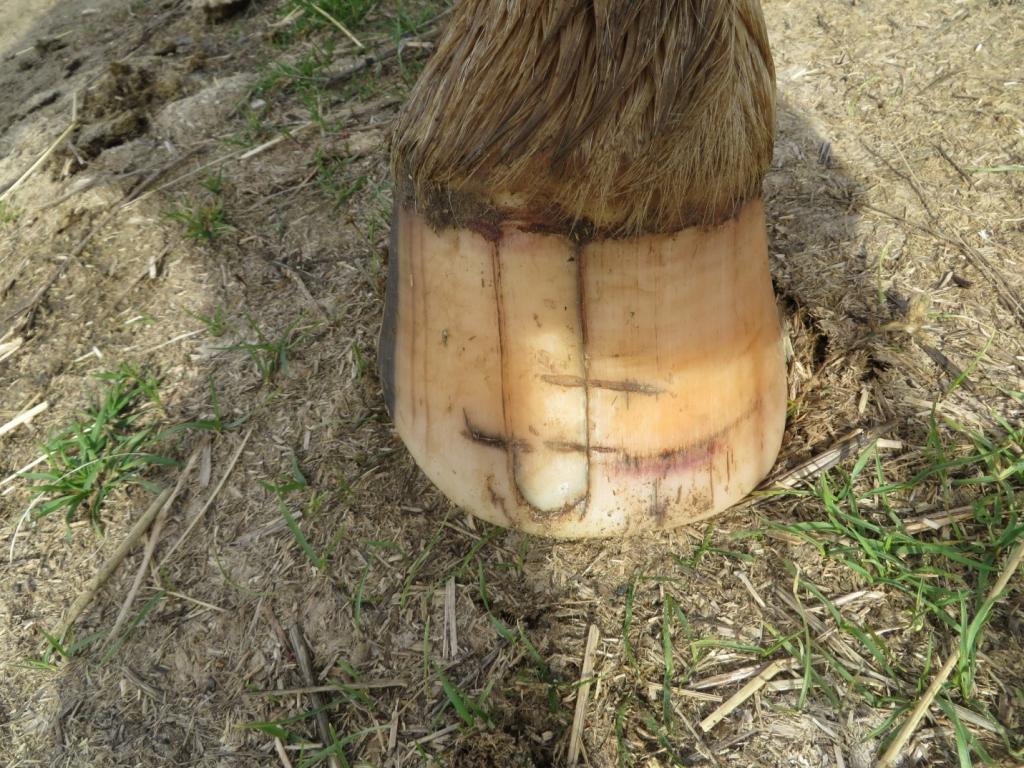 This is the same hoof a bit over a year after injury, Feb 10, 2015. You can see the U shape of the old blowout near the bottom of the hoof. It is almost grown out but not quite. On each side of the “smile” is a shallow crack that despite my efforts to stop it continues to grow upward. I haven’t decided exactly why but I believe it is because the wound created uneven pressure upon the hoof wall. Or it could be the edges of the wound have just weakened that area of hoof wall. Perhaps I need to notch the lower portion of the wall and unload it to get the crack to stop. But that’s another story. It will be another year before all these cracks and marks go away.