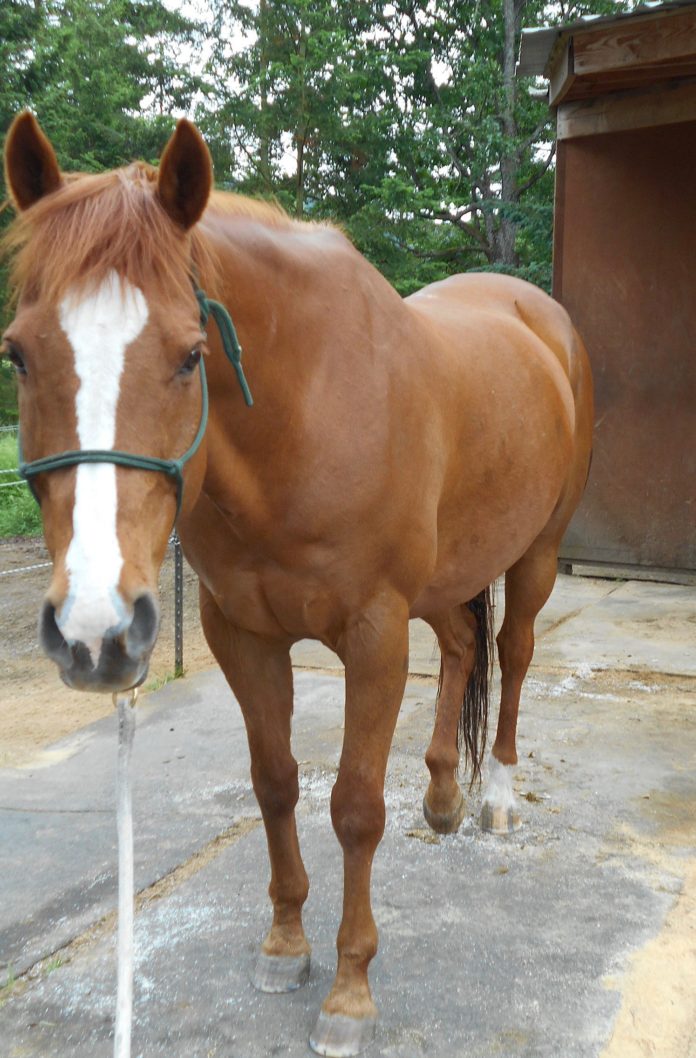 I work with a horse named Blaze, a magnificent 18 year-old copper Appendix Quarter Horse gelding. We have played big parts in each others lives over the past 10 years and more recently, EasyCare has played a major role. Blaze’s early life was tough. His dam was rescued from the Florida race track, and moved to Colorado. At age 4 he was “cowboyed” by a thoughtless trainer, sustaining lifetime lameness issues. His owner, Wendy, wanted to give him a better life, moved him to San Juan Island, WA, and began rehabbing his physical and emotional injuries. 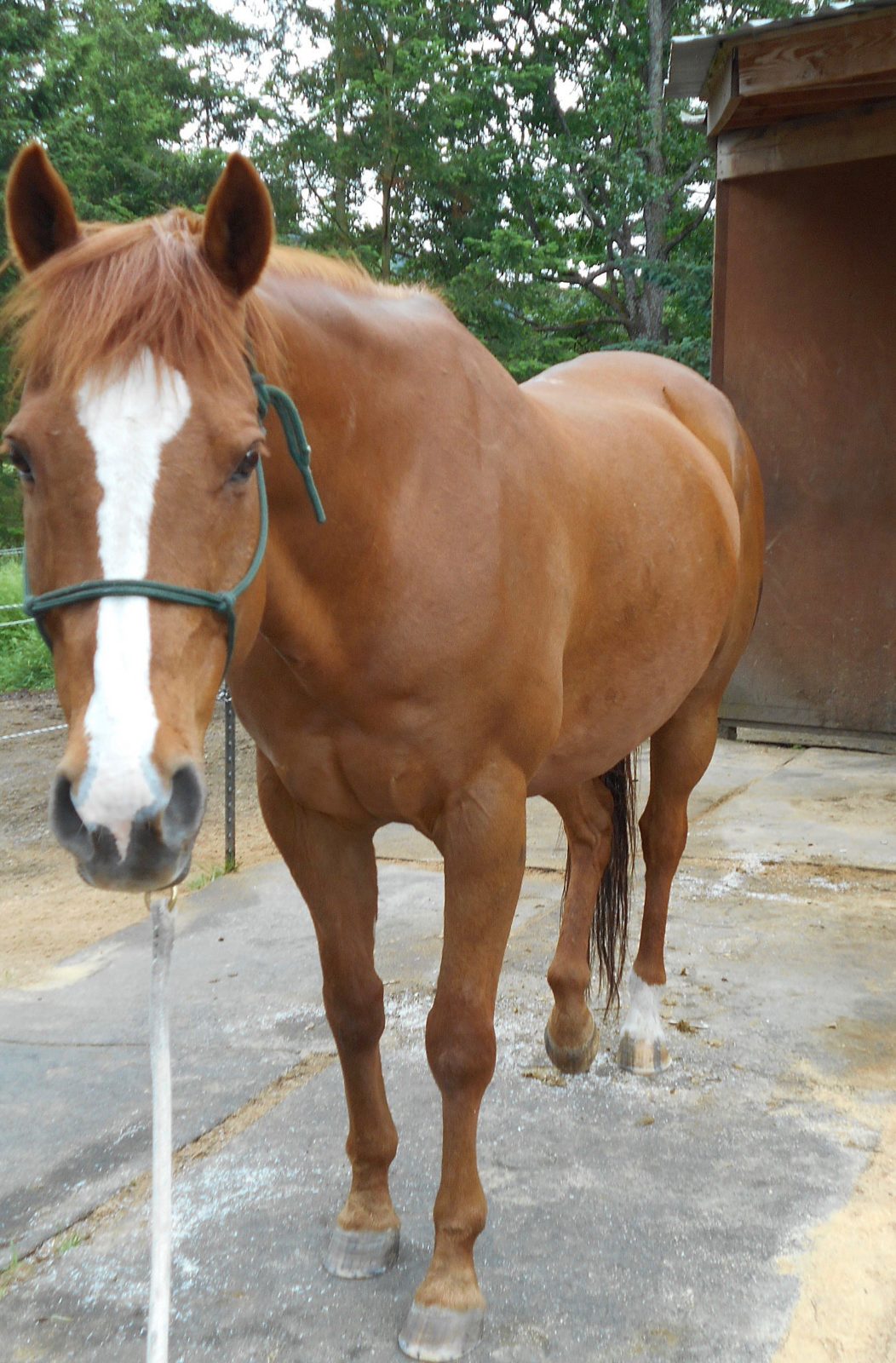 When I came into the picture, Blaze’s front-end lameness was evaluated by an equine locomotion specialist. In the process of relieving scarring from a Deep Digital Flexor Tendon (DDFT) injury, Blaze wore prescription padded aluminum Natural Balance shoes and reverse steel shoes to relieve pressure on his sore tendons. He was diagnosed with navicular changes as well. With thin soles and small feet he had difficulties on hard surfaces at anything faster than a walk. However, on a soft grass field he was a gymnastic prodigy. 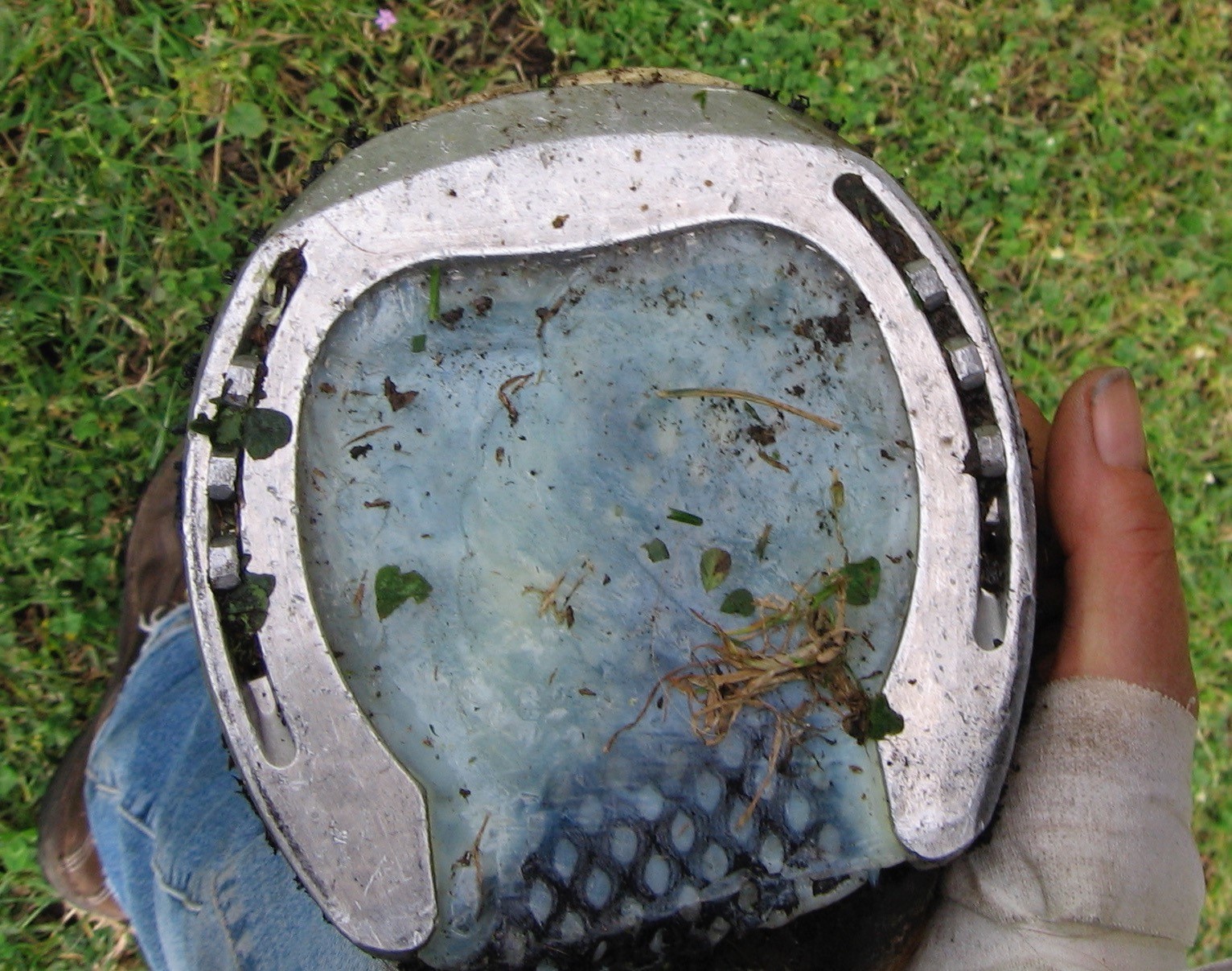 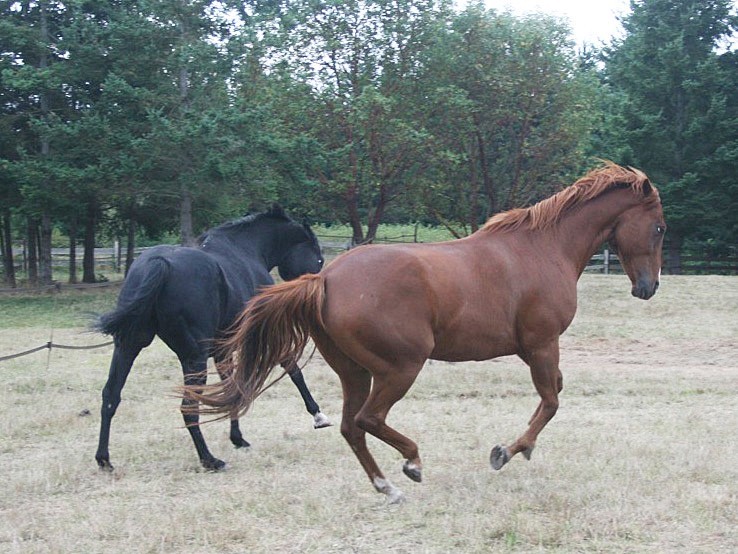 Blaze could be the unofficial poster horse for EasyCare products. Over the last 7 years, he tested, wore and wore out Bares, Edges, Trails and Back Country boots along with every type of pad combination. Blaze spent some time in Rx therapy boots to help him through an unexpected laminitis bout. His radiographs showed very thin soles and ultrasound pointed out scars on his DDFT. Despite a poor prognosis, we wanted Blaze landing flat and moving comfortably. We made some progress but despite diligent owner care, true soundness wasn’t happening. Then came the Easyboot Glue Ons and glue. Blaze’s open-minded vet agreed to my alternative strategy. 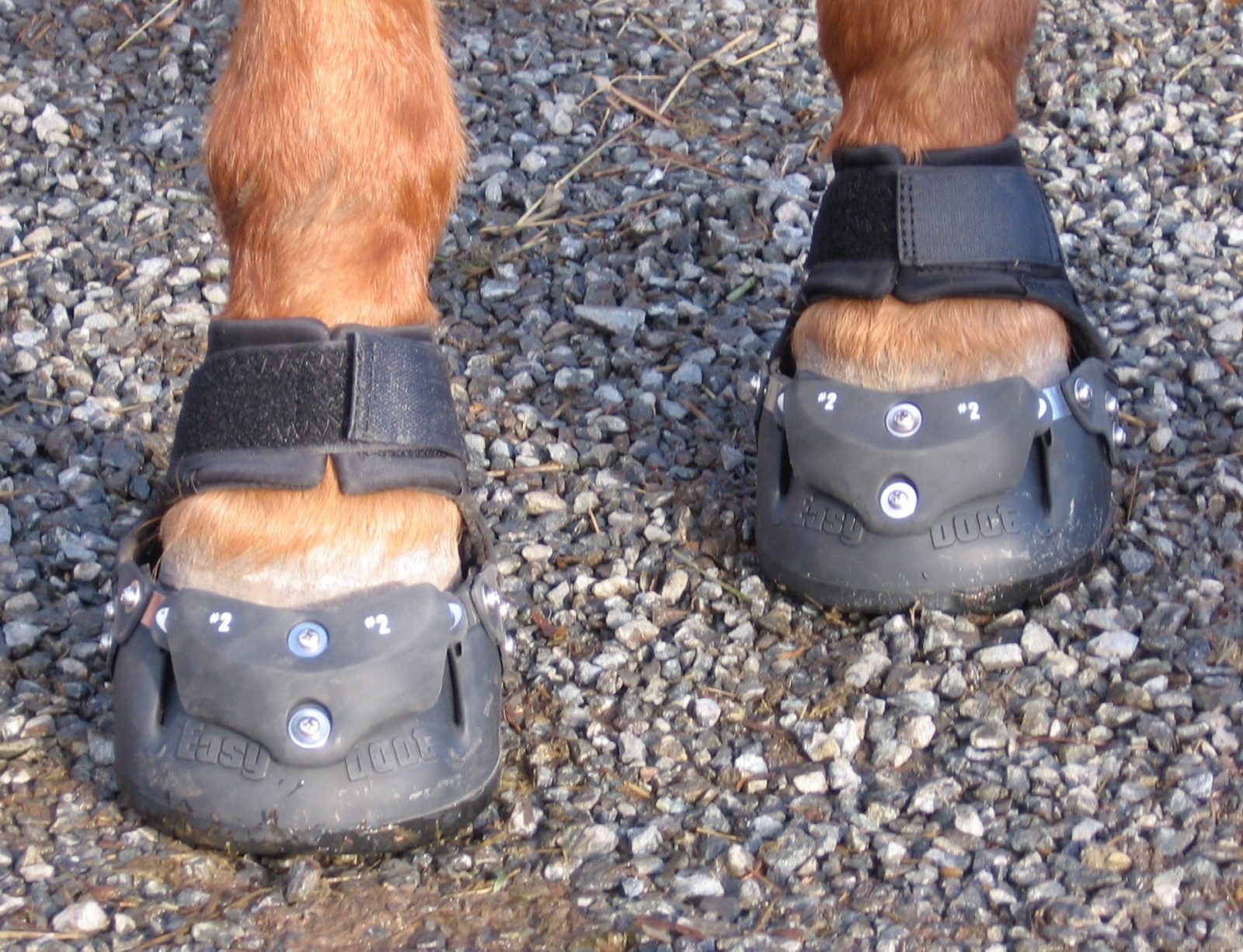 Blaze’s breakthrough came with several rounds of modified Glue On shells beginning in July 2015. This included an enhanced break over bevel added to the shells. In addition, we changed his diet to include balanced minerals and a targeted joint supplement. He got expert chiropractic attention to extend his range of motion. He could trot! He could buck and run! He could play “cutting horse” with his buddy across the fence and pull off a freshly glued shell! We were just happy Blaze felt his old self. 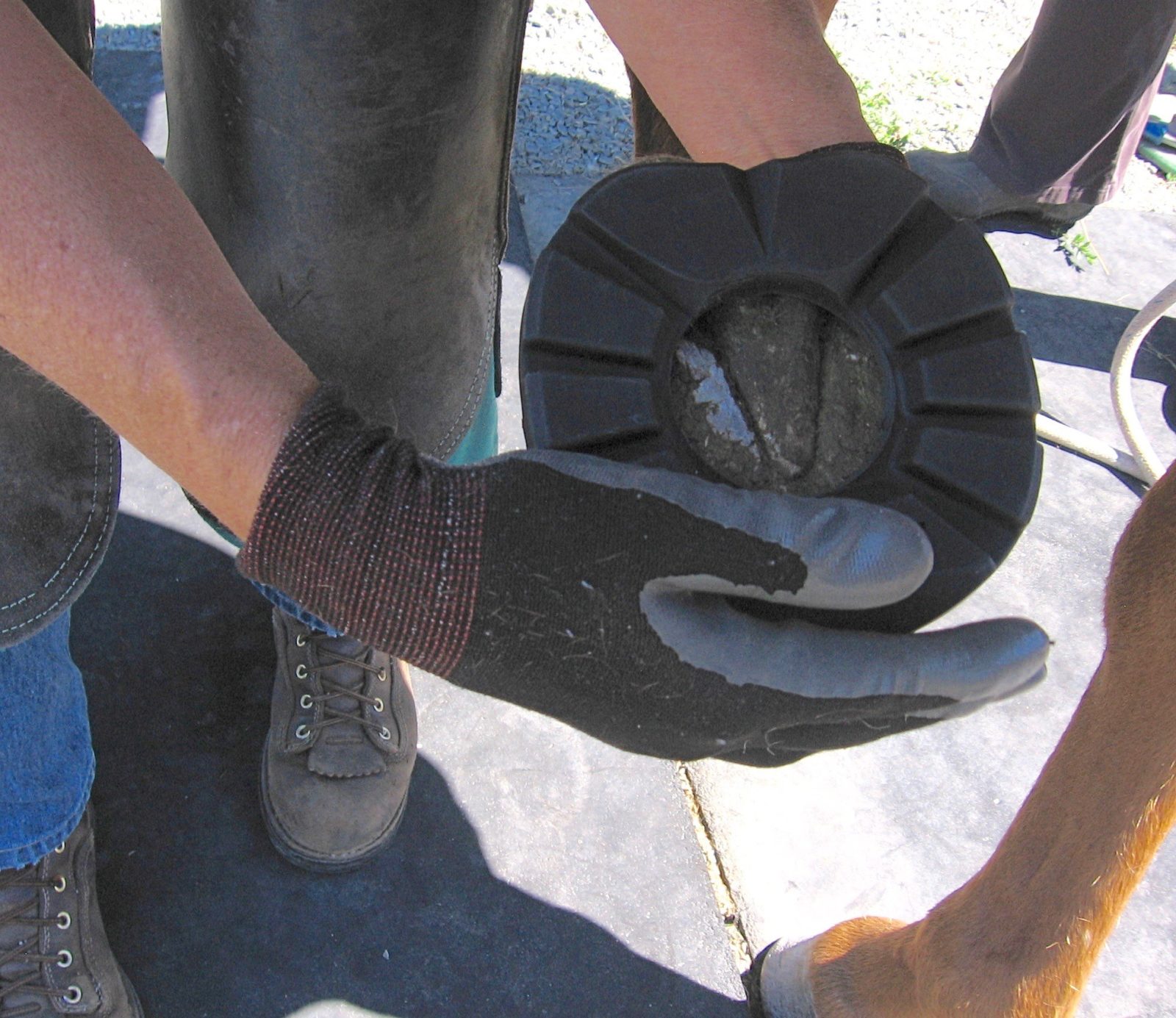 The Glue-on shell strategy along with the dietary changes and a summer of gentle restarting worked. Blaze’s next round of radiographs showed more sole, and it was dense, hard stuff. I transitioned Blaze to custom heat-fitted Easyboot Gloves for work so he could live bootless and bare but have perfect protection for light work. We had addressed the sole sensitivity for now, but Blaze’s next challenge was a bowed tendon and continued soreness from troubled soft tissue. An unscheduled nighttime romp did not help!

Were there any boots to get Blaze comfortable? Yes. Easyboot Clouds had just debuted, but they were in short supply. We compromised with Easyboot Zip boots and Cloud pads. Wendy religiously cleaned, powdered and changed his boots daily so he could keep moving. When Clouds became available Blaze’s footwear closet expanded to hold a pair, a spare pair and a stack of new Cloud pads. If a horse could smile, it would be when those Clouds go on! 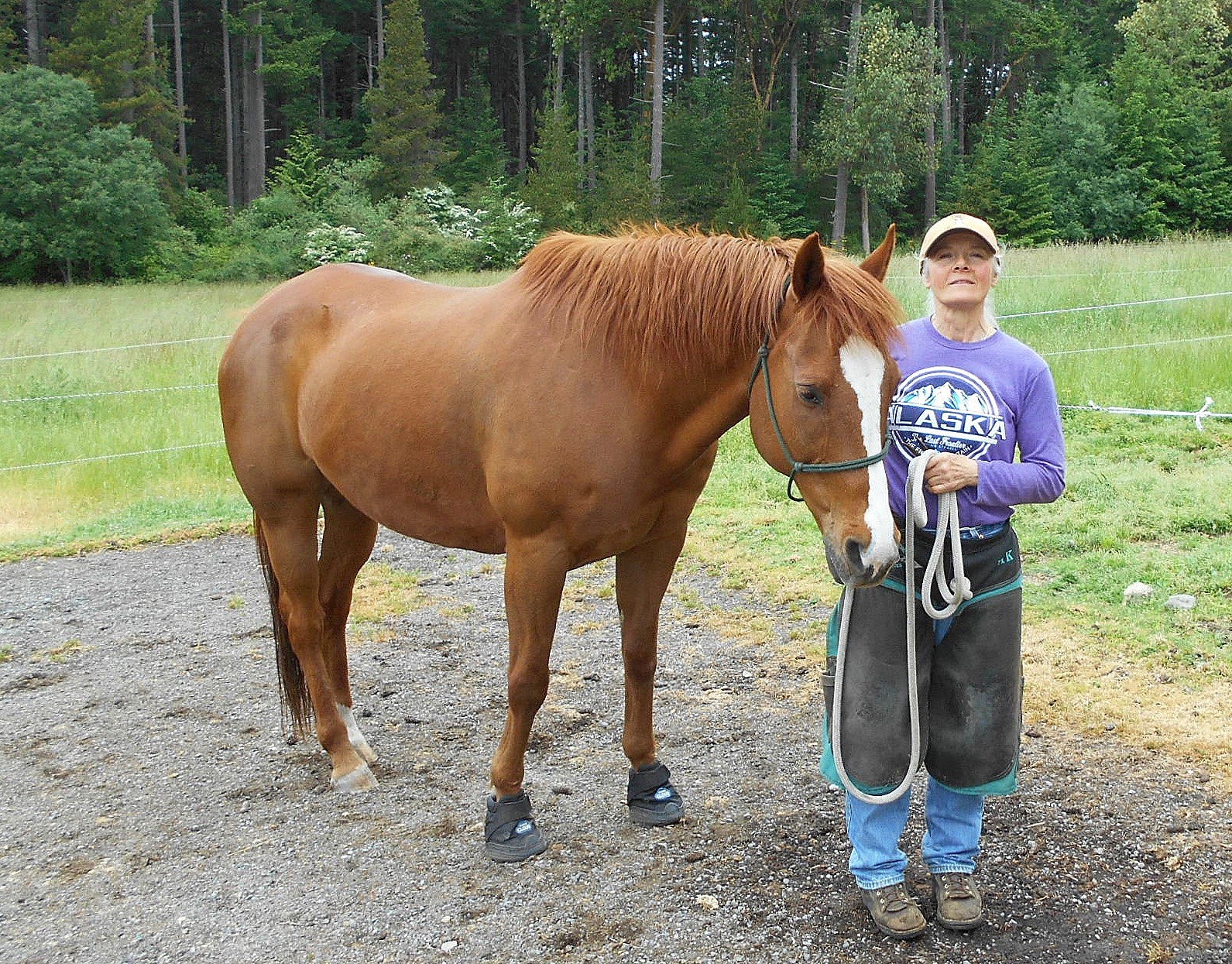 Today, Blaze enjoys partial retirement with a small herd of geldings managed with natural horse keeping practices. Wendy likes to tell me, “You and EasyCare boots saved my horse,” but I remind her she and Blaze did all the hard work. Whatever comes next, Blaze has the hoof wear, the fortitude and his dedicated partner Wendy to see him through.