The equine industry needs more certification classes where people can learn how to be a good barefoot trimmer.  I continue to hear great things about a course offered in Australia.  Here is a blurb about the course. 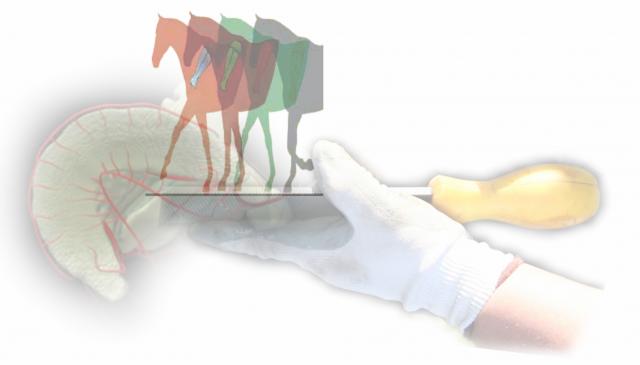 The new Diploma of Equine Podiotherapy course for 2009 commenced in October. The first block of practical lessons was held at Mayfield Barehoof Centre last month. Everyone had a great time and from the trimming skills already being displayed I am sure that there are going to be some fantastic Equine Podiotherapists ready to take their place as professionals in twelve months time. 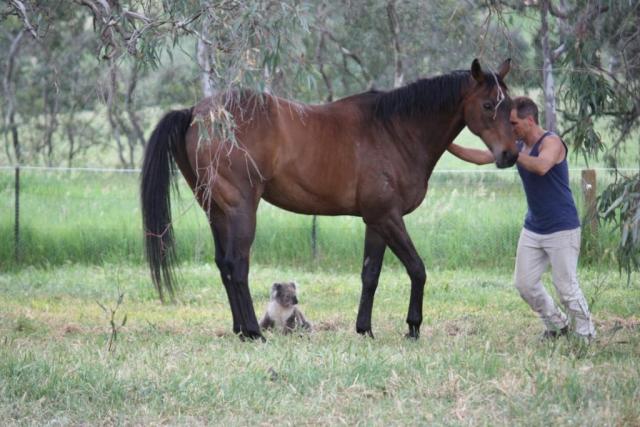 The course is run in a rural area of Victoria and students were treated to a meeting with one of the koalas that live on the property of Andrew and Nicole Bowe where the teaching facilities are based. The pictures were snapped by vet Alina Luff who is part of the class. Alina was taking pictures of one of the rehab horse’s hooves at the time when this little fellow strolled through the pasture where the more advanced rehab. cases live. Andrew Bowe whose Koala whispering failed him that time, had to carefully move one of the inquisitive rehab horses sideways off the koala who thought that the best place to hide from us was under this big brown “horse tree”! 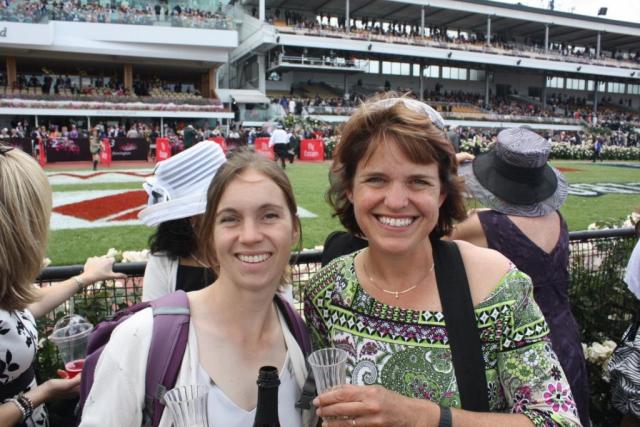 As the Melbourne Cup was held the day after the first block of lessons finished. Two of the students who travelled from Western Australia thought it would be a great chance to see the cup before catching a flight home. Tanja Hanish and Alina Luff pictured below having a great day. Alina said that it was very interesting and all in the name of furthering their knowledge as they spent a good deal of time discussing the hooves of the top horses! Donkeys Part of the training of an Equine Podiotherapist is learning to deal with donkey hooves. Donkeys are often kept as companion animals but sadly they don’t seem to get the regular hoof trimming they require, nor do they often get proper education so they can be a quite a challenge to trim.

Rob Little is one of the EPT group and although he has been trimming semi professionally for a while, he has not had to tackle “the donkey” up till now. I spotted his email posted to the Podiotherapy students and asked him if I could share it in our newsletter. I love Rob’s colourful way of writing and thought it was a great representation of the huge spectrum of cases that professional trimmers may meet.

Hi everyone, thanks for your responses on my posting of the donkey I now have further fuel for the fire………  Today I visited an elderly gentleman who looked like the old ultra marathon runner Cliff Young who had a (wait for it) a DONKEY that he was worried about.  He explained to me as we drove over a hill that the plan was that he would distract the donkey with a piece of bread and then cuddle the donkey (which I found out was a headlock) while from a distance I was to approach with a hidden halter slip it over his head and bobs your uncle feet done, happy donkey.  All of this was going fine with my new found ultra marathon look alike friend cuddling the donkey and me approaching as if I was taking a walk in the park until……………….. the donkey sees the halter. The

donkey (who had terribly bad feet) took off with my new friend still cuddling, down a hill at a speed and  agility resembling that of an African gazelle, taking out small and large trees as it went.  As I watched the donkey and my new friend disappear into the distance cuddling one another I couldn’t help marvel at 2 totally different things.

1. How the hell does a donkey that had flippers for feet move like that.

2. Why the hell did my new friend not let go!

Anyway the donkey unfortunately never got trimmed, and my new friend only suffered superficial cuts. I know this is a serious chat site so I shall desist with my donkey bashing and only post relative and insightful commentary from now on.

-This is Rob signing off. 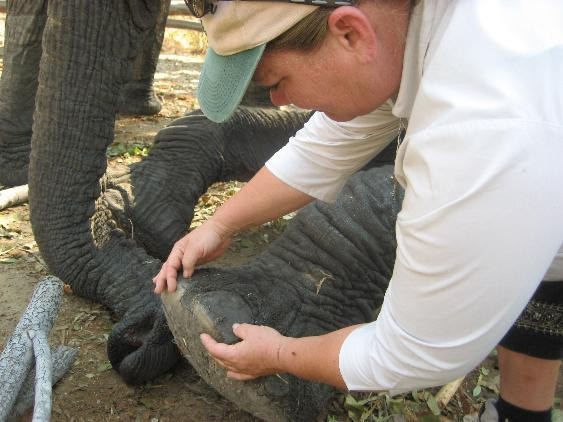 While we are speaking of being asked to do the out of the ordinary …..one of the first group of EPT students from two years ago, Yvonne Taylor from WA has just returned from a trip to Africa where she as asked to deliver workshops to train farriers in natural hoof care practices. She was also asked by her hosts to assist one of their other animals. She explained it was a little outside her training but because there was no one else around with a file, and Yvonne not being one to shy away from helping a creature in need, she did just that!