Barefoot horse, Timothy, at 31 years of age can attest that one is never too old to go barefoot and booted.

Timothy wore horseshoes all his life until last year. Diana Thompson tried taking him barefoot several times, but he became sore and she was forced to re-shoe him. In horse shoes, he had significant reverse palmer angles on his hinds; his soles were flat and walls were thin.

Last year Diana asked Linda Cowles to pull his shoes. Because his paddock terrain is extremely abrasive and his hind end was very sensitive (a result of the imbalance caused by his reverse palmer angles), they tried an assortment of protective hoof boots (Easyboot Rx, Old Macs and Easyboot Gloves) to keep him comfortable in his paddock. He was frequently barefoot in pasture. His walls and soles thickened up and grew dense in his first 3 months barefoot, and they were able to rebalanced the negative palmer angles so they are normal now for the first time in 20+ years).

This spring, while Diana erected her new covered arena over Tim’s usual day-time turn-out area, and he was restricted to his abrasive turnout paddock full time. He moved best in the Easyboot Gloves, but using them full time chaffed his heels, so Linda and Diana decided to try using Goober Glue to apply the Easyboot Glue-Ons to all four feet. He wore these glue-Ons almost non-stop for the 3+ month period of arena construction. Linda felt casting would have perhaps been best, but Diana was so impressed with how he moved in the Gloves, that they agreed to try full time Glue-On booting. It worked beautifully.

Timothy isn’t a typical 31 year old horse; he was notoriously athletic in his prime, and he still looks like a champion ready for the track or three day event course when he has a major frolic. He rips around the pasture at top speed, throwing in a bucking spree or roll-back on the fence for emphasis. In spite of his buoyant attitude, Tim’s Easyboot Glue-Ons stayed tight for 4 to 5 weeks at a time. Using Goober Glue they were able to easily clean up his shells and re-use them for the whole period. Needless to say the Glue-Ons are worn out at this point.

When the shells were pulled for a re-trim, his hoof condition was great. The wall and sole was a bit softer than normal until it dried out (3 or 4 hours), so occasionally the horse’s boots were left off for a few days before re-gluing them. There were no problems resulting from having full time Glue-On boots on. His wall growth continued to be dense and thick, as it had been since pulling his shoes, and we never had a problem with thrush. When the shells came off, his frogs and sole were covered by a thick film of shedding keratin. Linda used a wire brush, hoof knife and pick to clean up the frog and sole, and he was ready for rebooting. There was no need to use any sole pack or thrush treatment and had great results.

Linda doesn’t encourage this sort of long term booting with Glue-Ons under normal conditions, but for this sort of rehab situation, she was delighted with the results. This was a great temporary solution that was economical, and easy to apply.

Linda Cowles is a natural hoof care provider and EasyCare dealer in Santa Rosa, CA.  Linda was also recently featured as EasyCare’ dealer of the month for August. Thank you Linda for the feedback and this great story!

EasyCare recommends that Easyboot Glue-Ons used for a time period greater than 10 consecutive days be done at your own discretion or the discretion of your natural hoof care provider. 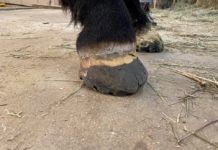 Creating a Wedge with the EasyShoe Versa