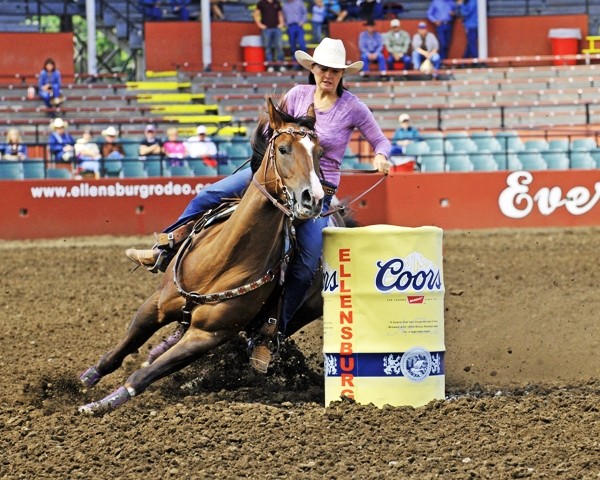 If you are a rodeo fan you know there is no better place to be in December than Las Vegas! The WNFR or Wrangler National Finals Rodeo draws over 200,000 people and is the largest single event held in the city of lights. Not only is the WNFR the Super Bowl of rodeo, the 2009 finals proved to be extra special for all of us who are barefoot horse fans. Prior to the event there was some major hubbub that WNFR qualifier Jordon Peterson was planning to make her runs on her awesome horse Jester barefoot. This was exciting news! I was determined to find out if this really was true but connecting with Jordon proved to be a challenge. I put out an APB for help and EasyCare dealer and hoof care practitioner Johnny Holder of Weatherford, TX said he thought he could track her down and track her down he did!

Johnny happens to also have a pretty impressive clientele of barrel racers himself and we featured his wife Liz in our 2009 catalog running her horse in Easyboot Grips.

Johnny sat down with Jordon a few months after the finals for a quick interview and verified what we all hopped was true. Jordon and her great horse Frenchmans Jester, AKA Jester, did in fact compete in all ten rounds barefoot and they are the first EVER to do so! Jordon and Jester won the sixth round and placed in four other rounds. Their time of 13.72 in the sixth round tied for the fourth fastest time clocked during the grueling ten day event.  The dynamic duo wrapped up their year finishing sixth in the WPRA world standings.

As you can imagine this has caused quite a stir in the barrel racing community. Reading some of the barrel chat sites one would think you were on a barefoot chat!.  Many of these ladies have really done their homework, from transitioning in hoof boots to pea gravel in pens. With Jordon’s success, not to mention her four-time world champion mother, Kristy Peterson’s barefoot successes; many barrel horses these days are going bare.

Get the whole story in Johnny’s article along with Jordon’s thoughts on natural horse care in the next issue of The Horse’s Hoof. Congratulations Jordon and Jester and hats off to this amazing team for setting a great example and breaking the ice in the sport of professional barrel racing!