I went to Wikipedia to see what was there pertaining to the barefoot hoof and this is what I found that was very fascinating……..

Horses were used for work and pleasure by man for thousands of years prior to the invention of horse shoes. Some of the oldest writings about the care of hooves are found in the works of Xenophon, a fourth century BC Greek cavalry commander, who wrote “naturally sound hooves get spoiled in most stalls,” and included the instruction that their hooves should be toughened by putting a cobblestone area in their paddock, (a practice still in use today). The Ancient Greeks did not shoe their horses and Xenophon wrote of measures to strengthen horses’ feet in his classic work on horsemanship:

“ To secure the best type of stable-yard, and with a view to strengthening the horse’s feet, I would suggest to take and throw down loosely four or five waggon loads of pebbles, each as large as can be grasped in the hand, and about a pound in weight; the whole to be fenced round with a skirting of iron to prevent scattering. The mere standing on these will come to precisely the same thing as if for a certain portion of the day the horse were, off and on, stepping along a stony road; whilst being curried or when fidgeted by flies he will be forced to use his hoofs just as much as if he were walking. Nor is it the hoofs merely, but a surface so strewn with stones will tend to harden the frog of the foot also.”

His theory about the barefoot hoof needing to be on pebbles is the same as today and how using pea gravel assists the horse with natural hoof trimming on it’s own! It is so great to know that pebbles back then, are what we do now with pea gravel for natural horse care.

There is even some info about transitioning to barefoot and a picture of Easyboots for horses on the page. 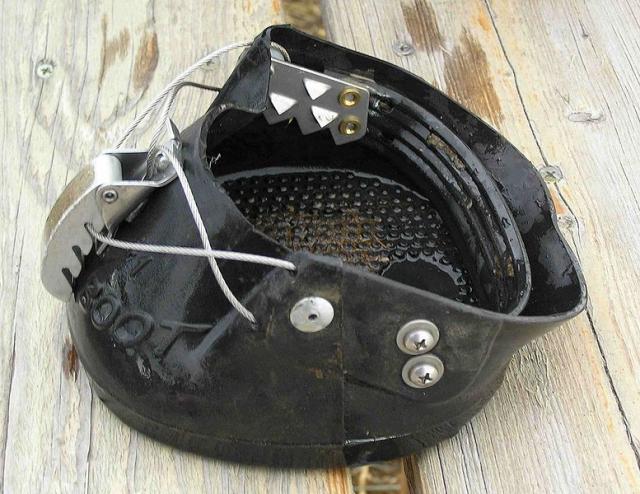