After a down period during the winter when we went in Florida for two rides:

– Goethe 75 using gloves(slightly off going out on the last loop but fine the very next day)
– Gator Run 50, put on the Gloves the night prior, Twist was uncomfortable in the morning, so I did not start the ride. 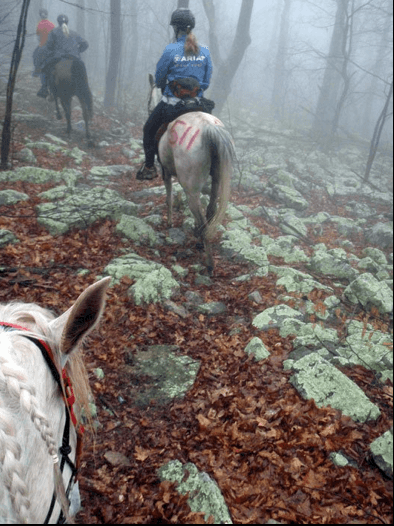 I was very disappointed and not feel very positive for the future; very doubtful of my horse, of her feet, of the boots. When everything goes right you don’t analyze too much (hmm, I guess I do). But when everything goes bad, you start to look at every little detail.

Anyway, I measured her feet and suprise! Her feet had grown one size since last year, so voila for the “Did Not Start” at Gator, could you imagine spending the night in shoes that are one size smaller than your feet and then go for a run? Ouch! So new boots arrived, the weather finally let us do some conditioning but not a whole lot.

I had entered Twist in The Rabbit Run 50 in March but decided to back down to the 30, it’s only her 2nd season, and I had planned to enter the Old Dominion No Frills 55 two weeks later.

So my plan was to use Rabbit Run to tune up Twist (in Glue-Ons) for the OD No Frills. Keeping our pace and ride with negative splits (last loop faster than the 1st one). My plan worked since we finished 1st (granted a few riders got lost, but hey, it’s part of the game) and she looked like she was ready for more at the end.

So this weekend we went to OD No frills, and the least I can say is we had thrills! My mare was great, the Glue-Ons rocked the very muddy, slippery, rocky trails!

We finished 9th in 5 hours and 11 minutes: very fast ride. My mare was on top of her game, wanted to canter the whole thing, even through the rocks. I did not let her as I thought we were going to die! But I let her pick her pace on the stretches with nice footing as long as she was relaxed, not pulling and slowed down when I asked her.

What a fun day it was, the boots stayed on perfectly! I have yet to put them on myself, it’s my trimmer who really is a farrier with an open mind who glued them on for me.

So we are back on track! I think doubting, questioning yourself and your horse is a sane part of our sport and glitches humbled us (riders). But keep your spirits up as there is always another ride, take care of your issues as there is only one horse.

Photo credit: Dawn Engle (who I tied with and whose horse, Wirtual Dreams, got BC and high Vet Score!)