I have been meaning to try out the Glove Back Country boots for a while now. I had a pair of size one boots for my mare’s front feet, then she pulled a muscle about 4 weeks ago at the last endurance ride and needed some time off. I did toss them on the hind feet of one of my geldings, and they performed really well on a 7 hour ride, during which we crossed a river and went up and down a trail that goes from 2,600′ to 5,800′ in about 4 miles. So plenty of steep to trial them. But he generally does well with his boot retention, so it wasn’t a super test. My mare, particularly on her hind feet, tosses or at the minimum twists, her hind boots all the time. Even with athletic tape, sometimes we lose them, particularly after water crossings. They fit well and as I am a professional barefoot trimmer, and the trim is about as good as it can get for her conformation. But her conformation and movement cause us problems at times. While she was convalescing, I also ordered a set of hind boots in size 0. So we were all set to go for a test ride.

I ride endurance, and up until a few years ago, I was sponsoring a junior at some rides. We had a ton of fun and would go trail riding together at home and kept our horses in the same pasture. She then went off to college, and now just has time to play with ponies on her summer break back home. Her mare has great feet and is usually bare as well, though will occasionally get shoes slapped on. Today she borrowed a pair of my Epics for her mare’s front feet, as there are old gravel based roads on some of our trails.

We decided to go to the local city park, Arcata Community Forest. This is a multi-use parks (hikers, bikers, equestrians) and with year round good footing on the gravel based trails and roads: important when you live where it is rainy 8 months of the year, and foggy the other 4. There are lots of good hills, but as a central location (10-30 minutes from most places around here, depending on where you live/board), it is the go-to place for the local endurance crowd. Some trail riders also frequent it, but 8 out of 10 rigs on at any given time would belong to an endurance riders. Most of our costal soft-footers do need boots here, though, so I figured it would be a great day to test out the Back Country boots and see how much conditioning my chubby pony had lost in 6 weeks of no riding. 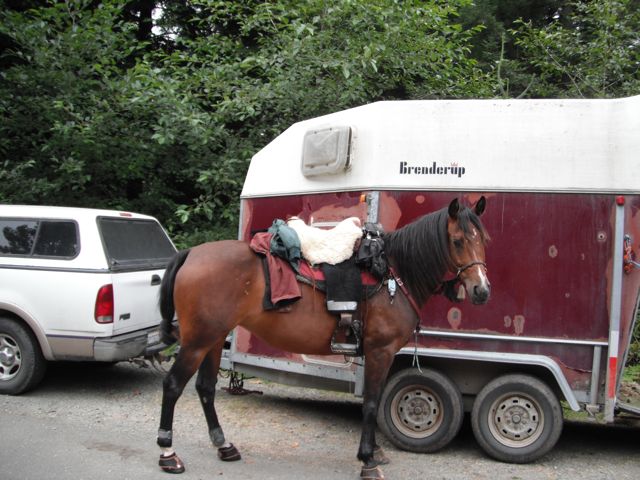 All tacked up and ready to go. The Glove Back Country boots are a great fit. Ignore the ‘patchy’ (I call her Patches too) trailer: sound as can be, but a bit ugly. No-one would dare steal it though. One day I will sandblast and repaint her, but for now, she remains Patches. Look at that belly on the pony – the girth had to be let out a hole or two. 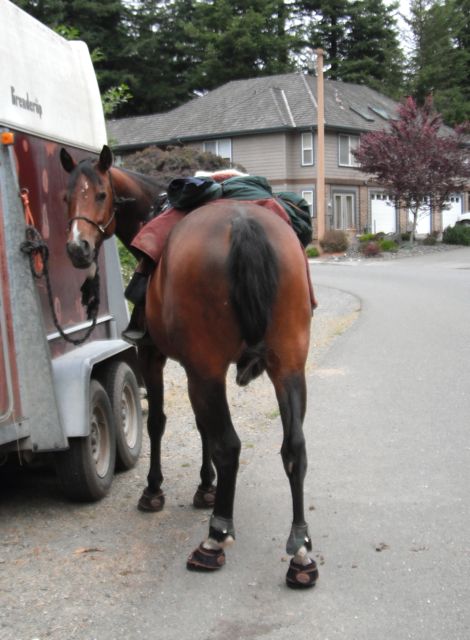 “Do these boots make y butt look big?” Nope, that would be you alone. Nice snug fit on the Glove Back Country boots. Will they rub those pretty white pasterns? 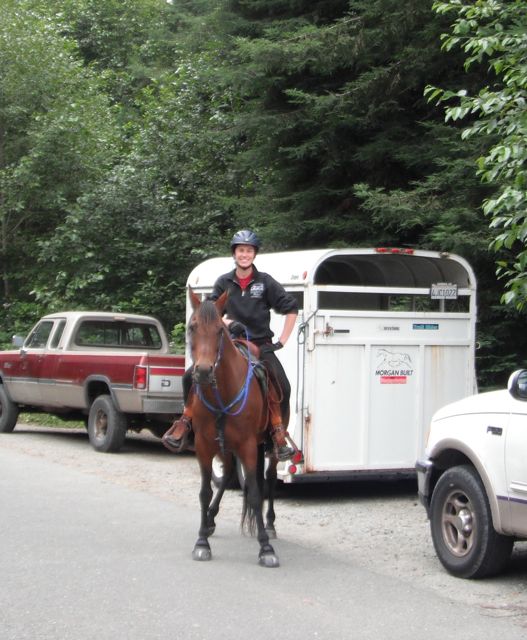 Morgan on her mare Choco, in Epics. Well, technically they are Bares that I put buckles on. I love the thick, long lasting, and protective sole of the Bare tread for Eowyn on hard gravel/rock endurance rides, but like the ease of use of a cable/buckle system on the Epic. So I convert Bares into Epics. Choco did great in them and felt comfy all day. 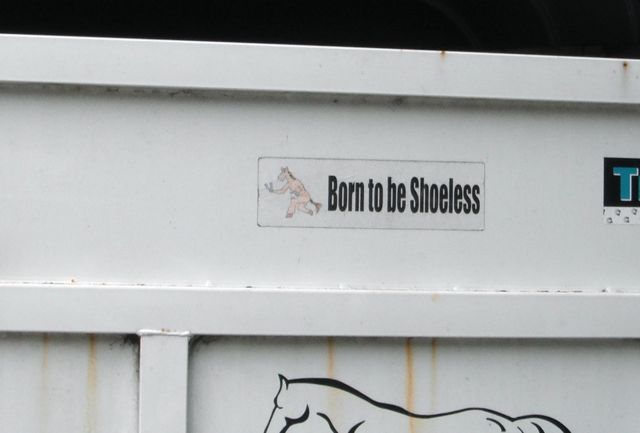 That trailer behind Morgan? I didn’t recognize it. But I did love the sticker on it. I want that sticker! 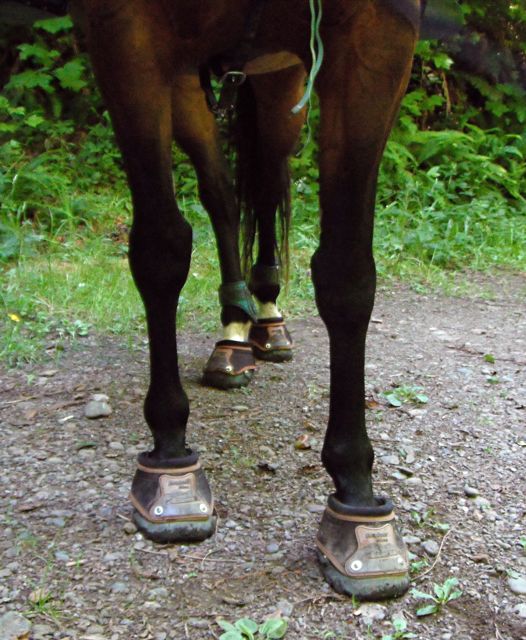 After a little warmup walk, we did some good trotting and a mix of walk, trot, canter up what we call training hill – oh, and some “I want to run” gallops uphill. Great fun, but almost always guaranteed to spin Eow’s boots or even send the rear ones flying, if not sports taped up. As you can see, the Glove Back Country boots are still on square and centered as can be. 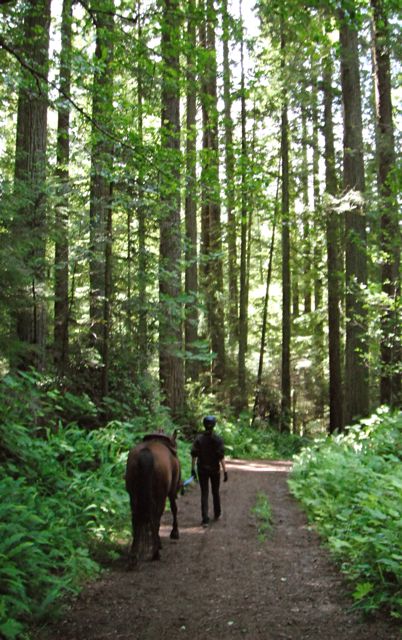 After going all the way up the long training hill, we usually hop off and lead back down and to the split off for another trail. This gives the ponies a chance to recover and drop their heart rates, and we can stretch our knees. Arcata Forest is mostly third growth and some second growth Redwood. A few old growths still stand in some areas of the park, but mostly it was logged pretty clean many decades ago. Now, it is run under a well thought-out timber harvest plan that is being used as model for sustainable logging. It seems to work well, and we have a great place to ride. 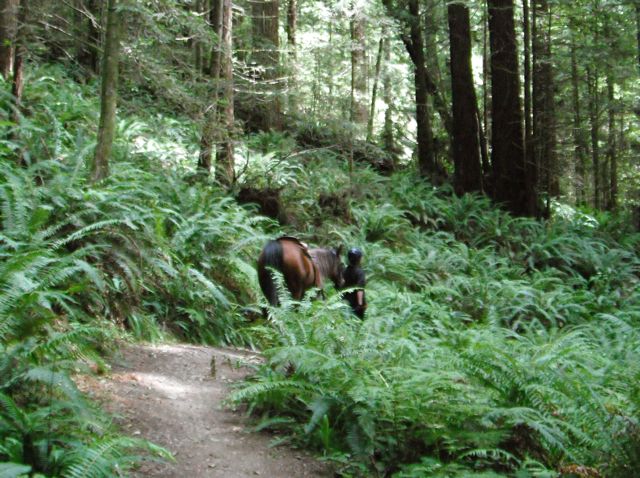 Ferns of many kinds abound here. You often feel like you are riding through some lost forest in a fantasy novel. 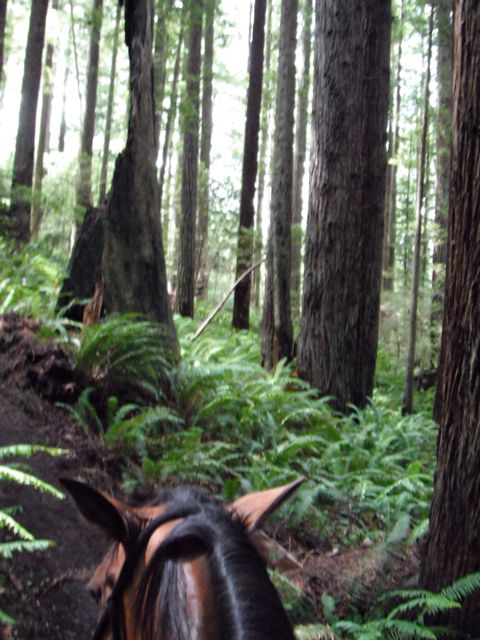 The park trails are mostly 2 miles or less long, but tie into each other, so you can get some nice loops going if you want. If you only have time for a one hour ride, that is fine, or you can be there for 3 hours and still have fun. It is also great ‘spook training’ for your horse, particularly on summer weekends. Arcata Forest sits behind Humboldt State University and you will have runners, hikers with packs, moms with strollers, running children, loose and barking dogs, mountain bikes zipping behind or towards you, and sometimes the whole track team goes jogging by, or the biology or forestry classes are ‘hiding’ in the woods in bright clothes, rustling around the bushes. Sometimes you encounter logging trucks and equipment, big pipes to make drainage areas, and there are a ton of bridges, puddles, and mud crossings all over as well. If you want to have a steady horse, bring it here and it will get steady. We pony all the youngsters here, and the oldsters have no issues with most things they run into on the endurance trail, after a lot of riding here. Yet the park never feels crowded, and often during the week is a fairly quiet place to ride. 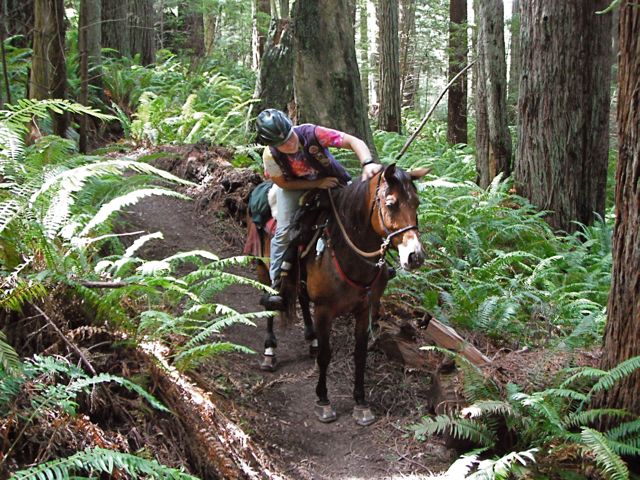 Good Pony! At 7 years old, she is finally becoming a fun horse to ride. It wasn’t always so, and at times I was terrified of her and ready to sell her. Now, I am even thinking Tevis could be in the stars next year, or the year after. She has matured so much in the last year. 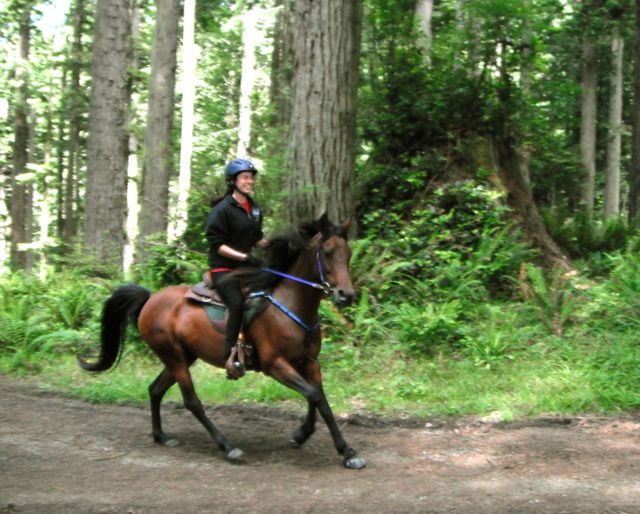 Morgan having fun. Choco is another one of those opinionated, bay mares. There were times of frustration with those two, as well. But at 18, she has sure mellowed out, mentally at least. She still can go, go go and you’d never guess her age watching her. And she still has a spook on her, that would unseat many a less balanced rider than Morgan. 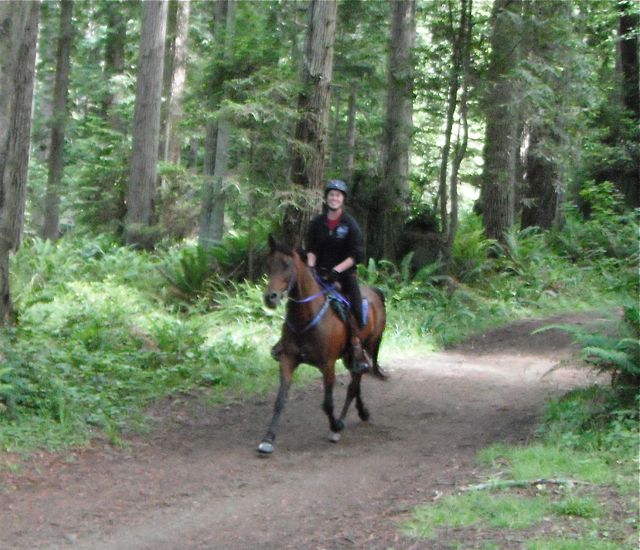 That’s an extended trot! I remember there were times at endurance rides, my 15h2 gelding would have to canter fast, to keep up with Choco in her motoring trot. She’s maybe 14h1 or 2. 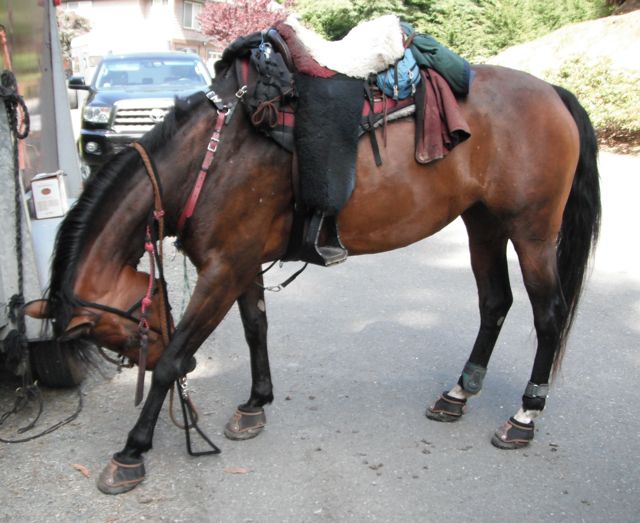 Itchy face after a decent ride. I think we were out for two hours, but plenty of hills in that time. What do you think? maybe a few millimeters came off that belly today? Maybe? 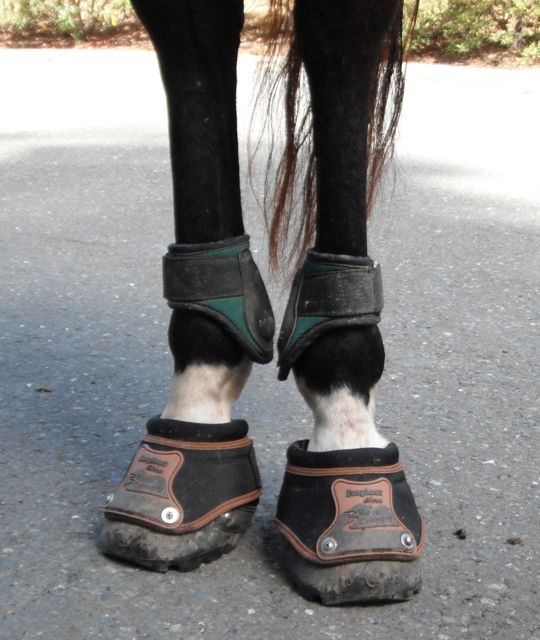 And those hind boots still are right where I put them: not a millimeter twisted. We still have to do the ultimate boot-failure test (lots of water/ mud water crossings, then trots and canters up hills), but so far I am amazed! These are the exact same size she wears in Gloves. I also want to experiment with a half size larger and putting comfort pads in them. They never budged and it seems like that extra gaiter shouldn’t matter that much, but somehow it seems to, even when you have user-error. 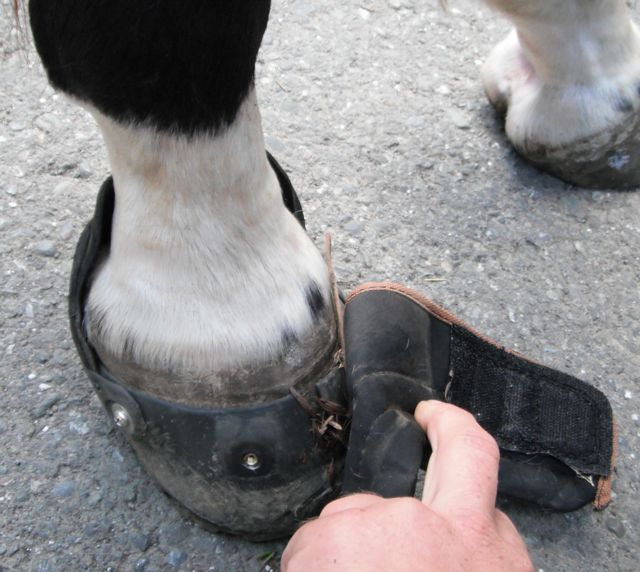 If you forget your own cardinal boot-rule: check all screws before riding, particularly with new boots straight out of the box because they can sometimes not as tight as they should be. 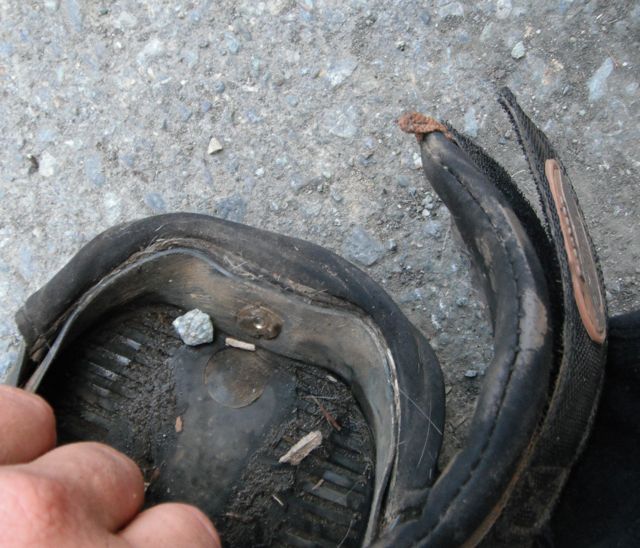 The only thing I didn’t like was that the boot had little rocks like this in it..right in the ‘divot’ between her heel bulbs on the skin above the coronet band. So they didn’t work their way down into the boot, just fell in when I took the boot off). I never have that happen in Gloves, so I am guessing that they can fall out the sides of the gaiters in the Glove, but with the enclosed gaiter of the BC, they  come in through the top, and can get stuck  in there. But if all else fails, one can always hop off and check/empty gaiters every now and then. We will see if this continues to happen, or was just a fluke.

Overall, Eowyn seemed to move great in them and they were not at all as bulky as they look. They feel lighter than Epics, and only a tad heavier than Gloves. There were no rubs and best of all, the boots did not budge, without having to spend time to sports tape them. So even if they don’t pan out for endurance rides (where taping is no biggy since I am out there all day long), they will likely be my favorite new training/trail riding boot. If they stay on as well with half a size larger, then I will be really happy, as I can then recommend them to my clients who don’t want to trim their horses as often as I would like.

Fitting the Back Country

The New Easyboot Back Country, Like a Fine Wine