I had the amazingly generous opportunity to ride one of Garrett’s horses, Belesemo Inferno, in the 50 at the Dynamite Dash endurance ride put on by Rusty Toth on February 27. This is the first year for the ride, and despite monsoon-type weather in Scottsdale the month prior to the ride, a change of ridecamp a week before and quite frankly a really scary weekend forecast, the ride went off without a hitch!

Rusty contacted me a few months ago to see if my husband, Robert, might be interested in vetting. Of course I said yes, so long as I could ride! I then convinced my husband it would be a great thing to do while we were on our annual migration south. Didn’t take much to convince him.

Garrett Ford quickly offered me a horse and we were all set! Being from the northwest, I am one of the few doing the “barefoot thing” in endurance. I was super excited to watch Mr. Easyboot himself apply the glue-ons to horses prior to the ride. I have been riding in Easycare boots for three years but have only been gluing boots for rides since last June. Considering we don’t have the option up in the NW for others to glue on for us, we have had to learn ourselves. I can tell you, it wasn’t pretty at first, but we got the job done! I was feeling pretty good about my glue jobs towards the end of last season, but watching Garrett and seeing his end product was the equivalent of thinking you sound pretty good singing in the shower and getting laughed off the audition stage at American Idol!

Friday afternoon I watched while Garrett apply boots to a few horses, one of which was our own Steph Teeter’s horse, Jaziret Bey Musc. Now Rhet is no newbie endurance horse. At almost 19yrs old, Rhett has some 4,000 miles including numerous fast 100’s and several years of FEI competitions. I haven’t seen Rhett since October, when he did his last NW ride with steel shoes. Steph pulled his shoes shortly after arriving in Arizona with the support of Kevin Myers. Rhett’s feet look AWESOME and I think Steph has been pretty pleased with his booted performance. I think we have another barefooter up here!
Boots were applied to a couple more horses, one of them being Clydea Hastie’s nice big bay gelding who was only three weeks out of shoes and who went on to tie for second place in the 100 the next day.  The other was one of Kevin’s horses, Redford, who has gorgeous bare feet!
It was fun watching, chatting and comparing methods. I love the ease at which Garrett prepares the foot and applies the boot. We talked excitedly about some new glues and the prospect of finding “the one,” the Holy Grail of glue if you may! Of course that being said, I am sitting here on my flight leaving Phoenix looking out at the engine compartment thingy which appears to have some type of Goober Glue/Adhere-type adhesive holding things together. Although this is freaking me out a bit, I can’t help but think we might need to consider checking that stuff out! 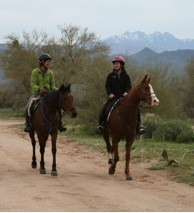 I could not believe the number of booted vs. shod feet at this ride. It was exciting and I think a preview of what to expect throughout the rest of the country in the near future. I believe 8 of the 12 horses in the 100 were booted!! None of them were pulled, and while I don’t recall anyone losing a boot, one did lose a shoe but went on to complete the 100 with the help of an Easyboot Glove. I had an awesome ride on Inferno, and got to spend some time with Easycare’s Miriam Rezine, who was fantastic to ride with.
We had a blast flying through the Tonto National Forest, lucky enough to see one of the most beautiful sunsets ever seen! Our horses were outfitted with glue-ons, applied with Adhere for me and a new glue for Miriam.  Their footfalls were familiarly softened by the rubber boots. I was thrown off several times throughout the ride by a familiar Northwest face among plenty of friendly strangers. From seeing Steve Bradley out taking photos, to riding with Steph and our favorite Canadian, Brian, and then seeing my husband vetting, I felt like the Northwest was plucked from the cold winter and transferred south!

These barefoot hoof horses are amazing.  They travel effortlessly over hard-pack road, fly over rock, glide through sand and then come to rest comfortably in their natural state after wraps are pulled and boots are removed at the completion of the ride.    I feel like I have come so far from the first time I awkwardly picked up a rasp four years ago. My husband was also excited to see all the barefoot/booted horses. He has patiently taken numerous radiographs so that I could check angles, depth of sole, length of toe and breakover of the various boots.
It is so exciting to see the amount of riders leaving their horses barefoot, and utilizing the tools available to cover the miles we cover without having to nail on steel shoes. I hope the revolution continues!
Thank you Southwest! See you next year!
~Amanda Washington