So, by now, we all know that the Easyboot Glove is only the best boot in the whole entire hoof boot world 🙂 Of course I may be partial, but I truly feel the Glove is the best option for my horses and the horses of many friends around me, both literally and figuratively.

We ride in the Gloves, we carry Gloves in our saddles and crew bags, we turn horses out in them when dealing with sore feet, and now, we use them as a tool for rehabilitation when the horse’s overall health and well-being relies on the boot for serious protection. 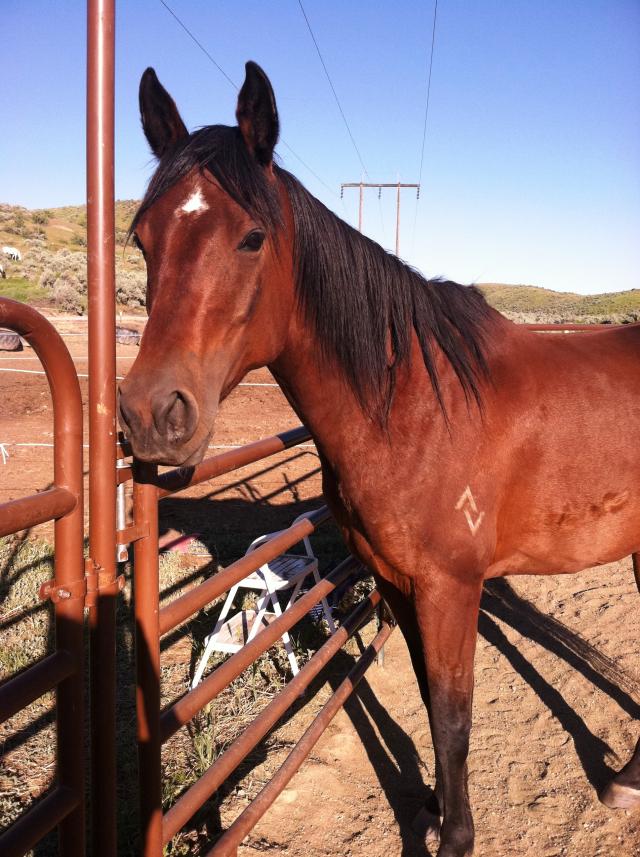 Last fall, my good friend’s super cool Quarab endurance horse, Rowdy, went lame. Right hind. A few weeks later, she found what looked to be a blowout from an abscess. Not thinking much of it, she kept the area clean and Rowdy came sound soon after. She entered a 50 mile ride and completed well, and shortly after that, our good friend left us like she always does, to travel to the Land of the Sun for the winter. Yes, she is one of the lucky ones that leaves the snow, sleet and rain to spend glorious “winters” in Arizona. Did I mention I sometimes hate her?? 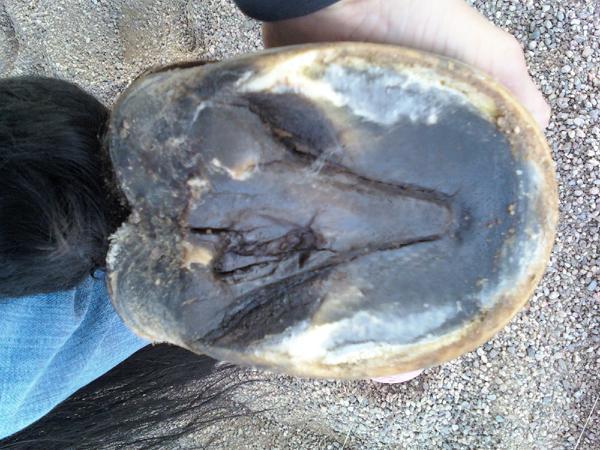 This was the second abscess blow-out while in Arizona. You can see how substantial it was.

A few weeks after arriving in Arizona, Rowdy went lame yet again. It appeared that another abscess in the same spot on the same foot blew out again. This time there was lots of black gunk and that appeared to be a pretty deep hole. She took Rowdy to a vet in Arizona, who looked at the horse and shrugged her off. Apparently thrush isn’t a big thing in Arizona! Rowdy again came sound and went on to complete another 50, but before heading to Cuyama, he was off again. She skipped the ride and came home (YAY!!!) and immediately had Rowdy looked at by her regular veterinarian. This vet also happens to be my husband, which is incredibly convenient at times! After doing a bit of digging, Robert found a tract into Rowdy’s foot, through the frog. This was caused by the abscess which left a necrotic draining tract that either was not able to completely heal, or had a foreign material in it. They decided that doing surgery to completely clean out all the necrotic tissue in the frog was the best plan of action. 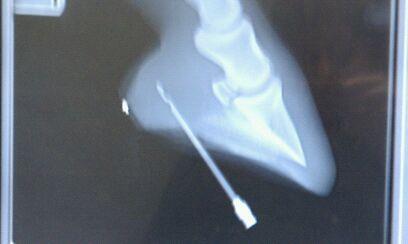 Radiograph prior to surgery 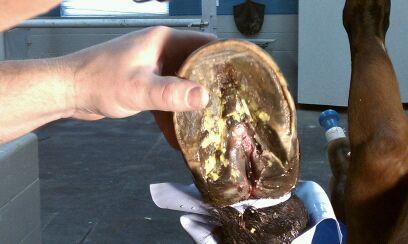 Cleaning out the bad tissue

Rowdy had surgery April 15th. They cut open the frog, injected a radio-opaque dye and using radiographs to see where the tract went,  cut out all the necrotic tissue following the tract. Gross, huh? Well considering the surgery cut out a substantial amount of live tissue and left an open window to prevent the foot from closing back over before it was able to heal from the inside out, it was IMPERATIVE that the foot stay completely covered and protected. The surgeon on the case wanted a shoe with a hospital plate put on the foot to protect the sensitive, open area and prevent concussion. Considering Rowdy is a barefoot horse, my friend was hoping something else could be used. Thankfully, Robert is extremely familiar with the Easyboot Gloves and felt that there was no reason we couldn’t use a Glove as you would a hospital plate.

A hospital plate is bar shoe with either a hard plastic or aluminum plate that is bolted to the shoe. You can then unscrew the plate, treat the foot, and put the plate back in place to protect the foot. Well, you can do the same with a Glove.

Rowdy wore his Glove every single day, 24/7 for six weeks. At that time, his foot started to heal well, and he has since been able to go without his boot when things are dry, and then back into the boot when his foot needs to be treated. Rowdy had no rubbing and only lost his boot once, when he was still in a thick pad (diaper) and a boot two sizes up to accommodate the extra padding. The boot has protected his open frog, held the packing and medicine in place and kept the sensitive tissue off the ground. All without steel or nails and bolts or screws. Rowdy has since been allowed to start taking his mom out for rides (in all four of his Gloves, of course!) and has shown everyone just how good he feels and how STUPID it is to keep him in lockdown! 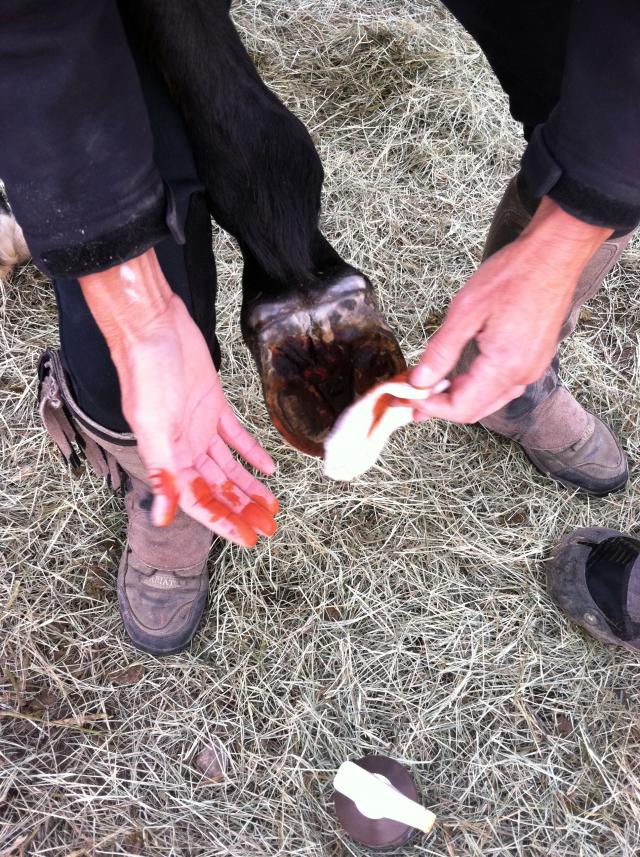 Packing Rowdy’s foot with 7% tincture of iodine (The red is NOT BLOOD!!!) 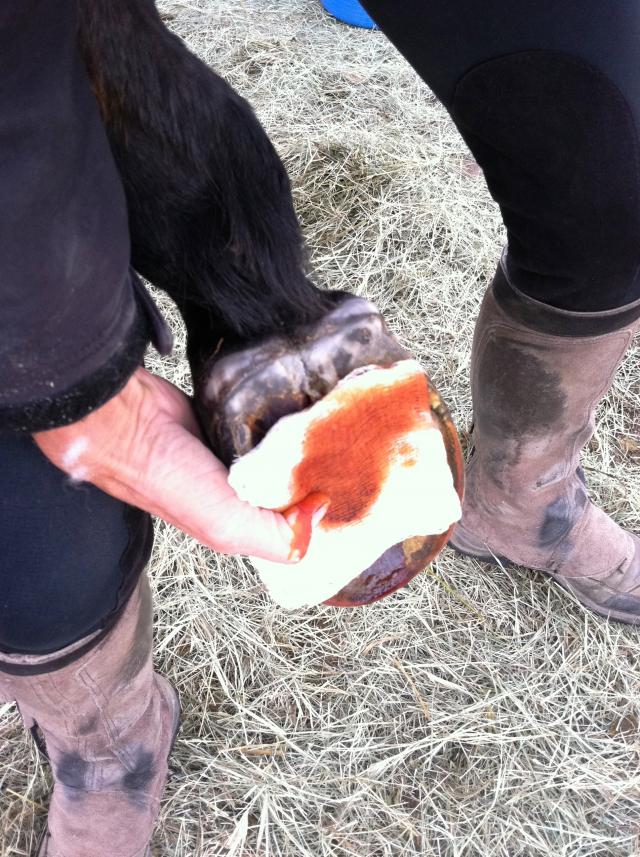 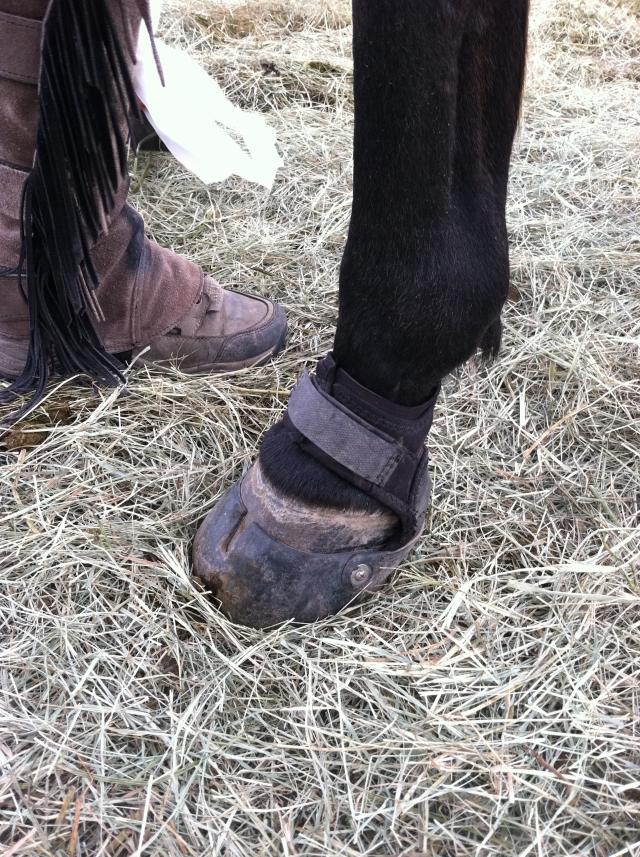 Rowdy in his “Hospital Boot” 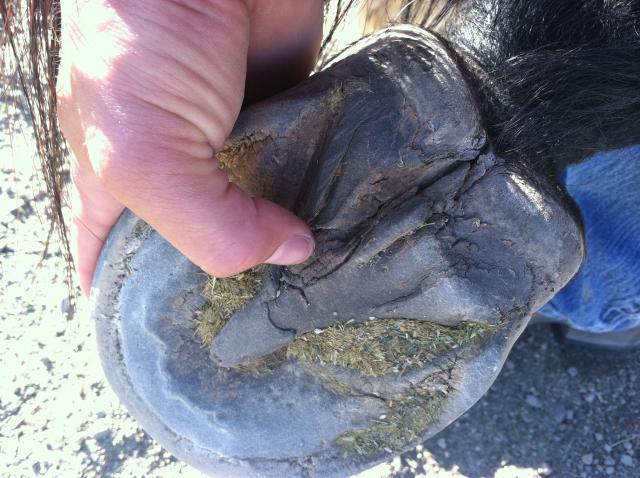 Thank you, Linda, for letting me share your story! I am still hopeful that more and more veterinarians across the country and around the world will consider alternative options to steel horseshoes for their clients who are willing to go the extra few steps in using hoof boots. This was an excellent example of thinking outside the box and going against the “norm.” So far, so good, and we hope Rowdy continues to heal and gets back to some endurance rides. He needs some miles! 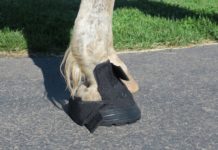 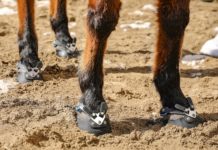