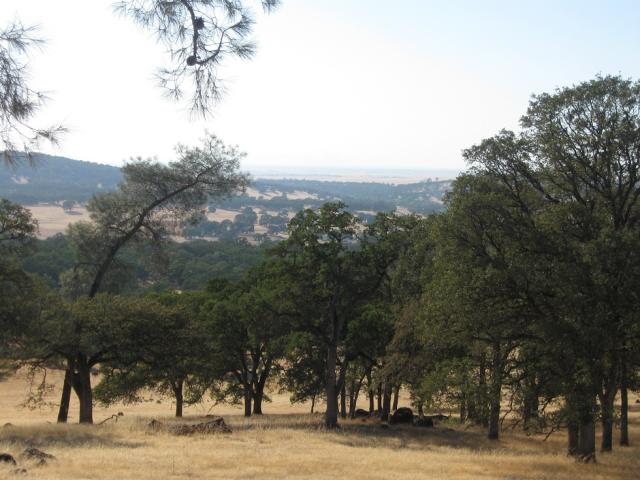 The title of this ride story was almost going to be, “Epic Fail” (pun intended). I feel like the last three 50’s I’ve done, I’ve really had to earn my completions. That probably means I’ve gone to each ride a little less prepared than I should have. At Gold Country, I took Rosie on six-week old shoes and not surprisingly, she lost both front shoes and had to finish in Easyboot Gloves. 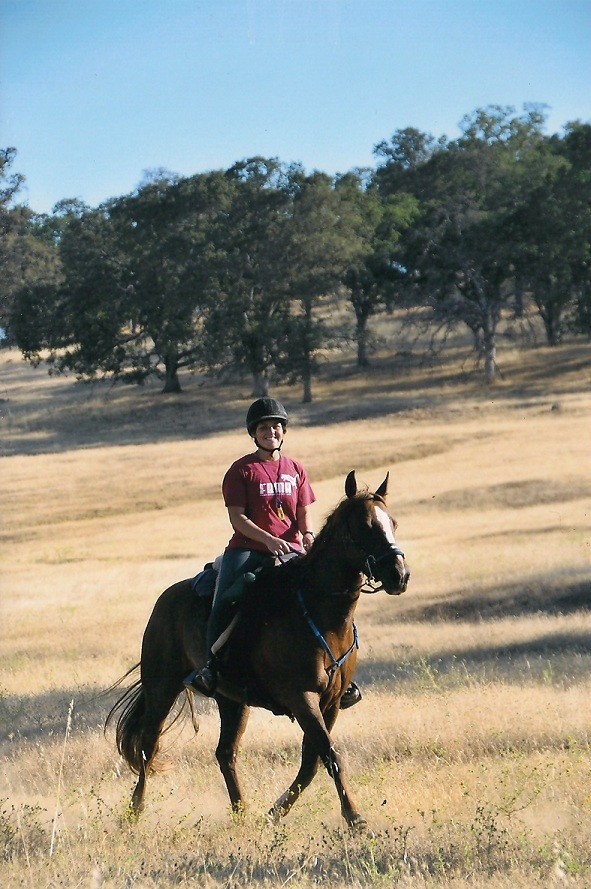 At Oregon Outback, I drove my exhausted self 8 hours to the ride after three night shifts in a row and just two hours of sleep. As a result, poor Little Bit had to pack my floppy-ankled, worthless body the last half of the ride. And at Camp Far West, I took Brandy, who’s only been barefoot/booted for five weeks (after having four months off), and ended up having to work out those routine boot fitting struggles out on the trail without proper supplies or properly fitting boots. Somebody apparently missed Endurance Preparedness 101.

Brandy is a very strong girl and even though she wasn’t exactly super fit, I felt confident she could do a 50 as long as her feet were in good shape. I had set her up with Easyboot Epics and 12 mm comfort pads which she absolutely loves. She must feel like she has Air Jordans on because she just floats over rocks when she has them on. Don’t take that the wrong way–I’m still very cautious over rocky terrain. 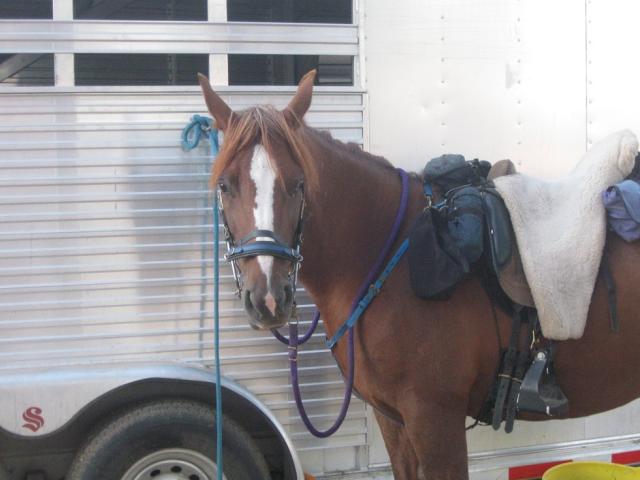 I also had a pair of Gloves that sort of fit her fronts if I use enough athletic tape, but since I could only use 6mm pads on those, I was preferring to use the Epics. Right now sole protection is my biggest concern for Brandy. I’m thrilled that Epics seem to work like magic for Brandy but I spend a great deal of time cussing while trying to apply them, especially with the 12mm pads. The pads get in the way of the heel strap so I don’t feel like I have a great fit, but after she’s worn them for a training ride or two, the pad smooshes down enough that it doesn’t interfere with the heel strap as much. During our 34 miles of booting experimentation/trail riding at Cuneo Creek last weekend, I determined that her Epics stay on best with a couple wraps of athletic tape.

Thankfully, so far, she’s had absolutely no signs of rubbing with the new or old gaiters. In preparation for our upcoming ride, I had Russell pick up a few rolls of athletic tape to take to CFW. It wasn’t until I got to the ride that I discovered the people at Big 5 had actually sold him vet wrap for humans. It was black and in the same packaging that the athletic tape comes in, so I didn’t even notice he got the wrong stuff. Oops. But then I reminded myself that shoot, people have used vet wrap under Easyboots for years, right? Back when I used to ride Sere with shoes + boots, I always wrapped her feet in vet wrap first. And Epics are more like regular Easyboots anyway, so surely the vet wrap would achieve the same result as the athletic tape would. Not. 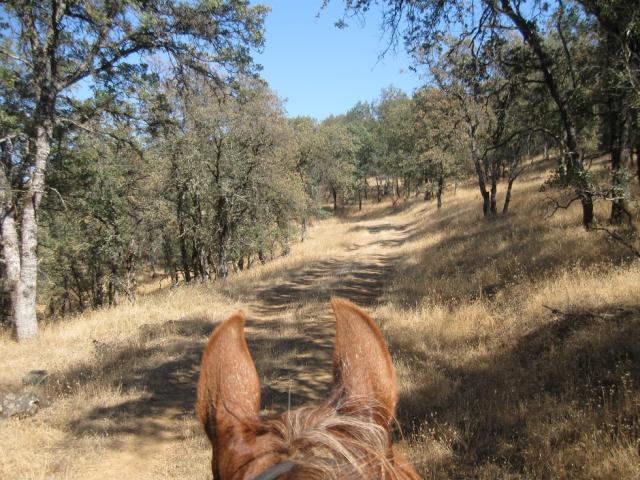 Her gelding apparently thinks he’s still a stallion most of the time so she was surprised that he behaved himself so well sharing the trail with the voluptuous Miss B. We really enjoyed riding together and the entire first 20 miles, I kept wondering what Lucy was talking about when she said this ride was boring. When you’re used to riding in the redwoods, it’s kind of nice to ride through some open country with rolling hills and pretty views.

We made it through the first loop without any boot issues at all. Brandy felt great and vetted through the first vet check with a 48 pulse. I’m still getting to know her, so I wasn’t really sure how much to expect her to eat or what she prefers to eat at vet checks. Little Bit usually prefers hay at vet checks instead of grain and since I haven’t been feeding much grain, I only had packed a small amount that Brandy completely inhaled at the first vet check. I’m also not sure if she’s a horse who needs a lot of elating or just a little, but since she sweats like a beast, I assumed she might need more than most. 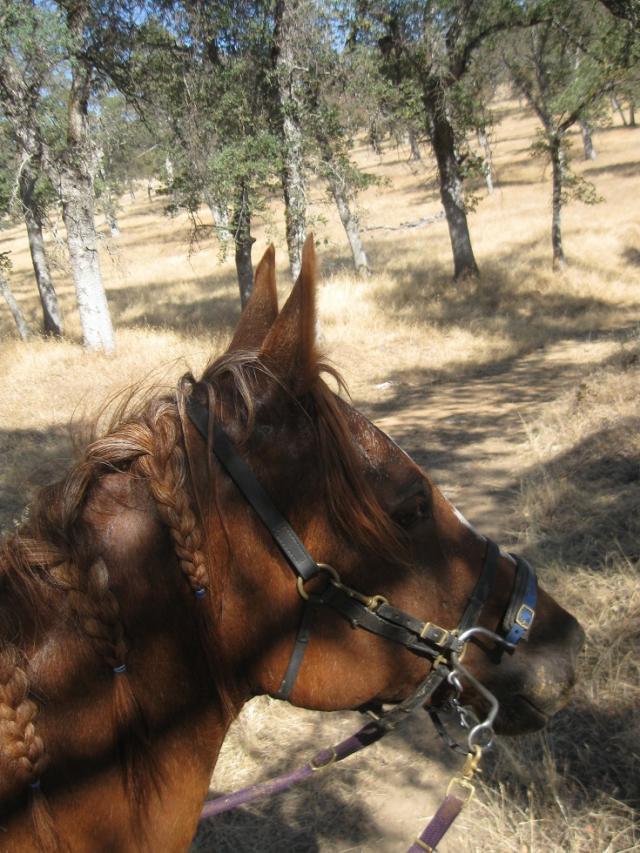 Stopping to puff in the shade.

By the time we left for the second loop, it was getting hot. Someone said it got up to 102 on Saturday. Our riding partner, Diane, informed me that she prefers to go “5 mph on the first loop, then faster on the second loop, and then pretty much canter the last loop.” Since this wasn’t the pace I’d planned for Brandy and me, I let Diane go on ahead which completely upset Brandy.

She forgot to watch where she was going and the more I tried to collect her, the more she’d root with her head and get heavy on her front end. Not a good set-up for a horse who tends to be a little trippy. And just as I feared, as we were walking down a big, wide gravel road, I asked her to stop for a second so I could lean forward and give her a carrot. I must have thrown her off somehow by bringing her head around and leaning forward because just as I leaned forward, she tripped big time and almost went completely SPLAT on the road.

I looked down to see her left front knee bleeding like a faucet. I hopped off and stared at it bleeding for a second. Her white sock was now red. I couldn’t believe it was bleeding that much. After a moment of standing there with my mouth open, my common sense kicked in and I took my shirt off (thankfully I was wearing two shirts. Lucy had instructed me to do so I could dunk my shirt in the creek to cool off and applied pressure.)

Of course, Brandy had a different agenda and wanted to keep going down the gravel road. After a short discussion (okay, it was borderline domestic violence), Brandy agreed to stand still while I doctored her. It took at least five minutes for me to get the bleeding stopped. Once it stopped oozing, I was able to determine that it wasn’t a very big laceration and it didn’t look very deep. I slathered it with desitin and hoped that Brandy’s mustang toughness would be on our side and off we went. She felt sound but I was still worried that she’d get sore at some point during the ride.

The scenery on the second loop was less interesting than the first loop. We mostly followed fence lines and while parts of it were cool little cow trails through the grass, in some parts the trail would disappear and we’d have to go cross country through a field of star thistle. I kept picturing those little stickers getting into Brandy’s gaiters but somehow that never happened.

About 5 miles from camp on our 22 mile loop Brandy did a tiny little trip and I heard the clunk of a boot coming off, accompanied by the “rrrrrrriiiiiiiiiip” of a gaiter. I looked down to see her LF foot naked with just a lonely little gaiter still velcroed around her pastern. Looooovely. The only spare boots I had with me were 0.5 Gloves (too big) with 6mm pads in them. Oh, and the vet wrap.

Suddenly that vet wrap was looking pretty perfect. I did three wraps of it, slapped the glove on, said a little prayer, and off we went. I should also mention that the spare Gloves came complete with broken power straps. I’m no expert, but I’m pretty sure they don’t work as well when they’re split down the middle.

Now Brandy was trotting down the trail with one Easyboot Epic +12 mm pad and one Glove + 6mm pad. The worry wart in me was certain that this would cause a problem. 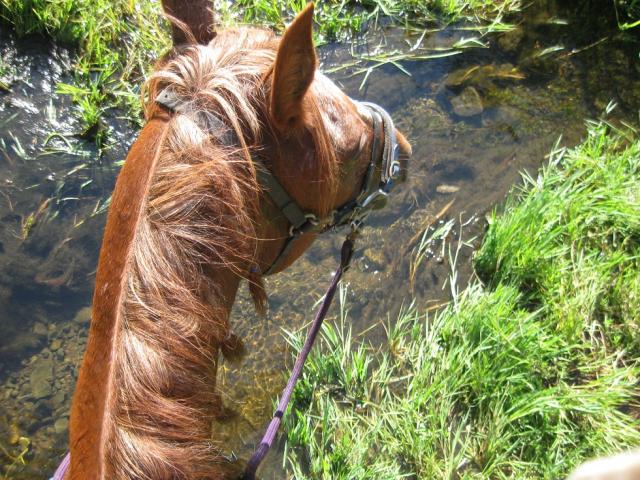 We spent a lot of time dunking out entire bodies in the creeks along the way.

By now it was really. really. really hot. I felt okay as long as I kept dumping water on myself and on Brandy. According to my HRM, she was doing fine, but if you asked Brandy, she’d say she was getting hot and tired. She vetted through the second vet check with A’s again but this time her pulse didn’t drop like a rock. She hung at 56-60 for a little while which I knew wasn’t normal for her. Our second hold was only 15 minutes but I stayed probably 45 minutes and spent a lot of time cooling her and letting her eat. She was drinking well now and I wasn’t worried about her metabolically, but I knew she was tired. 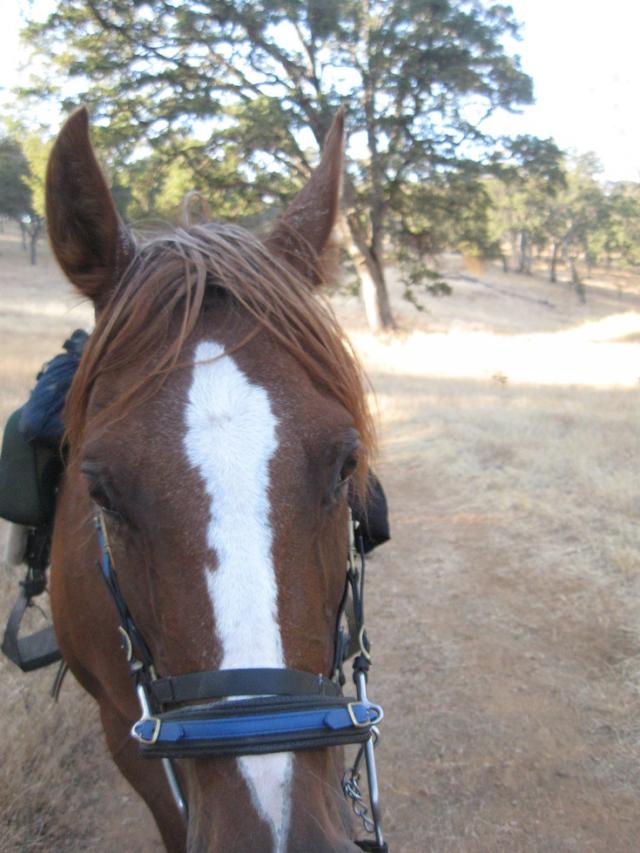 Leading Brandy down one of the last hills. I love this face.

The last loop was 10 miles and we had about 3 1/2 hours to do it so I knew we could take our sweet time. Before we left the vet check, I removed her remaining Epic and put her in Gloves + vet wrap + broken power straps on both fronts. We looked like such booted amateurs!

Brandy was still feeling really solid so I was happy, but feeling bad for pushing her a little more than she needed to be pushed. She’s such a tough mare and she really doesn’t complain. Let’s just say I’m totally in love with her :)).

The last loop had one hill that felt like it went on forever. We’d stop here and there to graze and puff in the shade and take photos, and once again spent a lot of time cooling off in the creek. We met a nice lady, Serena on a pretty grey who was doing her fourth 50. They ended up riding in with us for the last couple of miles so I had to look the other way when I was getting all choked up about Brandy. Brandy finished looking tired but overall really good. Lindsay Graham said her gut sounds and recovery were better than most horses she’d seen all day and she said Brandy looked solid on her trot out. 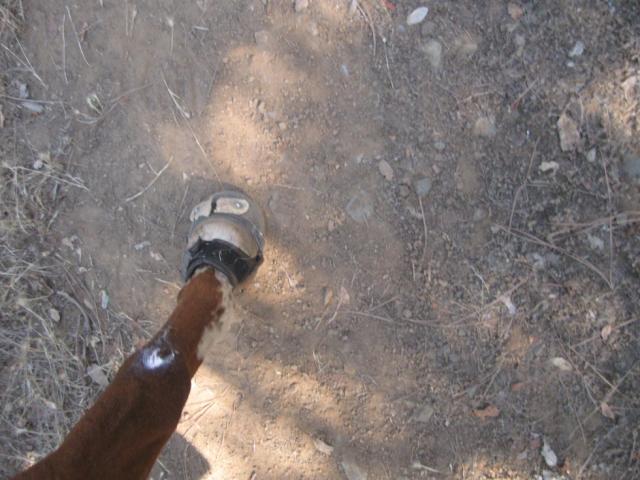 I guess considering how unprepared we were with boots, the ride went really well. I’m really grateful for the support from those who encouraged me to pull Brandy’s shoes and try to transition her back to bare. 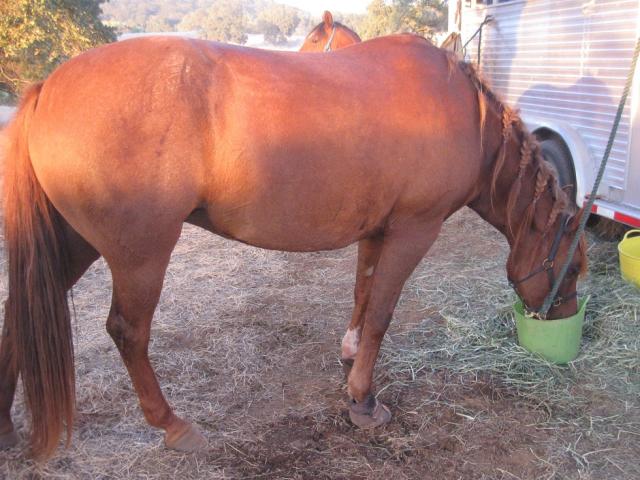 Replenishing after the ride. I’m so proud of her.

Five months ago I was saying that there was no way Brandy would ever be barefoot ever again. For now, at least, I think that Epics +12mm pads are the way to go for her. She loves them. Hopefully as she transitions more and grows thicker, stronger soles, I can start using Gloves instead. Her feet have a long way to go, and I have a lot to learn about trimming, but I think we’re well on our way.